Two sisters have been diagnosed with a rare brain disorder that causes repeated stroke due to blocked arteries in million-in-one odds.

Doctors said she had suffered multiple strokes caused by moyamoya syndrome because blood vessels in her brain had narrowed.

The same day she was diagnosed, her younger sister Katrina, 25, lost feeling in her right arm and her face began drooping – which was discovered to be caused by the same disease.

The sisters are not of East Asian descent – in whom the syndrome mostly occurs – nor do they have any history of the condition in their family, leaving their doctors to believe their cases are just an improbable rare coincidence.

Katrina and Tasha Baldwin, 25 and 27, of Baudette, Minnesota, were both diagnosed this year with a rare blood vessel disorder known as moyamoya syndrome. Pictured, left to right: Tasha, Katrina’s daughter Karley, and Katrina 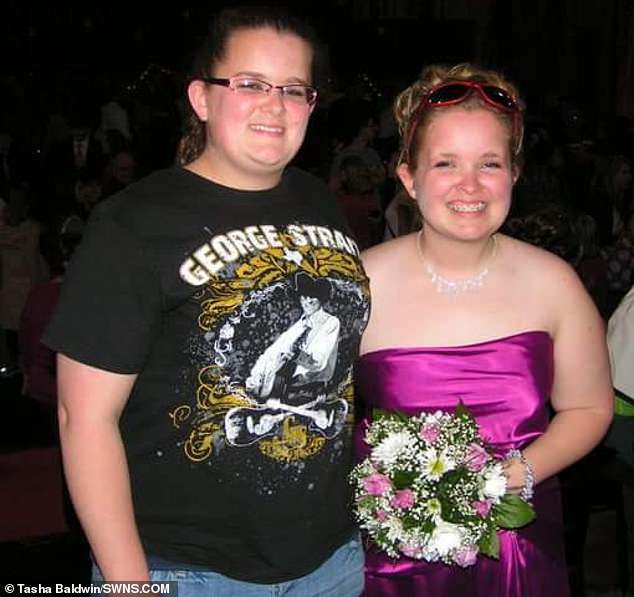 The syndrome occurs due to blocked arteries at the base of the brain that restrict blood flow and could trigger a deadly stroke. Pictured: Tasha, left, and Katrina

Moyamoya syndrome is a rare and progressive blood vessel disorder that begins at base of the brain in an area called the basal ganglia.

Small blood vessels in this region that supply the brain with blood become blocked or narrowed, which causes damage to the brain including strokes, aneurysms or bleeding.

If a stroke causes intracerebral hemorrhaging, or bleeding within the brain, moyamoya can be fatal.

Symptoms include headaches, seizures, difficultly speaking, weakness or paralysis on one side of the body.

The exact cause is unknown but, because it is most common in East Asian countries, – mainly Korea, Japan and China – it’s believed the disease is genetic.

In fact, ‘moyamoya’ translates to ‘puff of smoke’ in Japanese, because this describes the appearance of the small blood vessels.

WHAT IS MOYAMOYA SYNDROME?

The disease is a rare disorder affecting the blood vessels at the base of the brain.

It causes the arteries supplying the brain with blood to narrow, thereby restricting blood flow to the brain.

The condition can cause a mini stroke, also known as a transient ischemic attack (TIA), as well as a stroke.

The disease mainly afflicts children, but adults can also suffer the condition.

A TIA is caused by a temporary disruption in the blood supply to part of the brain.

It results in a lack of oxygen to the brain.

It can trigger symptoms similar to a stroke, such as speech and visual disturbance, numbness or weakness in the face, arms and legs.

However, a TIA does not last as long as a stroke, the effects only last a few minutes or hours, and fully resolve within 24 hours.

Moyamoya affects just one in 1.1 million people in the US, and mainly women.

Tasha said that prior to being diagnosed, she had never heard of the disease before.

‘The doctors looked into our family history, and there isn’t anything that would have caused us both to get it,’ she said.

‘My one and only symptom was that my arm went numb. It started tingling and it felt like dead weight when I would try to do simple tasks.’

Katrina, who is engaged to fiancé Chad Weise, 27, and has a two-year-old daughter named Karley, said her symptoms came on at random.

‘My arm went numb, and my face went numb and started drooping. I tried to smile and I couldn’t,’ she said.

‘It affected my right side, and then my speech went. I was mumbling and slurring, and I sounded drunk.’

In at least half of all known cases of moyamoya, the disease has no identifiable cause, according to Boston Children’s Hospital.

Dr Michael Manchak, a vascular neurologist who treated Katrina at Sanford Health in Bemidji, Minnesota, said the likelihood of two sisters having moyamoya is ‘extremely low’.

‘It’s a very unusual disease to see here in North America,’ he said.

‘The likelihood of this happening to two sisters at once is well under one percent – it’s extremely low. It’s unusual in the first place for two sisters to have it, but what’s more unusual is the timing of it all. I think it’s essentially just a coincidence.’ 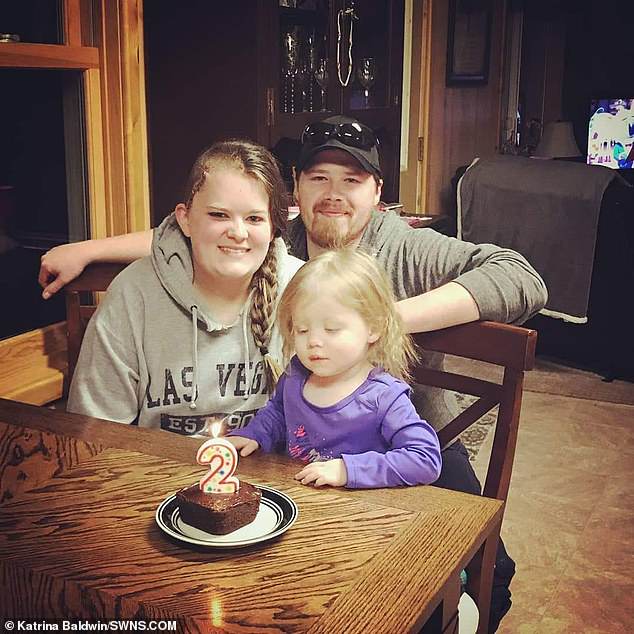 Neither sister is of East Asian descent, in whom the syndrome most often occurs, nor do they have a family history of the condition. Pictured, left to right: Katrina, her daughter Karley, and her fiancé Chad Weise, 27 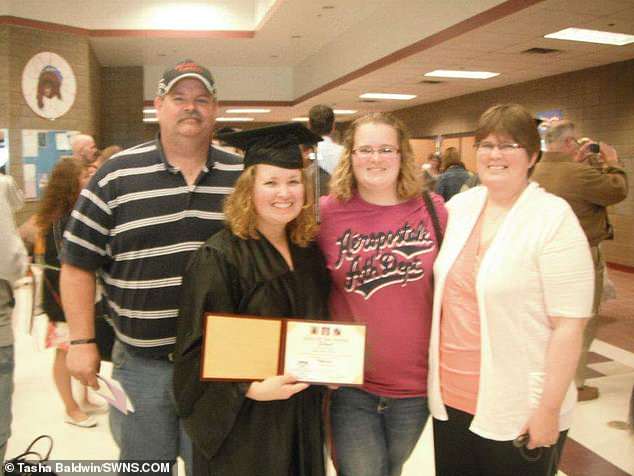 According to Katrina’s doctor, ‘the likelihood of this happening to two sisters at once is well under one percent’. Pictured: Tasha and Katrina with their parents at Tasha’s graduation 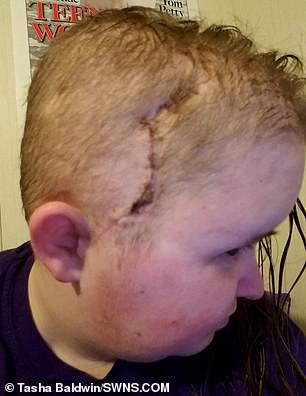 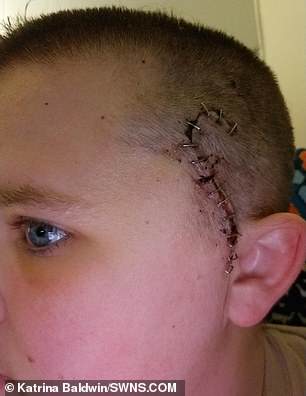 Both sisters went to the Sanford Neuroscience clinic in Fargo, North Dakota, to undergo surgery to bypass their blocked arteries and restore blood flow to the brain. Pictured: Tasha, left, and Katrina, right, bearing scars after their brain surgeries

According to the National Institute of Neurological Disorders and Stroke, sufferers will experience multiple strokes and mental decline without surgery as the arteries continue to narrow.

There are several surgeries which either open narrowed blood vessels or bypass blocked arteries to restore blood flow to the brain.

Both sisters later went to the Sanford Neuroscience clinic in Fargo, North Dakota, to undergo surgery.

One day after her diagnosis in February, Katrina had surgery to bypass the clotted artery in her brain and restore blood flow. Her second procedure was on May 29.

Tasha’s first surgery was on March 8 and her second, to treat the left side of her brain, was on May 15.

‘If I didn’t have the surgeries when I did, I would have had a major stroke and I wouldn’t be here today,’ Tasha said.

‘It was awful knowing that Katrina was sick too, but at least we could ask each other if we were having the same problems. I’m the older sister, so I was scared for her.’

Katrina added that she was grateful she had someone who could understand what she was going through.

‘It’s pretty crazy that my sister went through the exact same thing, but we were both happy to have someone to go through it with,’ she said.