Six months in a leaky boat. Why the New Zealand Warriors are the WORST defensive side in the NRL

When iconic Kiwi band Split Enz penned their hit song Six Months in a Leaky Boat, they might as well have been singing about the current New Zealand Warriors NRL outfit.

While Souths won 32-30 in their NRL clash in Magic Round, there is unlikely to be a ticker tape parade at Redfern after the Rabbitohs allowed a flurry of tries in the dying minutes as they clocked off completely.

It was a dramatic finish as Shaun Johnson attempted a two-point field goal and the Warriors challenged after the siren, looking for an accidental offside to get a shot at goal to tie up the scores.

But the damage had been done and now the Warriors are officially dead last in the NRL defensively and never deserved to get as close as they did.

‘Glad we could fight back and make a contest of it, but man, our starts, we just can’t give sides those kinds of leads,’ Johnson said.

‘It was the Rabbits of old … the way we played in that second half,’ Bunnies captain Cody Walker conceded.

The match appeared dead and buried by halftime when the Bunnies were up 26-0 while the fumbling Warriors had 21 missed tackles. They finished the game with a total of 38 misses.

Makeshift hooker Jazz Tevaga had a night to forget, rattling up four missed tackles while also limping off the field with a knee problem in the first half.

Tohu Harris was supposed to be a huge inclusion for the Warriors, playing his first game of the season after returning from a serious knee injury suffered last July.

He might be going straight back to the stands after being put on report for a lazy late and high shot on a Souths player.

Five minutes of being on the field and Tohu Harris doing his best to get back off it.

The biggest flunk of the day came from new recruit Freddy Lussick, who was shipped to the club from the Sydney Roosters.

He was sent out to replace Tevaga but had a miserable night in defence with a staggering five missed tackles, although the hooker was forced to make 41 tackles as the rampaging Souths forwards routinely targeted him.

It was not an isolated instance or a one-off bad night at the office. The Warriors have routinely proven to be shocking in defence this season.

Last week, the Warriors leaked 29 points against a Cronulla side playing with 12 men for most of the night – 11 men at the end.

The Melbourne Storm pumped the Warriors by a record 70-10 on Anzac Day.

Unless the Dragons bungle over 30 tackles in their match this weekend, the Warriors will remain dead last in the NRL when it comes to missed tackles.

Still, Souths fans will no be doing cartwheels over the win. After putting together a seemingly insurmountable lead in the first half, they put the cue in the rack. 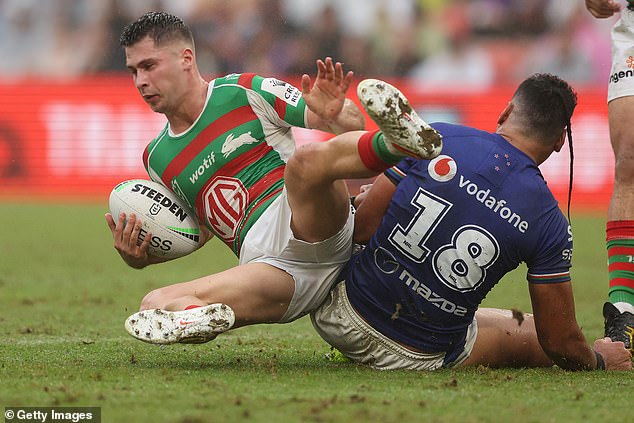 There were 38 missed tackles in the loss against South Sydney, making the Warriors the worst defensive side in the NRL

There were some nervous moments in the final five minutes when hooker Damien Cook was sin-binned for taking Shaun Johnson out as he attempted to score a try.

Coach Jason Demetriou will likely be furious at his side’s Dr Jekyll and Mr Hyde performance.

Cody Walker showed moments of brilliance in his first game as captain and laid on three of the first half tries. But he was one of the players guilty of going missing in the second half.

The Rabbitohs will also be sweating on the fitness of forward Jacob Host. He dislocated his right shoulder two weeks ago and re-injured the shoulder against the Warriors.

‘He will be looking to at a longer stint on the sideline, maybe surgery, given how unstable that shoulder is,’ sideline reporter Lara Pitt said.