Simone Burns outside court this afternoon

An international human rights lawyer who launched a shocking drunken racist tirade on a plane where she spat at a flight attendant has been jailed for six months.

Simone Burns, 50, from Hove, known as Simone O’Broin was arrested in November 2018 after she abused Air India staff on a flight from Mumbai to London.

She pleaded guilty to assault, and to being drunk on an aircraft, at her trial last month.

Today at Isleworth Crown Court in London the judge sent her to prison for six months for being drunk on an aircraft, with an additional sentence of two months for the assault to be served concurrently.

He told her she had been ‘abusive, contemptuous, confrontational and used appalling language.’ 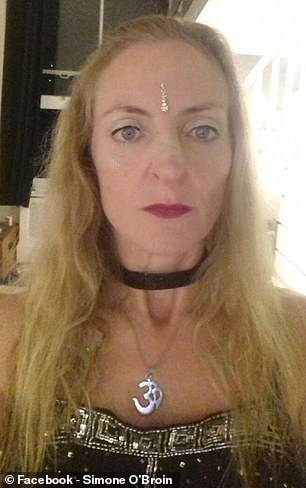 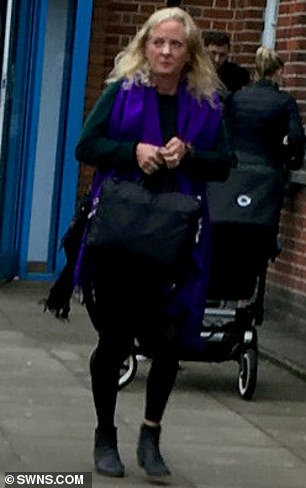 Simone Burns (pictured right leaving Uxbridge Magistrates’ Court today) was arrested in November 2018 for abusing Air India staff on board a flight. The 50-year-old (left) had spat in the face of one flight attendant 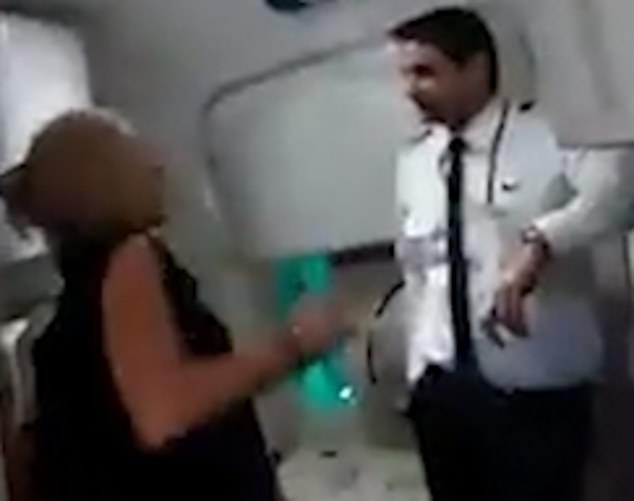 Abuse: Video footage shows Burns, who claims to be an international human rights lawyer, swearing at an Air India staff member on a flight from Mumbai to London Heathrow

The rant: What Burns said in four-minute long drunken tirade at crew and passengers

Simone Burns, 50, was already on her feet and swaying by the time the camera started recording. This is what it captured:

‘Who are international criminal lawyers for the Palestinian people.

‘Who are actually working for your.. All you.. Oh you’re the captain aren’t you.

‘You’re the captain. I’m working for all your people.’

She steps forward to the captain and leans in until her nose is almost touching his.

‘For you. International criminal lawyer.

‘Don’t get any money for it by the way’, said Burns, in Business Class.

‘So you can’t give me a wee bottle of wine, [bleeped]’ 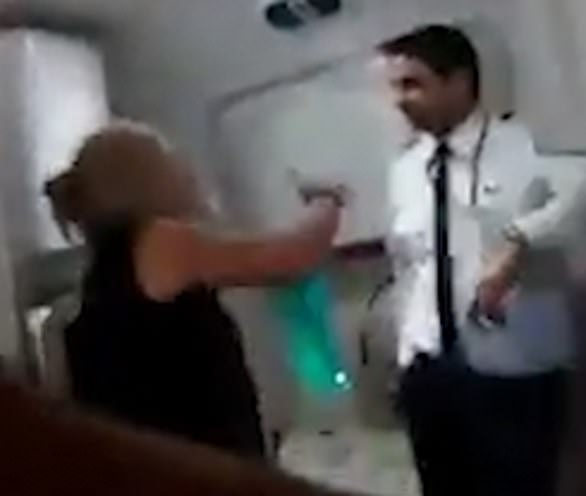 She then sticks her head around the corner and starts swearing at fellow passengers in a largely indecipherable rant, before continuing.

‘So this is the report you’re going to write about me is it? I’m a f****** international criminal lawyer, and a barrister.

Her speech then becomes so slurred it is almost impossible to make out, before she says ‘rich Indian [bleeped]’ and ‘money-grabbing c****.’

Striding back towards her seat, she lashes her arms out wildly and shouts again: ‘Give me a bottle of wine and get him over.

‘Otherwise, when we arrive in…’

The camera stays in position near the staff as Burns continues to rant, almost out of earshot, in the cabin.

Then she can be heard to say, to a fellow passenger: ‘Speak to the police? Are you f****** joking me? I’m a f****** barrister. A human rights lawyer, and an international criminal lawyer.

‘For the f****** Palestinian people. You think I’m scared, you threaten me with [bleeped]. You’ll be standing on your [bleeped] heads.

‘You said police are going to touch me at Heathrow Airport. Well [bleeped] coming yeah?

‘Got it? Got it?’ she shouts, ‘Everyone in this [bleeped] deaf? Anyone developed any balls recently?

‘All do it all myself for you all shall I? Shall I? The Rohyinga the f****** Quechua, the indigenous peoples, and all the peoples of the world.

‘And any time you can go, well we’ll sort it out.

Finally she screams hoarsely: ‘We- you’re pathetic’, before mumbling ‘don’t think I approved everything I say [bleeped]’ and collapsing into her seat.

Incredibly, none of the other passengers interrupted her. 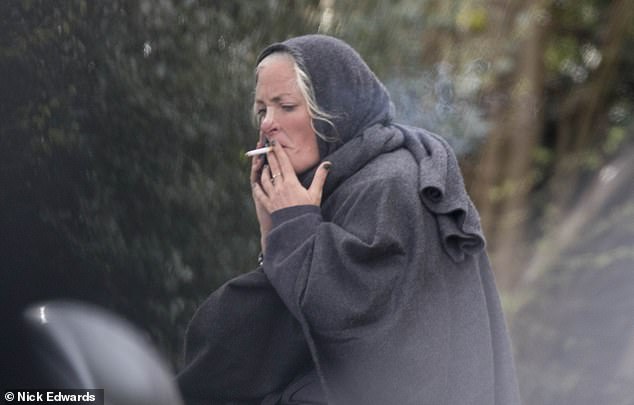 Burns was sentenced at Isleworth Crown Court today (pictured today). Magistrates at her trial said her sentence should be greater than any they could impose

Belfast-born Burns arrived at Isleworth Crown Court for sentencing today wearing a black suit and shawl, and a bandage on her nose as a result of skin cancer she has had for 18 years. She put her head down as the video was shown in court.

Caroline Paul, prosecuting, said that after Burns complained about her television: ‘When cabin crew tried to assist she started shouting ‘f***ing Air India as usual’ and then she stuck her middle finger up at cabin supervisor Dastur Pervin and told her to f*** off.

‘Another passenger said Ms Burns was asking for alcohol and being very abnoxious so staff served her with three bottles of wine – this was just one hour into the flight.’

Burns continued to swear in her seat and then got up to go to the toilet where she attempted to smoke twice – and managed to light a cigarette on one occasion.

Burns continued ranting and swearing and after she was refused more wine – which she demanded in lieu of dinner at 9.30am – she spat in Ms Pervin’s face.

Ms Paul said: ‘She stood right in front of her and told her to get her a drink – then she stools back and spat in her face. Ms Burns the grabbed Ms Pervin’s upper so much that she felt pain.’

Another staff member, Mr Bansol, said Burns was the ‘most obnoxious’ passenger he had ever seen.

Ms Paul said: ‘Mr Bansol said she was aggressive and volatile for the whole nine hours – he had never witnessed a passenger so obnoxious.’

When police at Heathrow came to haul Burns off the flight, she had an unlit cigarette in her hand and ‘stank of alcohol.’

Burns, who was called to the bar in the UK but works abroad, mainly in Palestine, had learned that her uncle had died in Ireland and she had missed the funeral.

Mark Kimsey, in mitigation, said Burns now lives like a hermit and doesn’t leave her home after ‘trolls’ had threatened to kill her online.

He said: ‘She accepts responsibility for what happened and is very ashamed as to what took place – she recalls very little of the incident.

‘When she watched the footage for the first time she was sobbing because of what took place.’ 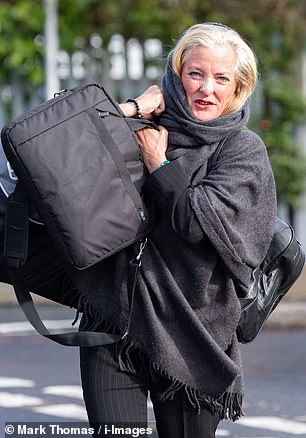 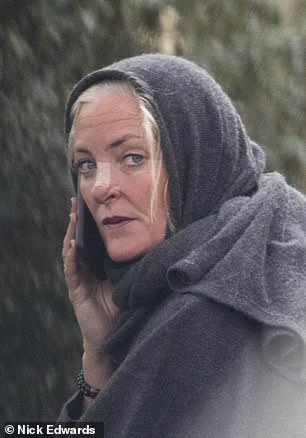 Burns arriving at Isleworth Crown Court today, and outside during a break in proceedings

He suggested the offence was not racially aggravated and that Burns was simply ‘ranting about all she does for people’ but the judge rejected this.

Judge Nicholas Wood said: ‘The experience of a drunk unrepentant irrational person in the confines of an air craft is frightening not least on a long haul flight and poses a risk to safety.’

He added although the air craft was not at risk by Burns’ behaviour, ‘there is no escape at 3000 feet’.

He said: ‘To spit in a cabin crew member’s face at close range is insulting and upsetting. Another member of staff said in his 34 years of work he had never been treated that way by a woman.

‘I’m satisfied that this offence was racially aggravated but that it was not meant at all.’

He said Burns was of ‘impeccable character’ but added: ‘The fact remains you were abusive, contemptuous, confrontational and used appalling language.

‘You tried to smoke in the toilets I believe three occasions and were successful at least once. In my view there can only be a custodial sentence.’

Burns was jailed for six months for being drunk on an aircraft, and also sentenced to two months in prison for the assault, to be served concurrently.

She was also also ordered to pay £300 compensation to Ms Pervin.

The 50-year-old shouts at a female member of staff, threatening to take her to court unless she is given a bottle of wine, claiming to be a f***ing international lawyer and a barrister’

On her flight last year the business class passenger demanded to speak to the pilot, and ranted and swore at him while so drunk she was swaying on her feet and staggering back and forth, after cabin crew denied her a fourth bottle of wine.

She was initially served three bottles of wine but declared ‘I’m a f****** international lawyer’ when she was denied more on Air India flight AI131 from Mumbai on November 11 2018.

She also called staff ‘Indian money-grabbing c****’ and smoked a cigarette in the toilets during the tirade which left other passengers ‘shocked’.

Burns, who lives in Hove, pleaded guilty to being drunk on an aircraft and assault by beating at Uxbridge Magistrates’ Court in March. She was sentenced today at Crown court after magistrates said the offence was too serious for them to deal with.

Chairing the bench last month, Robert Della-Sala told Burns: ‘You clearly put the safety of the aircraft in jeopardy by smoking. You were disruptive to other passengers who must have found the whole experience quite shocking.

‘The disruption was clearly over a long period of time, the level of racist abuse was prolonged and unwarranted – there’s no excuse for that.

‘The spitting in the face must have been one of the most awful things that can happen to anybody, given the transmission of diseases.’

Prosecuting last month, Lauren Smith said ‘She got up from her seat and began swearing and shouting. She was shouting that she was a ‘f****** international lawyer’ and telling them to ‘f*** off’.’

Burns then went into the toilet to try to light a cigarette before she was given a verbal warning three hours into the flight, the court heard.

Miss Smith said: ‘Her behaviour continued. She was then given a written warning by the captain. This also made no difference to Miss Burns’ behaviour.’

Flight staff then discovered evidence she had been smoking in the toilet and there was ‘a smell of cigarettes coming from within’.

Caught on camera: Fellow business class passengers also got an earful, with Burns accusing them of not ‘standing up against injustice’

Her tirade continued further into the flight as she got up from her seat and marched to the area where alcohol was being served to again demand more, the court heard.

A cabin supervisor, Dastur Pervin, tried to intervene but she was also told to ‘f*** off’, shown the middle finger and assaulted, Miss Smith said.

Burns also ‘grabbed her by her right upper arm and squeezed it’ before going on to abuse other crew members and passengers.

After touchdown she was arrested in London by officers from the Metropolitan Police.

After landing at Heathrow she was arrested on suspicion of racially aggravated public order, common assault and drunk and disorderly and taken to a west London police station.