Six rescue workers have died in a search and rescue operation by Russian authorities to to save dozens of miners trapped deep underground after a huge explosion at a mine in eastern Russia this morning.

At least 11 miners were ‘wiped off the face of the earth’ in the initial blast, when coal dust ignited in a ventilation shaft 820ft below the surface in the Listvyazhnaya mine in the Kemerovo region around 9am this morning, local emergency services told TASS news agency.

Authorities said that 239 of 285 people working in the mine were evacuated, but the 46 miners remaining in the mine are all thought to have died along with six rescue workers who became trapped underground and ran out of oxygen.

The rescue mission was halted on Thursday afternoon because of fears that high methane gas levels could trigger another explosion.

Regional governor Sergei Tsivilev said: ‘The chance of an explosion is very high. We’ve decided to suspend the search and rescue operation until the concentration of gas reduces.’

There were also local reports of a second explosion at the coal mine this afternoon, around 12 hours after the first.

Deputy Prosecutor General Dmitry Demeshin told reporters that the fire most likely resulted from a methane explosion caused by a spark, and Russia’s Investigative Committee has launched a criminal probe into the fire over violations of safety regulations that led to deaths.

The committee said the mine director and two senior managers were detained as a result of the investigation.

The coal-producing region of Kemerovo, located roughly 2,175 miles east of Moscow, has suffered fatal mining accidents for years, but today’s accident has prompted the region to declare three days of mourning.

An explosion deep underground at a coal mine in Russia’s Siberia region has killed 52 people and injured dozens more. Rescue workers are pictured carrying out the body of one miner. 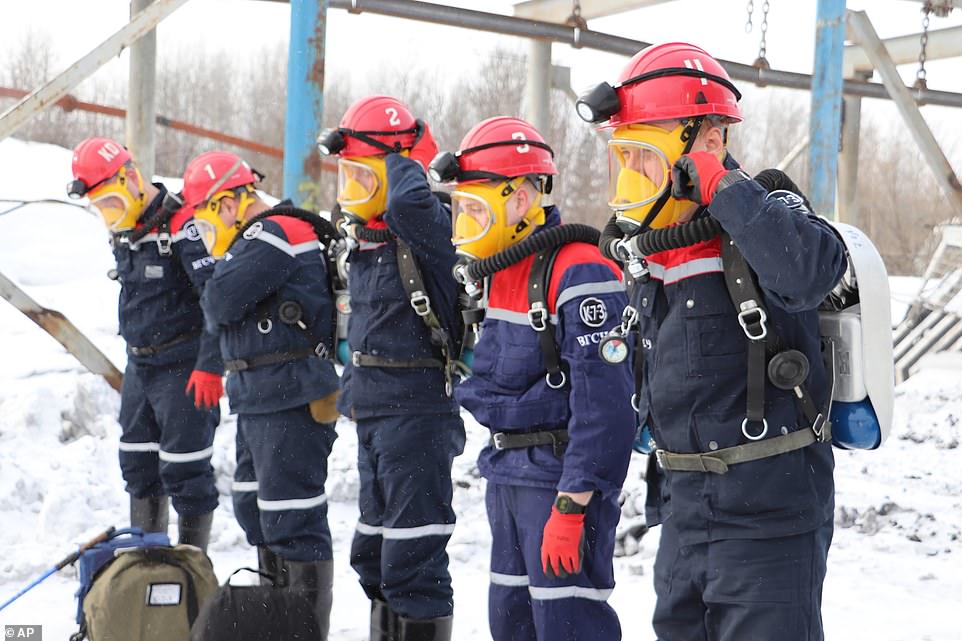 The blast took place 820ft below the surface at Listvyazhnaya coal mine in Siberia shortly after 9am Thursday, when coal dust in the ventilation ducts caught fire. Pictured: Rescuers at the scene 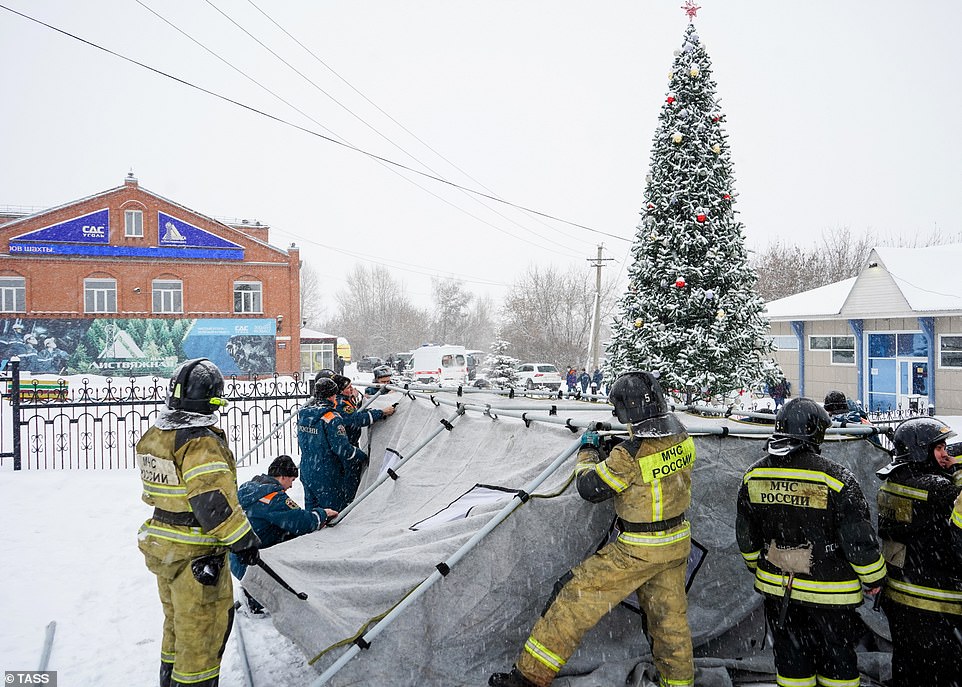 Efforts to rescue those trapped in the mine were halted on Thursday afternoon because of an explosion threat, and rescuers were rushed out of the mine, administrators told the Interfax news agency. Pictured: Emergency services personnel erect a tent during the search mission 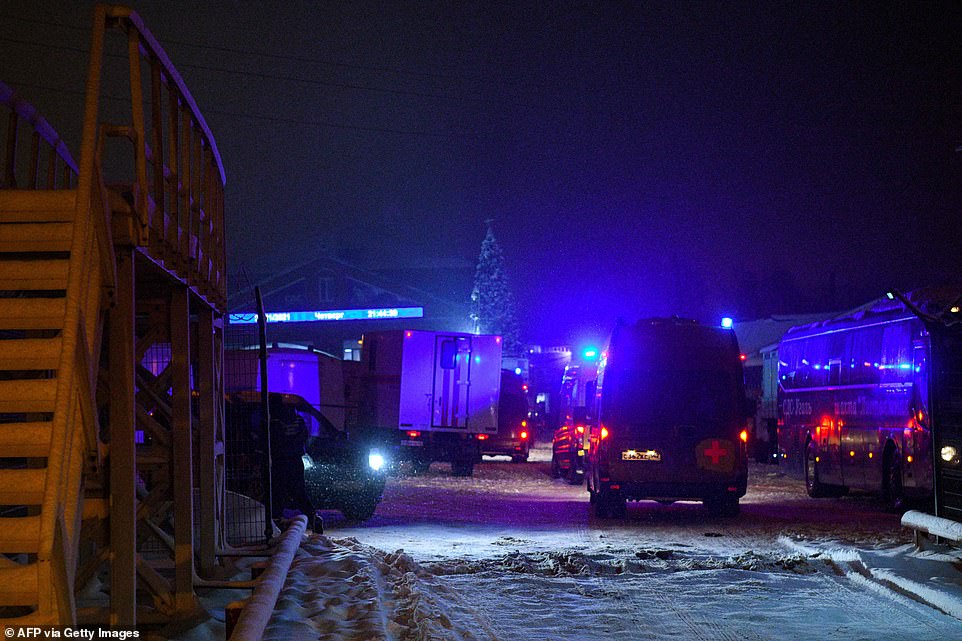 Rescuers began conducting a search operation at the Listvyazhnaya coal mine in the Kemerovo region on Thursday following the explosion, but the rescue operation was halted amid fears of a further explosion 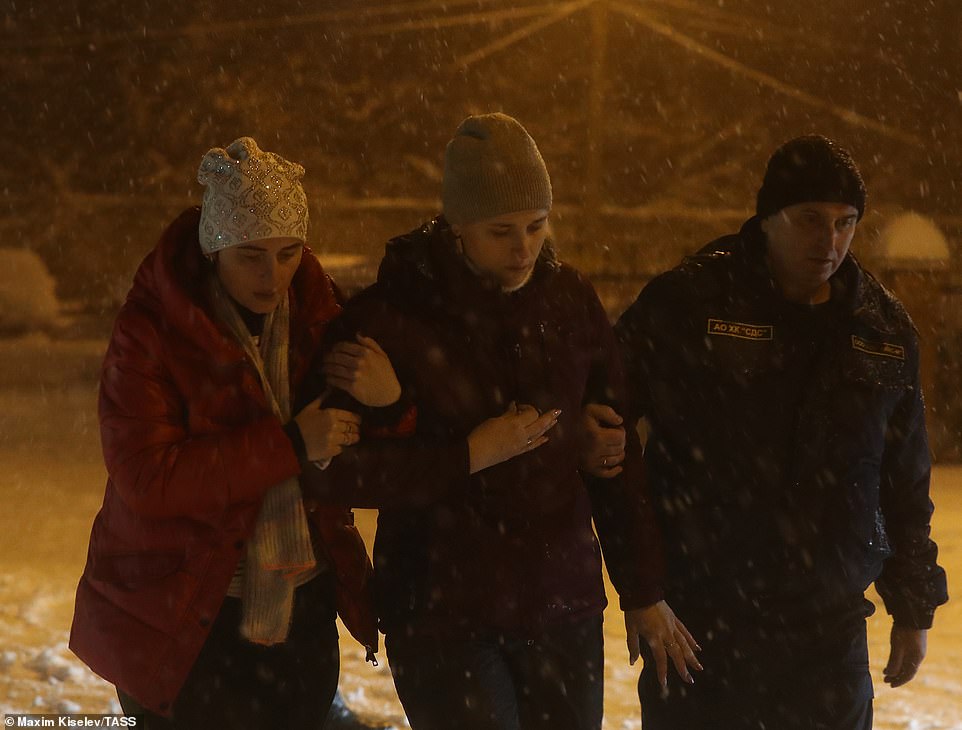 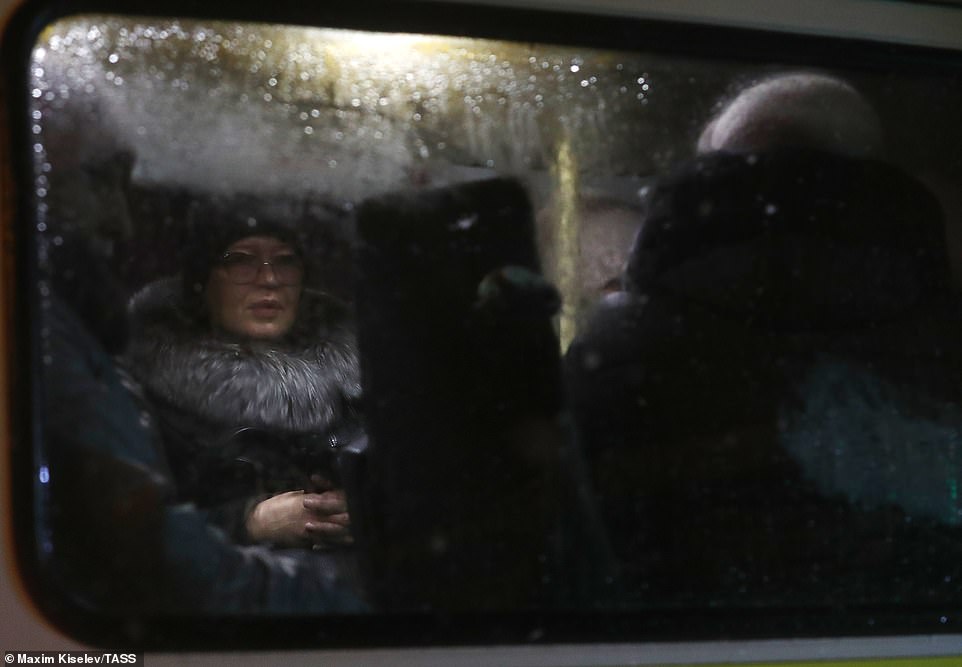 Pictured: The relatives of the victims are seen in a bus at the Listvyazhnaya coal mine on Thursday evening 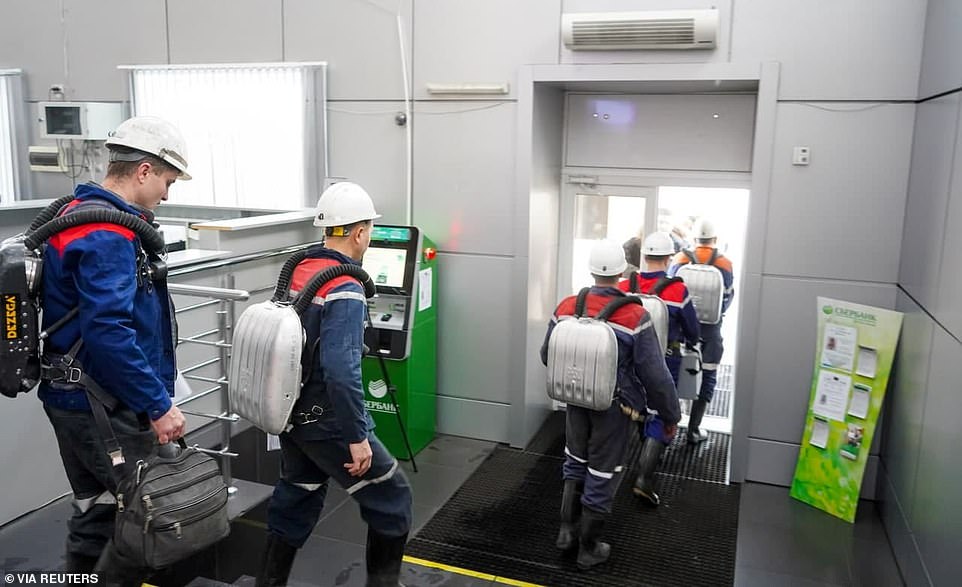 Specialists take part in a rescue operation following a fire in the Listvyazhnaya coal mine in the Kemerovo region. The rescue operation has since been halted due to fears of a further explosion

A total of 154 rescuers had been working at the mine, managed to check 11 miles of tunnels out of a total of 25 miles before the rescue operation was halted, said local sources.

Interfax said an explosion ‘thundered’ in the mine causing the emergency. Fire was said to be raging in a ventilation tunnel.

A report by Russia’s Interfax news agency said an ‘equipment malfunction’ or ‘natural causes’ were seen as the cause of the explosion.

Reports said there were hopes the missing men had found an air pocket beneath the fire and some distance from it. But there was no contact with the men.

An unnamed miner said that those at the epicentre of the ‘huge’ explosion ‘turned into mince meat’, with some having their limbs torn off.

‘They were wiped off the earth,’ he said.

Governor Tsivilev said 11 miners died immediately in the initial explosion, which also left over 40 people in hospital, at least some of them with smoke poisoning. The wounded were ferried by helicopter to hospitals.

‘Forty-three people have been hospitalised with injuries, four of them in a serious condition,’ Tsivilev said.

Rescue teams were halted due to ‘unstable’ gas levels at the mine, some 2,200 miles east of capital Moscow.

‘Unfortunately the situation is not getting easier. And there’s a danger to the lives of the rescuers… We’ll hope they can save as many people as they can,’ he said on TV.

A wife of one of the missing miners said: ‘We are praying for a miracle.’

Minister of Emergency Situations Alexander Chupriyan confirmed before the suspension that the rescuers ‘are already finding bodies’. 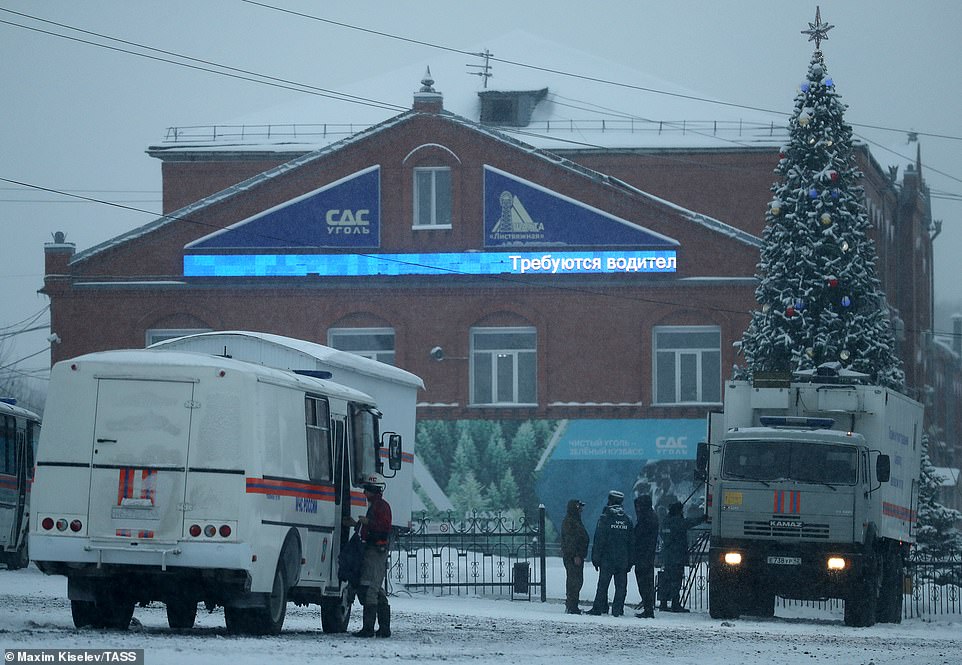 People are seen outside the building of the Listvyazhnaya coal mine in the town of Belovo in the Kuznetsk Coal Basin in Kemerovo Region, southwestern Siberia 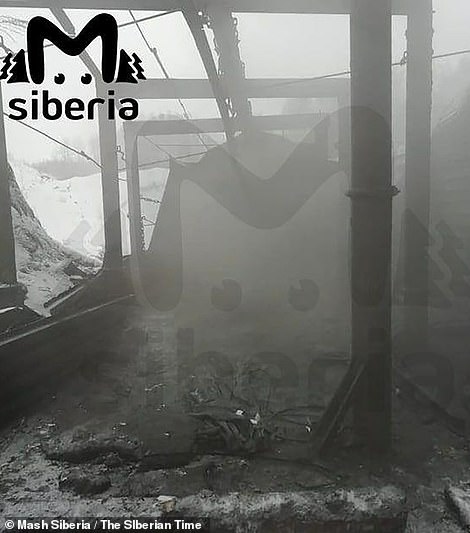 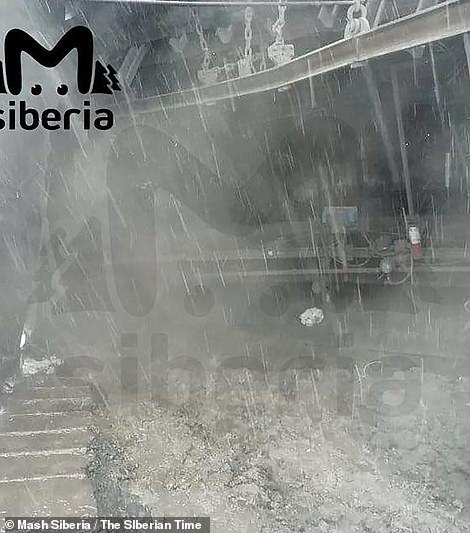 Miner Nikolay Alimov, on leave due to injury, said: ‘There was kind of an explosion. Many people have been poisoned by carbon monoxide, some more seriously, some more mildly.’

Some miners had managed to pull out others ‘before they suffocated’, he said after talking to his brother who escaped from the stricken mine.

One pitman said: ‘I had just started my shift, I went down 600 metres and there was a loud clap.

‘There was dust, nothing to breathe. I started suffocating. If my self-rescue kit hadn’t worked, I would have stayed down there.

‘On the previous shifts, you could smell the gas. Safety regulations do not allow you to work when you smell gas.

‘But the bosses insisted that we should work. If you are not satisfied, go and quit, they said.’

Another miner said: ‘We were the first shift, we started work at 9am. We went down and walked 400 metres down and smelled burning. Suddenly it became impossible to breathe.

‘We switched on our self-rescue kit and came out.’

As the first victims emerged from the mine, a local emergencies source said: ‘According to preliminary data, none have bodily injuries.’

‘They inhaled (smoke) as a result of the explosion.’

According to Russia’s technological watchdog, an explosion occurred in the mine’s airway. A criminal probe into the fire has been launched.

President Vladimir Putin extended his condolences to the families of the killed miners and ordered the government to offer all necessary assistance to those who were injured. 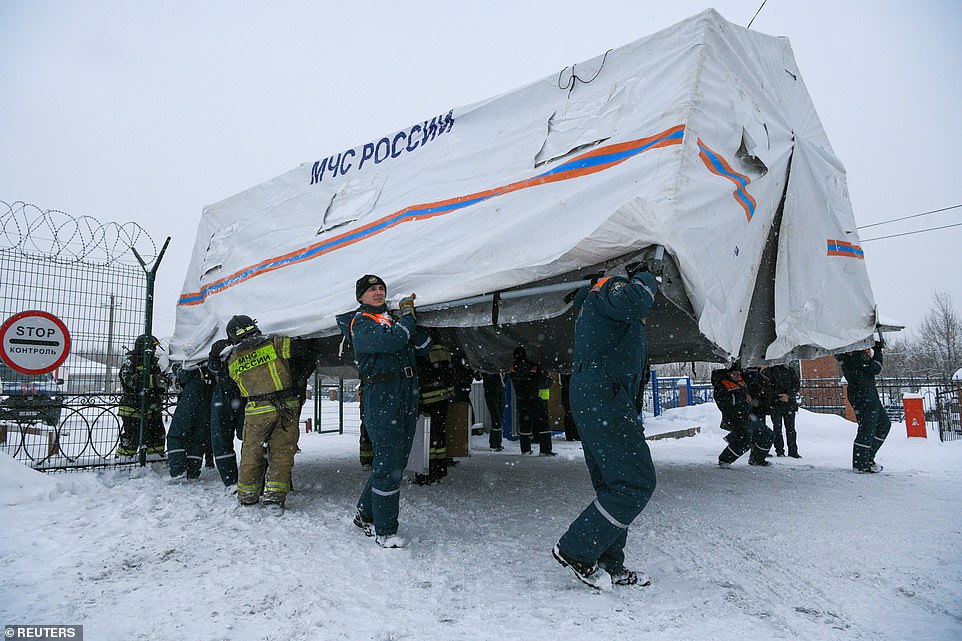 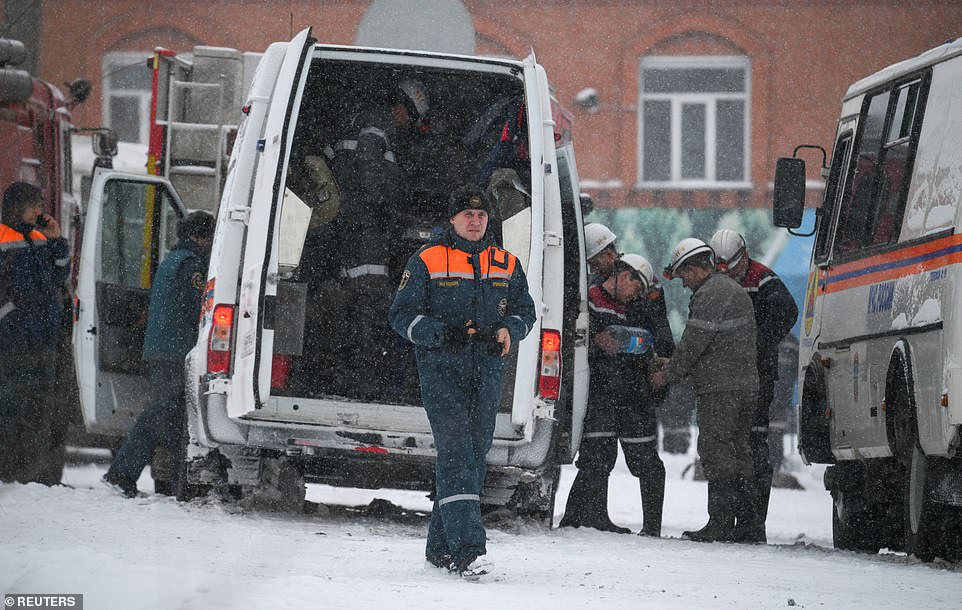 Specialists take part in a rescue operation following a fire in the Listvyazhnaya coal mine in the Kemerovo region, Russia on Thursday

‘An emergency situation has occurred in the Kemerovo region today,’ he said. ‘People have died and been injured in a fire in the Listvyazhnaya mine.

‘I am deeply shocked by what has occurred. It’s a big tragedy for the people, for the region, for all of us.’

Kemerovo has declared a three-day period of mourning following the explosion.

The Listvyazhnaya mine was set up in 1956 and is owned by the SDS-Ugol company, one of Russia’s biggest coal mining companies.

A methane blast in 2004 killed 13 people at the mine and another explosion at the site killed five people in 1981, according to Russian media reports. 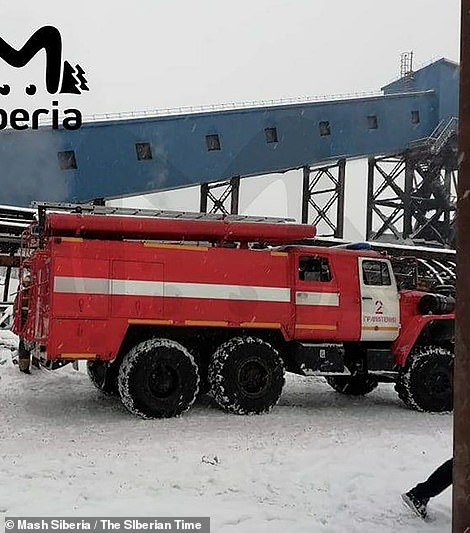 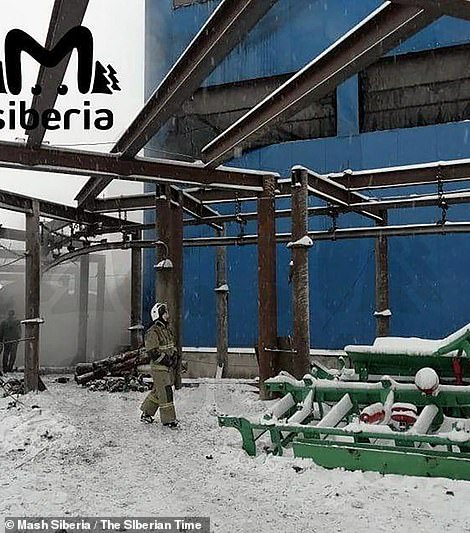 Reports of the missing differed due to confusion over the exact number of miners in the mine when the blast happened, but some reports put the number as high as 75 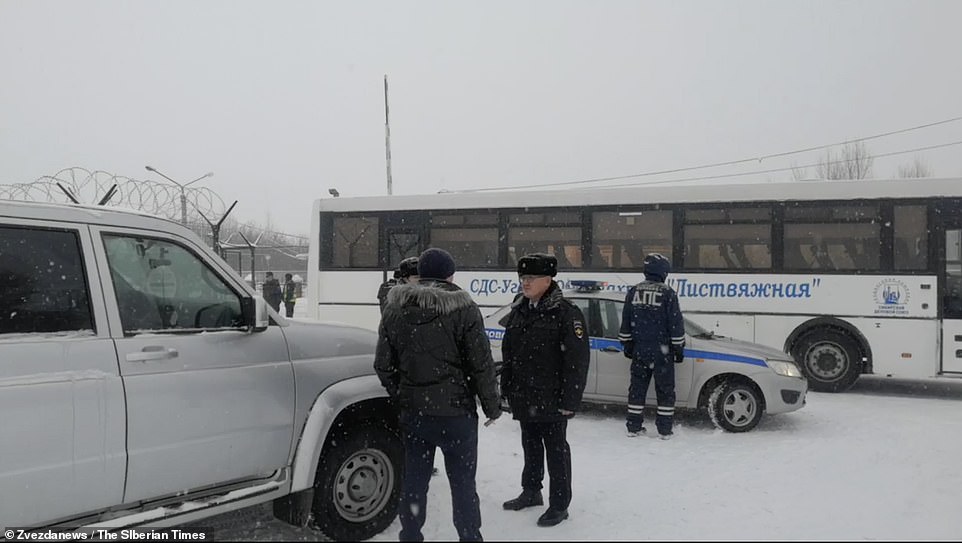 Mining accidents are fairly common in Russia and across the former Soviet Union as a result of poor safety standards, a lack of oversight of working conditions and ageing Soviet-era equipment.

In one of the worst recent examples, the rupture in October 2019 of an illegal dam at a gold mine in Siberia left 17 people dead.

The same month, three people were killed in an accident at a mine in the Arctic belonging to the Norilsk Nickel group, the world’s largest producer of nickel and palladium.

In August 2017, eight people went missing after a flood swept through a Siberian diamond mine operated by Russia’s Alrosa, one of the world’s leading producers of rough diamonds.

After about three weeks, Alrosa announced it was stopping the rescue operation.

In 2007, Kemerovo was the site of the worst mining accident since the 1991 collapse of the Soviet Union when an explosion at the Ulyanovskaya mine claimed the lives of more than 100 people.

One of the deadliest mining accidents in Russia in recent years occurred at the Raspadskaya mine in Siberia – Russia’s largest coal mine – in the summer of 2010, killing 91 people and leaving more than 100 injured.

The incident was the result of a powerful methane explosion when more than 300 miners were inside. A second explosion then trapped a group of rescuers.

On top of the deadly accidents, NGO groups have drawn attention to the environmental practices of mines in Russia, one of the largest gold producers in the world.