A fisherman from South Wales has caught a six-stone shark – the largest of its kind ever hooked in British waters.

Mario Asprou, 31, has fished all around the world but landed the giant fish off Strumble Head, Pembrokeshire in December last year.

Tope, also known as the School Shark, can grow to nearly two metres long and is listed as a critically endangered species.

Mario’s catch, which was swiftly returned to the water after being weighed, has only now been verified as the biggest tope ever caught in the UK.

It beat the previous record of a 77lb 3oz fish caught by Ryan Wingfield in 2018, also at Strumble Head.

Mario Asprou, 31, landed his giant fish (pictured) off Strumble Head, Pembrokeshire in December 2020. The catch, which was swiftly returned to the water after being weighed, has only now been verified as the biggest tope ever caught in the UK 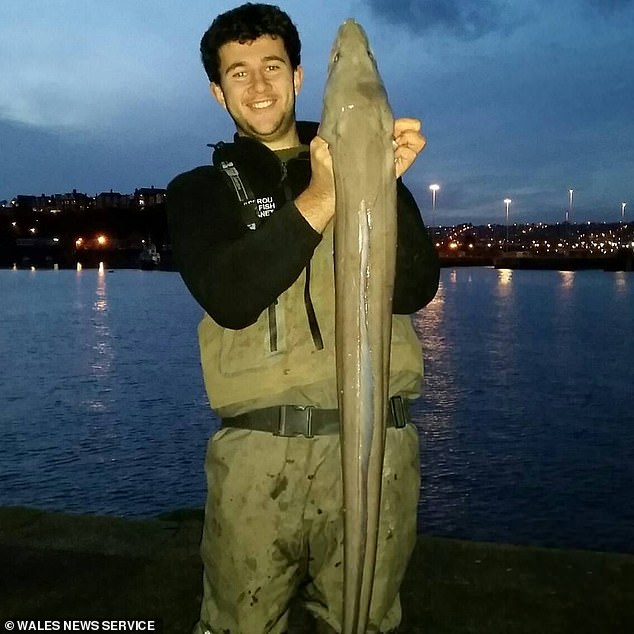 Tope, also known as the School Shark, can grow to nearly two metres long and are listed as critically endangered species. Pictured is Mario with another one of his catches

Feeding behaviour: A variety of fish species, crustaceans or cephalopods

Tope sharks are slim but powerful predators, renowned among fishermen and women for its fighting prowess.

They feed on a variety of fish species, crustaceans or cephalopods, and can travel huge distances of 35 miles each day.

They are often found in the UK and can travel from Britain all the way to the Canary Islands.

Fishing journalist Dave Barnham said: ‘It is by far the best angling achievement of the century to date in my book.

‘The tope was returned alive and swam away strongly.’

British Sea Fishing say catching such a shark from the shore is a ‘very difficult undertaking indeed’.

They say, ‘Due to the protected nature of this species, anyone lucky enough to a tope should unhook their catch as quickly as possible and return it to the water.’

The biggest ever tope caught in a boat in the UK was 82lb 8oz caught in 1991 by R. Chatfield off Bradwell-on-Sea, Essex.

But the largest tope ever recorded globally is a 98.5 pounds (44.7 kg) beast, and the longest is a 6.4 feet (195 cm) female, according to the Florida Museum of Natural History. 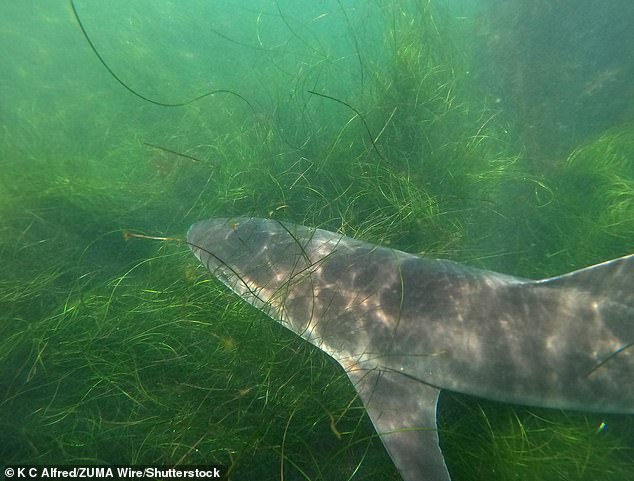 Tope sharks are slim but powerful predators, renowned among anglers for its fighting prowess. They are often found in the UK and can travel 35 miles a day (stock image) 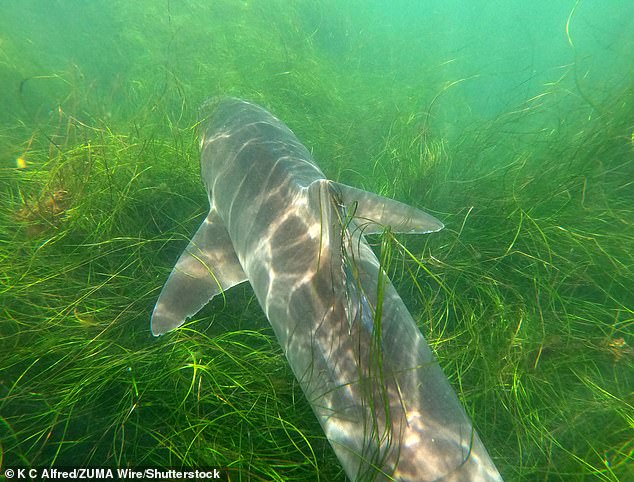 An albino tope was caught near the Isle of Wight in two years ago, and was the first ever all-white shark caught in Britain.

Jason Gillespie, 50, was deep-sea fishing with some friends on September 29 2020 when he caught a 3ft tope shark that was entirely white.

The shark is leucistic, a condition which means it lost all the pigment in its skin.

Jason, from Waterlooville, Hampshire, would usually of immediately released a tope shark – but reeled this one on board so he could take a few snaps, before letting it go.

The shop fitter said: ‘I’ve been fishing for 30 years and I’ve never seen one like that. apparently it’s a condition where the pigment dies out of the skin colour.

‘It’s similar to an albino, but they have red eyes generally.

‘I think generally if they lose their colour they struggle to survive because they don’t have the same camouflage and they can’t hunt as effectively and they get picked up by predators.

‘With tope, they are a protected species, so we unhook them in the water, but the minute we saw this one I shouted to my mate to grab the net and knew I needed to get some photos of it so we pulled her on board and took some pictures.

‘We released her as quick as possible, she was only on the boat for less than a minute.’ 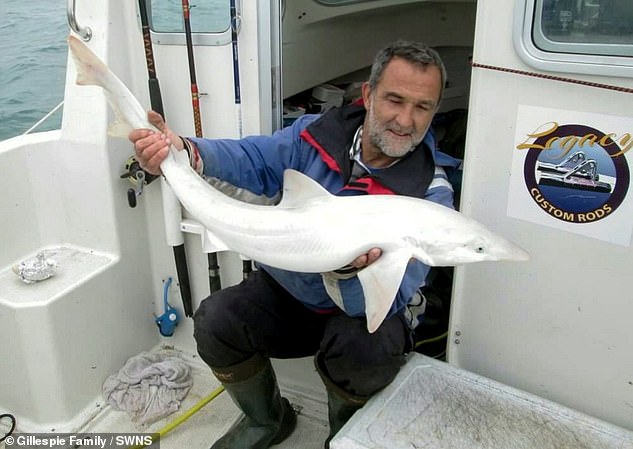 Nearly 40% of all shark and ray species near extinction from overfishing and climate change, study warns

One-third of all shark and ray species are ‘threatened with extinction’ due to overfishing, according to a study published in journal Current Biology.

The findings, which span eight years, show that the number of sharks, rays and chimaera – a group known as chondrichthyan fish – threatened with extinction have doubled to 32.6 percent since 2014.

Eight years ago, 24 percent of species were estimated as threatened.

The researchers note that overfishing is the primary driver of the population loss among the species, but habitat loss, climate change and pollution are also to blame.

Climate change is not only causing ‘the loss and degradation of habitat’ due to coral bleaching, but rising water temperatures as well. 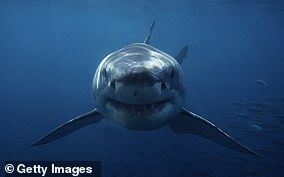 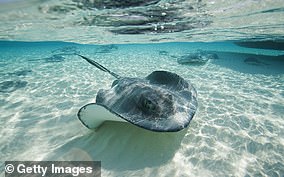