The great escape: City regulators hit by furious backlash after a six-year probe into the near-collapse of HBOS lets bankers off scot-free

By John-paul Ford Rojas For The Daily Mail

It was a catastrophic banking collapse that resulted in a £20billion taxpayer bailout.

Now, 14 years later, there is growing anger that more of those responsible are not being punished.

When the City’s watchdogs finally decided to get the bottom of who was responsible for the demise of HBOS it took them six years, sifting 2m documents. It all ended last Friday with a three-page press release announcing that no further action was needed.

The Financial Conduct Authority’s decision not to investigate ten senior managers, including chief exec Andy Hornby (pictured), was found to be ‘materially flawed’

The Mail has learned that the Financial Conduct Authority (FCA) and the Prudential Regulation Authority (PRA) have no plans to publish more detailed findings.

That leaves questions unanswered about the rationale for the decision – and does nothing to assuage the anger of those outraged by it.

‘I can see why it was a good opportunity to draw a line,’ said Philip Hammond, one of six chancellors who have inhabited 11 Downing Street since the failure of HBOS in 2008.

Yet the announcement has done anything but that, and politicians and City figures have lined up to criticise the move.

The FCA and PRA say their investigations were ‘rigorous and forensic’.

But Prem Sikka, the Labour peer and accounting professor, said: ‘They have basically said to bankers: “You carry on with whatever you were doing before”, because there are no personal consequences. That is no way to respond.

‘These people collect all kinds of performance-related bonuses, but many are the result of malpractice and reckless practices but there are no personal penalties.

These people must have had an idea what was going on, or they would not be fit to be directors. And they are not even being charged with that. I think they need to be liable for criminal prosecutions.’

Halifax Bank of Scotland collapsed in 2008 after racking up £45billion in bad debts.

That resulted in a Government-engineered takeover by rival Lloyds, which in turn then needed to be bailed out by the Treasury to the tune of £20billion, swelling the Government’s debt pile.

At the heart of the latest probe was the question of whether former senior managers should be banned from the financial sector.

It was prompted by a report by Andrew Green QC in 2015 into the handling of the case by the Financial Services Authority, the previous City watchdog, which was superseded by the FCA. 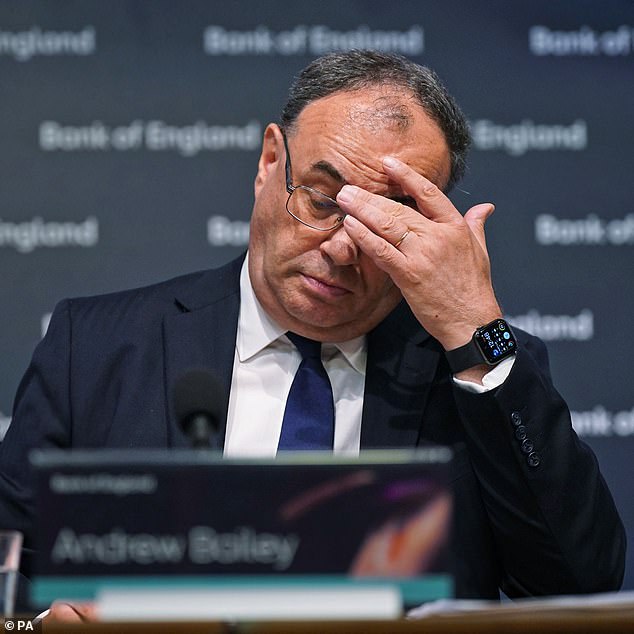 Also in 2015 a preliminary report from the FCA and PRA found HBOS’s board pursued a ‘flawed and unbalanced strategy’ focus on lending more money in pursuit of short-term profitability.

It was Andrew Bailey, as deputy governor of the Bank of England, who announced the investigation – and said it would be carried out ‘as soon as possible’. Bailey, now the Bank Governor, was later in charge at the FCA for much of the period during which the probe dragged on.

Only one former executive, Peter Cummings – then head of Bank of Scotland’s corporate lending – has been punished.

He was fined £500,000 and banned from the City in 2012. Hornby runs the Restaurant Group, owner of Wagamama and Frankie & Benny’s.

Gina Miller, the businesswoman and campaigner, said: ‘Those responsible should have been reprimanded.

Nobody was found guilty, there was no new regulation. And the regulators had so much information. Hornby etc have been rewarded for failure.’

Kevin Hollinrake, the Conservative MP and member of the Treasury select committee, said: ‘They were running what is a systemically important financial organisation, which crashed the economy. This will keep happening time and again if the FCA don’t hold people to account.

‘HBOS was borrowing short and lending long because it thought good times would last forever, but they were absolutely caught out because Hornby was not qualified to run a bank.’