Tess Holliday insists that dropping out of high school her junior year to escape her bullies saved her life, and she wants other kids struggling with similar issues to know that they matter.

The 32-year-old model took to Instagram on Thursday to share an old photo of herself as a teen, explaining that her mom’s somewhat controversial decision to pull her out of school helped shape the woman she is today.

‘I dropped out of school when I was in 11th grade from bullying,’ she wrote. ‘That decision saved my life and allowed me to become who I am today, even if at the time my family wasn’t the kindest to my mom for pulling me out of school. I went on to get my high school diploma and never looked back.’

Throwback: Tess Holliday took to Instagram on Thursday to post a photo of herself as a teen while sharing a powerful message for those who are suffering from bullying 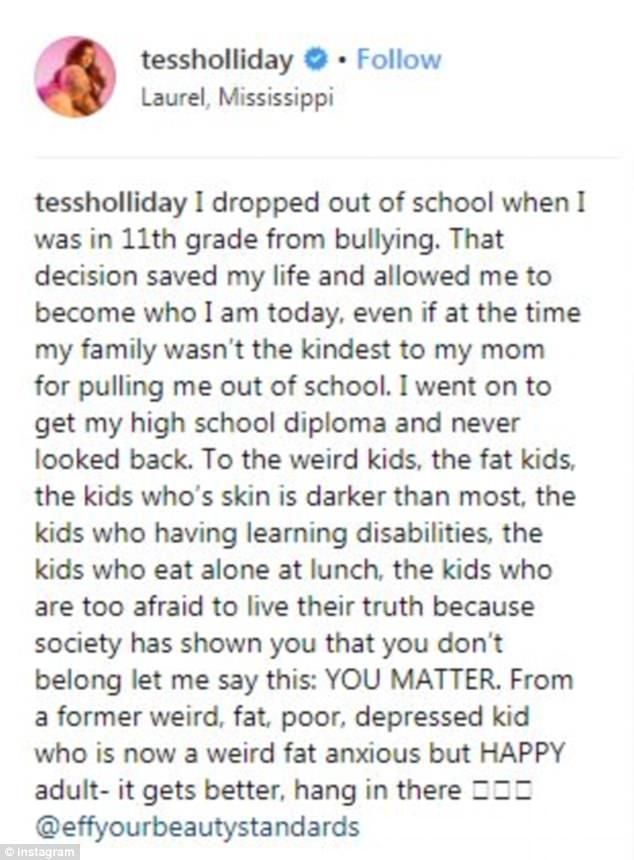 Looking back: The size 22 model explained that her mom pulled her out of school when she in the 11th grade because she was bullied and it saved her life

Tess went on to share a powerful message with her young fans, explaining that things will get better for them.

‘From a former weird, fat, poor, depressed kid who is now a weird fat anxious but HAPPY adult- it gets better, hang in there.’

In the photo she posted, she is fresh-faced and smiling from ear to ear. Tess’ now auburn hair was dark brown and cut into a shoulder-length bob. 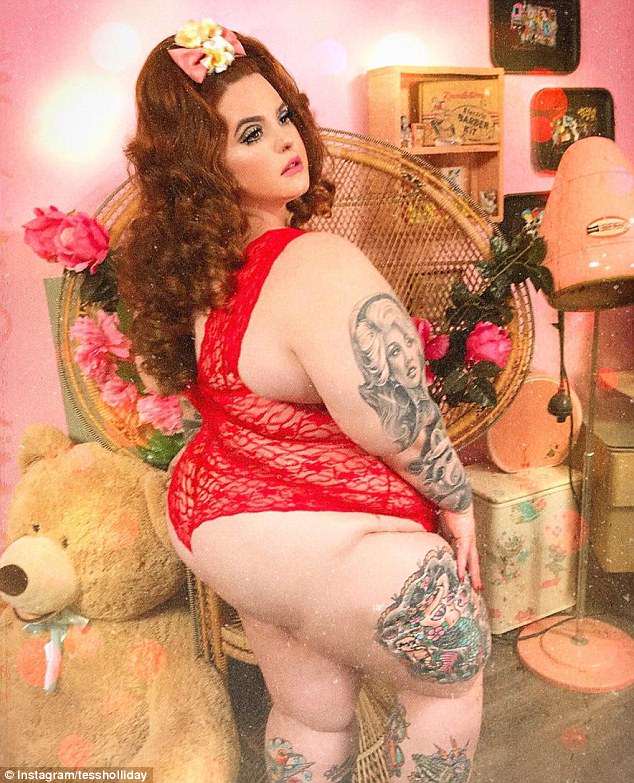 It gets better: Tess (pictured at a shoot in Los Angeles last week) stressed that she is now a happy adult 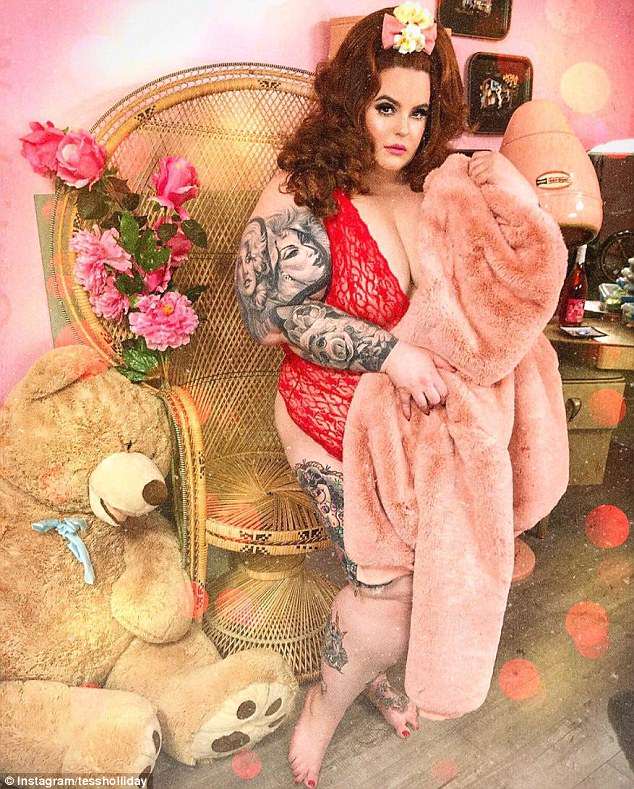 Keeping with the style of the times, she had on a smiley face T-shirt, hoop earrings, and a necklace with block letters on it.

The post received more than 75,000 ‘likes’ in just one day, and many commenters were inspired to share their own personal stories about being homeschooled because of bullying.

One mom named Lori revealed that she took her daughter out of school because of bullying, noting that they are homeschooling her now and she is ‘much happier.’

‘I loathed school because I was bullied and also have ADHD and that made me learn differently, which is not something a teacher can help you with when he/she have so many other students to teach,’ another person wrote. ‘So when I had my kids I vowed to homeschool.’ 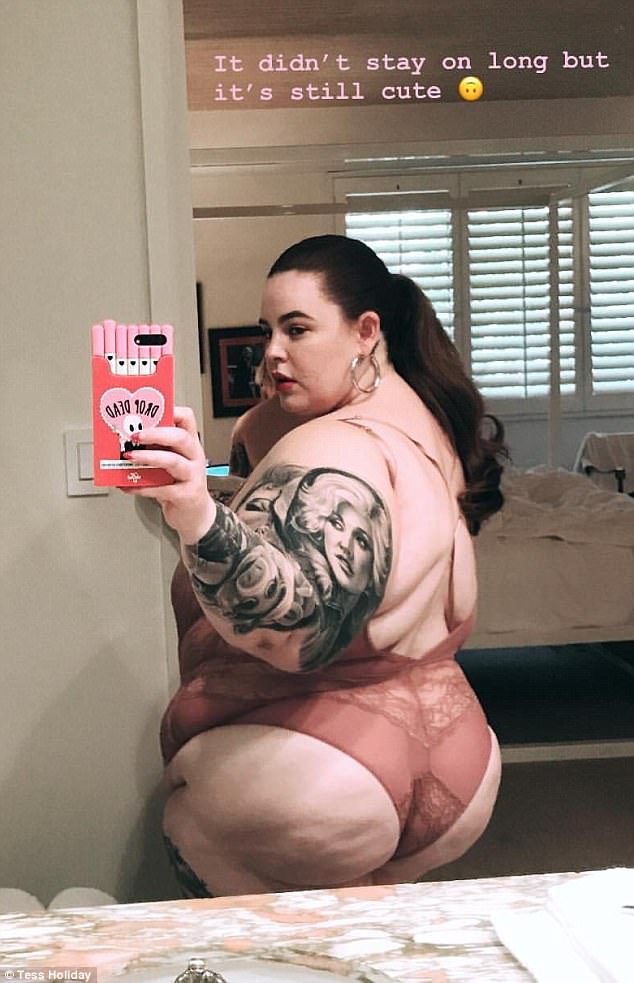 Belfie: Tess shared this sultry selfie with her 1.5 million Instagram followers while on holiday in Palm Springs 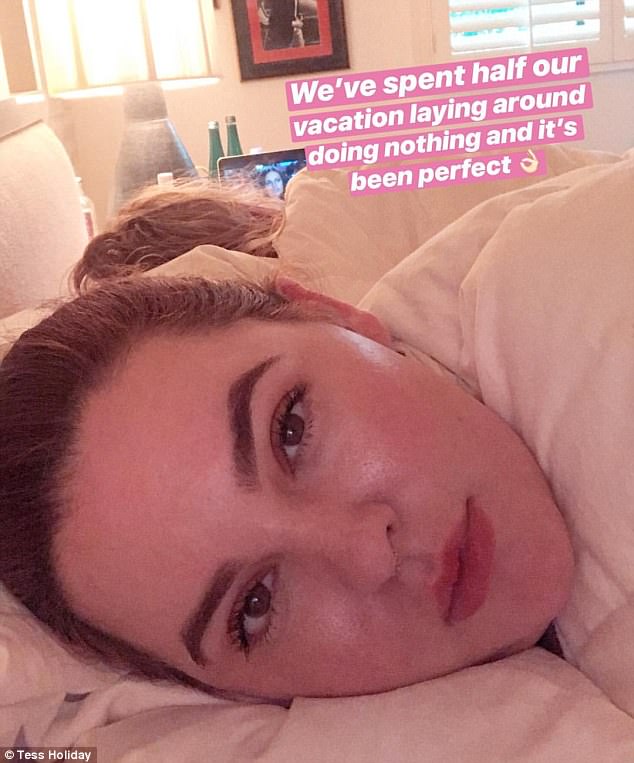 Pillow talk: While on vacation with Nick, the mom-of-two gave her followers an intimate glimpse into her life by revealing that they had spent most of their time ‘laying around’

Tess uses her social media platform to promote self-love and body positivity, and she is never one to shy away from posting a sultry lingerie photo.

Earlier this week, she took to Instagram Stories while in Palm Springs to share a sexy snapshot with her 1.5 million followers while enjoying a vacation with her husband Nick Holliday in Palm Springs, California.

Tess uploaded a picture of herself posing in front of her hotel bathroom mirror in a sheer, nude bodysuit, hinting that her husband liked her revealing ensemble so much that it didn’t ‘stay on long.’

However, her bedroom antics aren’t for her husband’s eyes only, as the Mississippi native also shared with her fans that they had spent most of the trip ‘laying around.’ 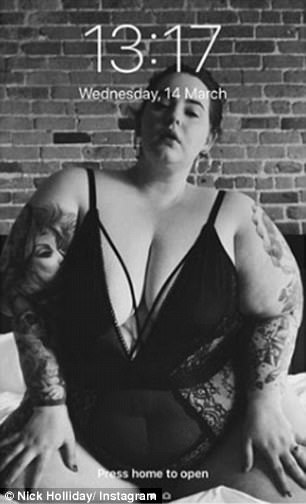 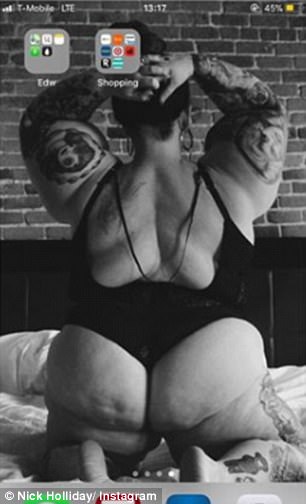 Proud hubby: The posts come just days after Nick shared these screenshots of his phone screensaver depicting racy photos of his wife in the background 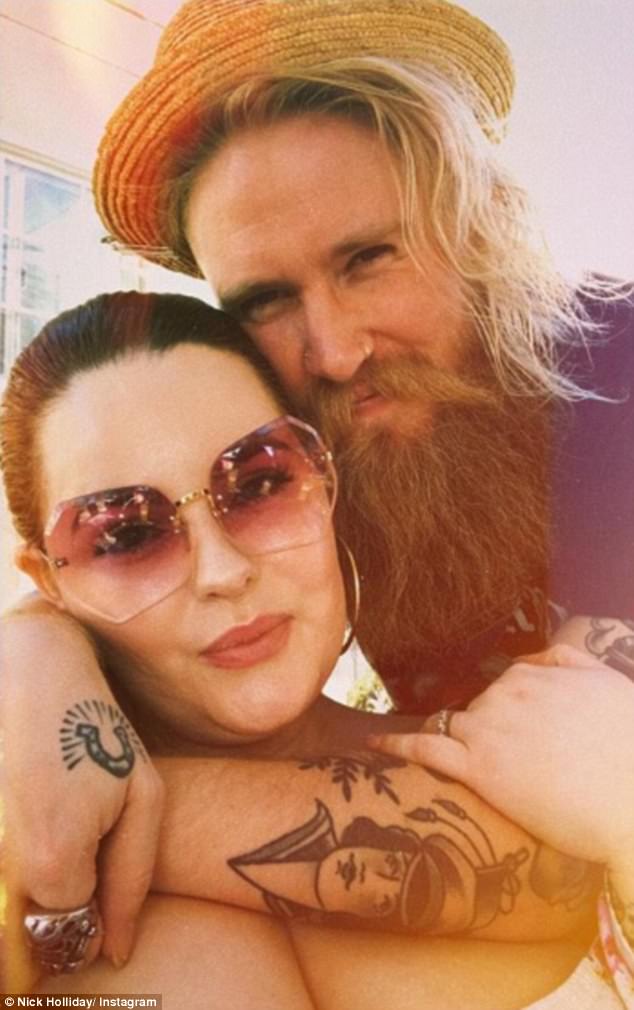 Loved up: Tess and Nick married in a private ceremony three years ago 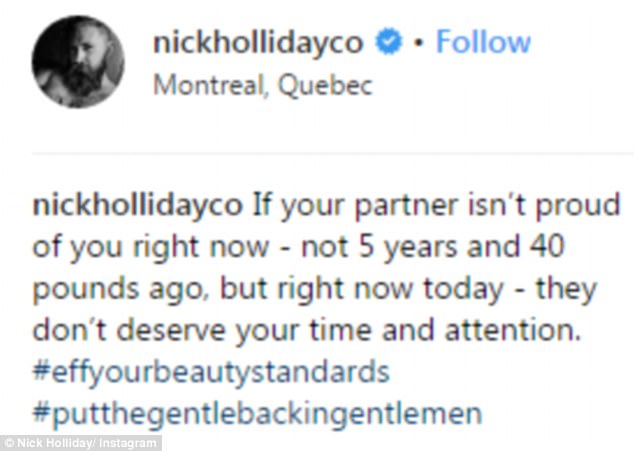 Sending a message: In the caption for the post, he encouraged others to make sure they are valued by their partners

Tucked up under the sheets, Tess captioned a shot of herself from bed with the words: ‘We’ve spent half our vacation laying around doing nothing and it’s been perfect’.

The intimate glimpse into the couple’s private life comes just days after Tess posted photos of herself modeling a red lace teddy at a shoot in Los Angeles.

The size 22 model used the captions ‘Daydreaming about cake’ and ‘Babydoll moments’ while sharing two photos of herself wearing the racy see-through onesie.

In the ’60s-inspired images, Tess’s auburn hair is curled and pulled half up with a floral bow on top. She is posed in front of a wicker chair and an oversize teddy bear, and in one shot she turned to show off her backside. 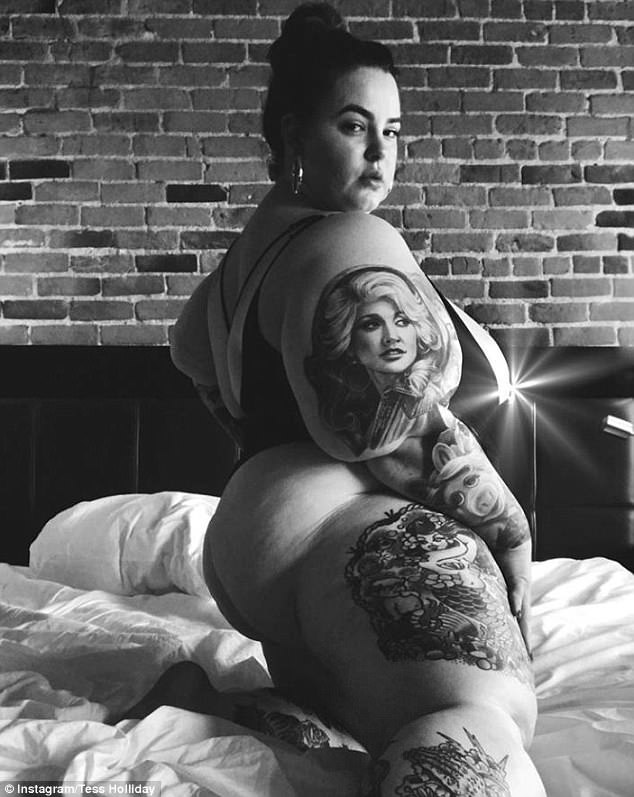 A little help: Tess shared her own post thanking the self-timing feature on her phone for allowing her to take ‘hot’ pictures for her husband 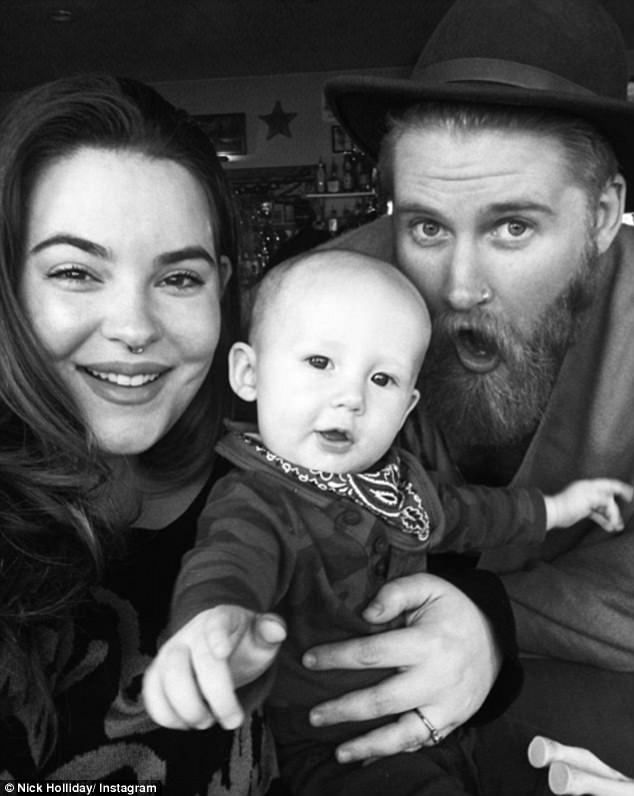 Happy family: The couple are parents to their Bowie Juniper, who born in June 2016 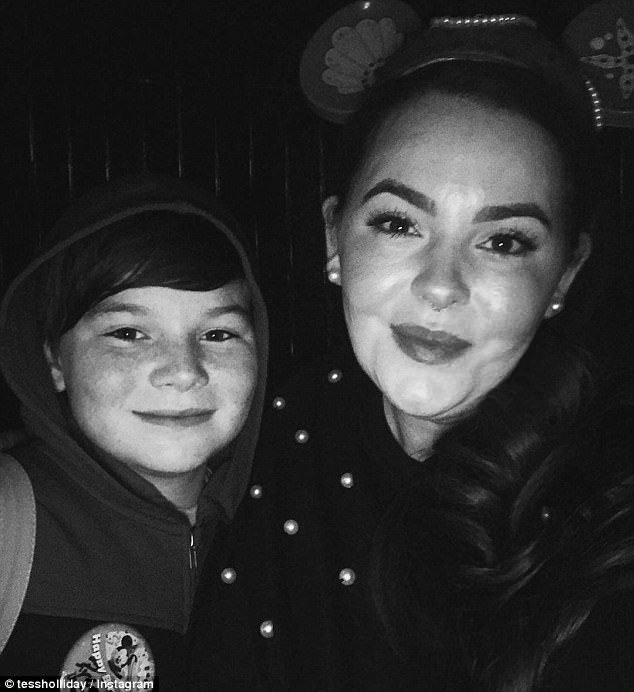 Motherhood: Tess also has an 11-year-old son named Rylee from a previous relationship

The sultry images came just a week after she posted a risqué snapshot of herself wearing a black body suit, along with a thank-you to the self-timing feature on iPhones ‘for giving me the power to take hot photos like this for my husband.’

She added: ‘He got the unedited ones, [sorry].’

Nick  also shared his own post, including screenshots of his iPhone lock screen and background bearing images looking to be from Tess’ same selfie session.

Tess’ husband used the opportunity to send a body-positive message, writing in the caption: ‘If your partner isn’t proud of you right now – not 5 years and 40 pounds ago, but right now today – they don’t deserve your time and attention.’

He finished the post with hashtags such as Tess’ tagline #effyourbeautystandards and #putthegentlebackingentlemen.