A delicate wall carving of a curly-haired man on Florence’s town hall could be the work of Michelangelo, a historian has claimed.

For years, tour guides in the Italian city have said the small outline of the man chiseled into the stone wall of the Palazzo Vecchio is by the famous artist and sculptor.

Academics have dismissed the claims surrounding the graffiti, which is nicknamed L’Importuno di Michelango.

But now, Andriano Marinazzo, a curator and historian at Virginia’s Muscarelle Museum of Art at the College of William & Mary, has brought new evidence to the fore.

The delicate wall carving (pictured) of a curly-haired man on Florence’s town hall, known as Palazzo Vecchio, could be the work of Michelangelo, a historian has claimed 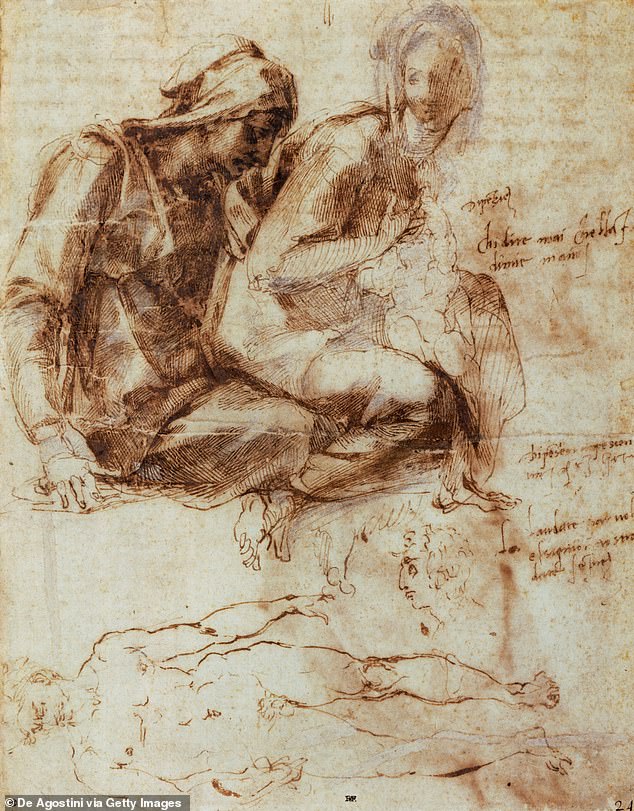 A drawing of a curly haired man by Michelangelo can be spotted in the picture above if you look carefully. The small is just above the drawing which is similar to the ‘David’ sculpture 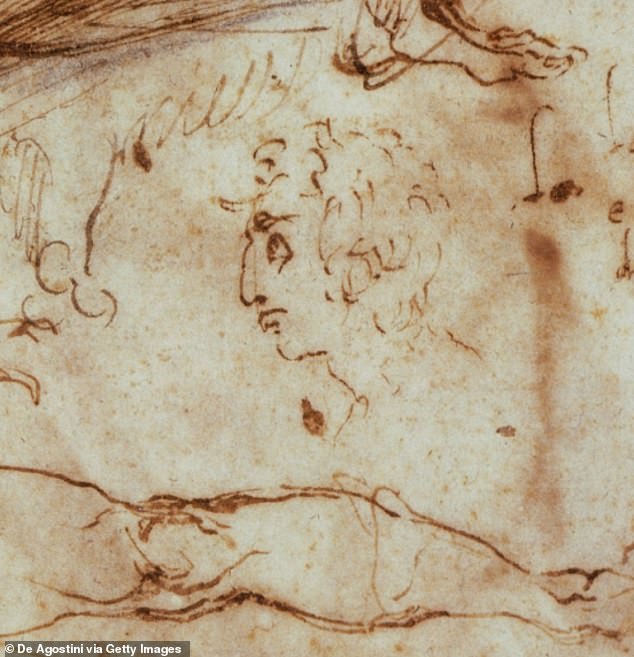 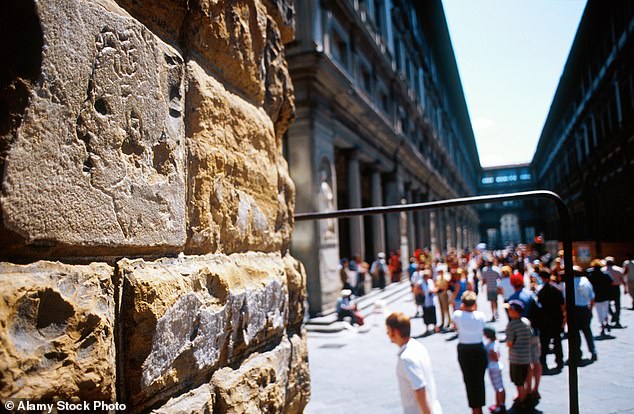 For years, tour guides in the Italian city have said the small outline of the man chiseled into the stone wall of the Palazzo Vecchio is by the famous artist and sculptor

Andriano argued in a scholarly paper that an overlooked drawing in Michelangelo’s Louvre archive could be proof that the artist may have carved the work on the wall.

Whilst researching the artist’s drawings, Andriano found a delicate outline of a man with a prominent Adam’s apple, Roman nose, weak chin and a head of curly hair, he told the Wall Street Journal.

‘The man in this sketch looks like the mysterious man on the Palazzo Vecchio,’ he said.

Next to the drawing, which was on a sheet with early versions of better-known works such as a figure linked to his famous ‘David’ sculpture, was a written message from Michelangelo which read: ‘Who would ever say it is by my hand?’

Andriano, who discovered an early Michelangelo sketch of the Sistine Chapel, said he is convinced the artist was hinting to the drawing’s counterpart chiselled into the wall of Florence’s town hall.

He believes the Italian artist would have carved it when he was in Florence in 1504 to sketch ideas and to oversee the installation of his sculpture of ‘David’ beside the front door of the building.

The identity of the man carved into the wall remains a mystery. But Andriano says the carving could have been of Francesco Granacci, a friend of Michelangelo who approved the placement of his ‘David’ sculpture.

William Wallace, an art historian at Washington University in St. Louis, is excited by the prospect of a new Michelangelo piece of work being found.

‘We like discoveries because they remind us that history isn’t a closed book,’ he told the Wall Street Journal. ‘There’s more to learn.’ 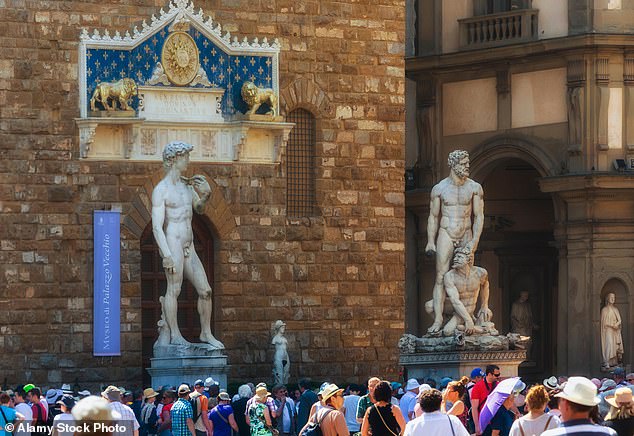 He said: ‘I don’t know how we missed it before. I can’t wait to get back to Florence to see it.’

Michelangelo has a history of using any canvas or materials he could find to sketch ideas – often with a graffiti style, according to Urlich Pfisterer, an art historian at the University of Munich.

He said: ‘Michelangelo, if he had the chance to do it and thought it would be witty, wouldn’t hesitate. We have to dare sometimes to believe new things.’

But not all art historians and academics are convinced by the possible connection. John Cunnally, art historian at Iowa State University, described the drawing as ‘crude and amateurish’, which wasn’t in the style of Michelangelo.

Dario  Nardella, Florence’s mayor, said the drawing has long been an ‘intriguing curiosity’. But he told the WSJ the city was unlikely to take extra measures to protect it, even if Michelangelo made it.

A number of famous works in the same square are already protected by surveillance cameras, the mayor said. He added: ‘The portrait on Palazzo Vecchio’s wall, allegedly by Michelangelo, is already in good company.’