Fascinating sketches of outfits for Princess Diana’s Gulf tour are set to fetch thousands at auction – and they include a drawing of a burka.

Diana, who was 25 at the time, enlisted designers David and Elizabeth Emanuel to make dresses that ‘conformed to local customs’, ahead of her 1986 tour of the Gulf sates in 1986.

Fascinating sketches of outfits for Princess Diana’s Gulf tour, by designers David and Elizabeth Emanuel (pictured with Diana in 1986), are set to fetch thousands at auction 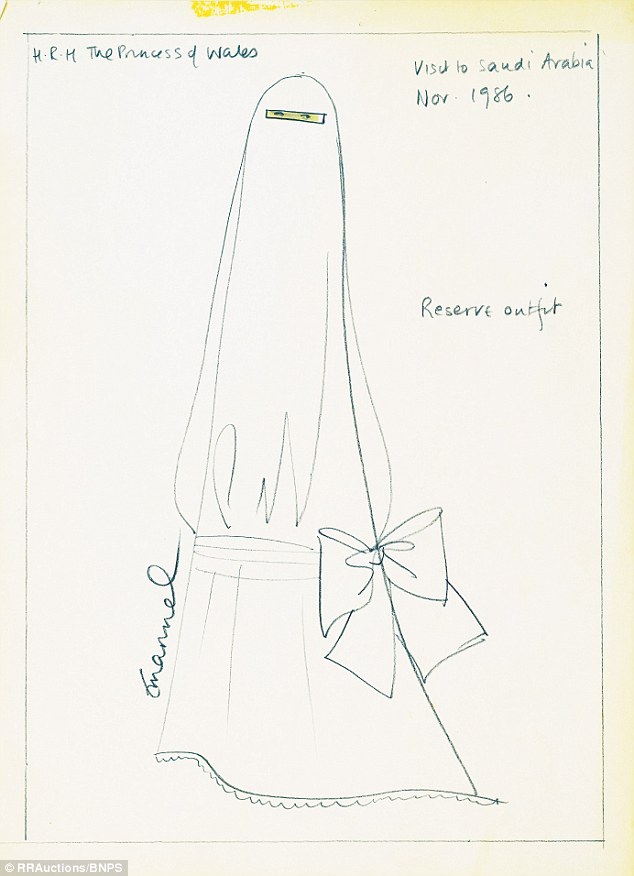 The sketches include a drawing of a burka, which is described as a ‘reserve outfit’ for Saudi Arabia. Diana never wore the burka during her 1986 tour of the Gulf states

They designers also sketched a ‘reserve outfit’, which was a burka that would have covered Diana from head to toe with only a gap for her eyes.

The Princess of Wales did not wear a burka during the trip, but the fact she was willing to consider it shows her sensitivity to other cultures.

The sketches, along with fabric samples for the outfits, are being sold by US-based auction house RR Auctions and are tipped to sell for $30,000 (£24,000).

The drawings include a navy and white stripe coat over a white dress, a purple evening dress and a white silk evening dress. 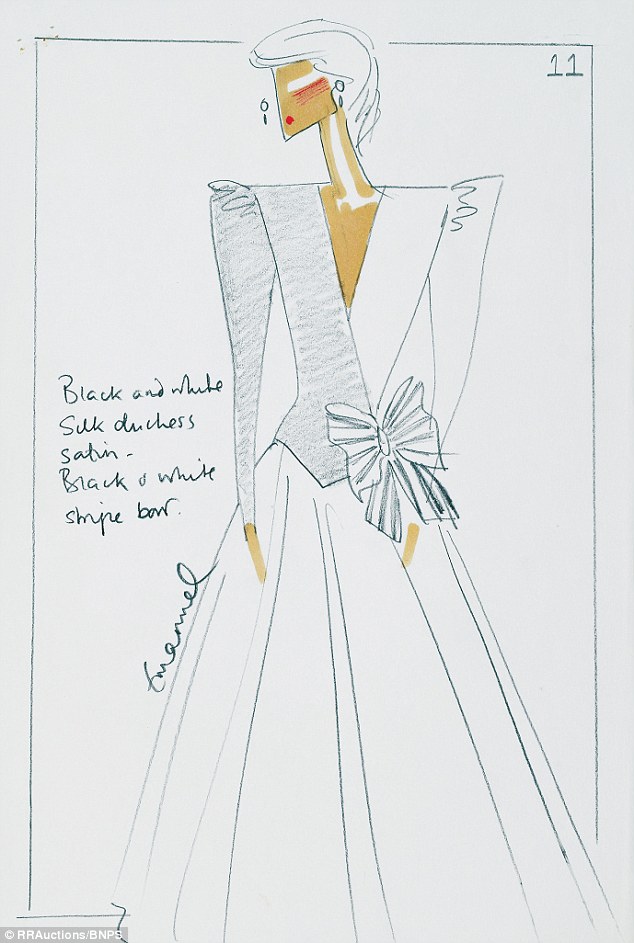 The drawings by David and Elizabeth Emanuel include and black and white evening gown made out of silk duchess satin, decorated with a striped bow 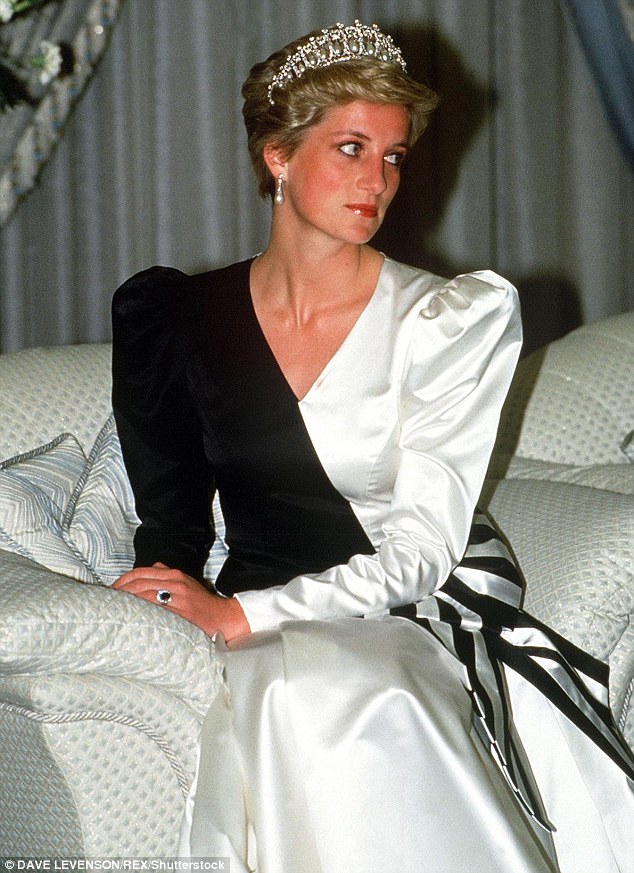 Diana wore the evening gown in Saudi Arabia in November 1986 (above), when she attended a lavish banquet hosted by King Fahd

The collection also includes a letter, dated June 2, 1986, sent to the Emanuels by Diana’s lady-in-waiting, Anne Beckwith-Smith, outlining the strict requirements for her garments during the tour.

She wrote: ‘Certain special requirements concerning dress need to be observed and I am writing to ask if it would be possible to submit to The Princess of Wales a few sketches for day and evening wear from which Her Royal Highness could select items for this tour.

‘Their Royal highnesses will be visiting Oman, Qatar, Bahrain and Saudi Arabia. In all cases modesty is the order of the day.’

Invoices for the dresses also features in the sale revealing they cost between £275 and £450 each. The sketches by the Emanuels, which are going up for auction, include a navy and white striped coat with a demure white dress underneath 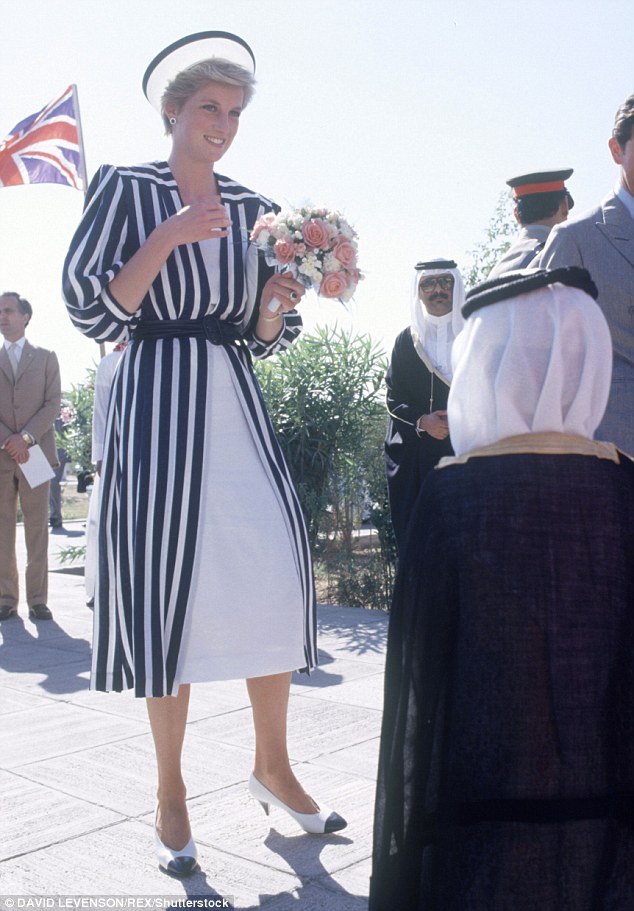 Diana wore the striped belted coat and white dress, along with a matching hat, in Bahrain in November 1986 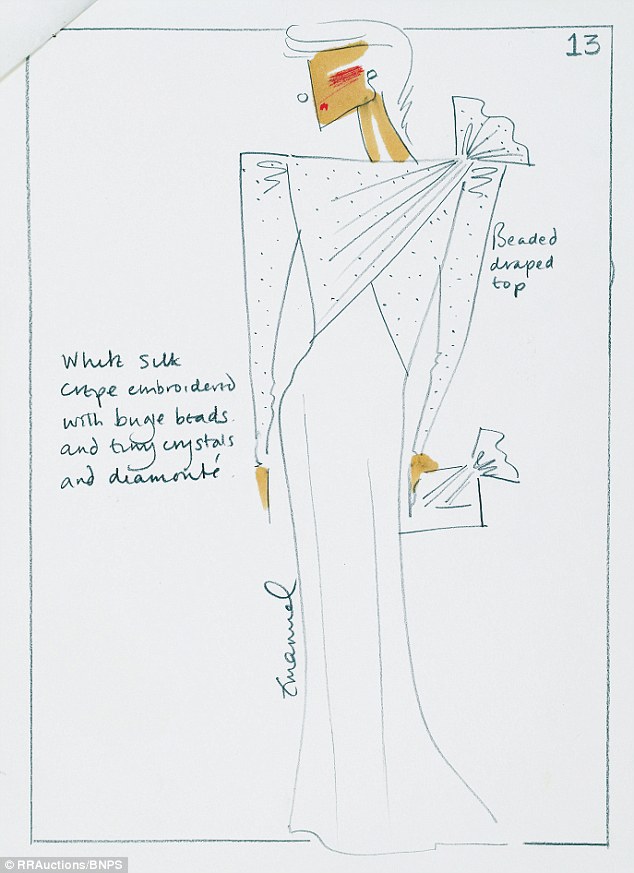 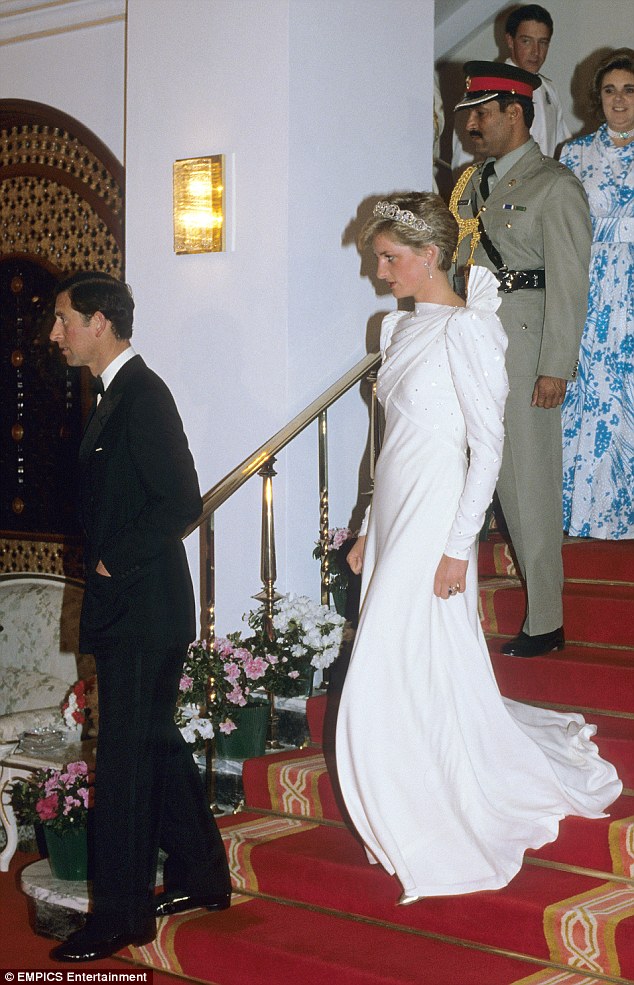 Diana wore the elegant white evening gown for a banquet in Bahrain in November 1986, which she attended with Prince Charles (left)

The collection has been put up for sale by a private collector and it is believed that this is the first time it has emerged on the market.

‘At evening banquets, she appeared in the long sleeved demure dresses made especially for the tour. She did not have to wear the “reserve outfit” burka depicted in this archive.

‘It’s a remarkable, comprehensive archive from the famously stylish royal.’ 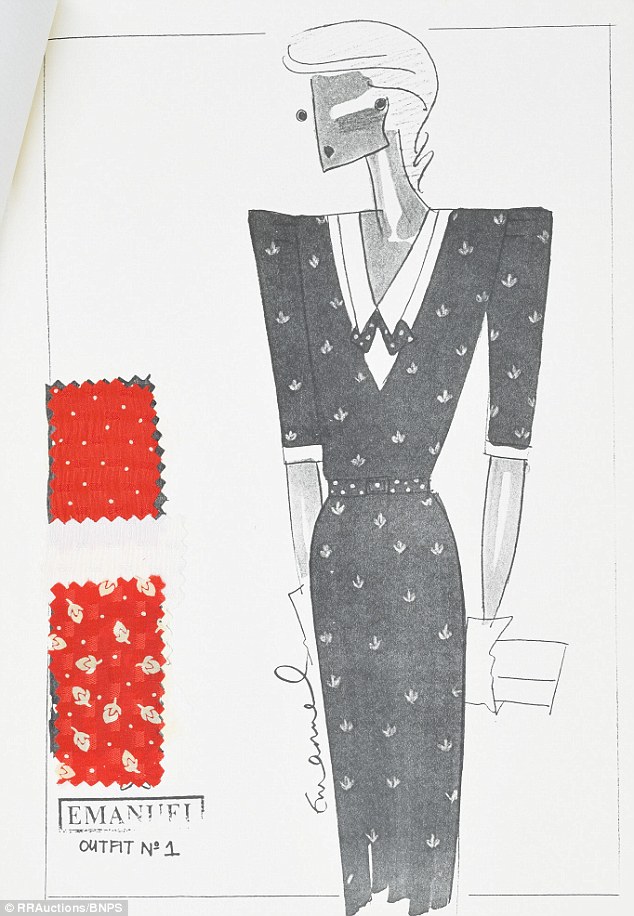 The drawings also come with fabric swatches. Pictured is a printed red and white day dress designed by the Emanuels 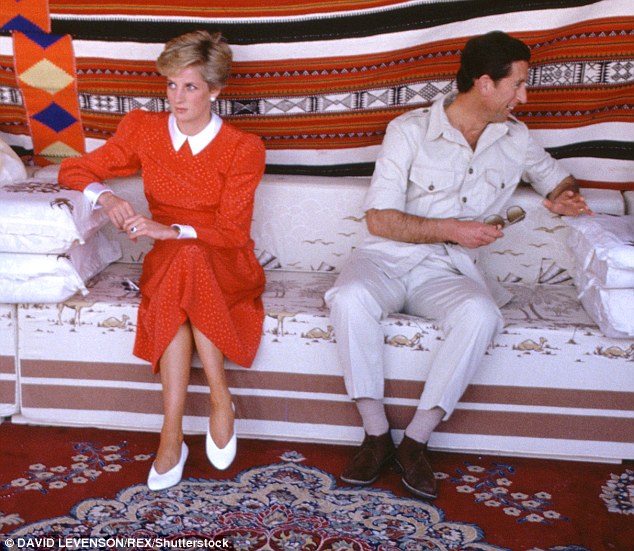 The Princess of Wales wore the dress, featuring longer sleeves and a higher neckline than in the sketch, as she joined Prince Charles in Qatar in November 1986 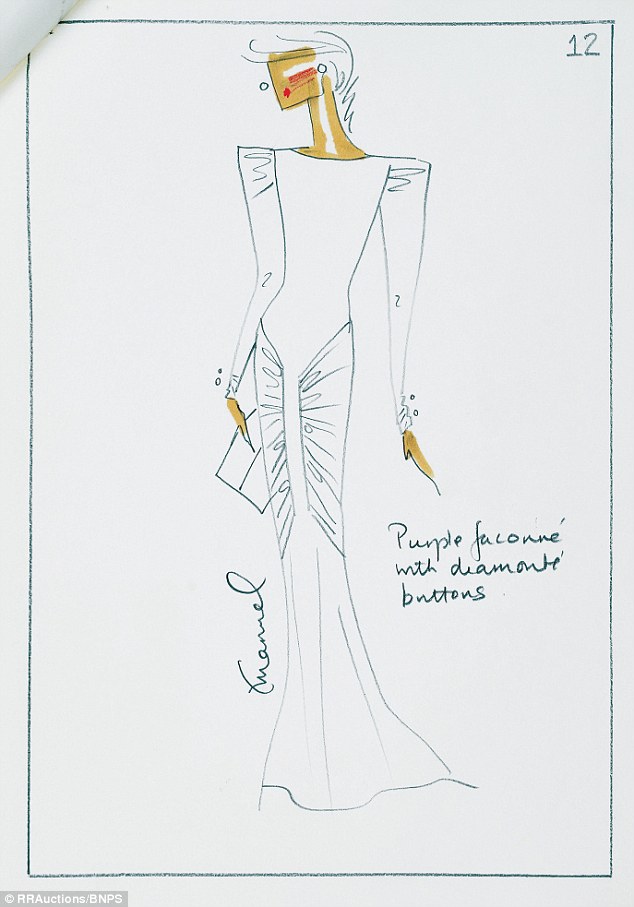 The sketches, which are set to fetch thousands at auction, also include a drawing of a purple evening gown, featuring diamante buttons. Diana did not appear to wear this particular dress during her Gulf tour

Diana and Charles made a whistle stop six day tour of Oman, Qatar, Bahrain and Saudi Arabia in November 1986.

In Saudi Arabia, she was invited to King Fahd’s palace – a rare honour for a woman – although she was not allowed to dine with the men.

The Emanuels designed more than 100 outfits for Diana for special occasions and for when she travelled abroad.

The sketches and accompanying letters will  auction is set to take place on September 25. 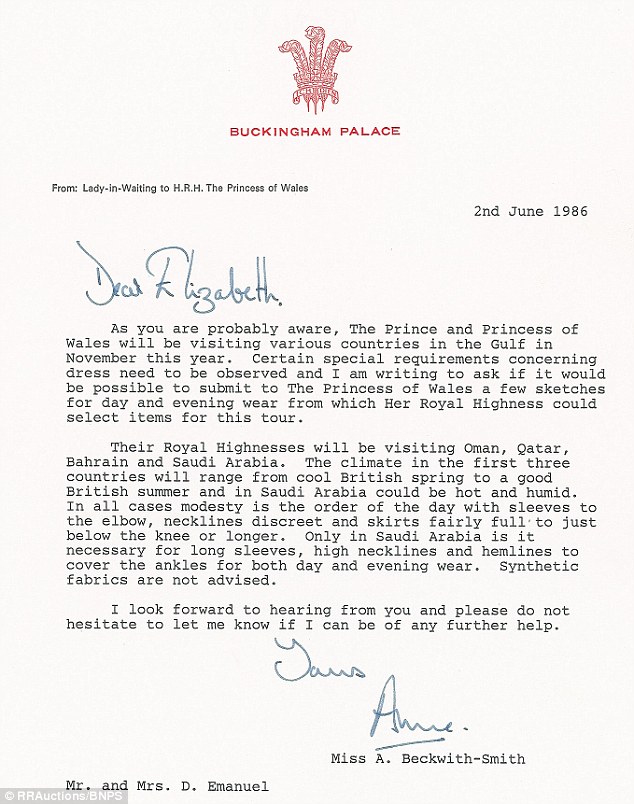 The collection also includes a letter, dated June 2, 1986, sent to the Emanuels by Diana’s lady-in-waiting, Anne Beckwith-Smith, outlining the strict requirements for her garments during the tour (above) 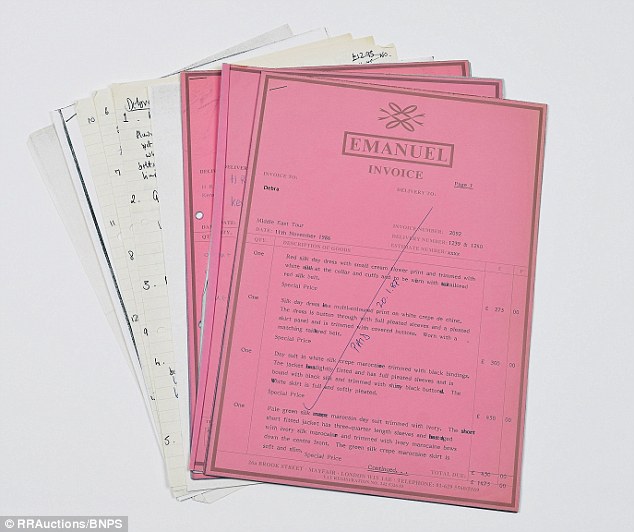 The lot also includes invoices for Diana’s dresses, revealing that they cost between £275 and £450 each