Sky signals the end of the satellite dish

Sky customers will soon be able to get all 270 channels over fibre-optic broadband – in a move that could signal the beginning of the end for the satellite dish.

The move is part of its long-term plan to take on streaming services like Netflix and Amazon.

The telecoms giant said it will offer all of its TV services over the internet via Sky Q in Austria and Italy in 2018 – with plans to roll out the service in Britain later in the year, or early 2019.

Sky has signaled the start of a long-term shift away from satellite broadcasting in favour of fibre-optic. The move represents the beginning of the end for its familiar satellite dishes as it shifts all of its channels to broadcast fibre-optic broadband

Jeremy Darroch, Sky’s chief executive, said today it would allow the company to target up to 6m households across Europe who are unwilling or unable to have a satellite dish.

‘This is the first time we have been able to offer the full Sky TV service without a satellite dish,’ he said, according to the Guardian. ‘It is a big moment for the business.’

The move will strengthen Sky’s hand in its battle with streaming operators like Netflix and Amazon Prime as well as rival BT.

Although television viewers who use the Now TV box can already access some Sky channels over the internet, this would be the first time the full 270 channels would be broadcast in that way.

It hopes that making its hundreds of channels more widely available will increase both revenue and profits.

Sky will also be launching a loyalty programme to reward longer term customers, the Guardian said. 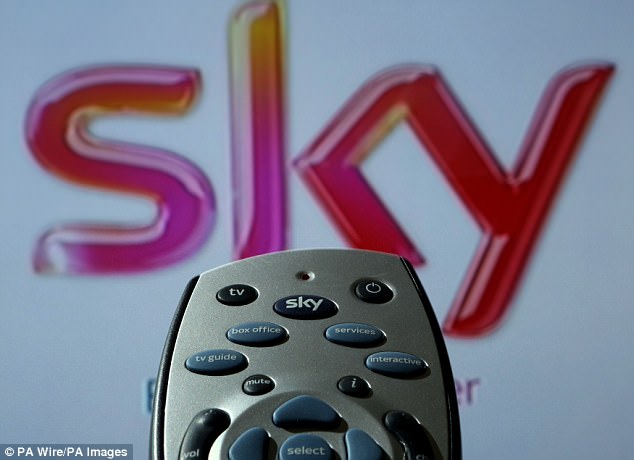 Sky’s half-year earnings slipped 9 per cent after they paid millions of pounds for broadcast rights to Premier League football matches.

The telecoms and TV giant’s total operating profits in the last six months of 2016 were down £65million on a year earlier, coming in at £679million.

As part of a £5billion deal in 2015, Sky spent an additional £314million on Premier League broadcasting rights in the final six months of last year.

In the UK and Ireland, Sky’s operating profits fell 18 per cent to £620million.

Mr Darroch, said: ‘In a year in which we are absorbing significantly higher programming costs, as a result of the step up in Premier League costs, our financial performance has been good.’

Over 11 per cent of Sky’s customers moved to another provider in the last 12 months, up from 10.2 per cent a year earlier.

Sky said the higher number of customers moving to other firms reflected an ‘increased proportion of broadband customers now making up our total customer base – who have a greater propensity to switch providers – and the highly promotional environment we are operating in.’

While losing more customers than a year ago, Sky said it signed up 205,000 new customers in the UK and Ireland in its first half, driven by strong demand ahead of Christmas, when an extra 1.2 million products were sold.

In a bid to improve customer retention, Sky is launching a loyalty scheme in the UK this year, after testing it out in Italy last year.

Sky’s results today showed the group saw a 4.8 per cent rise in revenues for the UK and Ireland, with overall revenues 6.2 per cent higher than a year ago.

He added: ‘We were disappointed by the failure of the directors charged with looking after shareholder interests not to secure an improved price for what is after all a unique asset in a consolidating market place.’

The results come a day after Sky announced it is increasing the price of its line rental by £1.59 a month from March, bringing the annual cost up to around £227.

Sky was previously embroiled in a row with US media giant Discovery Communications, meaning customers could have lost 12 TV channels, including TLC and Eurosport.

Discovery threatened to withdraw its channels over claims that it ‘refuses to pay a fair price’.

While Sky accepted an £11.7billion takeover offer from Rupert Murdoch’s 21st Century Fox, which already owns 39 per cent of the company.

Approval of 21st Century Fox’s proposed takeover is likely to come in the first half of 2018 – in a sign it is gearing up for wider review of the merger.