The land of the rising sun is rich in culture, cuisine and contradiction.

Shut off from Western influence for the best part of 250 years, 21st century Japan still retains close ties with its history and tradition. Ultra modern – the 200mph bullet train – happily rubs shoulders with the 14th-century temples and shrines created for Shoguns, emperors and Buddha.

Haute cuisine includes squid balls, Kobe beef and sushi that can take you to the point of asphyxiation, but hopefully not kill. 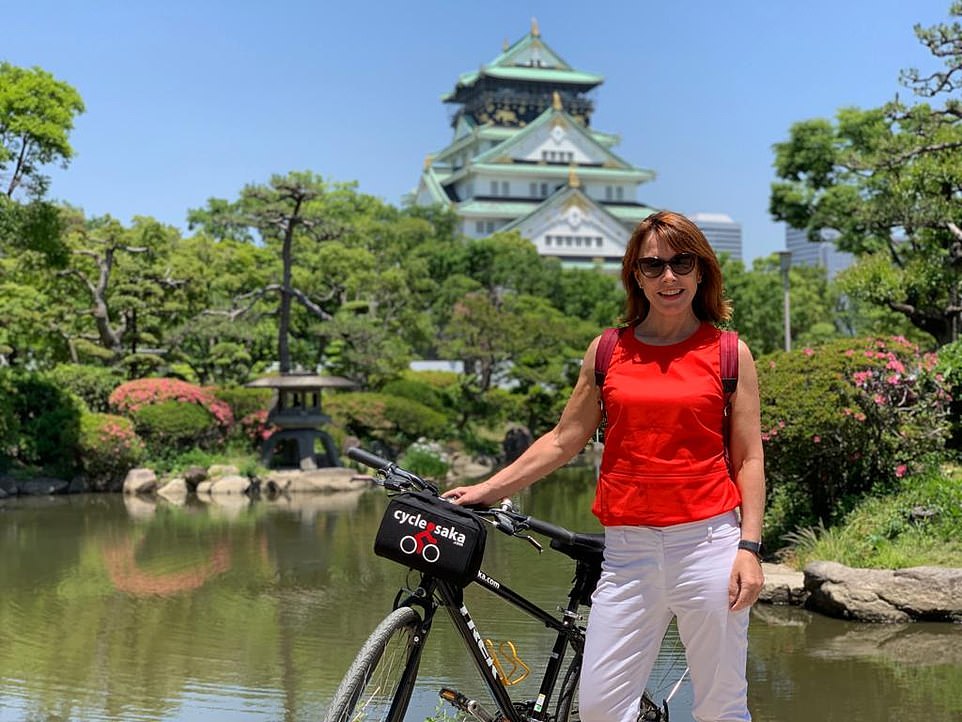 Pedal power: Cycling is a great way to explore Osaka, as Kay discovered

Then there’s the contradiction – ultra-formal buttoned-up taxi and train drivers wear white gloves and bow constantly while transporting their passengers to popular cuddle cafes for strangers or love hotels for those who know each other a little better.

Japanese timetables operate to the second, whether it’s the bullet train, a restaurant reservation or even a hotel check-in as we discovered when arriving at the reception of the Osaka Marriott after an overnight British Airways flight – a new direct service from London Heathrow.

With four hours to kill before we could offload our luggage we sought guidance from the concierge. Charming and knowledgeable she suggested either a trip to Hiroshima, too far, or scampering up nearby Mount Ikoma, a metro and a train ride away. We chose the latter. 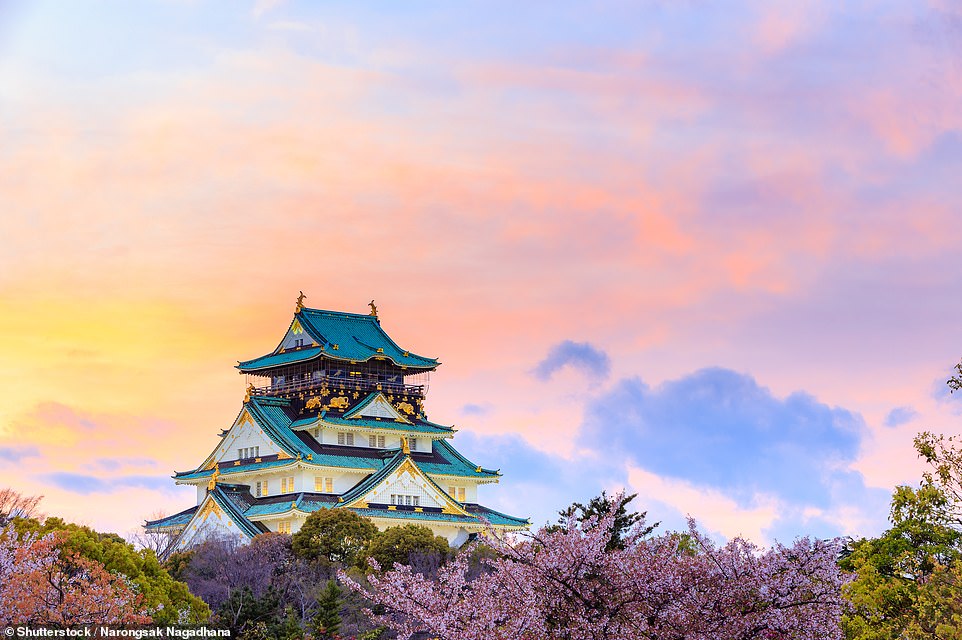 Osaka’s castle, pictured here during cherry blossom season, is one of the city’s top attractions

The literacy rate in Japan is pushing an impressive 100 per cent, but be aware they do not routinely use the Roman alphabet. Instead, you are likely to be greeted by a bewildering mixture of 2,800 adopted Chinese symbols.

The quaint British tradition of saying the same thing repeatedly, but slower and louder each time, doesn’t work either. Thankfully, our concierge provided us with a useful print out of photographs and symbols we could brandish to ever-helpful commuters and cab drivers.

Cycling is very popular with tourists to Osaka, offering a time-efficient way to visit numerous landmarks including the city’s world-famous castle, the site of which played a major role in uniting 16th century Japan. 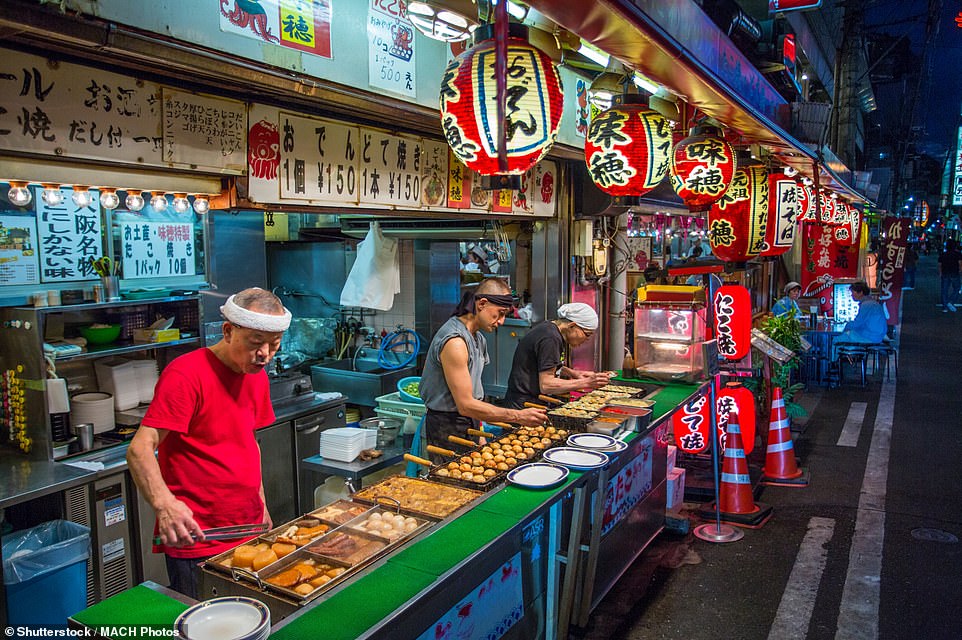 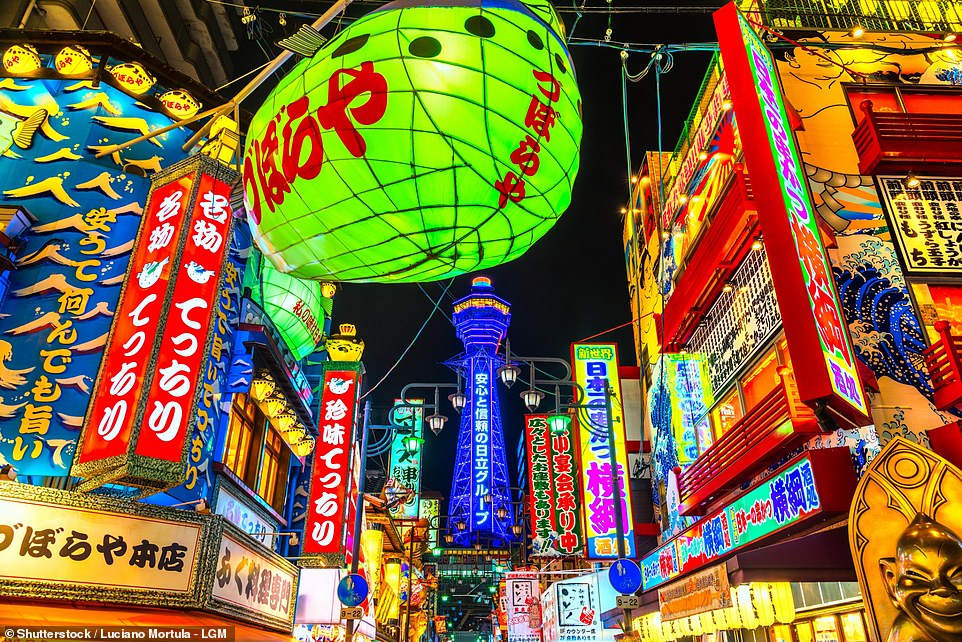 Pictured is the Tsutenkaku Tower in Osaka’s Shinsekai district. It is one of the city’s most well-known landmarks

British Airways flies from London to Osaka from £582 including taxes, fees and carrier charges.

Pedal power (you can ride on the pavement by the way) also offers a great way to work off some of the calories you’ll cram in. Osaka is known as Japan’s kitchen and for some of the best fare head to Dotombori, but don’t be British and just join a queue of other tourists.

Instead, go to Osho for Gyoza (dim sum); Wanaka for Takoyaki (squid balls) and Warai for Okonomiyaki (pancake). However, I’d recommend steering well clear of the puffer fish sushi. If not prepared meticulously, there’s enough toxin in one fish to kill 30 humans – and there’s no antidote!

Osaka will be host to this year’s Rugby World Cup and this month’s G20 summit. If you’re visiting for either be advised that while stagflation has made Japan much more affordable for Westerners you’ll still need plenty of cash – credit cards are not routinely accepted and WiFi is so so.

Nearby Kyoto – Japan’s ancient capital – offers a quieter alternative to those wanting to enjoy a world heritage site or two. There are a total of 17 you can visit, in fact, along with 2,000 Buddhist and Shinto temples – thanks to American Henry Stimson.

Kyoto and not Nagasaki had been slated as the World War II target for the A-bomb, but Stimson, the War Secretary, saw Kyoto as a cultural treasure and not a military target. The generals disagreed and so Stimson appealed directly to President Truman to save the city. 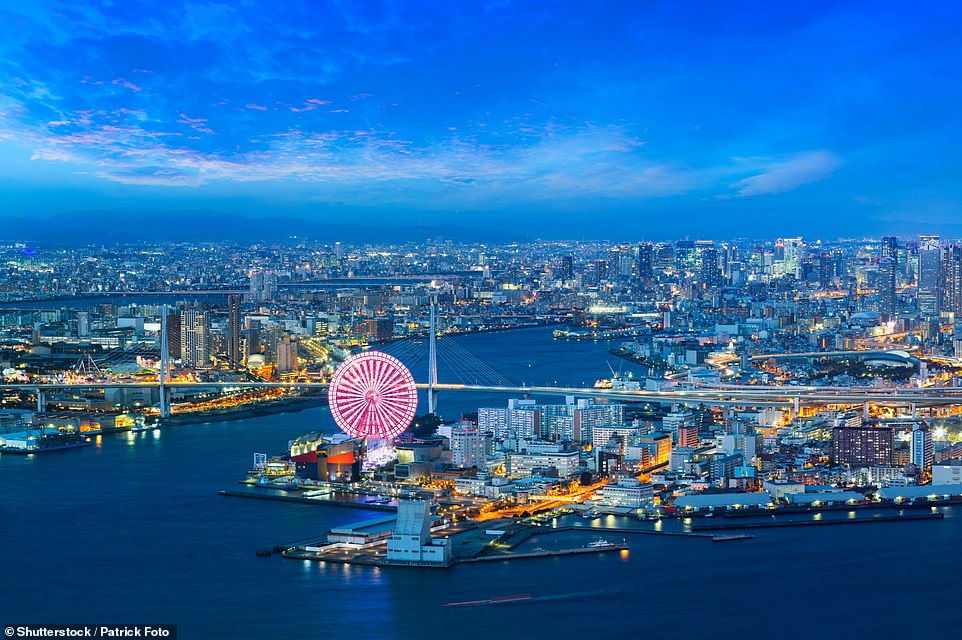 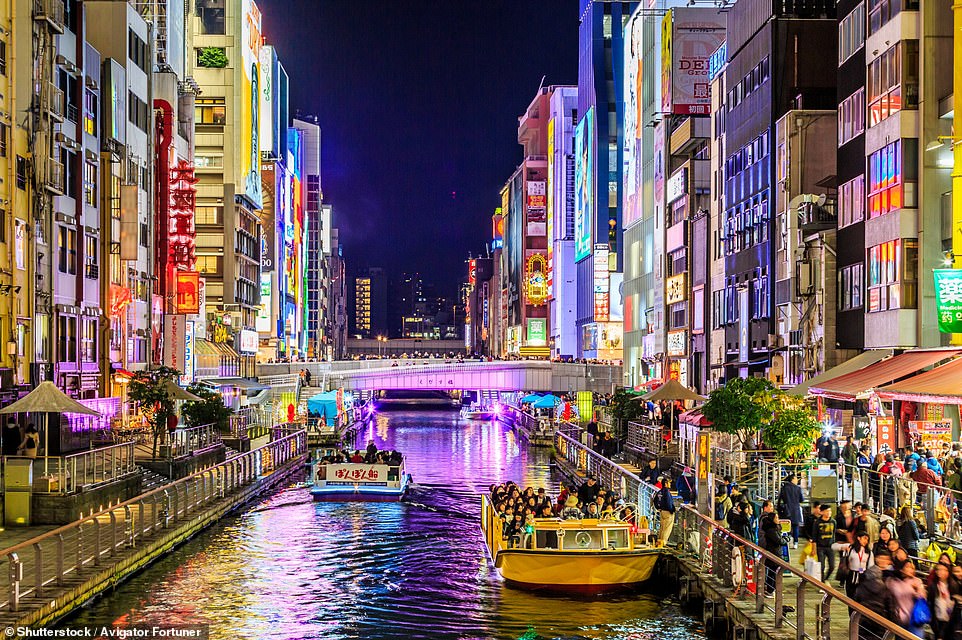 Tourists night shopping at Dotonbori, a canal district that’s one of Osaka’s most famous destinations 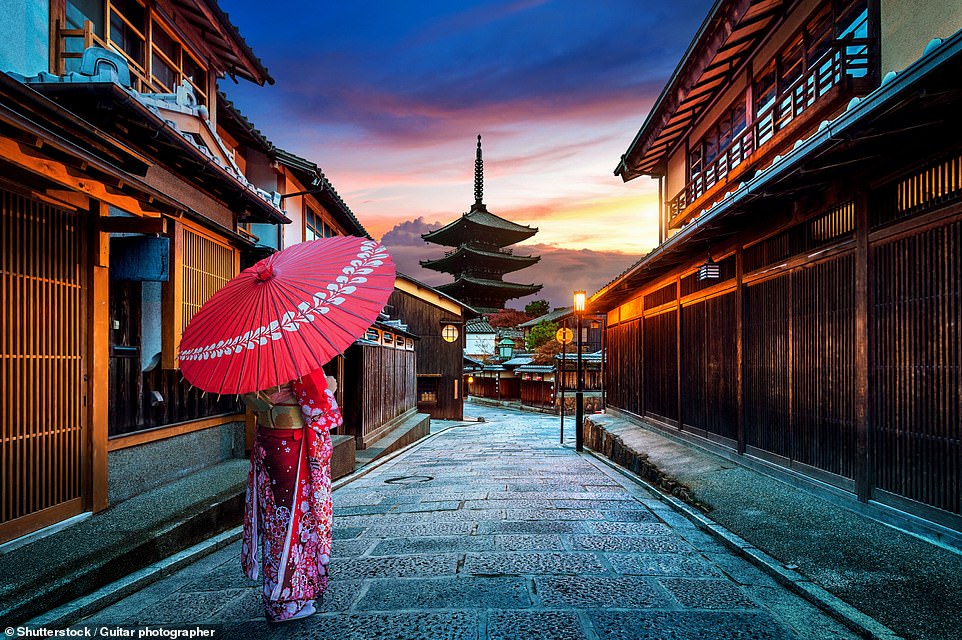 Kyoto (pictured) – Japan’s ancient capital – offers a quieter alternative to Osaka to those wanting to enjoy a world heritage site or two. There are a total of 17 you can visit 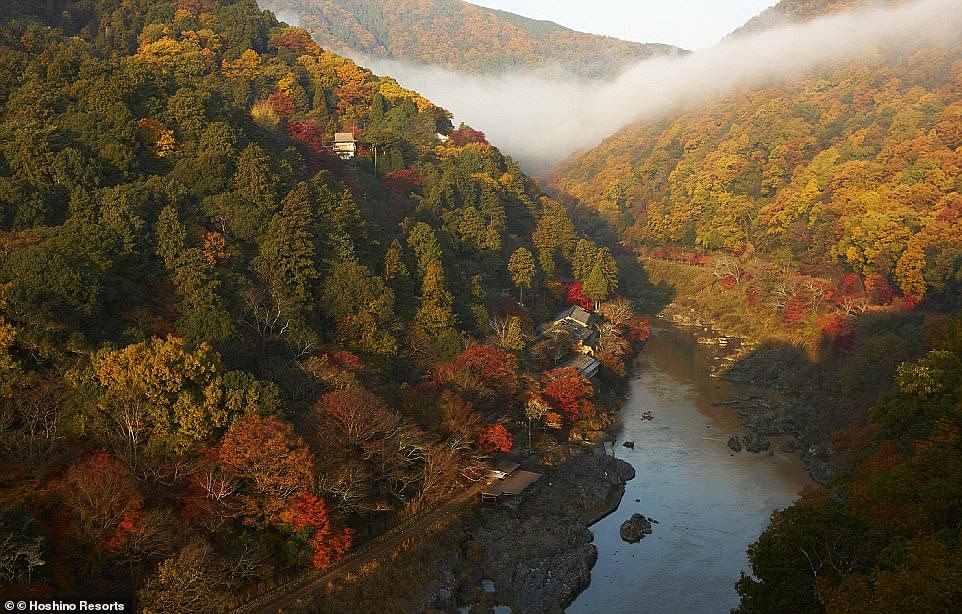 Kay stayed at Kyoto’s Hoshinoya hotel (pictured), ‘a riverboat ride from the bustle of the city and a world away from western culture’ 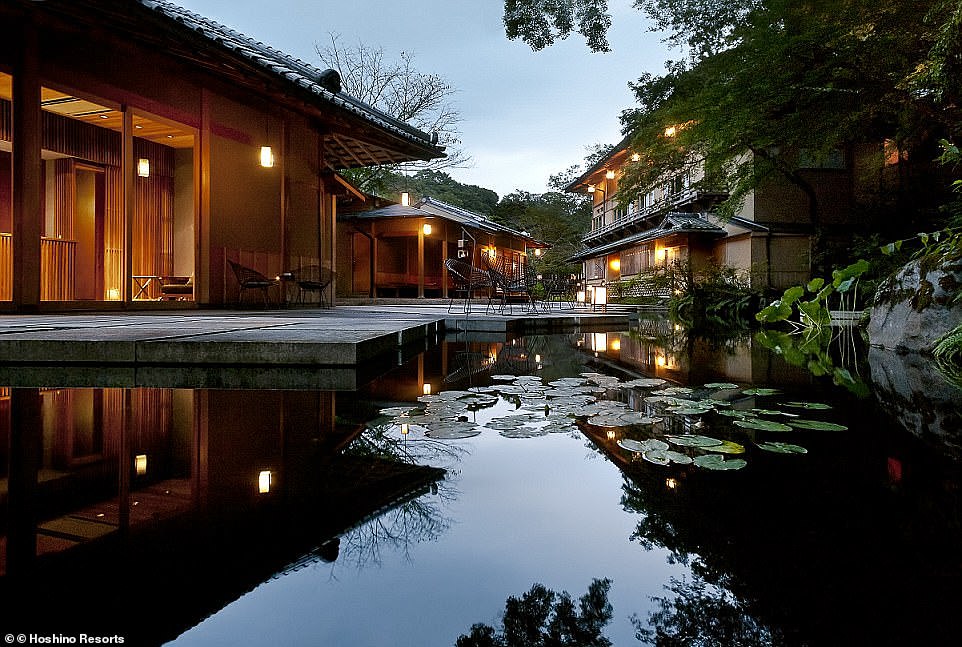 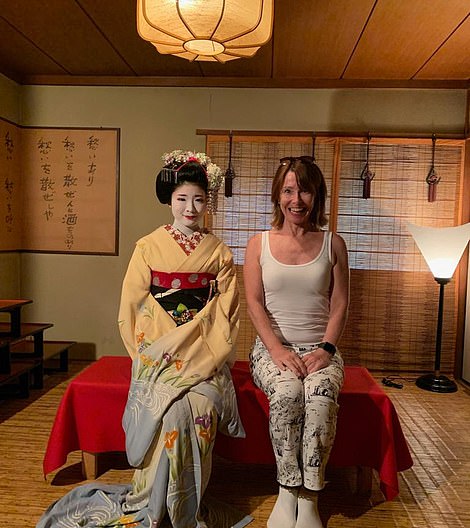 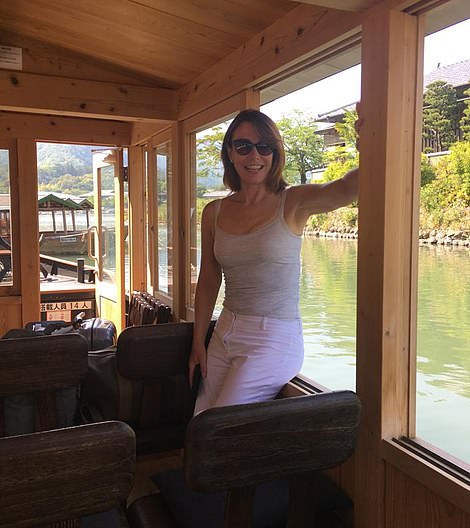 Truman conceded and as a result sealed a desperate fate for the residents of Nagasaki and Hiroshima, but ensured that tourists could continue to enjoy the standard bearer for Japanese culture.

If you have time do pop in and meet a Geisha. They are exquisite, almost doll-like young women with porcelain skin and coal black hair who offer a fascinating window on an ancient tradition. Don’t expect tea – Japanese are coffee drinkers with 85 per cent of Jamaica’s coffee production finding its way east.

Also try to stay at a ryokan, a traditional Japanese Inn. We stayed at Hoshinoya, a riverboat ride from the bustle of the city and a world away from western culture. The hotel’s Kodo ash pot incense ceremony made me feel like I never wanted to come home.