Vicky Cilliers had a terrifying sixth sense she should not jump on the day her husband tried to kill her, she has revealed.

She believes a guardian angel – her mother Veronica who died of bowel cancer when her daughter was just 16 – saved her from certain death.

‘I think my mum was up there looking after me. Physics can’t explain how I survived, so something else has to.’

Vicky, a veteran of 2,600 jumps, explained: ‘I felt a catatonic fear as the aircraft doors were closing, like nothing I’d ever known before.

‘If I had listened to my instincts, I would not have got on the plane for the “hop and pop” [parachuting slang for when jumpers deploy their chutes as soon as they leave the aircraft]. All the way up to our jumping altitude of 4,000ft, I knew I should not be jumping, I just didn’t understand why.’ Her memories of what followed are hazed by the trauma and by the ketamine and morphine administered when she hit the ground. Her injuries included a broken pelvis, broken ribs and fractured spine.

A double parachute malfunction is so rare there had not been one in Britain for 30 years.

It happened on Vicky’s fateful jump on April 5, 2015, because her husband Emile had tampered with her main and reserve canopies to ensure that neither deployed correctly.

Having taken Vicky’s parachute rig to a toilet cubicle at Netheravon airfield in Wiltshire, he tangled the lines of the main canopy and removed vital links from her reserve so it was not properly connected to her harness.

As a result, Vicky found herself unable to control her main parachute. So she cut herself loose and deployed her reserve canopy. But when it opened, she started spinning with increasing speed. She had just seconds to save herself.

She said: ‘I was diving down, down towards the ground. Annoyance turned to anger and then fear, but panicking gets you nowhere. 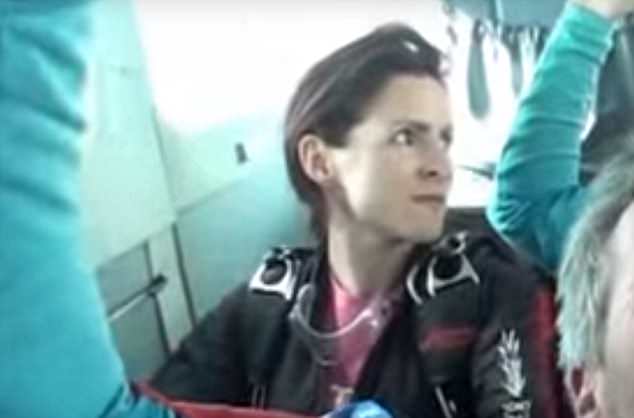 Vicky about to do a jump from a plane. She is a veteran of an astounding 2,600 jumps

‘I told myself, “I have to fix this: failure is not an option.” I’m a mother, I could not even let myself think I might die.

‘I had no sense of that earth approaching because I didn’t look down.

‘I knew what I needed was something functioning above my head so my sole focus was above, not below. I had no idea about the time to impact.’

She was saved by three things: her expertise, her light weight (she is eight stone) and the fact she was cushioned by a ploughed field. Even so, her survival is miraculous.

‘I remember nothing about hitting the ground except a metallic bang.

‘I came to and was able to wiggle my fingers and toes which made me think, thank God, my spine is intact.

‘But I wasn’t proud of myself because I had never considered not surviving.’

Now she is planning a jump to raise funds for the air ambulance which flew her to hospital.