A Nebraska woman spent three hours dangling 70 feet above the ground after she panicked during her first solo-skydive and crashed into a tree.

Abbey Lacy, of Omaha, has done tandem jumps before but on Saturday she attempted her first static line skydive.

She said everything was fine, until she lost communication with the person on the ground radioing her instructions on where to maneuver her parachute.

‘I panicked because I saw the treeline getting closer,’ she told WOWT, ‘and then I braked and went down and I knew I was gonna hit the tree.’ 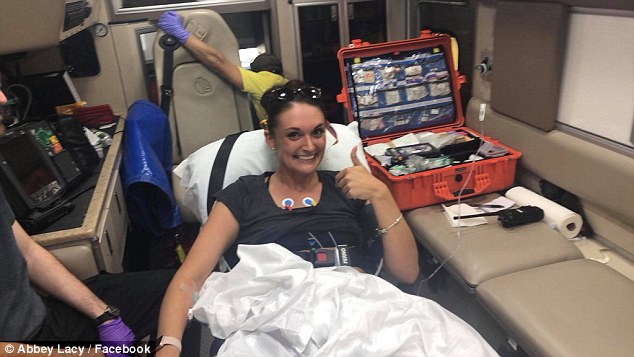 Lacy was on her first solo-skydive when she panicked and landed in a tree in Omaha. Rescue crews are seen trying to use a tall ladder to get to her 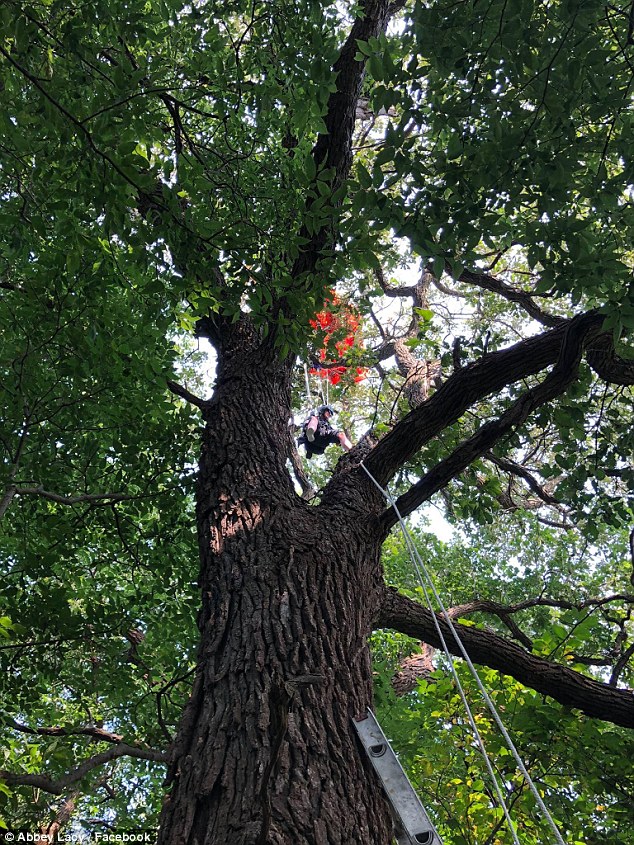 It took rescue three hours to reach her. Lacy said during the first 90 minutes she was doing OK but after she started to lose feelings in her legs she started to feel lightheaded Lacy said when she first landed in the tree she wrapped her arms and legs around a limb, but they eventually went numb. She said she was forced to let go and dangle 70 feet in the air as she waited for rescue crews to get to her, the Omaha World-Herald reports.

It took firefighters three hours to get Lacy down from the tree.

She told WOWT that rescue crews initially ran into trouble because they could not get their tall leaders to the tree she was stuck in. They eventually had to use a chainsaw to cut parts of the tree away so they could get the ladder closer.

They also had to have workers from the Omaha Public Power District come and turn off the overhead power lines that were preventing the rescue.

After hours of dangling firefighters were able to get the ladder underneath Lacy, cut her off her parachute and get her down.

Lacy said during the first 90 minutes of the ordeal she was OK. Members of a local parachute club were on the ground shouting encouragement to her and reassuring her she was going to be fine.

After awhile, however, Lacy said her legs went numb because the harness from her parachute was cutting off her circulation and she was starting to feel lightheaded. She said she was also worried because she felt the parachute cords slipping.

After she was rescued, Lacy was taken to the hospital to treat some cuts and bruises. She said doctors told her she damaged nerves in her right leg, but she’s expected to make a full recovery. 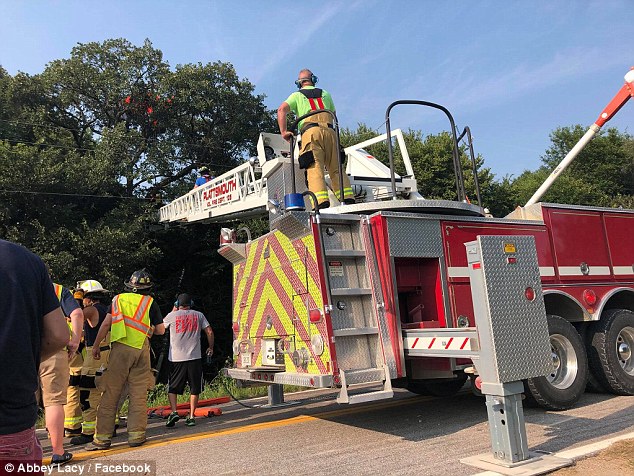 Lacy has skydived in the past but never did a solo jump before Saturday. She said she plans to get back out there after she’s healed A rescue worker is seen taking Lacy down from the tree. They had to cut away portion of the tree to get the tall ladder underneath her 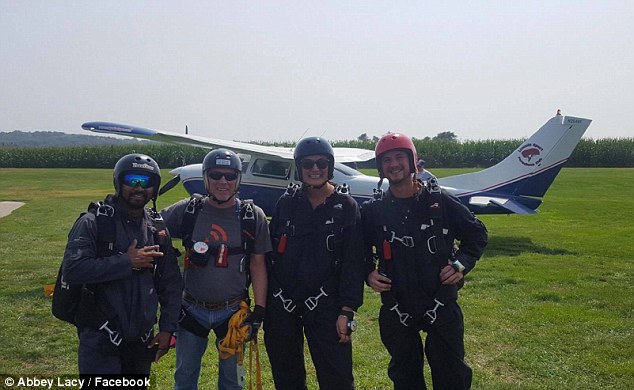 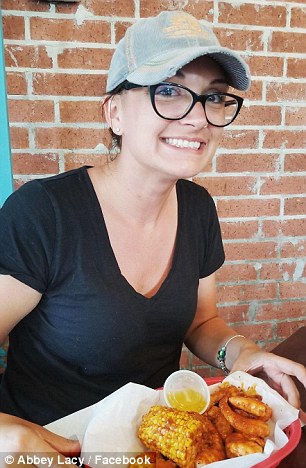 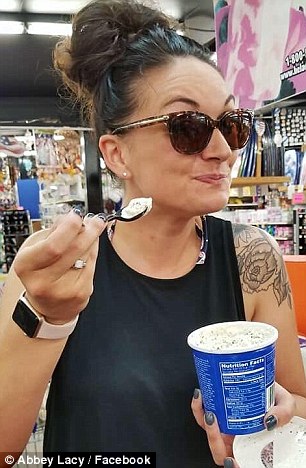 ‘It was the most terrifying and painful thing that I’ve ever experienced,’ she wrote on Facebook saying that she plans to skydive again

Lacy updated her friends and family on her situation in a Facebook post on Saturday night, ensuring everyone that she was doing OK.

‘It was the most terrifying and painful thing that I’ve ever experienced. I wish I could remember the names of all of the people that helped me today. Every single person was incredible. From all of the amazing people at Lincoln Sport Parachute Club who waited the entire time with me, talked to me, kept me strong, and have continued to reach out and check on me throughout the evening, to the firefighters, EMT’s, and various other rescue personnel that talked me through the whole thing and cared for me after. Every single one of you was amazing,’ she wrote.

‘You saved my life today. Thank you all from the bottom of my heart. I’m okay! I’m at UNMC tonight with bumps, bruises, cuts, scrapes, and a leg with some pretty serious nerve and muscle damage. But I’m okay! And as soon as I’m better I’ll be back out there!’