The first thing that hits you when you walk on to the Prague set of Britannia, Sky’s new Roman invasion epic, is a terrible malodorous pong. Then there’s the thick morning mist, intermingling with the smoke from the braziers, the wooden-wheeled war machines and the chariot-busting ten-foot spikes surrounding a military camp.

It’s a serious assault on the senses.

‘Sorry about the smell. It’s horse s***, basically,’ says David Morrissey, in full general’s uniform behind a desk covered in scrolls. ‘Freshly delivered on site thanks to all of these…’

Kelly Reilly as Cerra, warrior princess. ‘Except I wouldn’t really call her a princess,’ says Reilly. ‘To me that conjures up pretty people in castles. This is not like that. It’s dark and dirty.’

He waves outside his luxurious tent to all of the horses, clomping around in dank woodchips and mud. Most of them are tethered next to tents, surrounded by pikes, catapults and ‘scorpios’ (a sort of torsion-powered mega-catapult, like the dragon-killing weapon in Game Of Thrones.)

The tents, which run back for hundreds of metres, are all in straight lines – a sign, if you hadn’t guessed it already, that this is a Roman camp. It’s cold, too: beneath his woollen tunic, resting on his leather-studded skirt, Morrissey has a hot water bottle.

‘We’ve been shooting for five months,’ he says. ‘A few weeks ago it was boiling hot, we were cursing the heat, and now we’re cursing the cold. But that’s fine – from a Roman’s point of view, Britain in 43 AD is supposed to be hell on Earth.’

There’s a coffee cart 100 yards’ walk from Morrissey’s tent, but in every other aspect this could be Britannia in 43 AD. Britain, of course, was the one place that Julius Caesar couldn’t conquer. In that year the Emperor Claudius sent Aulus Plautius (Morrissey’s character) to lead an army to have another go. Britannia tells their story.

‘But the crucial thing to remember,’ says Morrissey, ‘is that the all-conquering Roman army had failed here before. So the soldiers were frightened of it. They’re coming to a strange, savage place.’ 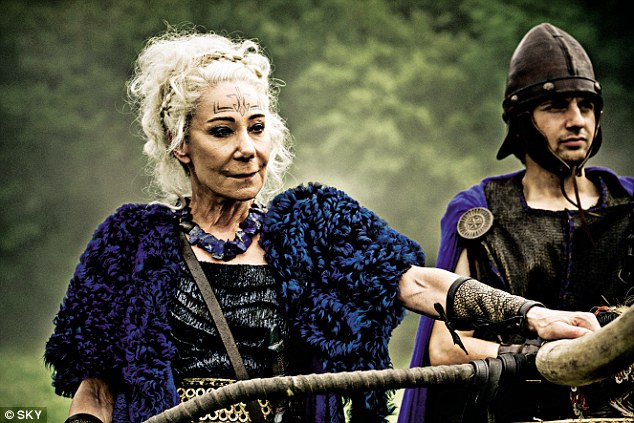 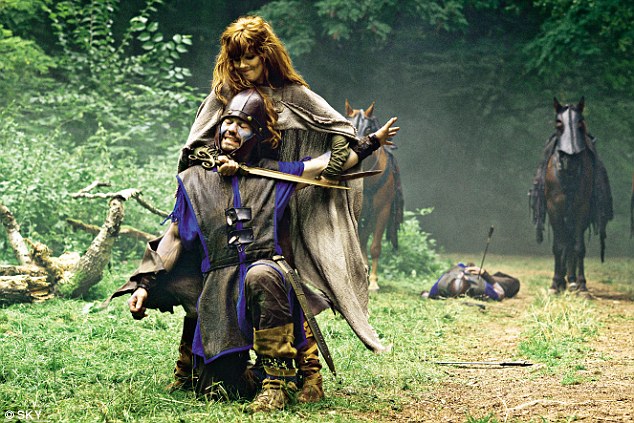 Cerra shows her mettle. The drama follows a long feud between the Regni and their Celtic rivals the Cantii 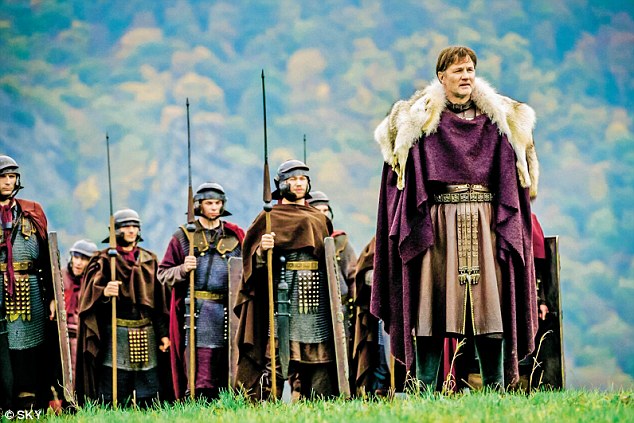 Britannia is set in 43 AD. In that year the Emperor Claudius sent Aulus Plautius (Morrissey’s character) to lead an army to have another go. Britannia tells their story 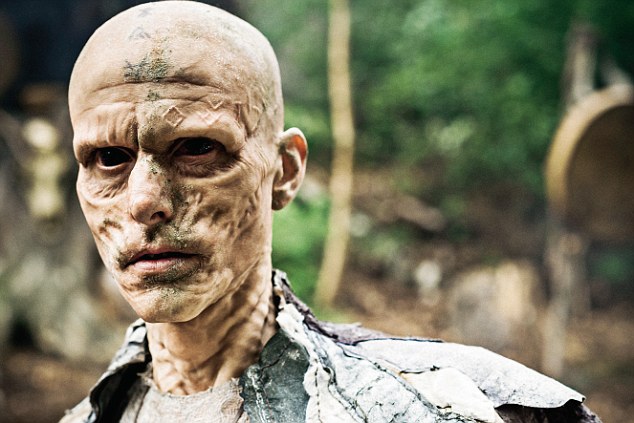 Mackenzie Crook as druid leader Veran. We don’t speak to Crook on set but only because he’s rarely there – every day involves four hours in make-up

On the way to the Roman camp set we drive by what looks like a whole field of smouldering remains. ‘That was the Regni camp,’ says production designer Tom Burton. ‘Yesterday we burned it down. It was all catapults and immolation.’

The Regni were one of the two main Celtic tribes the Romans came up against when they invaded the Kent coast and set off inland to conquer southern England. Zoë Wanamaker, head to toe in leather with her face tattooed and her hair rising high like a halo (‘think Tina Turner in Mad Max,’ she laughs) plays their queen, Antedia. ‘Basically I want Kelly Reilly’s head on a pike,’ she says. ‘She castrated my son on their wedding night. Mums don’t tend to like that.’

The incident she’s referring to is the source of a long feud between the Regni and their Celtic rivals the Cantii, whose king is played by Ian McDiarmid, aka the emperor in the Star Wars movies. Kelly Reilly plays his daughter Cerra, a fierce, headstrong warrior princess. ‘Except I wouldn’t really call her a princess,’ says Reilly. ‘To me that conjures up pretty people in castles. This is not like that. It’s dark and dirty.’

What Britannia decidedly isn’t is Game Of Thrones. It doesn’t have the same money, says producer Rick McCallum (‘they have five to six times the budget we do’) and anyway, says writer Jez Butterworth, he’s never watched Game Of Thrones.

‘I don’t have time,’ he says, ‘what with kids and everything else going on.’

Watch the first minute of Britannia and it’s clear that the series is something very different to Thrones – there are horses and mud and swords and devilry, but this is way weirder than Westeros.

Morrissey explains: ‘Yes, this is the invasion where the Romans work with the two tribes, the Regni and the Cantii, to conquer Britain. But there’s a third element, the druids, and that’s where things get interesting. My character’s quite obsessed with them. It’s quite odd. You feel that although he’s supposed to be at the sharp end of the Roman conquest, his main objective is to find out what the druids’ belief system is.’

Watching Britannia you feel that the druids are Butterworth’s real interest too. Every scene involving Mackenzie Crook as Veran, the druid leader described as ‘having the wisdom of the Dalai Lama mixed with the madness of Charles Manson’, is shot like a dream.

We don’t speak to Crook on set but only because he’s rarely there – every day involves four hours in make-up. Producer Rik McCallum tells us how Crook shaved his head and even drilled holes in his nails for the part, before an entire facial prosthetic and contact lenses transformed him in to the druids’ spooky leader.

It’s Veran who leads the more prosaic characters, like Aulus, on their trippy voyages into the underworld, which are shown as spiritual, hallucinatory excursions that are more like prog-rock videos than historical drama.

‘I’m as interested as the next person in historical events,’ says Butterworth, ‘but turning it in to drama? I’m not interested in that remotely. If you want something to be historically accurate I’m not sure that long-form television drama is the place you should go for it. For me, there’s got to be a really good and personal and quite visceral reason to want to do it,’ he says, adding that this is his very first TV drama. ‘The reason was this: I wanted to explore the idea of these two pantheons of gods – Roman and druid – coming together.’

‘One thing you know about Jez,’ says Morrissey, ‘is his knowledge of pre-Christian, pagan Britain is massive. So he’s able to draw on that. Mackenzie Crook is amazing. He looks fantastic but he also has that spiritual, worshipping side and that belief that the gods and the power that they have over us is real. It’s about hell and heaven, where you’re going, the life before you and the life after you.’ 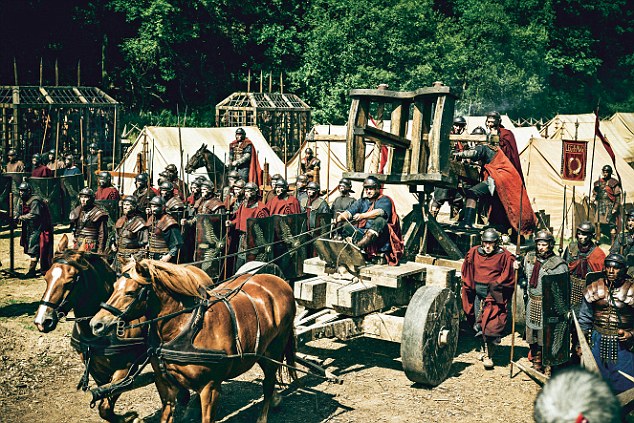 Yet Britannia is also, says series producer Rick McCallum, about Britain today. ‘We’re definitely in the wackiest of times politically. In Britannia’s world you have three divergent peoples, all of whom have moral codes of behaviour that are at odds with each other. If you look at the world we’re living in right now, whether it’s the American election or Brexit, it’s very apparent that there are some very strong groups of people with incredibly divergent points of view. It really is tribal.’

Back on set it’s dark now. The braziers are lit and extra artificial smoke is wafted across the camp. Morrissey is addressing his men. ‘I am Rome,’ he bellows. ‘And where I walk is Rome.’

He’s about to find out what Britannia has to say about that.