Darrell Houghton and Jackie Judge used Rottweilers to intimate the men to catch the chickens, which lay eggs for the suppliers of the Happy Egg Company, Gü Puds and Big & Fresh brands.

The cruel duo would withhold the small amount of wages they would pay the ‘workers’ if they even so much as left a dirty cup in the sink at their Kent farm’s lodgings.

Houghton and Judge, who ran DJ Houghton Catching Services, hired out their Lithuanian slaves to unsuspecting poultry farmers all over the country, to catch and move the hens.

And one of the companies which they supplied was Noble Foods – the parent organisation of several major retailers – which has not specified which of their brands used Houghton and Judge’s eggs.

Their chicken-catching company was initially raided by the Gangmasters Licensing Authority in 2014 but police dropped criminal charges against them saying there was insufficient evidence of criminal action.

But Houghton, who was the director, and his partner Judge, who was the company secretary, were ordered to a pay six Lithuanian workers £1 million in compensation for loss of wages and poor working conditions after they brought a High Court action.

The court found that the number of hours worked hugely exceeded the ‘entirely fictional’ number of hours recorded on payslips and that wages were withheld as a form of punishment.

The workers, who said they were trafficked from Lithuania, claimed they were harassed, assaulted, and threatened by supervisors and housed in ‘appalling conditions’.

Chickens were captured by the slaves at farms nationwide, to supply businesses such as Noble Foods, a leading egg producer and owner of the Happy Egg brand.

Workers said they were punched and taunted and that there was no respite from the harassment because they were housed in accommodation which the couple had constant access to – and would threaten them with aggressive Rottweilers.

The workers were forced to sleep in the back of a mini-bus between farms and were controlled by a specific Lithuanian ‘enforcer’ who would threaten to put them on the street if they stepped out of line. 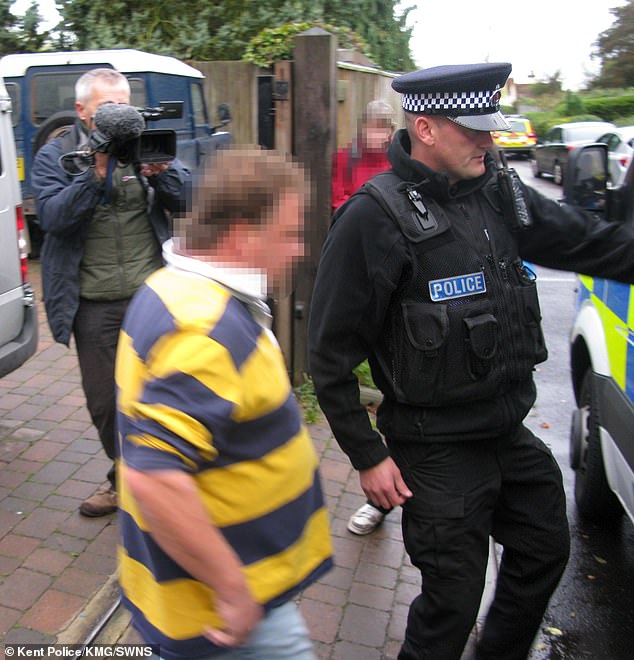 Darrell Houghton being arrested by police during the raid in 2012

In 2016, the High Court found that the company had failed to pay workers according to minimum wage requirements, had made unlawful deductions from wages, and had failed to provide adequate facilities to wash, rest, eat and drink.

Following the £1 million settlement reached in December 2016, the claimants have been able to return to visit family in Lithuania.

The judgment delivered this week follows a four-day issue trial and summary judgement application in February, in which the workers gave evidence of their appalling living and working conditions, and how their wages could be withheld for entirely spurious reasons, such as leaving a cup in the sink.

On Monday the court found the company was liable for serious contractual and statutory breaches, including the failure to pay the applicable minimum wage, the charging of unlawful ’employment fees’, the arbitrary withholding of wages, and the failure to provide holiday pay.

The court also ruled that Houghton and Judge were personally liable to the workers for the contractual breaches of their company.

Honourable Mr Justice Lane said that Houghton and Judge ‘cannot have honestly believed that what was being done by them to the chicken-catchers was morally or legally sound.’

The judgment opens the way for the workers to claim compensation directly from the couple.

Mary Westmacott, the solicitor representing the claimants, said: ‘This judgment is a salutary warning to company officers that they may be made personally liable for exploitation of their workers.

‘I’m delighted that the individuals responsible for my clients’ appalling exploitation have finally been held to account in court.

‘This case highlights how victims of modern slavery are hidden in plain sight in the UK.

‘Everyone can help prevent this abuse by being vigilant and reporting it.’

The couple and their Lithuanian middle-man Edikas Mankevicius are still facing a criminal trial in Lithuania, due to begin on September 3.

A spokesperson for Noble Foods said: ‘The welfare and treatment of all employees – whether directly or through third parties – is of paramount importance to Noble Foods.

‘When we were originally alerted to the situation with DJ Houghton Catching Services in 2012, we immediately and permanently terminated their services.

‘The case served as a watershed moment for us and since then we have built stronger and closer working relationships with the Gangmasters and Labour Abuse Authority and Association of Labour Providers, who have helped us review and shape existing company systems and procedures to ensure that strict protocols are adhered to by all contractors.’