‘Messi just left! Some of them didn’t even shake our hands. It was sad’: Slavia Prague hero Ondrej Kolar slams Barcelona stars for snubbing them after Champions League draw

Lionel Messi and Co were held to a surprise goalless stalemate at the Nou Camp on Tuesday night.

Many of the home players stormed off after the game, with Marc-Andre ter Stegen singled out for praise as one of the few who stayed behind to congratulate the Czech outfit.

‘He was waiting for me inside the tunnel,’ Kolar said after the match, as quoted by iDNES.cz. ‘He stopped me and said he hadn’t seen such a good goalkeeping performance for a long time and that it was a pleasure to watch me play well with my feet.

‘He waited for me after the match, which I take as the ultimate award. To hear such praise from such a good goalkeeper, I had goosebumps. It was an amazing experience, but some of the other players.

‘Messi and the others just left – some of them didn’t even shake our hands. It was sad. We were all looking forward to meeting these big players, we wanted to swap jerseys after the match, but they didn’t behave very well.’ 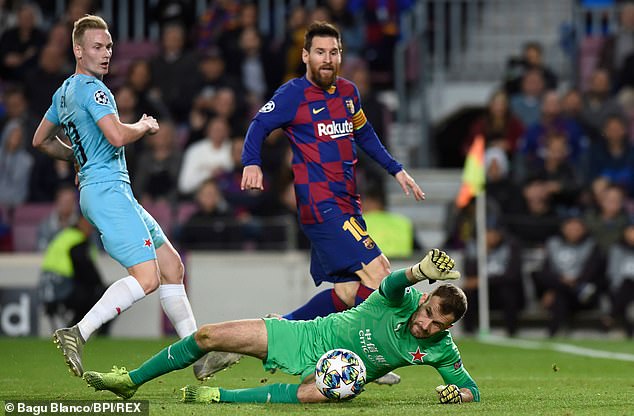