Sleeper cells of terrorists could be inspired to attack UK, security sources warn

Iranian terrorist sleeper cells in the UK could be triggered to carry out attacks as tensions rise over seizing of oil tanker, security sources warn

Agencies believe that the Islamic Republic has funded sleeper cells across Europe, including in the UK.

They rank the country behind only Russia and China as in terms of the threat it poses to national security.

It comes amid heightened concerns in MI5 and MI6 sparked by Tehran’s seizure of British oil tanker Stena Impero on Friday.

Lebanese militant group Hezbollah is linked to radicals that are operating the terror cells, a source told the Daily Telegraph.

Stena Impero, a British-flagged vessel owned by Stena Bulk, is seen at Bandar Abbas port on Friday after being seized by Iran

Counter-terror officers broke apart a cell in 2015 when they found it stockpiling explosives in London.

The source told the paper: ‘Iran has Hezbollah operatives in position to carry out a terrorist attack in the event of a conflict. That is the nature of the domestic threat Iran poses to the UK.’

The Metropolitan Police and MI5 say that cells are widespread across Europe despite the 2015 disruption. They fear that cells in other European countries will be deployed to Britain.

Their thwarting of the 2015 plot only surfaced last month after authorities kept the ‘proper organised terrorism’ secret. 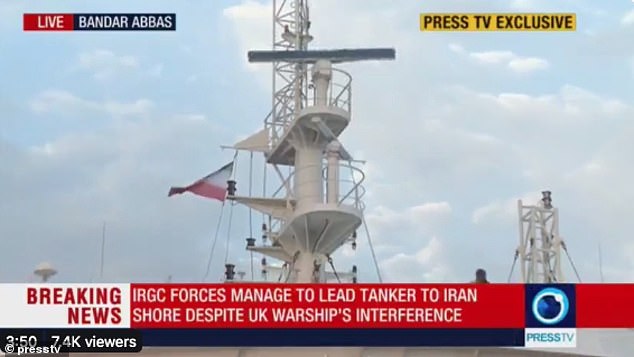 Depleted: How the Royal Navy has shrunk in size in the past three decades

Agents blamed Iran for cyber attacks on the UK in 2017 when MPs and peers were hacked.

The Islamist regime is also thought to be responsible for an attack on local government networks, the Post Office and private companies last year. Those behind the attacks have links to the Iranian Revolutionary Guard.

The Conservative Party is split on the Stena Impero affair as Iain Duncan Smith accused Theresa May of a ‘major miscalculation’ after she turned down help from the US. President Donald Trump pledged to offer protection to British ships in the region.

Meanwhile Chancellor Philip Hammond denied that the government had taken its ‘eye off the ball’ as he spoke to The Andrew Marr Show on the BBC on Sunday. 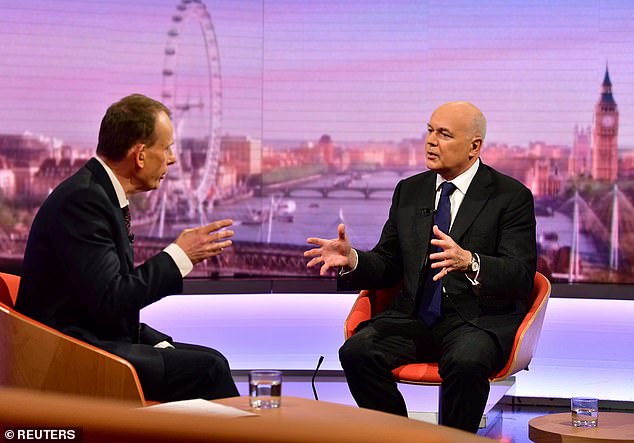 A radio exchange between Iranian armed forces, the oil tanker and a Royal Navy frigate that was unable to assist as it was too far away emerged yesterday.

The recording features an Iranian ordering the captain of the Stena Impero to change its course ‘immediately’.

In broken English, he can be heard saying: ‘If you obey you will be safe.’ Yesterday the Department for Transport revealed a chart showing that the tanker was in Omani waters when it was ‘interrupted’ by the Iranian forces.

The government blasted Iran, accusing it of ‘illegal interference’ over the seizure but said the UK does not seek confrontation. 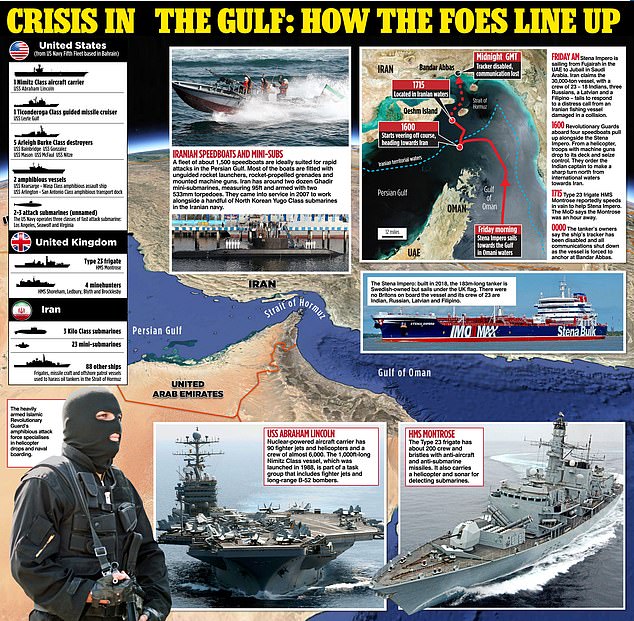 Britain only has the Type 23 frigate HMS Montrose in the region plus four mine hunters, while the US as its Fifth Fleet based in Bahrain – which includes one aircraft carrier, one missile cruiser, five destroyers, two amphibious vessels and two or three submarines