A plus-size YouTuber has slammed Slimming World for suggesting its members should ‘spend less time with overweight friends’ in a handbook.

Harry Jane – who is based in the UK – posted on Instagram a screenshot from a Slimming World guide, consisting of a list of ‘successful weight loss maintainers’.

She explained how her friend had just reached her target weight at Slimming World and was given the book with advice on how to maintain her weight.

Harry described her fury at the final tip of ‘spend[ing] less time with overweight friends’, branding it ‘sick and twisted’.

Posting on Instagram stories, Harry commented: ‘It genuinely makes me mad that a company who promote weight loss through support and friendship can make this remark. 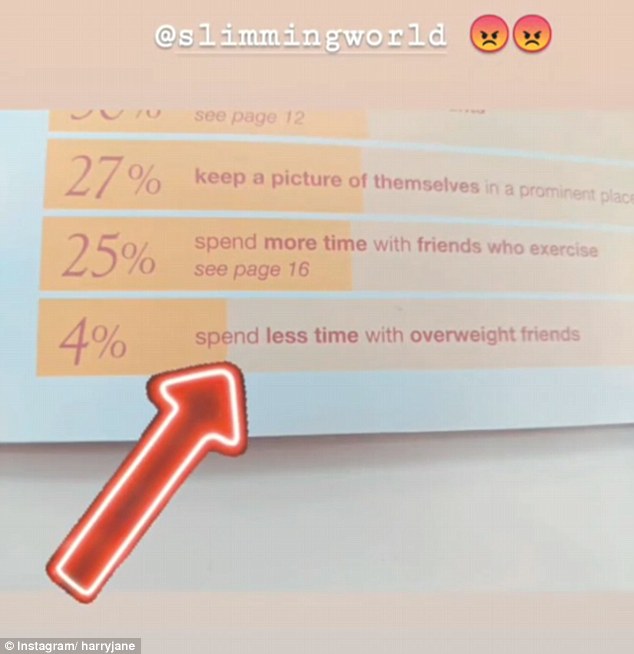 The tip appeared in a handbook given to members who have reached their target weight, to help them maintain their weight loss

‘Just because someone is overweight doesn’t mean they aren’t healthy or are a bad influence?’

She added: ‘I actually don’t understand… It makes me FUME. @slimmingworld you have a lot to answer for.’

Harry said that all the other advice was ‘pretty reasonable’, aside from the final tip that she took issue with.

Other tips include ‘eat a low fat/low energy diet’, ‘have high levels of physical activity’ and ‘have mainly healthy foods at home’. 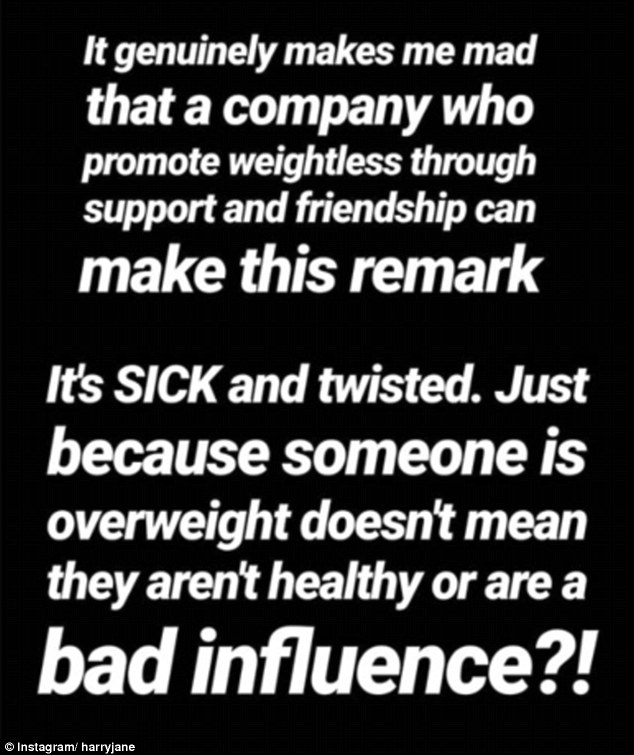 Harry branded the advice as ‘sick and twisted’, adding that ‘just because someone is overweight doesn’t mean they… are a bad influence’

Other social media users appeared quick to agree with Harry’s criticism, with one replying: ‘‘That really is disgusting. They have built a business from overweight people’.

Another added: ‘I followed slimming world for a while and had good results but I’m honestly in shock at this!!! Absolutely disgraceful.

‘Friendship is not measured by weight or appearance whatsoever, what a terrible message!!!’

A spokesperson for Slimming World told MailOnline: ‘This information is taken from the USA’s National Weight Control Registry (NWCR), which tracks the habits of 10,000 people who have successfully maintained their weight loss. 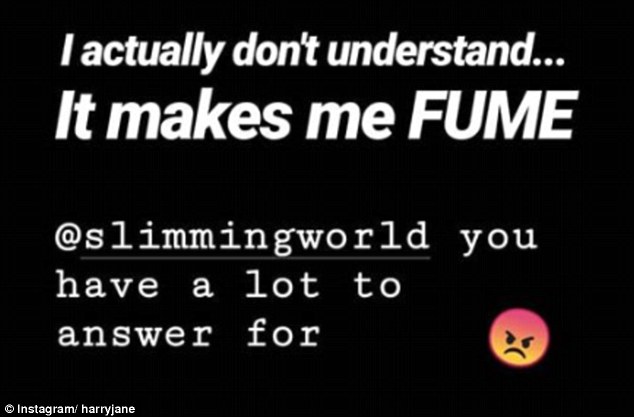 Posting on Instagram stories, she said ‘I actually don’t understand’, adding ‘@slimmingworld you have a lot to answer for’

‘The list starts with the finding that 90% of successful weight-loss maintainers continue to follow a low fat/low energy diet.

‘At the very bottom of the list, at only 4%, is the finding that those who maintain their weight loss spend less time with overweight friends. The Slimming World booklet from which this information is taken goes on to promote and explore more deeply a number of different habits, including becoming more active, eating breakfast and keeping track of food and exercise.

‘It explains that we don’t believe successful slimmers choose to lose old friends, rather that they gain new ones who share their new active habits and healthy lifestyle.’

The spokesperson continued: ‘Slimming World welcomes and supports people at every stage of their weight-loss journey and we work hard to ensure all of our groups are free from judgement and humiliation.’