Slouching could be GOOD for your back

Sit up straight! Stop slouching! It’s a familiar order barked at us since school days – and it remains the golden rule of how to sit.

Whether it’s balancing a book on your head, or imagining a piece of string pulling your shoulders towards the ceiling, we’ve all tried methods to practise ‘good’ posture.

Health officials have long warned that slumping, whether at a computer or in front of the television, is a sure-fire route to crippling back and neck pain – or worse.

How many times have you caught yourself slouched at your desk only to pull back your shoulders and readjust to a ramrod straight posture?

Our dedication to a perfect seated position has fuelled an entire industry, geared to getting us to sit up straight. We spend billions of pounds each year on posture correcting chairs, apps and even clothing – but emerging evidence suggests that slouching may not be so evil after all.

In fact, with research indicating that slumping may help to keep our spines in shape, experts are starting to advise against sitting up straight.

It has been thought that sitting slumped, with the shoulders hunched and back arched, can put excess strain on the vertebrae in the spine.

This is because as the upper body leans forward, the weight of the brain and head increases, forcing the spine to carry a heavier load.

But a slew of studies now suggests this is unlikely to cause the cascade of back troubles previously predicted.

In fact, sitting slumped can keep the spine intact and even ease joint and muscle pain.

In one 2018 paper, slump-sitting postures were seen to help to increase the amount of fluid in between spinal discs, reducing stiffness. The posture was also seen to increase spinal height over time.

Physiotherapists at the University Hospital of North Tees in Stockton-on-Tees who carried out the investigation concluded that some slouching can ‘provide a valuable alternative to upright sitting’ in patients with lower-back pain.

In addition, Australian studies have found that when interspersed with periods of sitting upright, slouching can relax strained muscles in the core and legs.

London-based osteopath Gavin Smith explains: ‘There’s this cultural ideal, and even whole industries, that would argue slouching is not good for us and people now feel very guilty about sitting in certain ways. 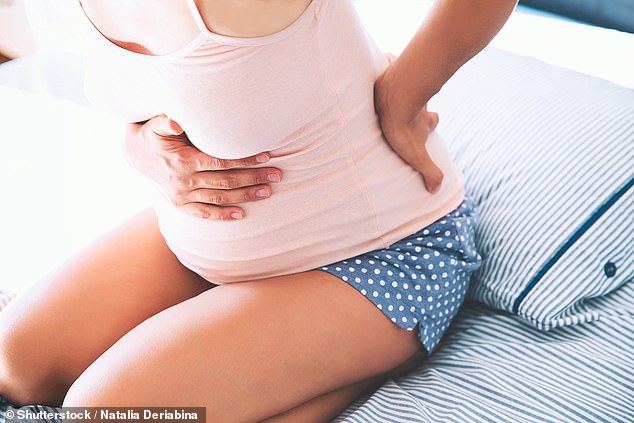 Health officials have long warned that slumping, whether at a computer or in front of the television, is a sure-fire route to crippling back and neck pain – or worse (stock image)

‘But while sitting straight activates muscles in the abdomen, pelvis and back, slump-sitting relaxes them.

‘Because these muscles are chronically over-active in people with lower-back pain, some periodic relaxation of them is helpful.

‘Alternating between comfortable and relaxed upright and slumped postures is probably the best way to sit at your desk.’

Trying too hard to sit as we are told to at work – feet flat on the floor, back straight and shoulders back with an S-shape curve to the spine – can backfire, causing tension in the middle back and breathing problems over time.

Jack Chew, a spokesman for the Chartered Society of Physiotherapy, who works in the NHS and private practice, says: ‘Slumping is not an enemy to posture and back health, just as sitting upright and standing aren’t a solution to back problems.’

THE SOLUTION TO BACK PAIN? HAVE A FIDGET!

According to some experts, providing you get up and walk around every now and then, slumping is harmless.

Gavin Smith explains: ‘Sitting or standing in any position for prolonged periods is unwise. Slumping in itself is no worse for us than sitting up straight, provided we don’t do it all the time.’

In studies published in the journal Spine, Australian researchers found a combination of slumping and sitting upright was far superior to sitting in one position for maintaining a stable spine and strong muscles.

Another study, published in the journal Ergonomics supports the benefits of switching positions throughout the day.

The researchers found that those only using ‘standing desks’ had significantly more leg and back pain. Adjustable desks that allow some sitting and some standing are better, but Smith says they are not a cure-all.

‘If you are relaxed at a standing desk for an hour, then that is fine,’ he says. ‘But you should try not be in any one position for longer than an hour or so.’

Prolonged sitting eventually causes the gluteal muscles in the buttocks to become lazy and the hamstrings in the backs of the thighs to shorten and tighten.

It increases the risk of back and shoulder pain as well as strains when you get up to move immediately after sitting.

This is why most physiotherapists now warn against long periods of continuous sitting – but not slumping.

What matters more than correct sitting posture is that you simply fidget, move around and change position regularly.

Chew says: ‘‘You need to think about challenging your positional capacity as much as you can throughout the day.

‘Go for a walk at lunchtime, sit on different seats and on the floor at home, move around as much as you can.’

Chew and other physiotherapists suggest sitting on a wooden chair or bench as it forces you to move around more than a padded, cushioned seat.