A team of researchers from UCLA and NASA’s Jet Propulsion Laboratory have detected the smallest quantities of dark matter ever, slow moving ‘clumps’ near quasars identified with new data from the Hubble Space Telescope.

The research represents a significant step forward in trying to understand what exactly dark matter is, capturing new data about how it behaves in quantities between 1/10,000th and 1/100,000th smaller than previously observed.

‘It’s incredible that after nearly 30 years of operation, Hubble is enabling cutting-edge views into fundamental physics and the nature of the universe that we didn’t even dream of when the telescope was launched.’ UCLA’s Tommaso Treu told the JPL.

Warping around the quasars created a kind of ‘magnifying glass’ effect, which researchers believe was caused by the presence of small clumps of dark matter

Dark matter is thought to be one of the fundamental particles in the universe and scientists have been eager to learn more about it in hopes it will lead to a better understanding of how the universe formed.

Yet, because of the particle’s unique properties—it doesn’t emit or reflect light—it’s impossible to directly observe.

Scientists have instead had to infer its presence by calculating the gravitational effects on light from large energy emitting bodies like stars or entire galaxies.

Previously, scientists had speculated that in smaller volumes, dark matter simply darted through the universe at speeds too fast to be observed, which they called ‘warm’ dark matter.

The team of researchers at UCLA had another idea, positing that there was slower moving ‘cold dark matter’ in the universe.

To test their idea, they decided to try something no one else had ever done before, collect measurements of light emitted from the particles surrounding eight different quasars. 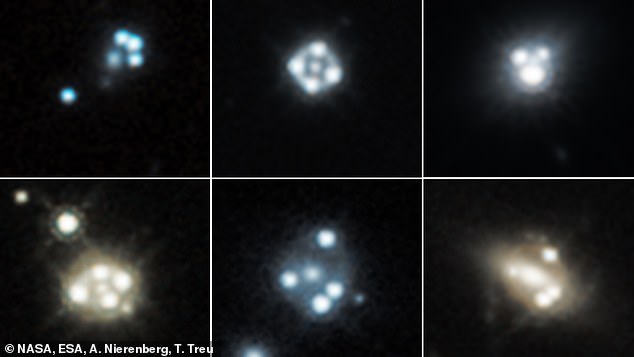 Researchers measured the light traveling from several difference quasars visible through the Hubble Space Telescope and detected substantial warping, which showed the presence of dark matter

Researchers compared the actual trajectories of the light to computer models for how the light should travel without any gravitation interference.

‘Imagine that each one of these eight galaxies is a giant magnifying glass,’ UCLA’s Daniel Gilman said.

‘Small dark matter clumps act as small cracks on the magnifying glass, altering the brightness and position of the four quasar images compared to what you would expect to see if the glass were smooth.’

‘Astronomers have carried out other observational tests of dark matter theories before, but ours provides the strongest evidence yet for the presence of small clumps of cold dark matter,’ Anna Nierenberg, of NASA’s Jet Propulsion Laboratory, said.

‘By combining the latest theoretical predictions, statistical tools and new Hubble observations, we now have a much more robust result than was previously possible.’

Astronomers know it to be out there because of its gravitational effects on known matter.

Dark matter is a hypothetical substance said to make up roughly 27 per cent of the universe. It is thought to be the gravitational ‘glue’ that holds the galaxies together (artist’s impression)

The material is thought to be the gravitational ‘glue’ that holds the galaxies together.

Calculations show that many galaxies would be torn apart instead of rotating if they weren’t held together by a large amount of dark matter.

Just five per cent the observable universe consists of known matter such as atoms and subatomic particles.