A teenage flight student in training assisted a pilot in making an emergency landing Saturday in Utah.

Authorities said a small plane clipped a car from behind while making the landing on Interstate 15 in Riverdale. No injuries were reported.

A flight instructor who was training the 19-year-old student, both unnamed, took control and landed the plane when it started having mechanical problems, Utah Highway Patrol spokesman Andrew Battenfield said in a statement.

The single-engine plane flew under an overpass before landing near Ogden. The pilot and student had been doing practice landings prior.

Emergency workers stand next to a plane which had to make an emergency landing on Interstate 15 in Riverdale, Utah on Saturday May, 26, 2018 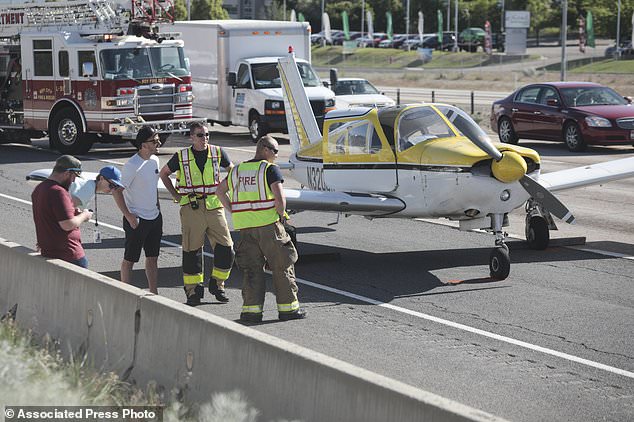 Emergency workers stand next to a plane which had to make an emergency landing on Interstate 15 in Riverdale, Utah on Saturday May, 26, 2018

‘They were doing touch-and-goes at the Ogden airport when the plane started having mechanical malfunctions,’ Battenfield said.

A couple and their two children were in the car, headed from Idaho Falls, Idaho, to Farmington, Utah, to attend a soccer tournament.

The driver, Mayra Ramirez, said her children, ages 9 and 5, were sleeping when the plane hit their car from behind.

The impact shattered two of the car’s windows and caused minor damage to the top of the car.

‘I heard this really loud noise. I thought it was a motorcycle but when I looked in the rearview mirror, it was a plane,’ she said. ‘It was both a little scary and surreal.’

A photo published by the Standard-Examiner showed the plane parked on the right side of Interstate 15 as authorities prepared to remove it with a truck while southbound traffic was restricted to one lane.

The plane did not appear to be significantly damaged. 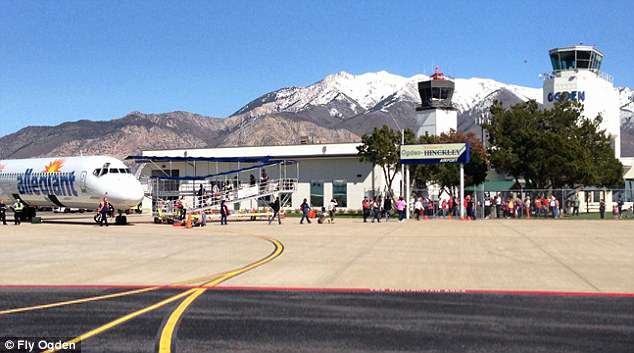