Mobile phones could be used to detect potentially deadly norovirus.

Made infamous by outbreaks on cruise ships, just 10 particles of the highly infectious microbe can trigger the vomiting bug in humans.

Norovirus can also strike closer to home, with water and food-borne outbreaks occurring in water systems, schools and restaurants.

Now researchers have created a simple, portable and inexpensive way of detecting extremely low levels of norovirus in water.

Mobile phones could be used to detect potentially deadly norovirus. Made infamous by outbreaks on cruise ships, just 10 particles of the highly infectious microbe can trigger the vomiting bug in humans. Pictured: How the device works

WHAT IS NOROVIRUS AND HOW LONG WILL IT TAKE TO CLEAR UP?

Norovirus is one of the most common stomach infections in the UK and it is referred to winter vomiting bug as it usually occurs in winter.

Usually it clears up by itself within 24 to 48 hours but it can very serious for already frail patients, and can lead to dehydration.

The virus, which can also cause diarrhoea, is extremely contagious and can create huge disruption in hospitals as it spreads so quickly between patients.

But the winter vomiting bug has a tendency to mutate and some strains are worse than others, leading to higher numbers of infections.

Study leader Professor Kelly Reynolds, of the University of Arizona in the US, said: ‘Advances in rapid monitoring of human viruses in water are essential for protecting public health.

‘This rapid, low-cost water quality monitoring technology could be a transformational tool for reducing both local and global disease burdens.’

Professor Reynolds said that devices to detect norovirus in small quantities do already exist, but they usually require a lab setting with an array of microscopes, lasers and spectrometers that can cost thousands of pounds.

To detect norovirus in the field, such as on cruise ships or in water wells, the team decided to use much simpler materials – paper, in the form of microfluidic chips, and a smartphone.

Soo Chung, a biosystems engineering doctoral student who worked on the project, said: ‘Paper substrate is very cheap and easy to store, and we can fabricate these chips easily.

‘The fibrous structure of paper also allows liquid to flow spontaneously without using the pumping systems other chips, such as silicon chips, usually require.’

The team developed a new way to detect norovirus, by counting fluorescent beads rather than measuring light intensity.

The process starts with adding potentially contaminated water to one end of a paper microfluidic chip.

To the other end, a tester adds tiny, fluorescent polystyrene beads. Each bead is attached to an antibody against norovirus.

If norovirus is present, several of the antibodies attach to each virus particle, creating a little clump of fluorescent beads.

Dr Jeong-Yeol Yoon, a researcher in Arisona’s Department of Biomedical Engineering, said: ‘Norovirus particles are too small to be imaged by a smartphone microscope, and so are antibodies.

‘But when you have two or three or more of these beads joined together, that indicates that the norovirus is there, causing the beads to aggregate.’

The clumps of beads are large enough for a smartphone microscope to detect and photograph.

Then, a smartphone app the researchers created counts the number of illuminated pixels in the image to identify the number of aggregated beads, and subsequently, the number of norovirus particles in the sample. 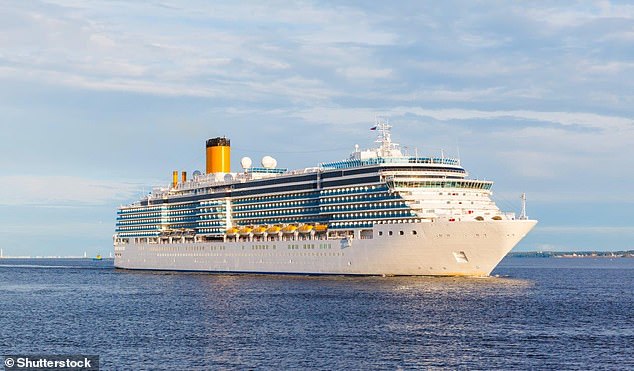 As well as cruise ships, Norovirus can also strike closer to home, with water and food-borne outbreaks occurring in water systems, schools and restaurants

The researchers said that the most expensive component of the whole device – the smartphone microscope – costs less than £40 ($50), and is also simple to use.

Dr Yoon said: ‘You don’t have to be a scientist or an engineer to run the device.

‘Analysis will be done automatically by the smartphone app, so all you have to worry about is loading a sample of water onto the chip.’

Now the team hopes to develop methods for detecting norovirus infections in patients even earlier, and to expand their smartphone monitoring platform to detect other hazards, such as potentially cancer-causing chemicals.

Dr Yoon added: ‘It only takes a very small number of norovirus particles to cause an infection in humans, so we need a really sensitive detection method.

‘The lowest detection limit corresponded to about five or six norovirus particles per sample, so it’s very close to the single-virus level.

‘When norovirus reaches levels detectable by other methods, the person is already seriously ill.

‘But if we can detect the virus earlier, they can receive medical care sooner.’

Dr Yoon said early detection might also help curb the spread of disease in isolated, crowded situations such as cruise ships, where distinguishing between a run-of-the-mill upset stomach and a norovirus infection could guide quarantine efforts or expedite getting a passenger to port for treatment.

Dr Yoon is also due to present the research at the American Chemical Society’s national meeting in San Diego, California.