A photo of a person’s inner eyelid taken with a standard smartphone camera can be used to screen for anaemia, a new study claims.

Researchers in Rhode Island developed an artificial intelligence (AI) powered model to analyse photos of the inside of people’s lower eyelids, known as the palpebral conjunctiva, which appears paler with anemia.

The technology could power an app that determines if someone has anaemia through smartphone photos, instead of blood tests, the experts claim.

Anaemia, commonly caused by a shortage of iron in your body, is a deficiency in the number or quality of red blood cells in your body.

Red blood cells contain hemoglobin, which carries oxygen – and without enough hemoglobin and oxygen, the skin can turn a pale colour.

A photo of a person’s inner eyelid taken with a standard smartphone camera can be used to screen for anaemia, researchers in Rhode Island report. Pictured is a photo of an palpebral conjunctiva used in the study

The condition affects an estimated 5.6 per cent of Americans and more than 25 per cent of the global population.

This new study, led by Dr Selim Suner of Brown University and Rhode Island Hospital in the US, could provide a more accessible method of diagnosis.

‘Anaemia, defined as a low hemoglobin concentration, has a large impact on the health of the world’s population,’ Dr Suner and colleagues say in their paper. 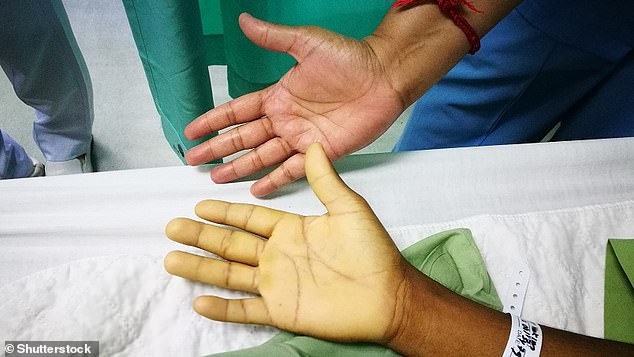 ‘We describe the use of a ubiquitous device, the smartphone, to predict hemoglobin concentration and screen for anaemia.’

The experts say having anaemia is a significant risk factor for mortality, especially in vulnerable populations such as children, the elderly and the chronically ill.

However, there is an ‘unmet need’ for inexpensive, accessible and non-invasive point-of-care tools to screen for and diagnose the condition.

Previous studies have shown that the palpebral conjunctiva appears paler with anaemia and is a more accurate indicator of the condition than a person’s palms or nail beds. 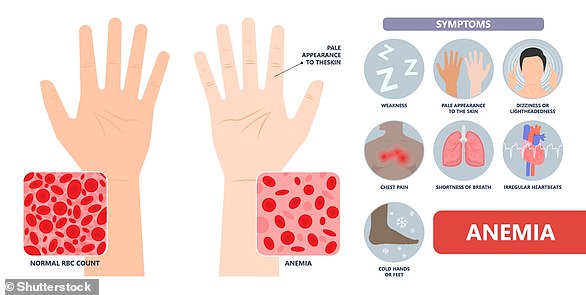 Symptoms of anaemia include shortness of breath, cold hands or feet, chest pain and pale skin

Anaemia is a deficiency in the number or quality of red blood cells in your body.

The most common cause of anaemia is iron deficiency.

Iron is a vital component of haemoglobin, a molecule in red blood cells that carries oxygen around the body, providing fuel for energy metabolism.

Red blood cells are produced in the bone marrow. The bone marrow needs enough dietary iron and some vitamins to make haemoglobin.

If you don’t have enough iron in your diet, your body will draw on the small reserves of iron stored in your liver. Once this reservoir is depleted, the red blood cells will not be able to carry oxygen around the body effectively.

When a person has anaemia, their heart has to work harder to pump the quantity of blood needed to get enough oxygen around their body.

During heavy exercise, the cells may not be able to carry enough oxygen to meet the body’s needs and the person can become exhausted and feel unwell.

Symptoms of anaemia include shortness of breath, cold hands or feet, chest pain and pale skin.

The inside of a person’s lower eyelid – called the palpebral conjunctiva – also appears paler with anemia.

Anaemia isn’t a disease in itself, but a result of a malfunction somewhere in the body.

This blood condition is common, particularly in females. Some estimates suggest that around one in five menstruating women and half of all pregnant women are anaemic.

With this knowledge in hand, researchers obtained smartphone images of the palpebral conjunctiva from 142 patients with a wide range of hemoglobin levels.

They zoomed into a small region of the conjunctiva in each photo and developed a new algorithm to boost color resolution – the ability of each pixel to represent a wide variety of colour tones.

They then developed a prediction model linking conjunctiva color, compared to the surrounding skin and whites of the eyes, to hemoglobin levels.

Then, the researchers tested the new algorithms on photos collected from another 202 new anaemia patients. 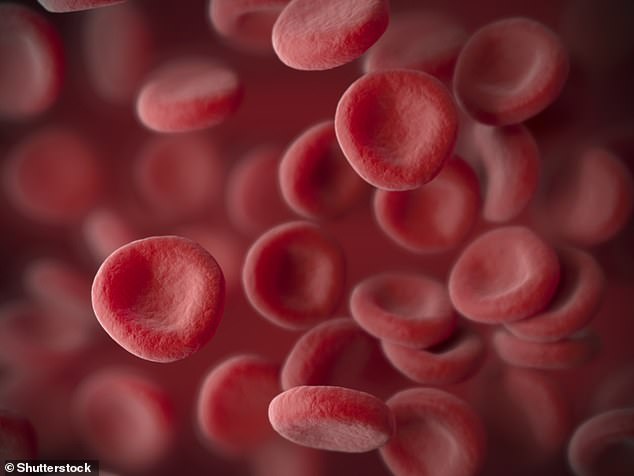 When analysing the new set of photographs, the model was 72 per cent accurate at detecting anaemia, the team found.

‘Transfusion threshold refers to the level of anaemia which requires a blood tranfusion,’ Dr Suner said.

‘Typically this is at a level of hemoglobin at 7.0g/dL [grams per decilitre].’

Skin tone did not change results, although image quality had some effect.

The results suggest that a smartphone app could be used to screen for anaemia in a telehealth or remote setting where blood tests aren’t available.

‘Images of the lower eyelid’s vascular surface obtained by a smartphone camera can be utilized to estimate blood hemoglobin concentration and predict anaemia which is a serious health condition afflicting billions of people world-wide with a disproportionate effect in developing countries,’ the authors say.

‘Utilisation of non-invasive techniques to detect anaemia opens the door to widespread screening, early diagnosis and treatment, particularly in low resource settings where access to healthcare is sparce.’

The study has been published in the open-access journal PLOS One.

A blood test could spot people most at risk of falling seriously ill or dying from Covid-19 by scanning the size of their red blood cells, a study claims.

It is currently used to help diagnose various medical conditions such as anaemia, heart disease, blood disorder and diabetes.

A low reading means a person’s red blood cells are all about the same size, while a high score indicates the cells are of varying sizes.

A high RDW normally indicates poor nutrition but US researchers also found it was correlated with Covid-19 death rate.

Shocking data from the peer-reviewed study reveals a person with red blood cells that vary significantly in size is 2.7 times more likely to die from Covid-19.

Regularly monitoring the red blood cells could help determine whether they are responding to treatment or getting worse, the researchers add.