Smokers who vape are half as likely to ditch tobacco as those who never use e-cigarettes, new research suggests.

Even those who just occasionally vape are 67 percent less likely to ditch smoking for good, a study found.

Study author Dr Stanton Glantz, from the University of California, San Francisco, said: ‘This is important because e-cigarettes are widely promoted as a smoking cessation tool.

‘And, while there is no question that some smokers do successfully quit with e-cigarettes, they keep many more people smoking.’

Although often touted as a healthier alternative to tobacco, previous research suggests e-cigarettes may be linked to heart attacks and stroke, as well as being a gateway into nicotine use.

WHAT PARENTS NEED TO KNOW ABOUT E-CIGARETTES

E-cigarettes use a mixture of flavored liquids and nicotine to create a vapor.

This vapor is then inhaled by the user similarly to how one would smoke a regular cigarette.

Are these devices safe?

Since these devices don’t use traditional smoke, people are under the assumption that they are safe for you.

But the liquid in the e-cigarettes can contain harmful toxins and carcinogens including anti-freeze.

The nicotine in the e-cigarettes also had addictive components and can lead to other tobacco use. This can hinder brain development in teens.

Also, the devices can overheat and explode if defective.

The Food and Drug Administration does not certify e-cigarettes as a product to get over smoking regular cigarettes.

E-cigarettes may not help smokers quit

Results further suggest smokers get through an average of 16 cigarettes when they also vape compared to 14 when they do not also do the supposedly healthier option.

Dr Samir Soneji from Dartmouth College in Hanover, New Hampshire, who was not involved in the study, said: ‘The findings are concerning because they suggest the idea that e-cigarettes are an even more effective cessation tool than nicotine replacement therapy – an idea aggressively marketed by e-cigarette and tobacco companies – may not be true in practice.

‘Most of the scientific evidence to date, including this study, finds that e-cigarette use does not lead to higher rates of smoking cessation compared to standard cessation tools.

Yet, Dr Thomas Wills from the University of Hawaii, Honolulu, argued: ‘Whether they are safer than cigarettes is almost a trick question because tobacco cigarettes are one of the most harmful substances known to medicine.

‘It would be hard to find anything more harmful to long-term health except maybe arsenic.

‘But this does not mean that e-cigarettes are safe.’

The researchers analysed the results of a 2014 survey that assessed smokers and ex-smokers in the EU.

A criticism of the study is it did not ask participants if they were planning to quit or cut down on their tobacco use, or if ex-smokers ditched the habit before e-cigarettes were widely available.

The findings were published in the American Journal of Preventive Medicine. 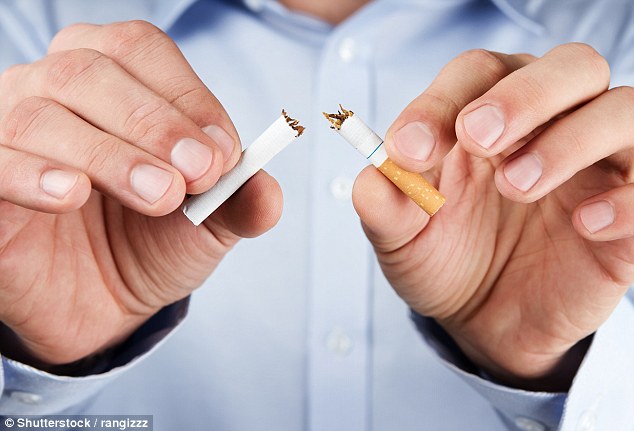 Vaping may cause heart attacks and lead to tobacco use

This comes after research released last August suggested just one puff of an e-cigarette could be all it takes to increase the risk of a heart attack.

After just five minutes of vape exposure, mice’s arteries narrow by 30 percent within an hour, a study by West Virginia University found.

The animals’ blood vessels are also less able to dilate, which is required to lower blood pressure, the research adds.

The researchers wrote: ‘These data indicate that e-cigs should not be considered safe and that they induce significant deleterious effects.’

Further research from the same month implied e-cigarettes are a gateway to smoking for teenagers.

Of those who have never tried cigarettes but do vape, 34.4 percent smoke a year later, a study by the University of Leeds found.

This is compared to only nine percent who did not previously use e-cigs, the research adds.

The study also found occasional smokers are nearly twice as likely to increase their habit if they vape.

The researchers believe e-cigarettes may normalise nicotine use.