Snake catchers are used to arriving on the scene to handle some of the nation’s most venomous snakes and wildlife.

And when one Adelaide resident called asking for an alligator to be removed from their backyard, Snake Catchers Adelaide were on hand to help out.

But it was hard to tell who was more confused – the homeowner or the snake catcher when the ferocious ‘alligator’ turned out to be a harmless blue tongue lizard.

‘I have an alligator in my backyard,’ the snake catcher recalled the client explaining.

But after arriving at the property, the experienced snake handler was left in a state of confusion.

‘No I think you’ll find it’s a lizard,’ the snake catcher recalled telling the client.

‘No no no it’s an alligator and I’m very afraid for my family,’ the man replied.

The hilarious exchange was shared over Facebook, with the snake catcher sharing more details from the confusing exchange.

‘He wouldn’t go near it he thought it was going to kill him,’ he wrote.

‘He was too scared to go near it because every time he went near it it opened its mouth and hissed at him.’

Others joined in on the conversation, sharing their opinions and bewilderment over the situation.

‘You can’t be serious. We don’t even have alligators in this country,’ one person said.

‘Is that the rare pygmy gutter gator?’ another asked.

‘I think it should be mandatory that all people in Australia have to study the wildlife or get a book on them, if not for their own peace of mind, but for the animals sake,’ one person suggested.

‘I gave them some info and said it would be a good idea to learn about our wildlife,’ the snake catcher replied.

‘Did you warn them about drop bears too?!’ someone joked. 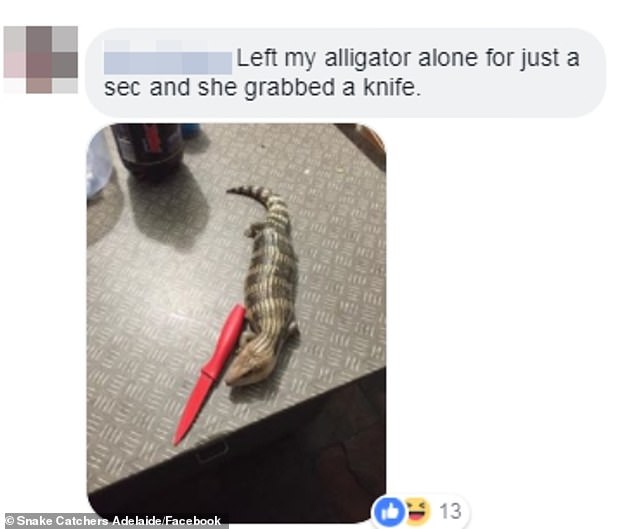