A breathtaking chase between a determined snake and a small bird on a power line in Sabah, Malaysia, was caught on camera.

The hungry snake slithered its way on a very high power line, climbing through and balancing on different layers of wires to catch its prey.

The yellow-breasted bird gave the lime-green reptile a run for its money, as it stood still, long enough for the snake to get close but not catastrophically close.

Two birds, both yellow at the bottom with a dark head and beak, could be seen teasing the snake on the wire while it almost camouflaged into the lines.

At first the snake nearly blends in with the wires, keeping its head low and its body flat, sizing itself for the meal.

But a second larger bird warns the little one to make flight, which the smaller one eventually does.

The unsuspecting yellow-chested bird doesn’t move for a while, till the green snake is almost near it and about to attack 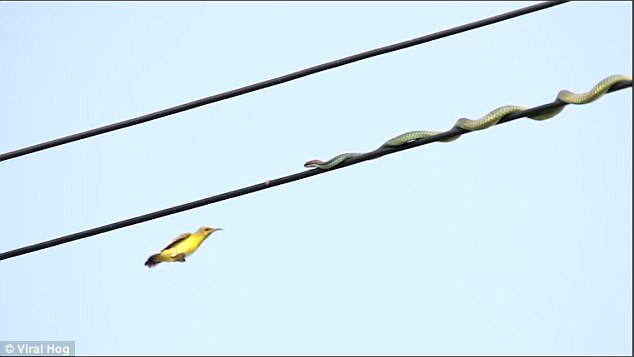 The fearless bird faces its predator before moving right on top of the snake and, in a twist, attacks the snake by poking its skin

The video was posted by a Viral Hog user from Kota Kinabalu, Sabah, who witnessed the exciting chase.

‘I was at my home backyard and heard the birds chirping and looking up to see this snake balancing along the electrical cable trying to catch the birds.

‘The birds seem to play catch-me-if-you can and the snake did a good job balancing moving along the cable, trying for the birds but fail and return to the palm tree, hungry.’ 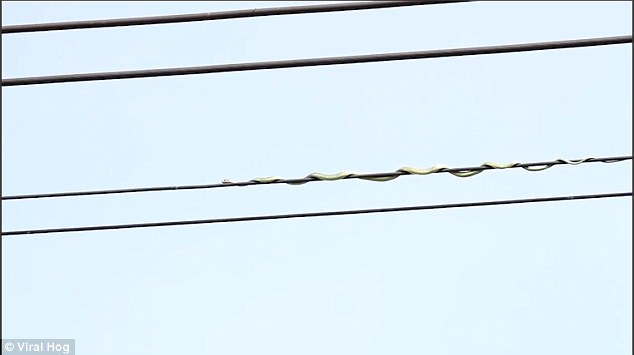 The snake almost goes undetected as it tightens its grip with the wire lines, staying close but connected in a way that doesn’t allow itself to fall off 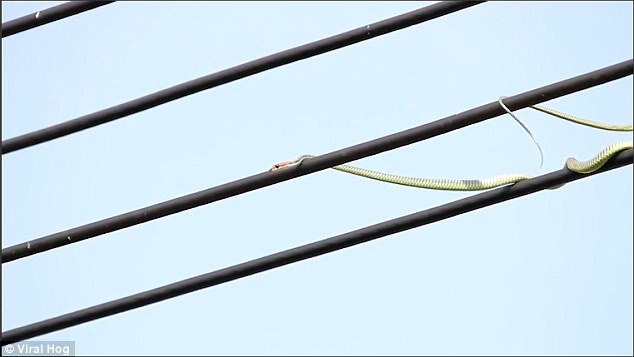 The brown-headed snake showed off its skills as it moved effortlessly, balancing itself on the different level 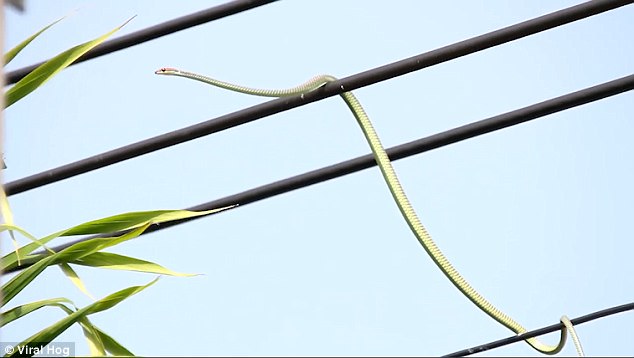 Despite its efforts, it was unable to catch the birds and attempted to slime off to a nearby tree but also fails to do that

Towards the end of the almost three-minute clip, the snake seems to panic as it quickly moves from wire-to-wire in a last ditch attempt to feed itself.

Although unsuccessful, the bold snake displays its tenacity as it wraps its green skin on the line in six different twists.

It attempts to get off the wires by sliding onto a nearby tree but fails to get a grip, before moving off on the laminated lines.