The latest Saturday Night Live episode began with Aidy Bryant bringing in the holiday cheer dressed as Frosty the Snowman as she invites into the home of three very different American families gathered around the dinner table.

‘I’m so happy everyone flew into the holidays, and I’m even more happy they did it. They’re impeaching Trump!’

As the California family exaggeratedly rails against Trump for ‘violating the constitution,’ audiences are taken to a pro-Trump family in South Carolina who wonder what crime Trump committed in the first place.

‘Well I guess the crime of being an alpha male who actually gets things done,’ they decide. 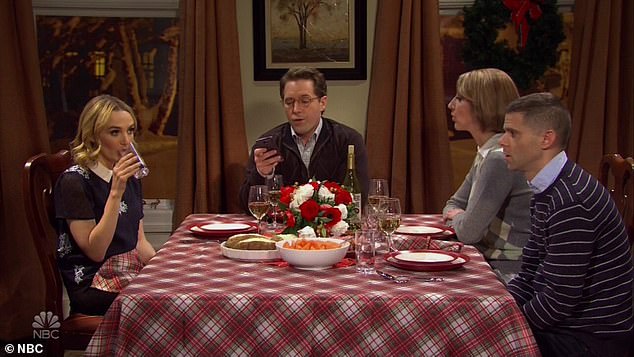 Then, SNL travels to an African American family in Atlanta, Georgia, with comedic veteran, Kenan Thompson, playing the father.

They’re much more interested in the upcoming Bad Boys 3 movie before begrudgingly turn the impeachment inquiry.

‘You mean how Trump definitely is getting impeached and then getting re-elected? I’m good,’ Thompson says.

As the Californians and the South Carolinians wonder who would vote for Trump, the Georgia family have much more pressing questions.

‘Who do you think is getting voted off the Masked Singer next week? I think it’s the fox.’

Despite the three families differing opinions, Bryant’s Frosty the Snowman assures everyone that it doesn’t matter because they live in state’s that where ‘their votes don’t matter.’ 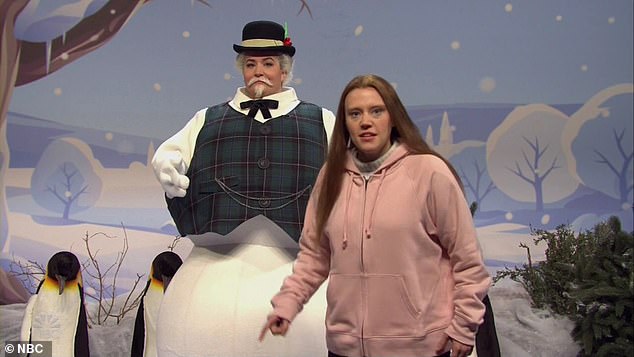 ‘In 10 years, this snowman won’t exist! Her home will be a puddle,’ she says.

Before signing off, McKinnon’s Thunberg sends Trump a special message.

‘Donald Trump, step to me and I’ll come at you like a plastic straw comes to a turtles.’