Saturday Night Live poked fun at Democratic candidates as it returned to screens for a 45th season this weekend, highlighting Bernie Sanders age and Joe Biden reputation for being ‘out of touch’.

Larry Davis appeared once again in character as 78-year-old Sanders on the NBC show, telling the audience at a town hall how he was ‘so excited to be back and ruin things for a second time’.

The funny act also featured appearances from Maya Rudolph as Kamala Harris, Kate McKinnon as Elizabeth Warren and Woody Harrelson as Biden, while Texas Democrat Marianne Williamson appeared via astral projection to add to her reputation of being kooky. 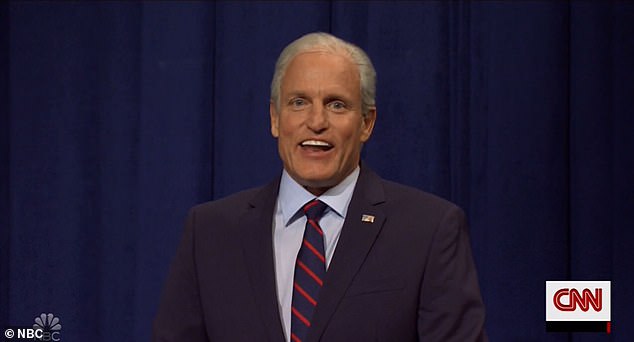 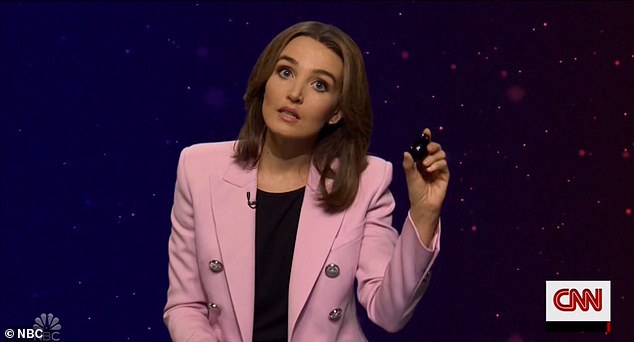 Marianne Williamson, played by Chloe Fineman, appeared via astral projection to add to her reputation of being kooky

Hammering it home that Sanders is the oldest contender to represent the the Democrats in the race for the 2020 White House, at one point he snapped back: ‘ Don’t talk to me about patience. it takes me 40 minutes to figure out how to turn on the TV.’

Davis, who donned a white wig and suit for the appearance, went on: ‘Sometimes I sit on the porch and do literally nothing for six hours. I don’t talk to people, I don’t look at stuff, I sit so still people get scared and call 911.’

This week’s host Woody Harrelson portrayed the former Vice President – who has been criticized for being tactile – and introduced his character saying: ‘Hello everyone, Daddy’s back. I see you, I hear you, I sniff you and I hug you from behind.’ 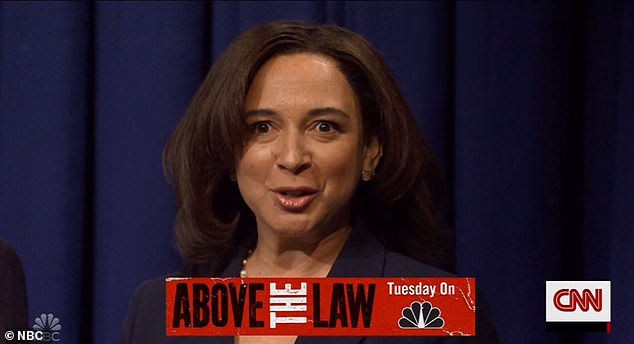 The funny act also featured an appearance from Maya Rudolph as Kamala Harris, who mentioned Biden’s stance on segregation in a Democrat debate during the show’s summer hiatus 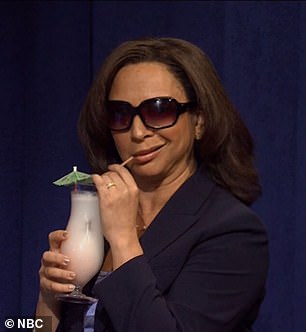 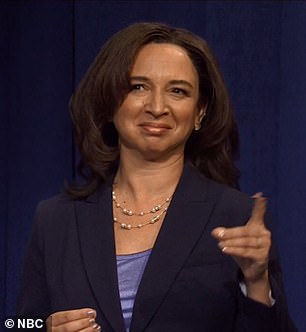 Rudolph as Harris called herself the ‘cool aunt’. ‘A fun aunt who will give you weed and then arrest you for having weed’

The actor donned a pair of comically large teeth for the sketch and continued: ‘And as I ask every time I walk into a room, where am I and what is going on?’

Biden’s role as VP to former President Barack Obama was a prominent element of the sketch with his every seemingly ending up with a mention of the 44th President’s name.

His background regarding segregation – which was pointed out by Kamala Harris in a Democratic debate during SNL’s summer hiatus – was also wrapped into the humorous script.

At one point Biden asked: ‘Do I have time for very long story? The year is 1962, I’m life-guarding, no shirt, tan chest, medium nips, I should point out it was a segregated pool, just to put everyone in edge for rest of story… 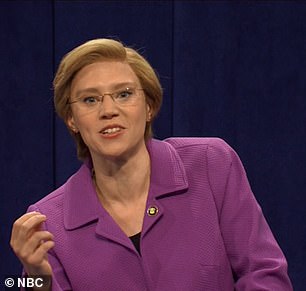 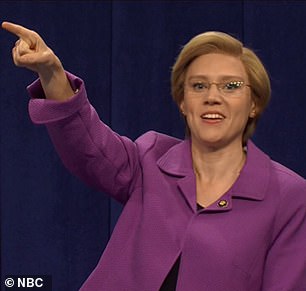 In another instance highlighting his connection to Obama – despite no endorsement from the man himself so far during the race for the White House – Biden says: ‘I’m like plastic straws, I’ve been around forever, I’ve always worked, but now you’re mad at me? Drink up America.

‘And I’d like to say one more time, Barack.’

At one point Davis’s Sanders character even poked fun at Biden’s inability to connect with today’s voters, saying: ‘Remember when everyone thought I would be the one to seem out of touch, this guy makes me look like Drake.’

Harris, played by Rudolph, took on the self-labelled title of ‘America’s cool aunt’. ‘A fun aunt who will give you weed and then arrest you for having weed,’ she added as she blended her title into a millennial-friendly ‘Funt’. 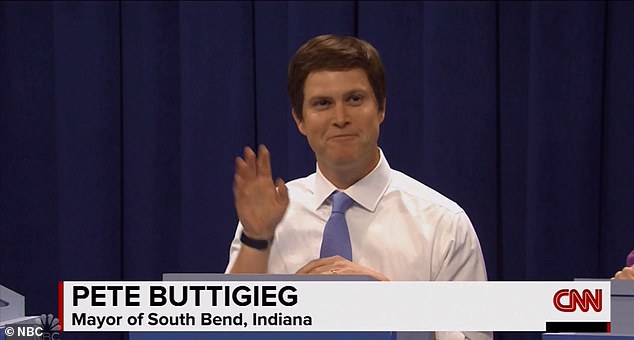 Mayor of South Bend, Indiana, Pete Buttigieg made an appearance 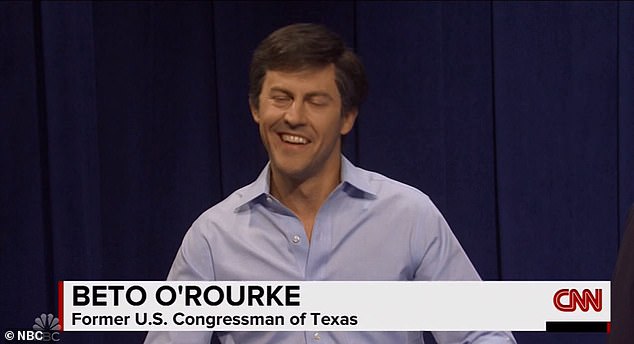 But when asking herself if she could win the presidency she admitted, ‘probably not’. Adding: ‘Can I successfully seduce a much younger man, you better funt-ing believe it.’

When asked by an audience member whether she would still directly prosecute President Trump instead of impeachment, the program made fun of Harris being a ‘successful lady lawyer’ who in the sketch compared herself to TV homicide detective and medical examiner duo Rizzoli & Isles.

‘I’m a walking TNT show,’ she added. ‘Don’t you want four more years of me dressing down our enemies like this? “You call that human rights? I call it human wrongs”.’

Harris has changed her stance on marijuana laws several times during her tenure as California Attorney General and during her time in the Senate.

Kate McKinnon was Elizabeth Warren in the sketch – much to the delight of cheering live audience members.