Snooker fans have branded the epic hug – which lasted over a minute – between Ronnie O’Sullivan and Judd Trump following last night’s World Championship final as ‘weird’ and ‘awkward for the audience’.

A sobbing O’Sullivan, 46, who held off a Trump comeback to win a record-equalling seventh title, fell into the arms of his rival after potting the final ball to win – and then almost refused to leave.

BBC presenter Hazel Irvine eventually rallied O’Sullivan to unlock the lingering embrace and get on with his match-winning duties – including hugging his children Lily and Ronnie Jr. and collecting a cheque for £500,000.

As the pair exchanged words for a whopping 64 seconds, The initially ethusiastic  Crucible crowd started to look a little awkward at the prolonged moment.

And fans watching at home admitted on social media that they found the clinch ’embarrassing’, with one suggesting Trump looked like he ‘couldn’t escape’ the ‘struggle-hug’.

An emotional Ronnie O’Sullivan locked Judd Trump  into a lengthy embrace after beating him 18-13 last night to win his seventh World Championship – but the hug, which lasted more than a minute, left many feeling ‘awkward’, with some suggesting it was ‘a bit weird’ 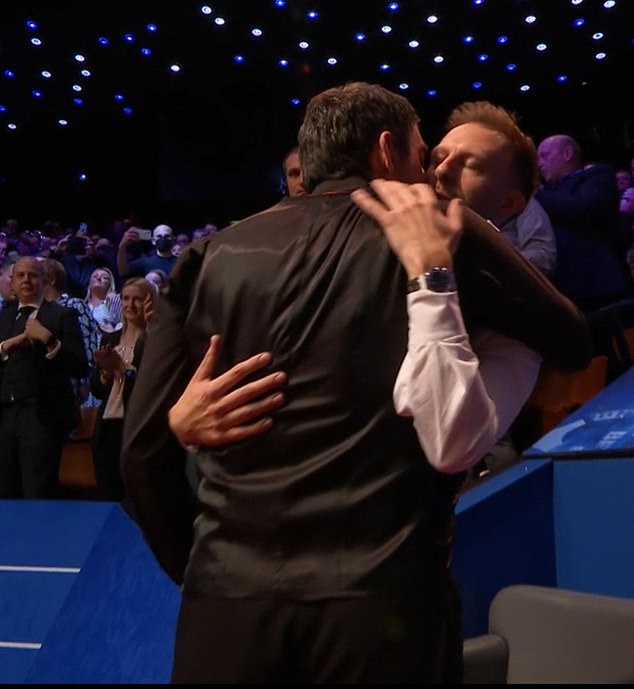 One armchair snooker fan wrote: ‘Biggest Ronnie fan but thought the prolonged hug was embarrassing and a bit cringe’ – another said Judd looked keen to escape his rival’s embrace 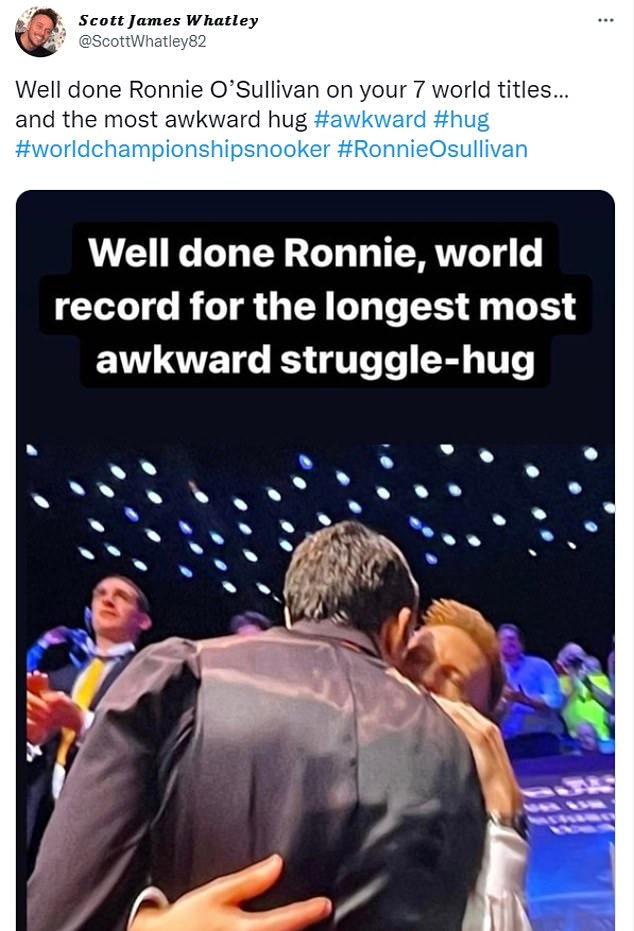 @BakrMurad4 took to Twitter, saying: ‘Biggest Ronnie fan but thought the prolonged hug was embarrassing and a bit cringe tbh but he must’ve been feeling emotional. Ronnie seemed in awe of Judd, it was weird and cringe. Judd definitely wanted the hug to end sharpish but Ronnie was clinging on.’

@MightyGooner81 asked: ‘Anyone else start to feel awkward after Ronnie and Judd’s hug went beyond about the 20 second mark?’

@mralistairgreen added: ‘That hug Ronnie gave just long enough to be a bit weird and awkward for everyone including the audience. 10/10. Perfect.’ 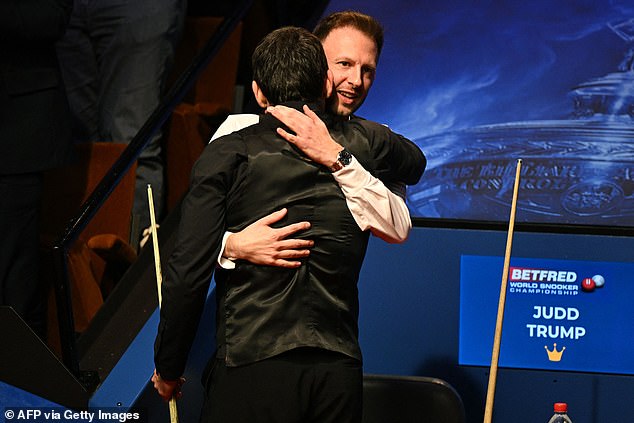 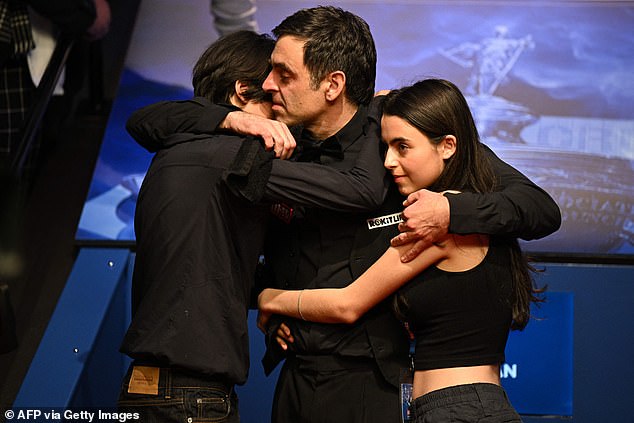 Well done Dad! After embracing Trump, he then hugged his children Lily and Ronnie Jr.

And @colin_a_mcbride penned: ‘There is no doubt that Ronnie is the greatest there has ever been, but he is a very weird cat. That hug was more awkward than the silence when I make a very silly, niche sport reference.’

@LouisePagePR said: ‘A hug so long even I, a hugger, felt awkward. No mean feat. Well done Ronnie. Hugpocalypse Now.’

The 46-year-old, who is now the oldest champion in Crucible history, has dominated and transcended the sport for over two decades. 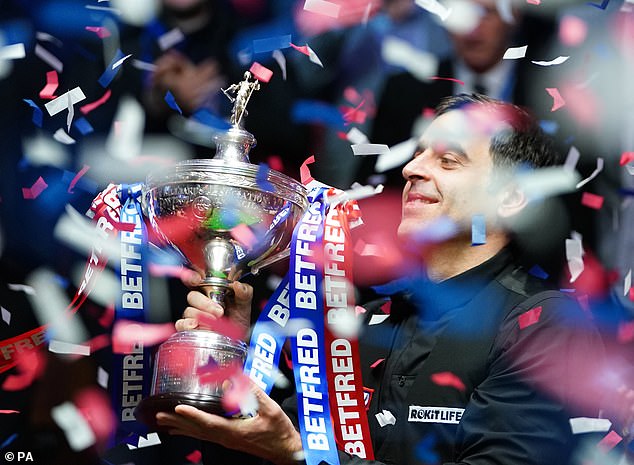 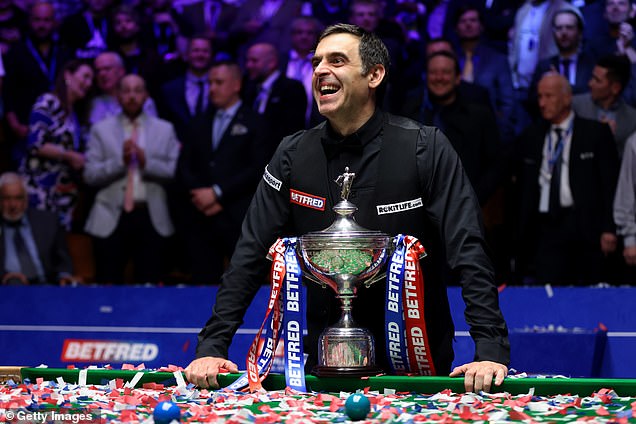 O’Sullivan, who is arguably the greatest snooker player of all time, pulled level with Stephen Hendry’s Crucible crowns and is the oldest person to ever win a World Championship at 46 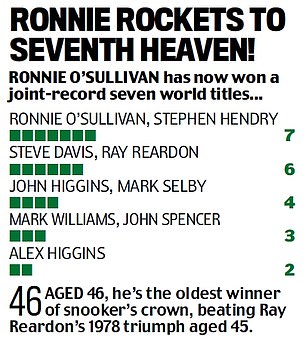 After embracing Trump, he then hugged his teenage children Lily and Ronnie Jr. Also present was his father, 67, who is also called Ronnie.

O’Sullivan Sr was jailed for murder when his son was aged just 16 after he stabbed a man to death in a Chelsea nightclub.

Snooker’s new champion O’Sullivan paid tribute to his opponent following the match – and the embrace, saying: ‘As far as I’m concerned this fella is already an all-time great.

‘That’s probably the greatest result I’ve ever had against someone like Judd.’

The champion added: ‘I didn’t really feel like the favourite to win,’

‘I doubted myself a little bit, so to finally get a result like I did is special. 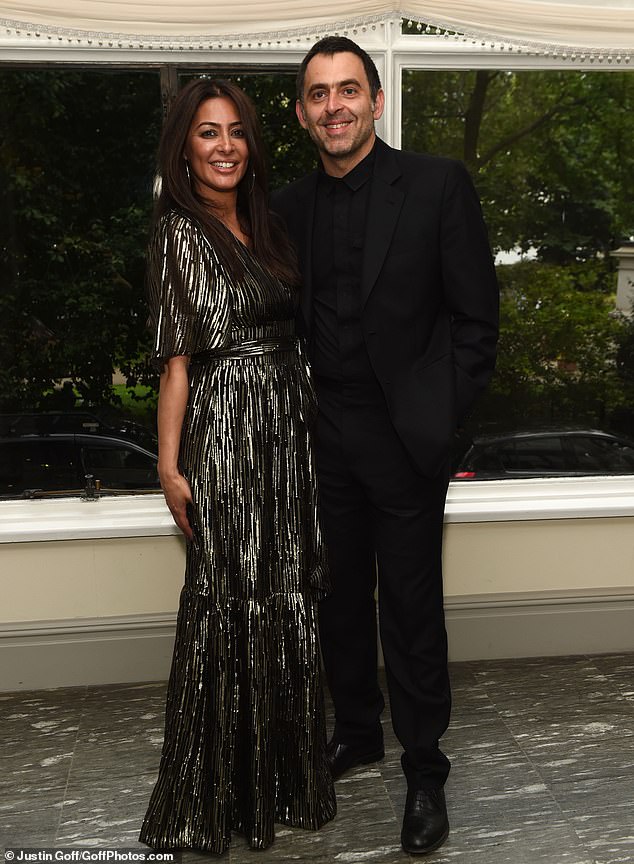 ‘I’ve grown up with Judd, we’ve shared a lot of time on the practice tables so to hear the words he said to me afterwards, I didn’t realise what that meant to him.

‘It was nice to hear I was part of his development and it was a special moment – he choked me up.’

O’Sullivan had son Ronnie Jr and daughter Lily with Jo Langley, whom he met at Narcotics Anonymous.

He also has an elder daughter, Taylor-Anne, 25, from a two-year relationship with Sally Magnus. He became a grandfather in 2016 when Taylor-Anne welcomed a granddaughter.

The pair were reported to have split after ten years together but Footballers Wives actress Rouass was pictured wearing her engagement ring last month.