Snooki and JWoww slip into skimpy bikinis for Jersey Shore

They are re-living their 20s as they film Jersey Shore Family Vacation in Florida.

And more than five years after their original MTV show went off the air Jennifer ‘JWoww’ Farley, 31 and Nicole ‘Snooki’ Polizzi, 30 proved they’re looking better than ever as they showed off their bikini bodies on Thursday.

The Italian-American stars were joined by the rest of the Jersey Shore clan aboard a yacht in Miami for drinking, tanning and some water sports.

Bikini babe: Nicole ‘Snooki’ Polizzi is pictured on a yacht filming scenes with her Jersey Shore Family Vacation co-stars on Thursday in Miami 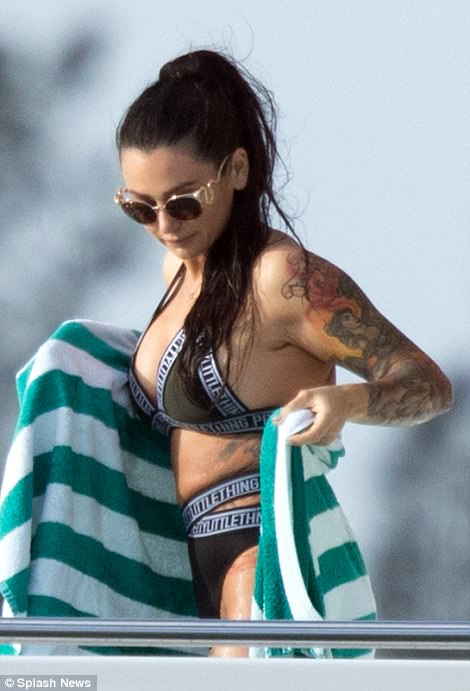 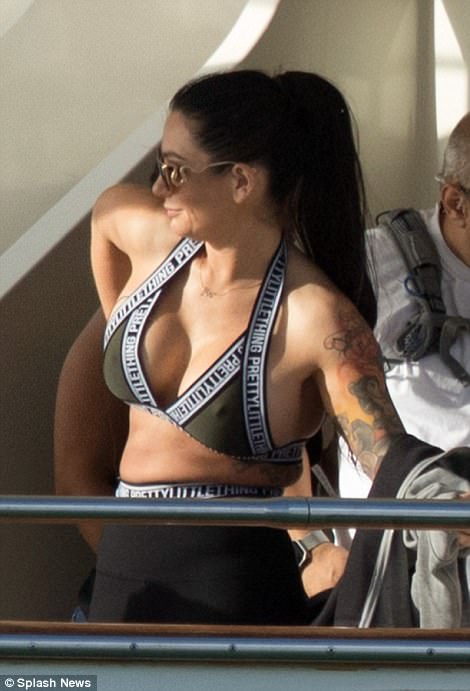 Despite the chilly weather JWoww and Snooki put on a busty display in stylish black swimsuits.

Snooki clutched a glass of wine as she enjoyed the luxury yacht wearing a black two-piece and orange cover-up.

She accessorized with massive cat-eye sunglasses and pulled half her blonde tinted locks up into a high ponytail.

Snooki married Jionni LaValle in 2014, having given birth to their two children – Lorenzo, five, and Giovanna, three – during their engagement. 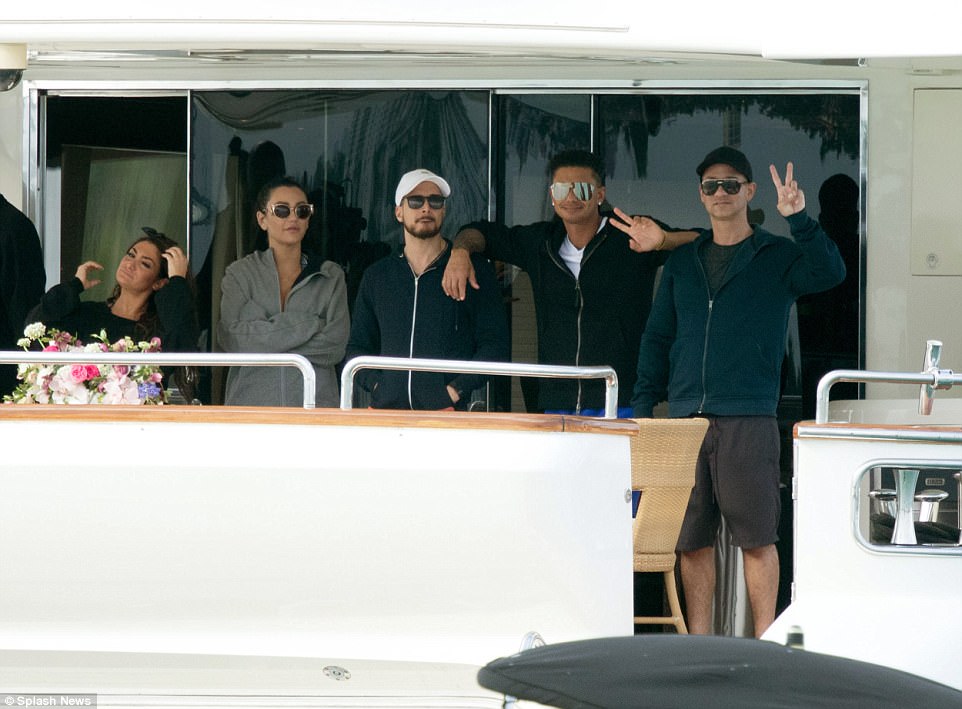 The gang is back! JWoww is pictured alongside Deena Cortese, Vinny Guadagnino, Paul ‘Pauly D’ Delvecchio and Mike ‘The Situation’ Sorrentino 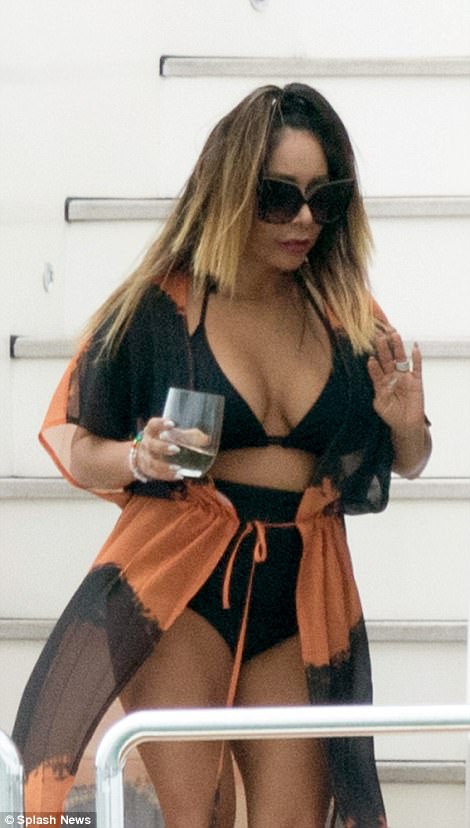 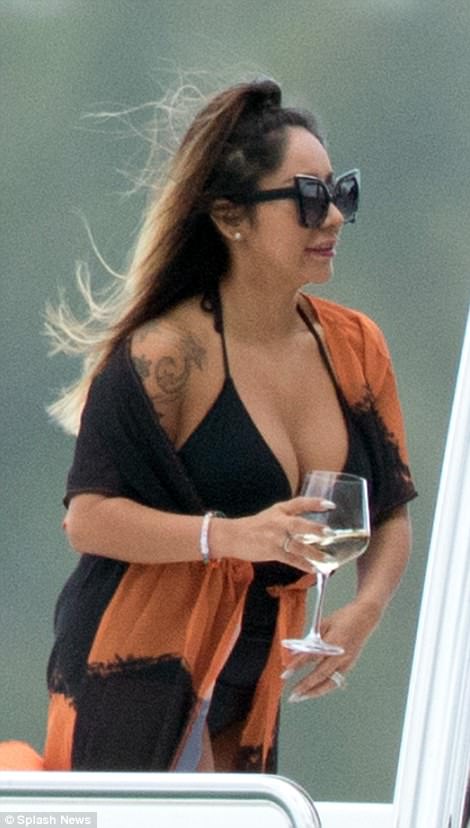 Vacation time: The 30-year-old MTV star carried wine with her as she enjoyed some yacht time with her pals wearing a black tow-piece and orange coverup 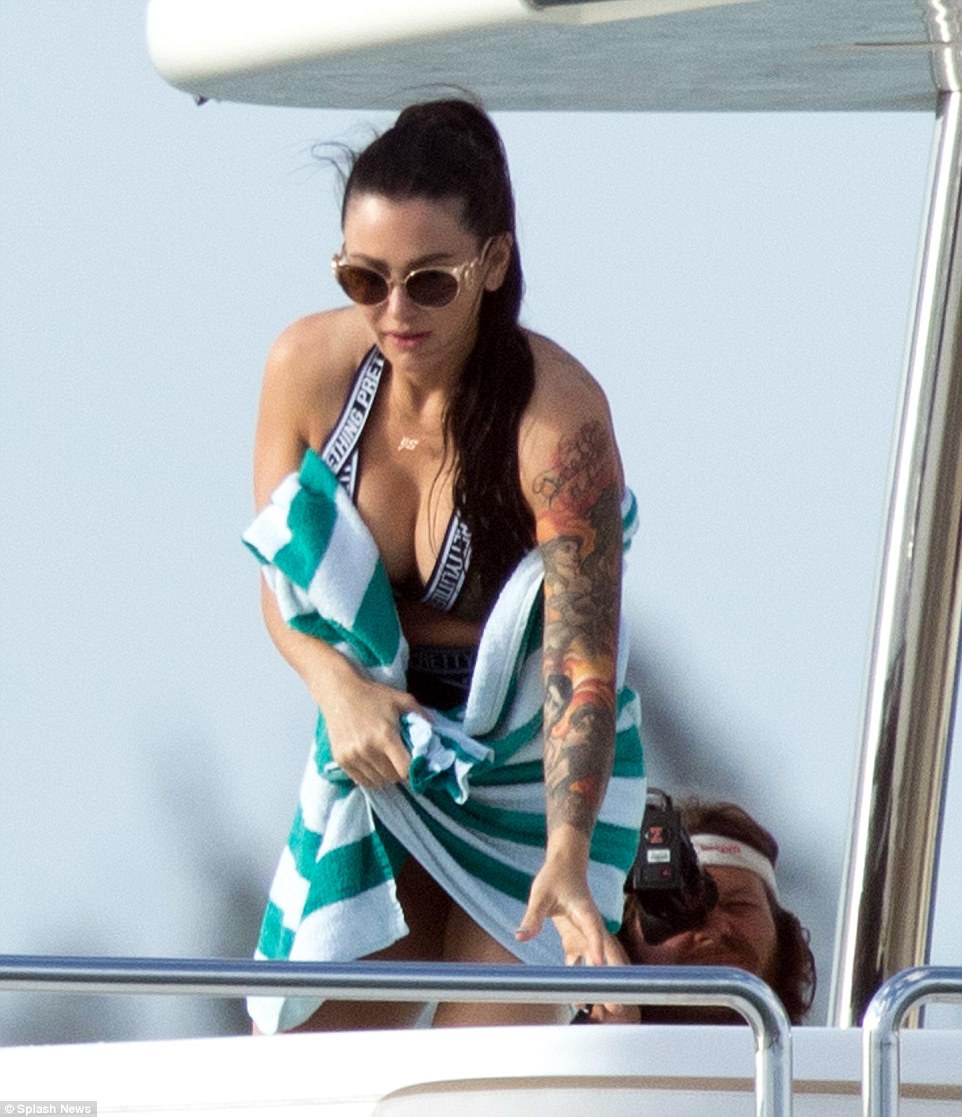 Babe: JWoww donned a Pretty Little Thing bikini and wore her long brunette locks up in a ponytail 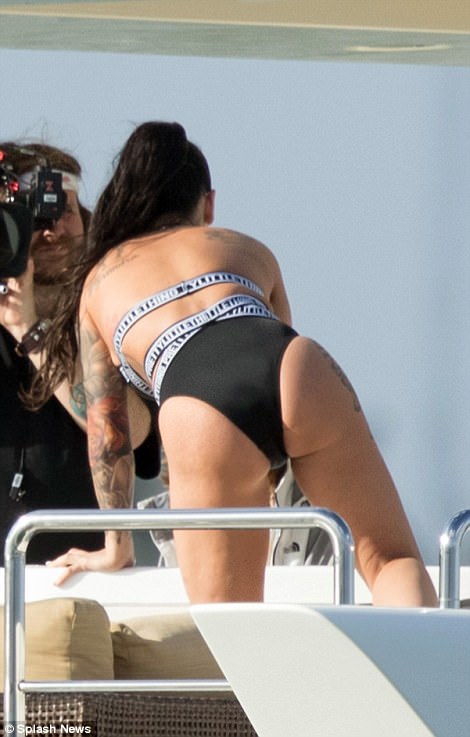 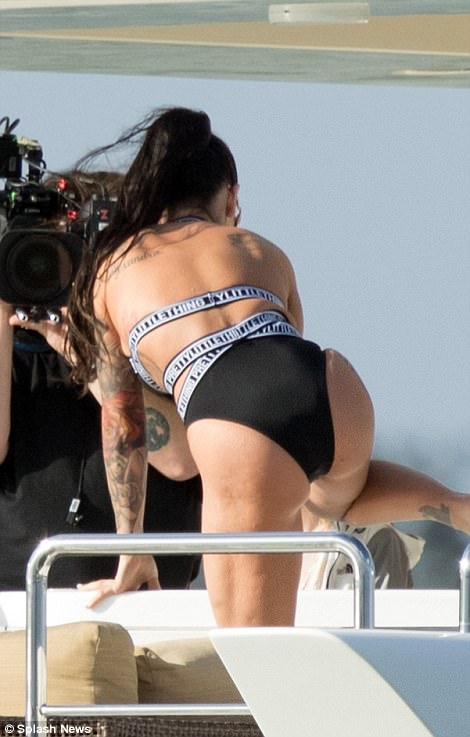 Jersey phwoar! The mother-of-two showed off her gym-honed physique in the strappy swimsuit 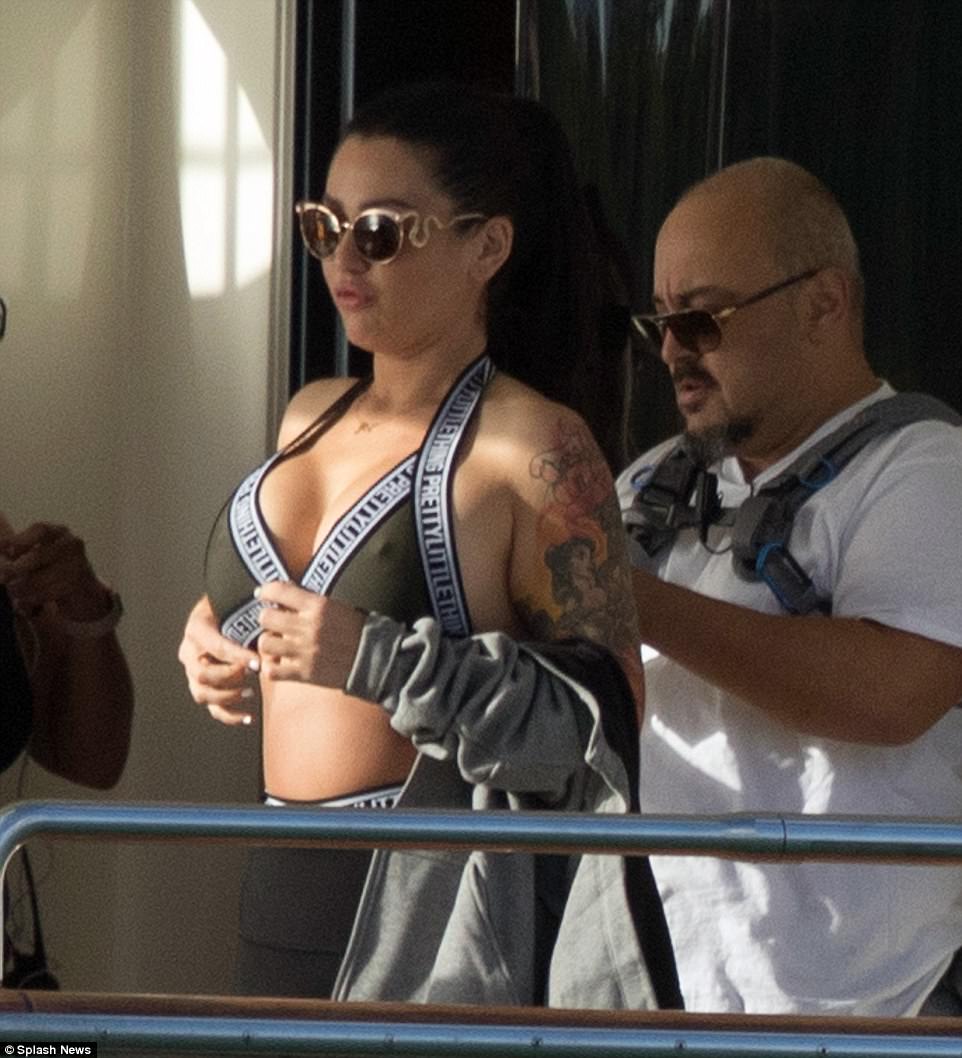 Showing off her tan: JWoww accessorized her look with some gold snake design sunglasses

Meanwhile, JWoww married her husband Roger Matthews in 2015, and they have two children, three-year-old Meilani and one-year-old Greyson.

The original cast-mates all agreed to reunite for the reboot except for Sammi ‘Sweetheart’ Giancola, 30.

It was reported that Sammi didn’t want to deal with any drama with ex-boyfriend and costar Ronnie. 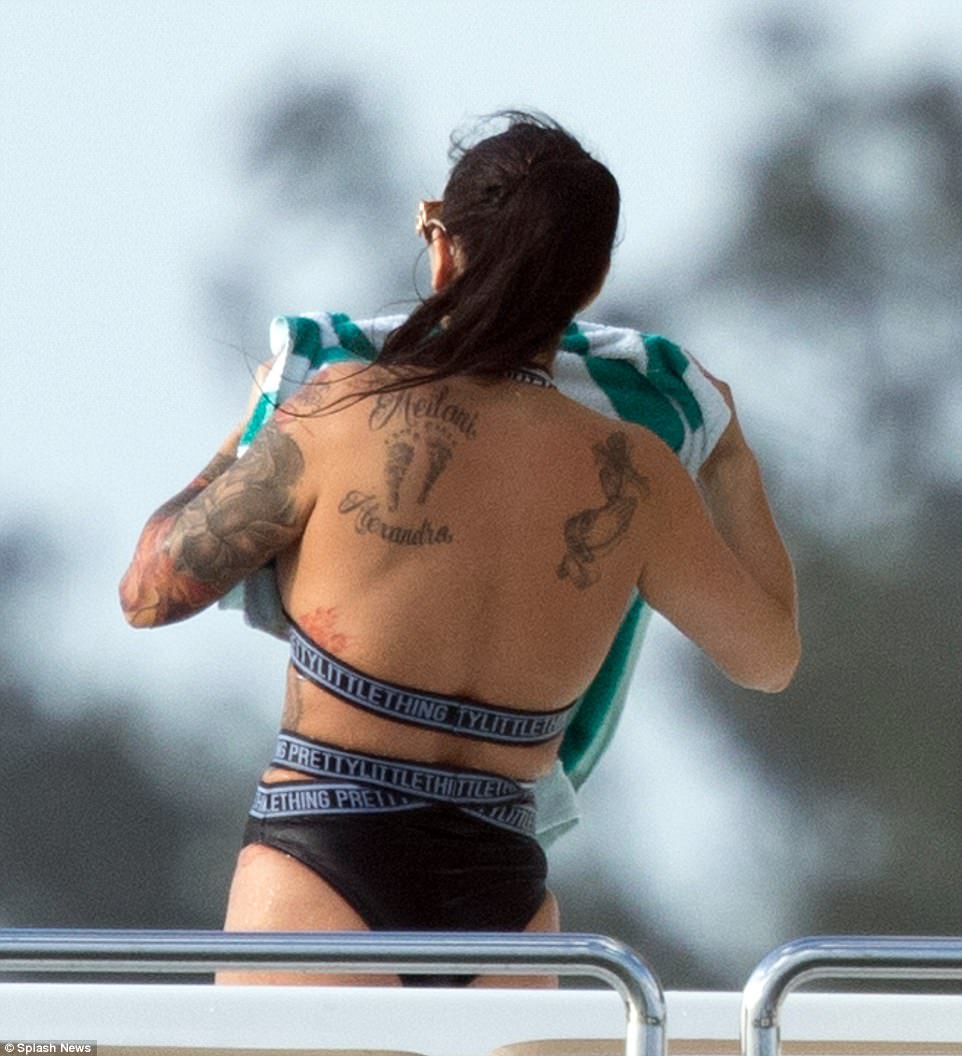 Devoted mom: The brunette beauty showed off her tattoo in honor of daughter Meilani, three. She also has a son, Greyson, one, with husband Roger Matthews 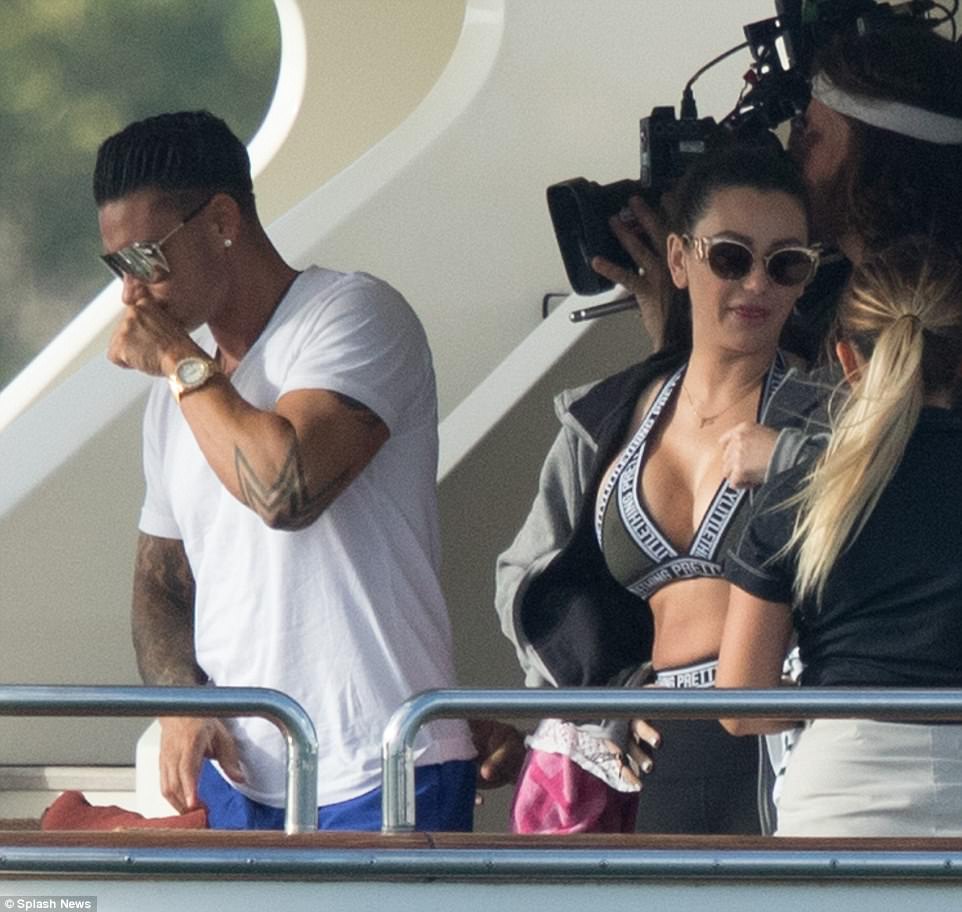 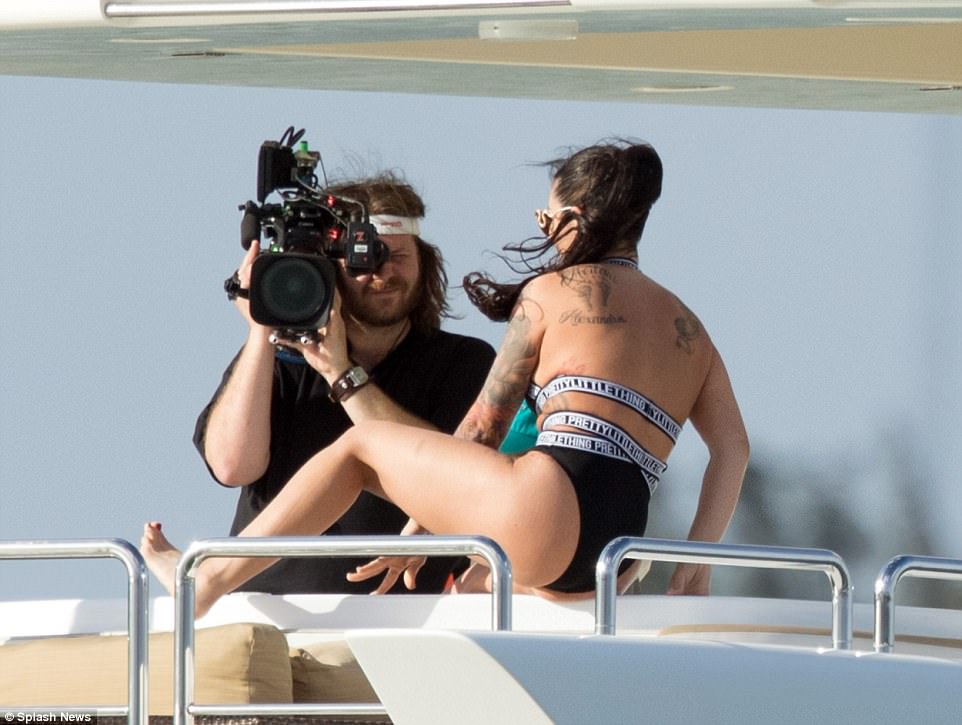 The camera loves her! JWoww looked great a she found herself center of attention

While talking about the highly anticipated reunion on her It’s Happening with Snooki & Joey podcast in December, Snooki said: ‘Everyone’s asking why Sammi’s not doing it. You have to ask her that.

‘I’m not gonna speak for her. But Sammi is just in such a happy place that I feel like she doesn’t want to jump back into that drama if it does happen.

The mom-of-two continued: ‘We’re all begging her to come back on the show. It’s really up to her,’ 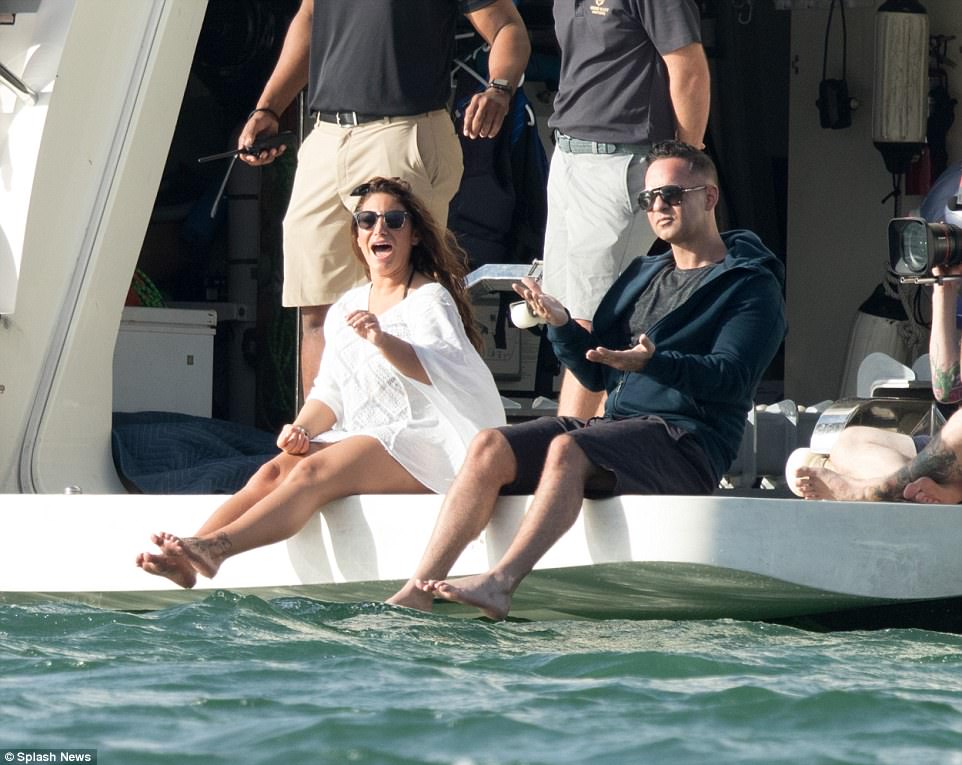 Enjoying the view: Deena and The Situation dipped their toes in the water as they sat on the swim platform 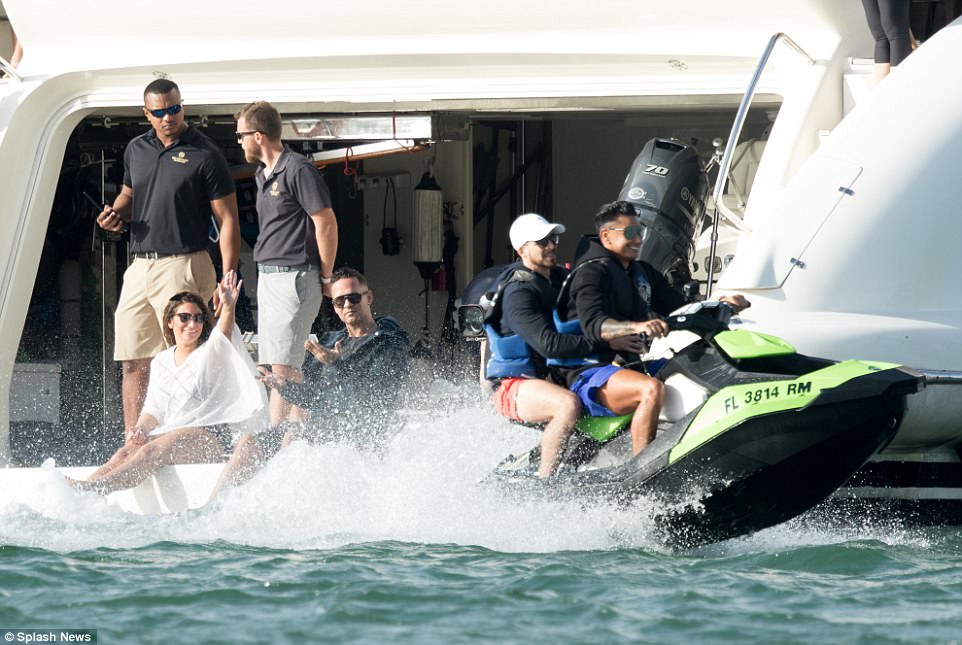 See ya! Pauly D and Vinny went for a while ride on a jet ski as Deena and The Situation cheered them on 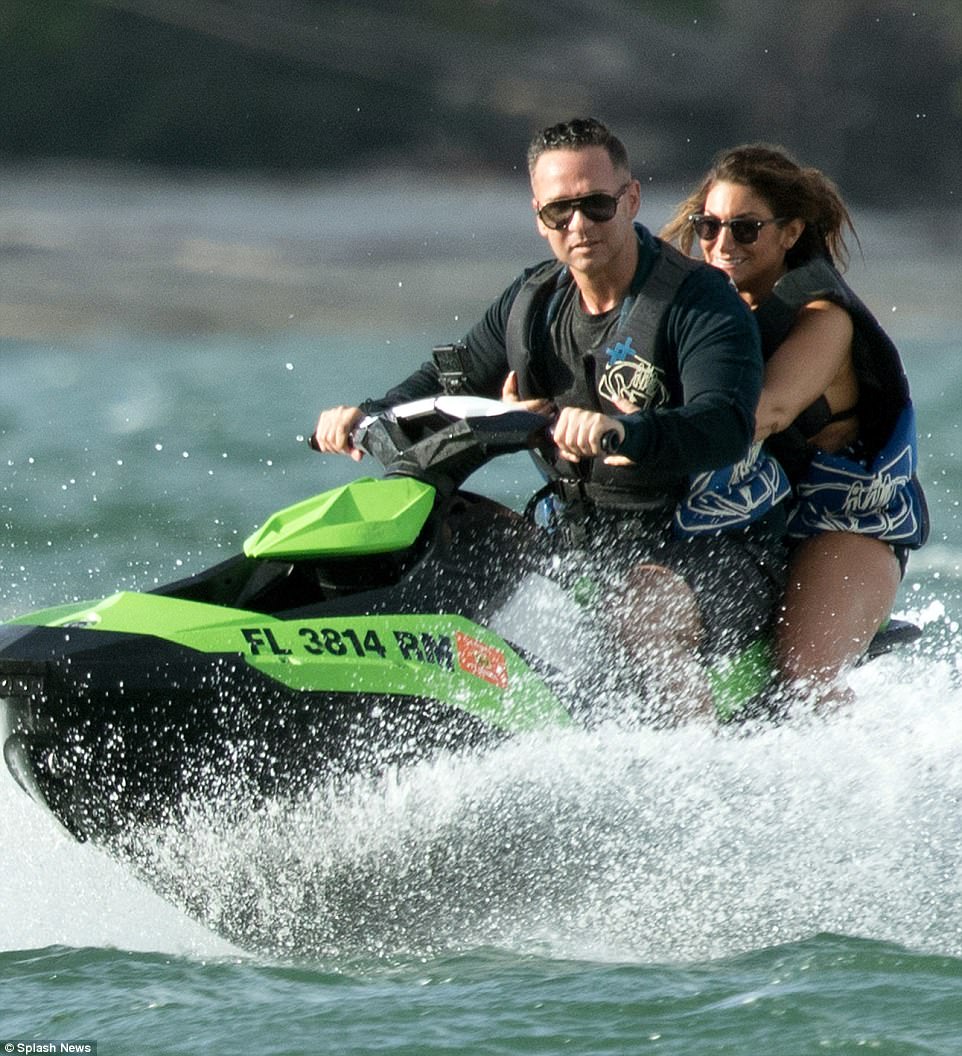 Hold on! Next up The Situation took the driver’s seat while Deena held on tight behind him

‘Everyone pray that Sammi comes back because I feel like she might change her mind. So Sam, if you’re listening, come to the show. Like, stop being — stop it. Stop it right now before I spank you, Samantha!’

Meanwhile last week Mike was in a New Jersey federal court to plead guilty to one count of tax evasion and admitted concealing his income in 2011 by making cash deposits in amounts that wouldn’t trigger federal reporting requirements.

The star and his brother/manager Marc were charged in 2014 and again last year with multiple counts related to nearly $9 million in income from the show.

Both brothers were charged with one count of conspiracy to defraud the United States, which is punishable by a maximum potential prison sentence of five years upon conviction. 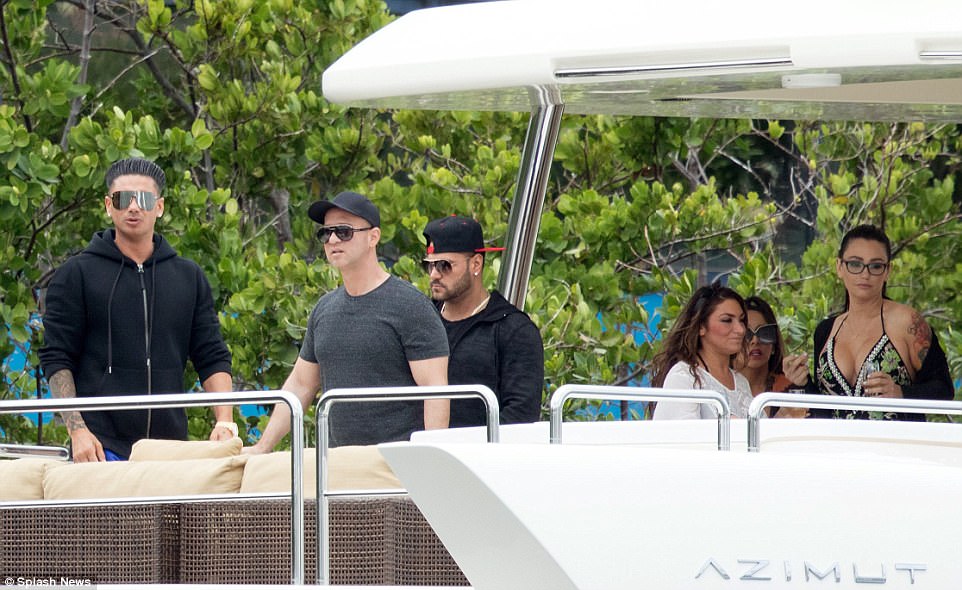 Reunited: Ronnie is pictured wearing a backwards baseball cap as the pals checked out the top deck 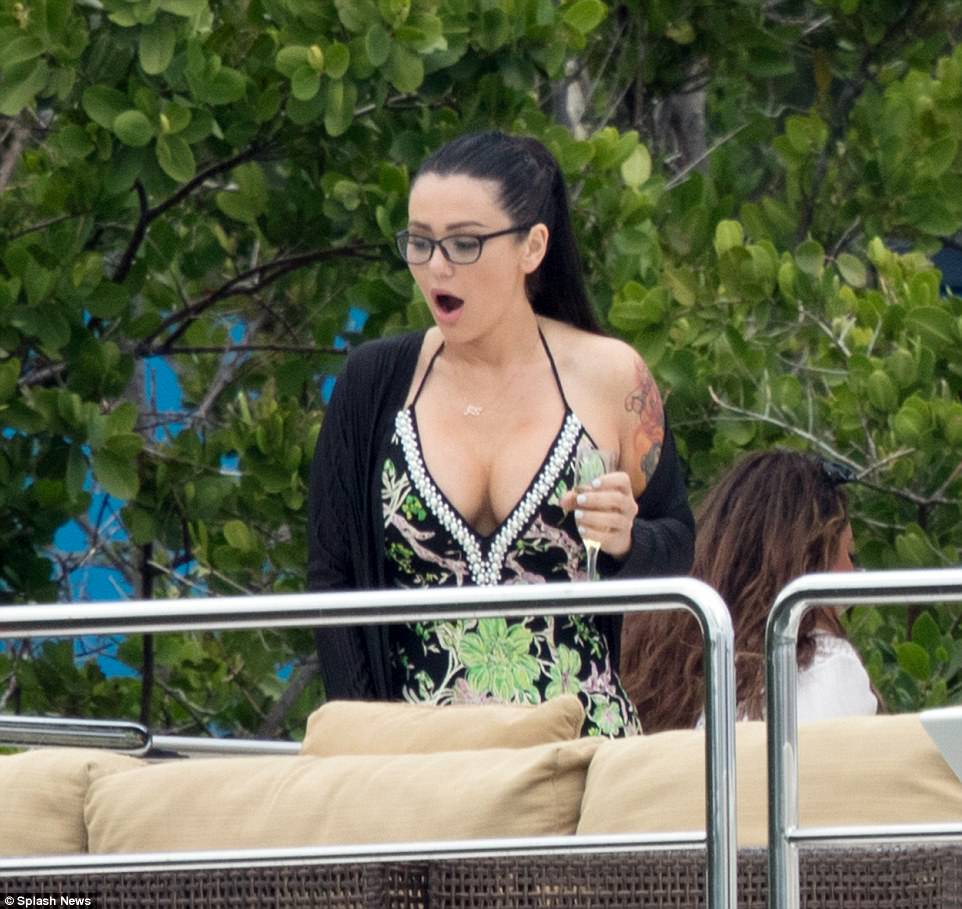 Bubbles: JWoww sipped on a glass of champagne as the festivities kicked off early on Thursday 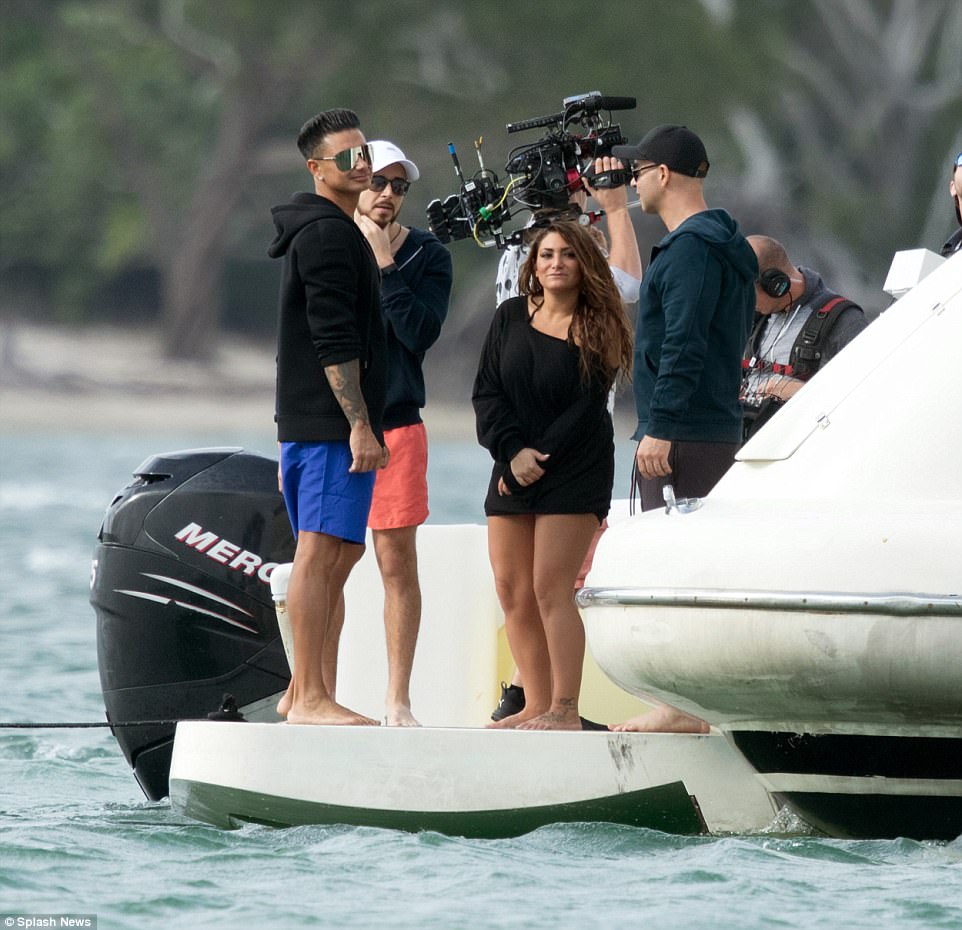 Chilly day: Deena appeared to be cold as the clan got together to film scenes in Miami 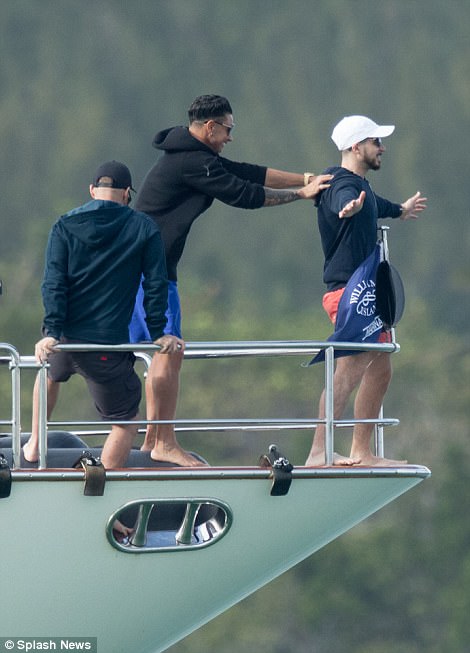 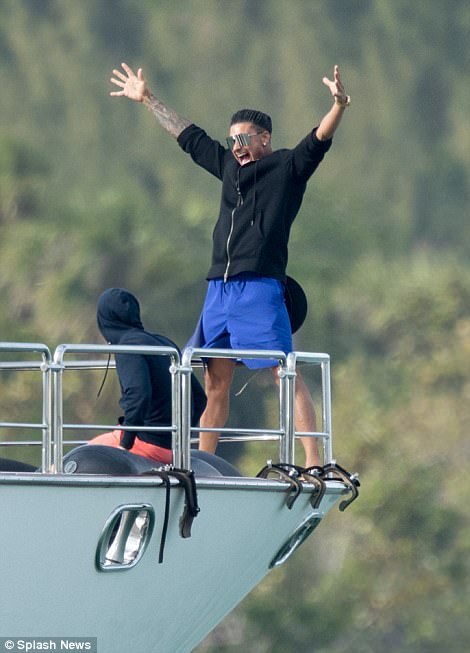 We’re on a boat! Pauly D and Vinny larked about on the bow of the yacht

Both also faced counts of filing false returns, each of which carries a maximum three-year sentence.

Mike was allowed to leave the state to film the reboot under a judge’s condition to abstain from alcohol.

Marc also entered a guilty plea; their sentencing was scheduled for late April.

The hit MTV reality series hit airwaves in 2009 and ran for six seasons, focusing on a group of wild roommates and their summer adventures along the famed Jersey Shore.

The network has yet to announce an official premiere date. 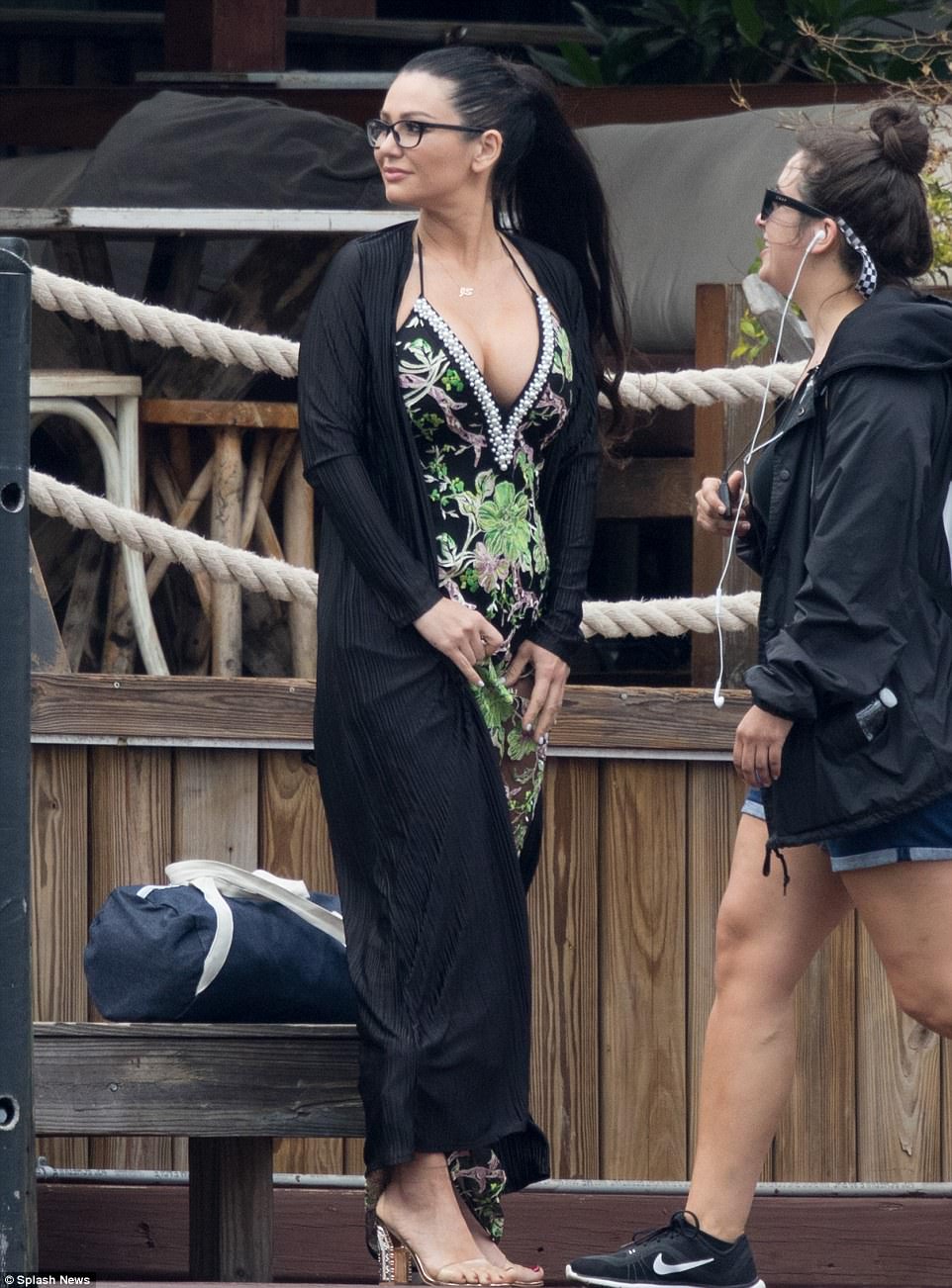 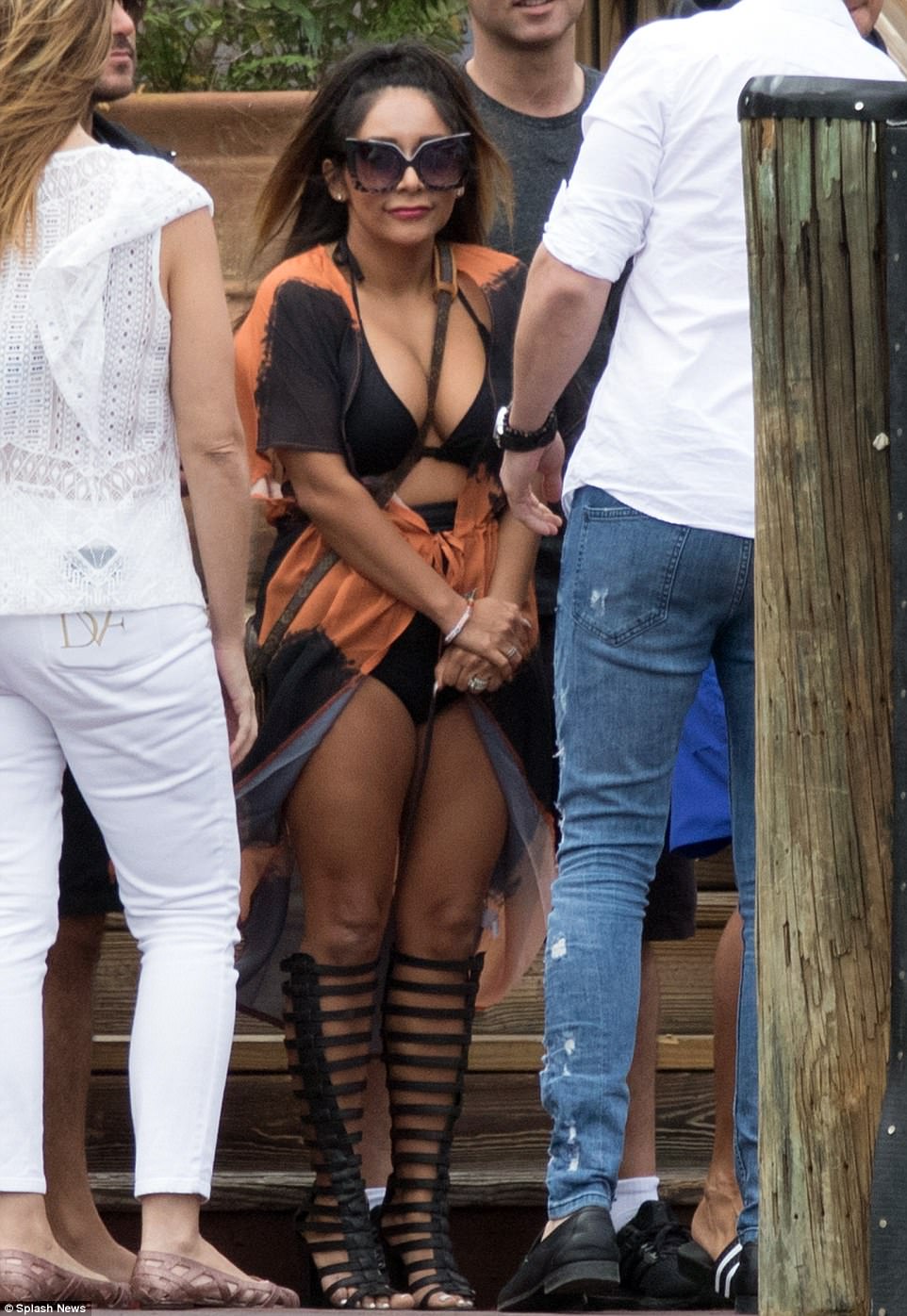 Racy look: Snooki showed off heeled gladiator sandals with her bikini and cover-up 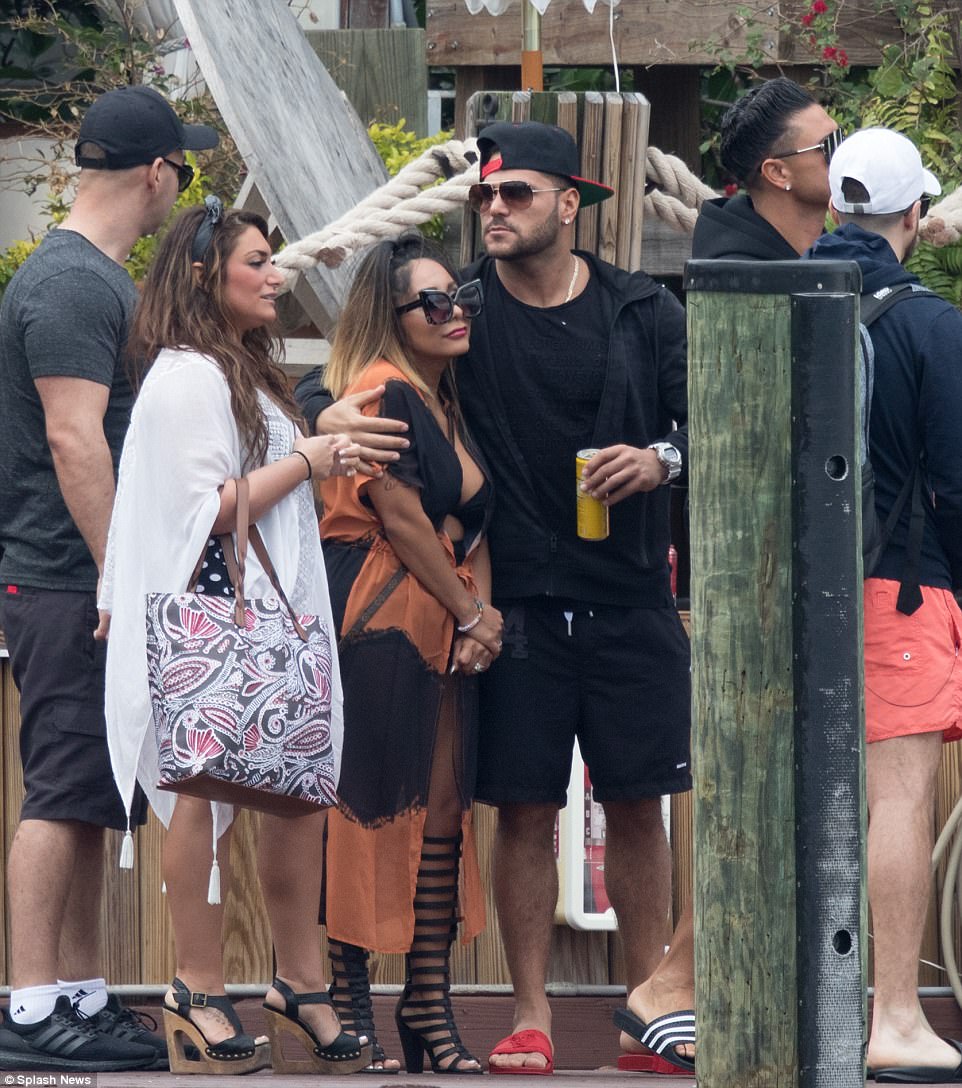 What a gent: Ronnie gave Snooki a squeeze to keep her warm 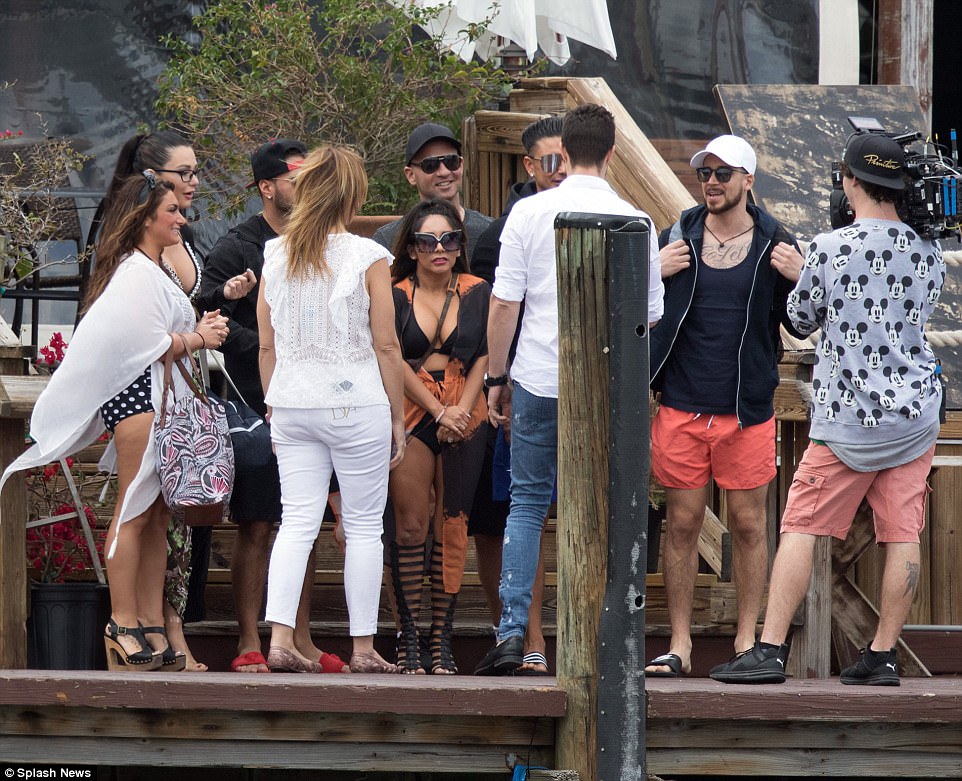 Ready to party: The group came prepared with a change of clothes and sweaters as they waited for their luxury yacht to arrive