Sweeping powers which allow the police to hack into phones and check anyone’s browsing history have been ruled unlawful by the Court of Appeal, campaigners said.

The law, dubbed a Snoopers’ Charter, was hugely controversial and gave British police some of the most far-reaching powers in Europe.

Tom Watson, Labour’s deputy leader, mounted a legal case to challenge the law which he said is ‘fundamentally flawed’.

Mr Watson said the ruling means ministers will have to change the law, known as the Investigatory Powers Act, to bring in more safeguards.

He said: ‘This legislation was flawed from the start.

‘The Government must now bring forward changes to the Investigatory Powers Act to ensure that hundreds of thousands of people, many of whom are innocent victims or witnesses to crime, are protected by a system of independent approval for access to communications data.’

The law, which passed in late 2016 while Theresa May was Home Secretary  forces electronic data to be stored by app companies for 12 months.

It can then be collected by police and the security services.

Ministers said the sweeping powers were needed to help in the fight against terrorism and cyber crime.

But critics said it is an attack on privacy and an affront to civil liberties, and it faced stiff opposition in the Commons and the Lords.

Peers also warned that would ‘chill’ journalism and could have stopped important exposes and criticism of figures such as ex BHS boss Sir Philip Green.

In 2016, the Court of Justice of the European Union (ECJ) ruled the mass retention of data was illegal. 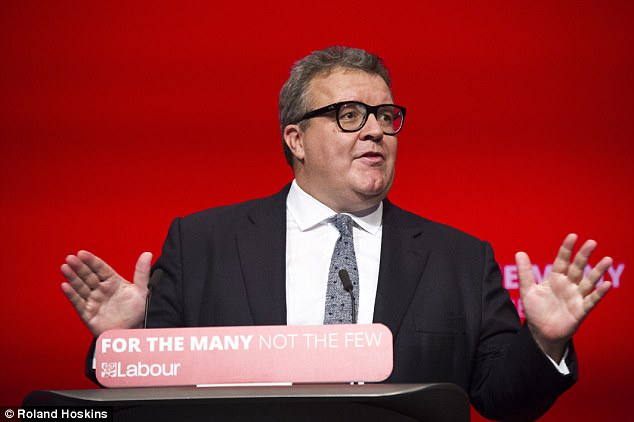 Tom Watson, Labour’s deputy leader (pictured at Labour’s party conference in Brighton in September) mounted a legal case to challenge the law which he said is ‘fundamentally flawed’

It found that it violates people’s privacy could only be justified by the objective of fighting serious crime.

And it ruled that access to data should be subject to prior review by a court or independent body.

The Court of Appeal today agreed that accessing retained data without proper oversight or if there was no serious crime was inconsistent with EU law.

Ministers have recently announced plans to launch a consultation on new additional safeguards in light of the ECJ decision to ensure access to communications data was limited to investigations into serious crime.

‘The latest incarnation of the Snoopers Charter, the Investigatory Powers Act, must be changed.’