More snow showers are on the way as the country braces for a three-day cold snap which could see temperatures plunging to a freezing low of 19F.

Trick or treaters have also been warned to wrap up warm as it looks like there might still be a bit of a bite in the air on Halloween night this Wednesday.

Tonight temperatures are predicted to be as low as ‘-7C (19F) in Scotland where there is snow on hills, -5C (23F) in the west of the UK and there’s a ice risk on Monday morning in the North-East,’ says the Met Office.

On Saturday night Sennybridge in Wales recorded an extreme low of -3.3C (26F) and the highest maximum temperature recorded by the Met office was 10.4C (50F) in Langdon Bay, east Kent.

The Hatton family go for a walk in the snow in Glenshee in the Cairngorms, Scotland, today after snow fell through the night 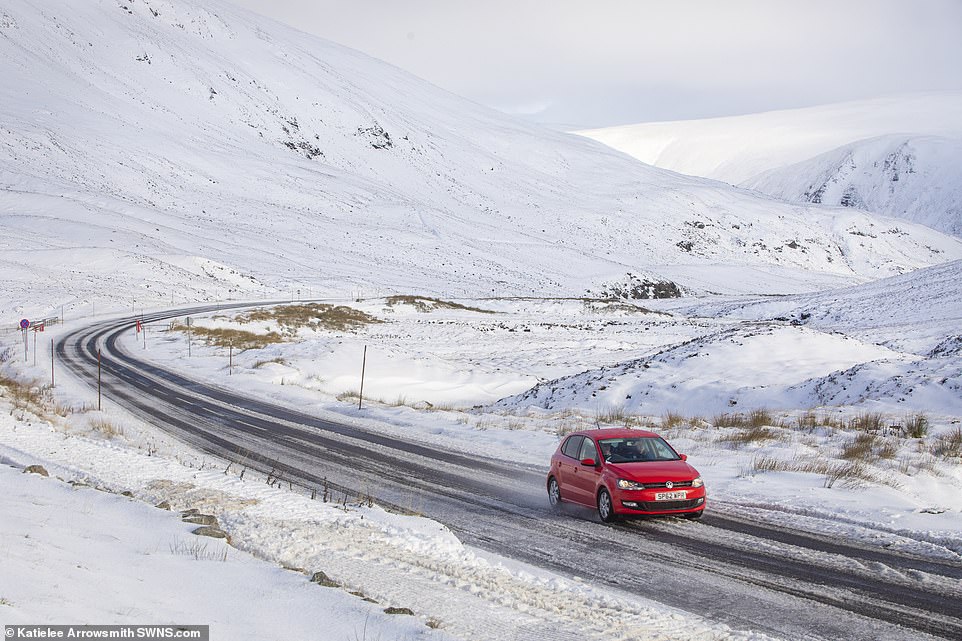 A car in the snow on the A93 at Glenshee, Cairngorms, Scotland today. Temperatures could get as low as -7C overnight 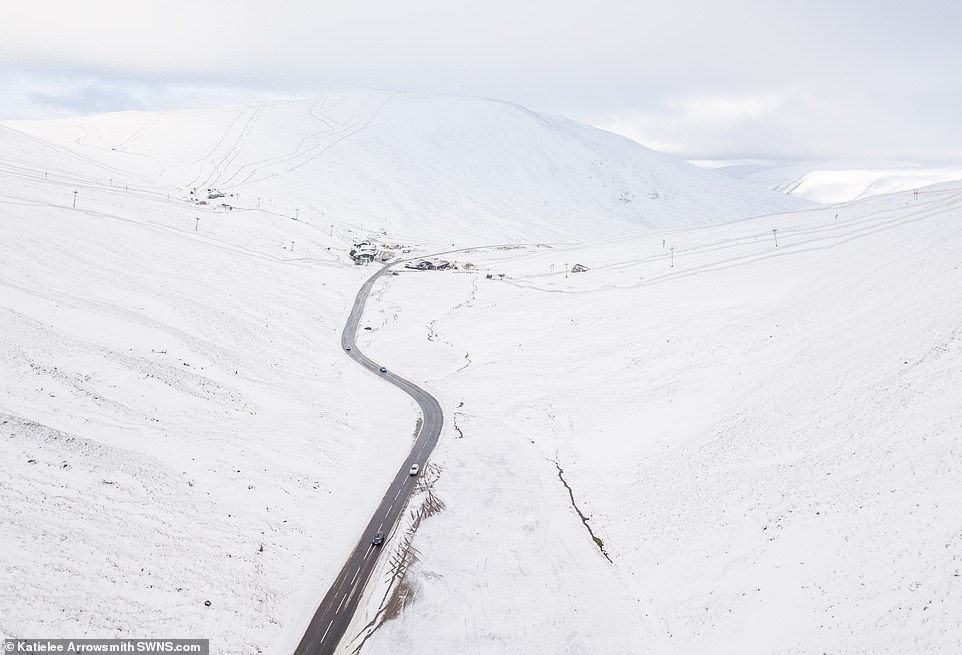 The hills of Glenshee ski resort in the Cairngorms, Scotland, are covered with a dusting of snow after a cold weekend

Met Office meteorologist John West said: ‘At the moment, we have got some some quite cold crisp weather with plenty of sunshine about. As we get to mid-week, it is going to to be increasingly unsettled.

‘It will be likely less cold by Wednesday but by no means warm. If anybody is going to be out and about on Wednesday it might be a good idea to have a coat handy and maybe also a waterproof.’

Speaking to MailOnline today Mr West said: ‘We saw a fresh start this morning with lots of autumnal sunshine in Northern Ireland and places in the north west seeing the lions share of the sun, but it was a very cold night.

‘Throughout Sunday Kent and London can expect showery rain and there will be patches of sleety snow falling in the Pennines and Scotland.

‘Sunday night temperatures could get as low as -7C or even -10C in some places and some freezing fog patches could appear in Cheshire, Merseyside and up the M6 on Monday morning.’ 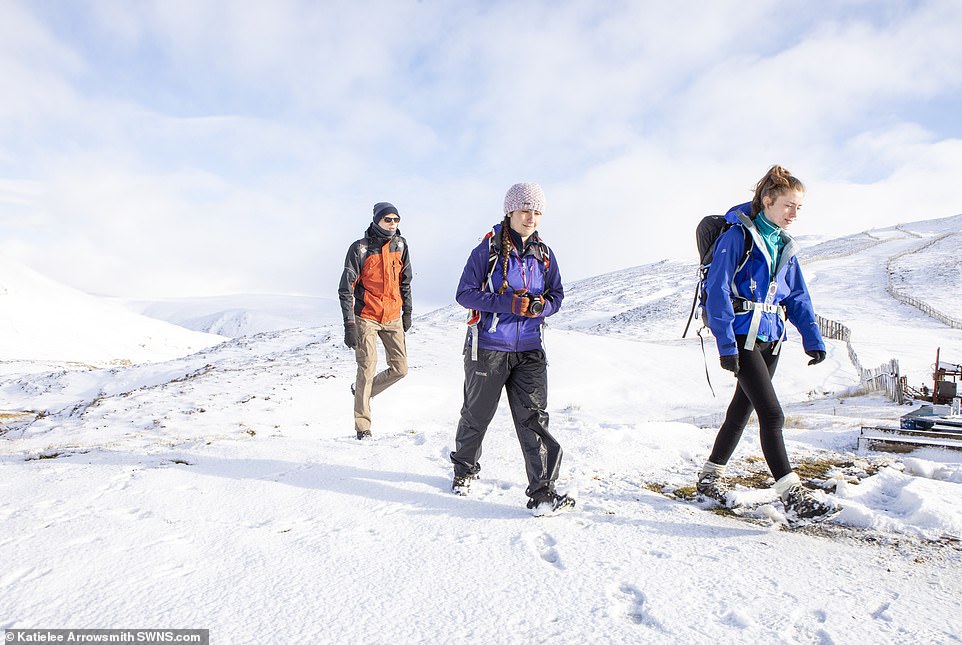 Hikers in the Cairngorms, Scotland, enjoy the cold weather today after one of the coldest October weekends in ten years 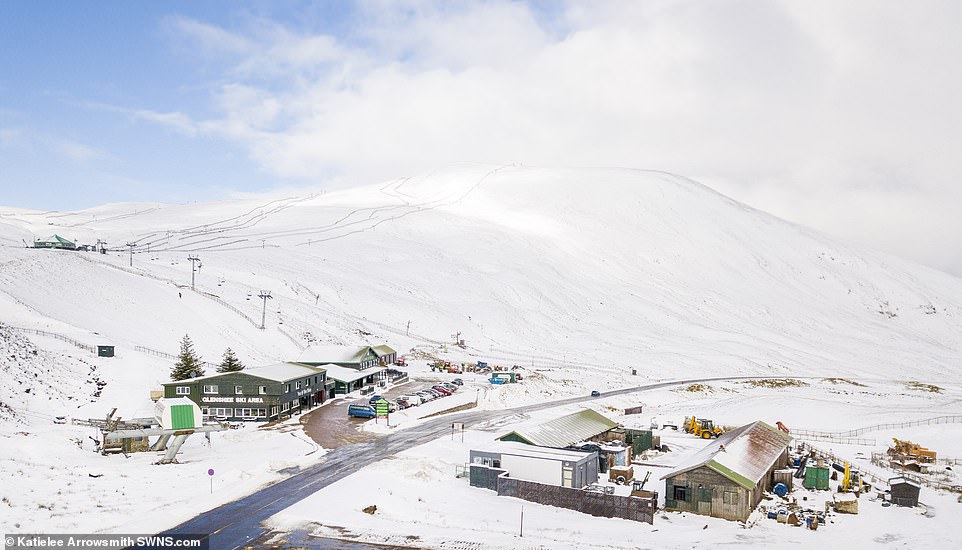 A drone captures snowy hills in the Cairngorms, Scotland, on a bright Sunday afternoon where temperatures are lingering around freezing 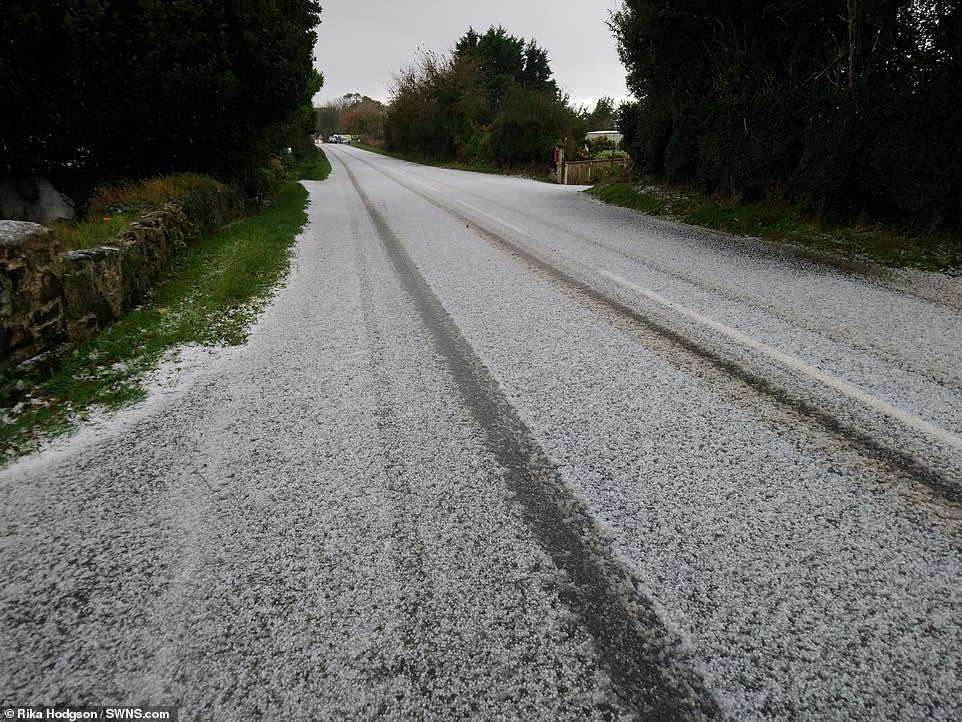 Tyre tracks can be seen in the light dusting of snow that covers the road in Leedstown, Cornwall, this morning

However temperatures are set to relent next week after parts of the UK saw snow during this weekend’s autumn cold snap.

Snow was seen in higher parts of Scotland and north-east England on Saturday. Hilly areas of the Pennines woke up to a wintry blanket, while County Durham had a frosty start as well as the West Midlands seeing a flurry of snow.

A winter wonderland befell North Yorkshire with the residents of Guisborough finding autumn had been replaced with winter as a dusting of white covered the streets and rooftops.

The Met Office expects showers will continue to hit North Sea coastal areas on Monday. Once any fog patches clear, it should be largely dry elsewhere with plenty of sunshine but still cold.

It should turn wet and windy across many eastern areas on Tuesday, with snow possible across Scottish hills. 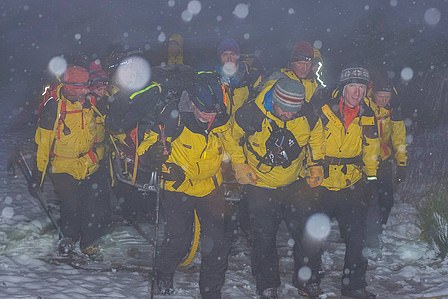 Two women were rescued in sub zero temperatures after they tried to camp out during the snow in the Cairngorms.

Cairngorm Mountain Rescue Team were called out within 30 minutes of just completing an earlier exhausting rescue.

The alarm was raised around 9pm last night when the women – one aged 26 from the Aberdeen area and a 30-year-old from London – were cold and wet in Lairg Ghru.

They had been planning to spend the night out doing a two-day traverse but got caught out by the conditions.

‘They were panicking a bit. It was winter conditions, with snow and sub zero conditions,’ said Cairngorm MRT leader Willie Anderson.

‘They were well equipped for the traverse, but their tent had been trashed by the wind and they and their sleeping bags were wet. It was not a good night to be out in those conditions with wet gear.’

Five members of the team reached the women and walked them off the hill by 1am. They were given dry clothing and warm food and drink.

Earlier at 3pm, 18 members of the team carried an injured 32-year-old walker by stretcher more than two miles.

The man, who was from England and with his mother, dislocated his knee in the Northern Corries. He had slipped in Coire an Lochain – on his way back from Ben Macdui, the UK’s second highest mountain – and was unable to continue.

‘It was the the first time that anyone can remember sledging a stretcher on snow in October,’ said Mr Anderson.

Last week two walkers missing in the Cairngorms were blasted by rescuers as ‘not having a scooby’ after they were found in appalling conditions with winds gusting to 100mph.  The pair from the Glasgow area tried to navigate using an app on a mobile phone.

Members of Cairngorm, Braemar and Aberdeen mountain rescue teams spent over six hours searching for the walkers on Tuesday night. Mr Anderson said it was also the third rescue in weeks involving walkers lacking a map and compass. 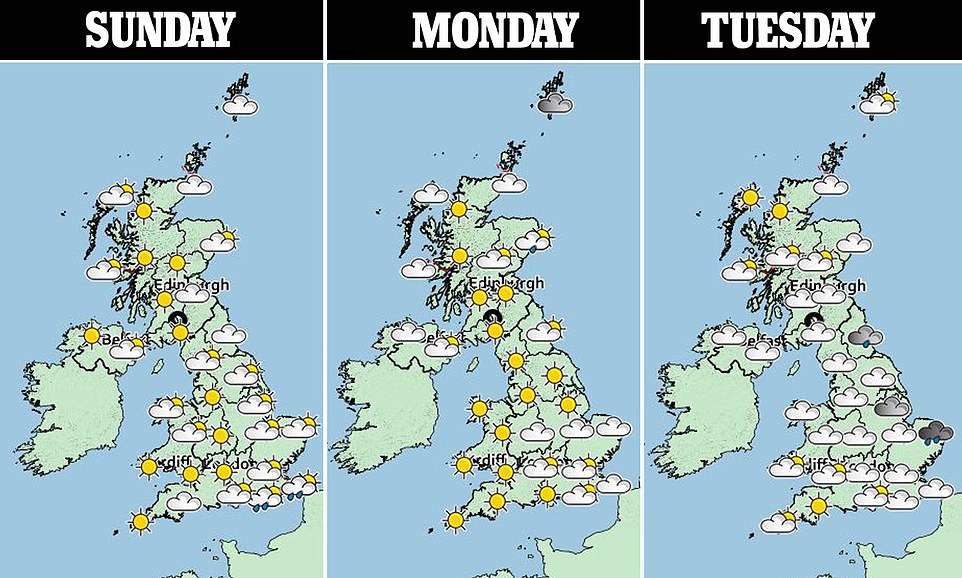 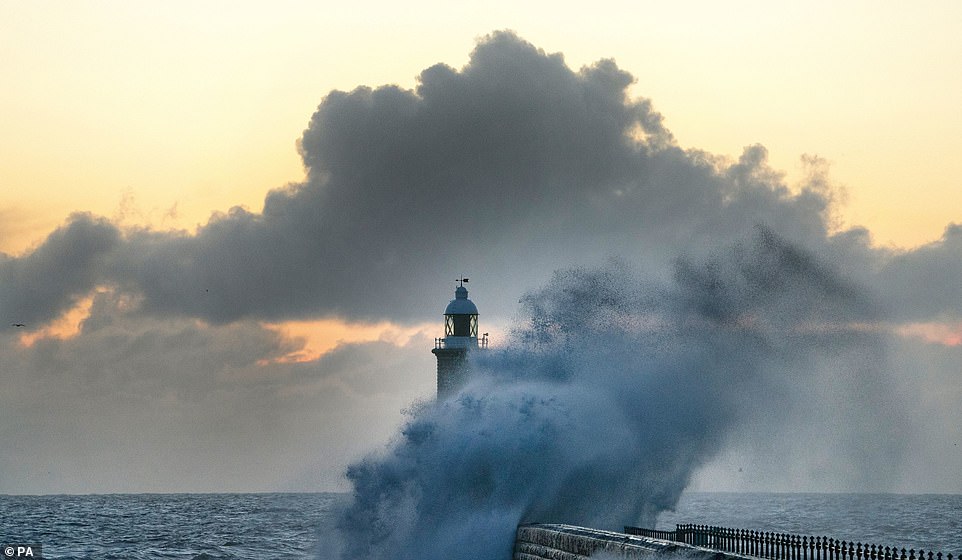 It was a brisk and sunny start for much of the country today. Pictured are the choppy seas at Tynemouth Pier, in North Shields 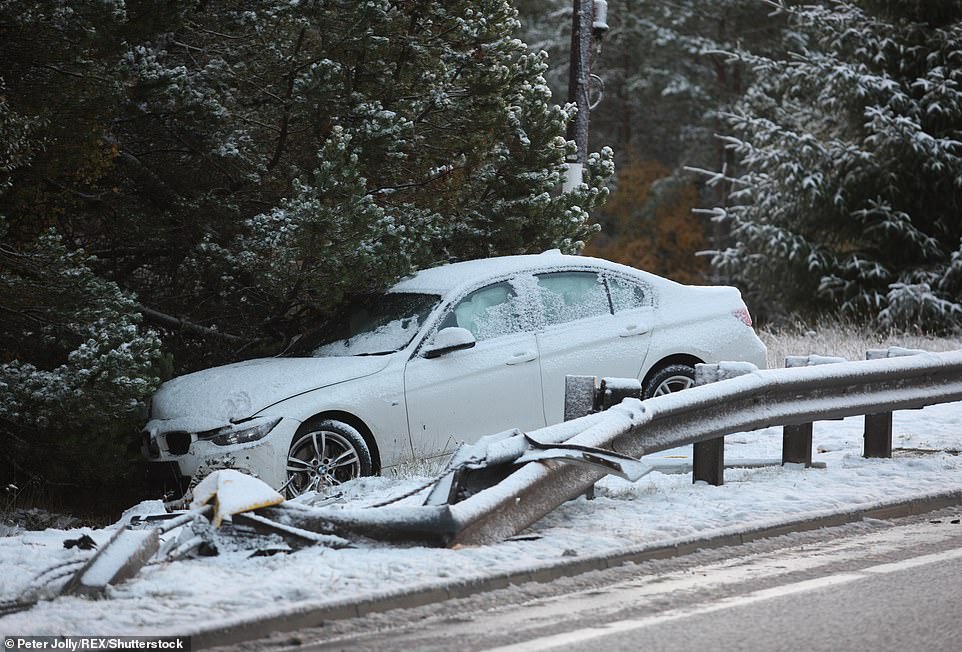 Mr West said that by Thursday morning temperatures are expected to be around freezing for Scotland, between 4-5C in London and there may be a touch of frost in the north west with temperatures of around 2-3C.

The snow fell on one of the coldest October weekends experienced in ten years with temperatures struggling to get into double figures, says the Met Office.

John West at the Met office explained that the North East was getting ‘mostly sleety, wet snow’ on Saturday and said ‘it is going to be cold over the next couple of days.’

‘We will have some high pressure building in giving us a more settled picture, but we may continue to see some snow showers over the weekend. Temperatures will recover quite slowly but it is not likely to be as wintry.’

Temperatures in Guisborough hovered around zero overnight on Friday while snow showers from the North Sea were blown to the land.

Met Office spokesperson Sarah Kent said: ‘It is the first break out of arctic air this year, and it has brought with it a dusting of snow to the highest ground. 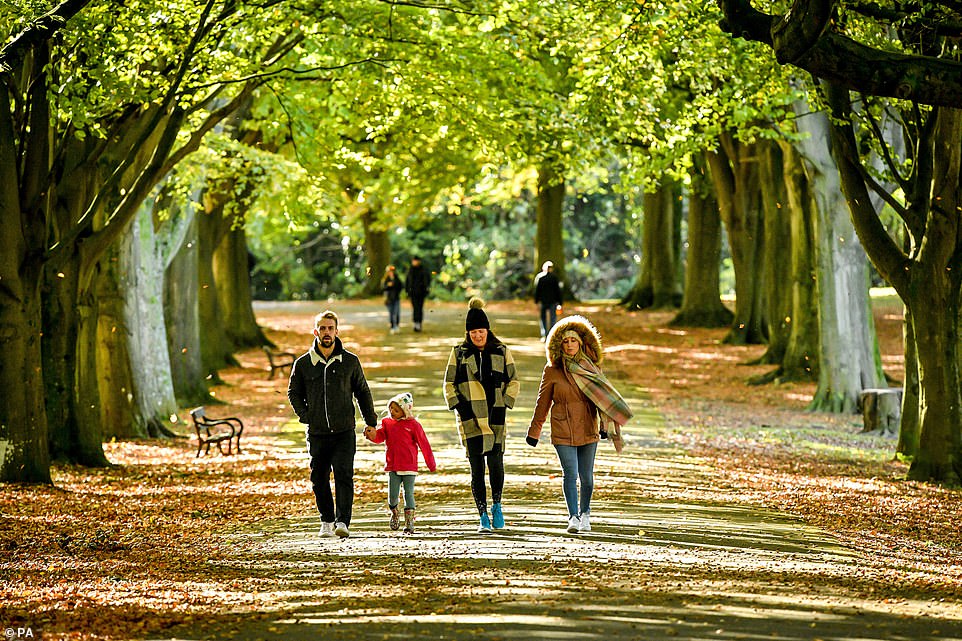 People walk through windblown leaves in Clifton, Bristol, this morning where the crisp autumnal weather is in full swing 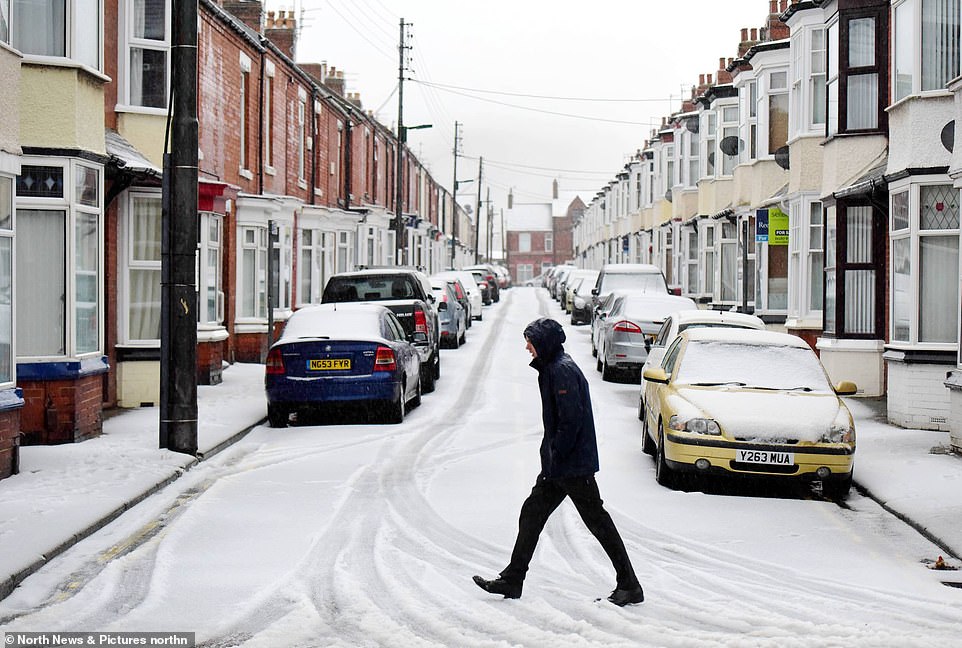 The streets and houses of Guisborough, North Yorkshire, were covered in a dusting of snow on Saturday morning where temperatures hovered just above zero 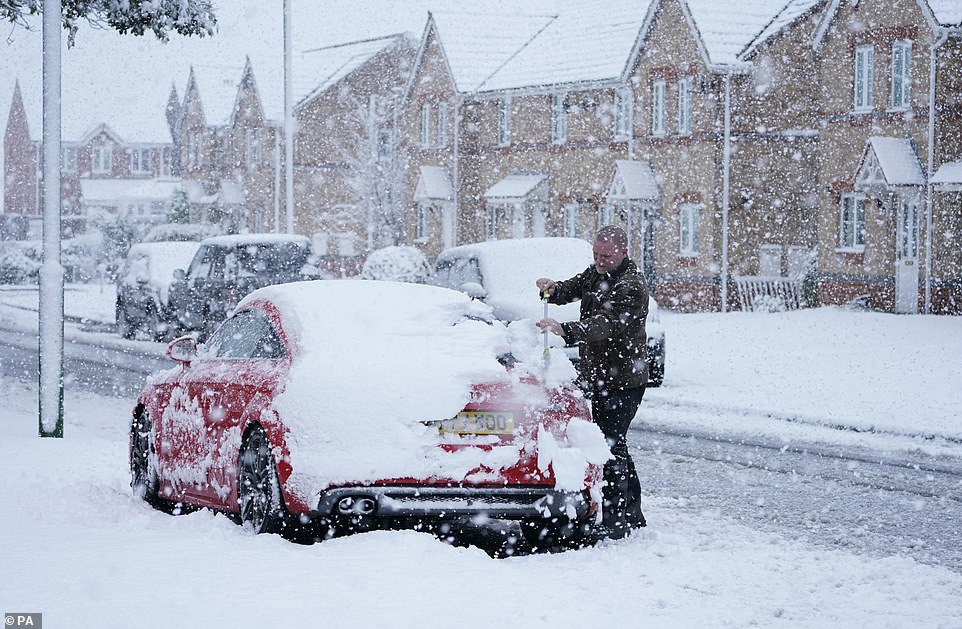 A man clears the snow off his car near Consett, County Durham today after snow fell on high ground on Saturday

‘The showers coming in from the North Sea will continue throughout the day but it is due to get warmer meaning the snow will turn to sleet. Anyone wanting to see snow will have to get in their cars and drive to the highest ground before it disappears.’

Gritters are on standby across the country as the frosts are set to continue over the next two nights, bringing lows of -2C (28F).  Wind chill from biting northerly breezes will make it feel several degrees colder, forecasters say.

Met Office spokesperson John West said: ‘We’ve seen some snow over higher ground but aren’t expecting it to come too far in land and it won’t stick over lower ground. 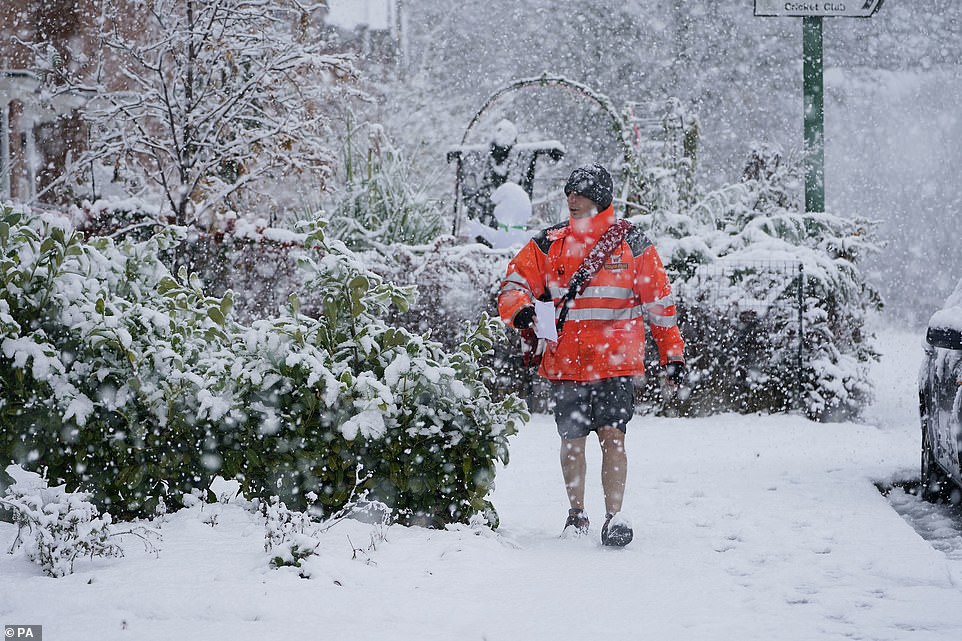 A postman braves the snow in shorts and a wooly hat while delivering mail near Consett, County Durham, yesterday 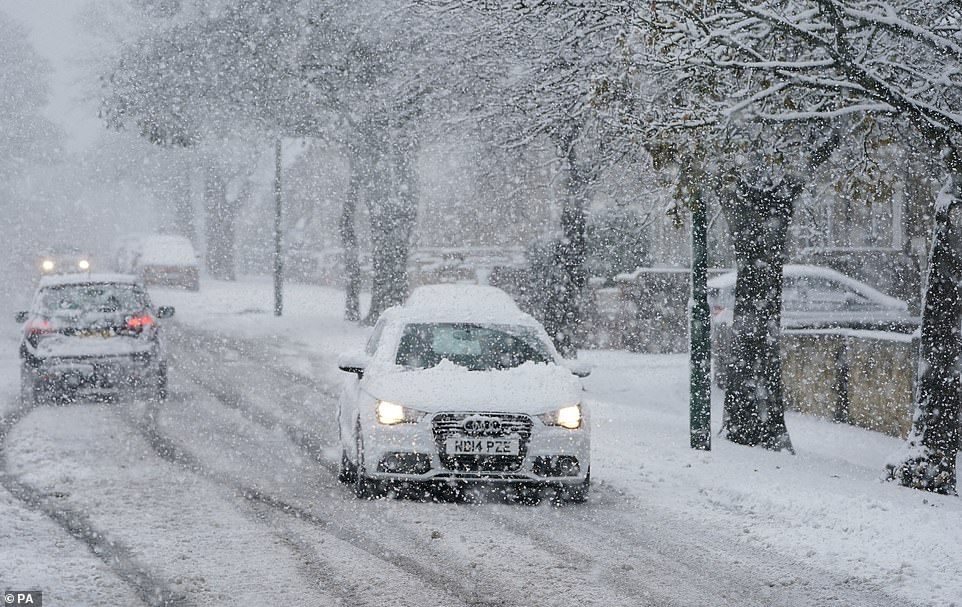 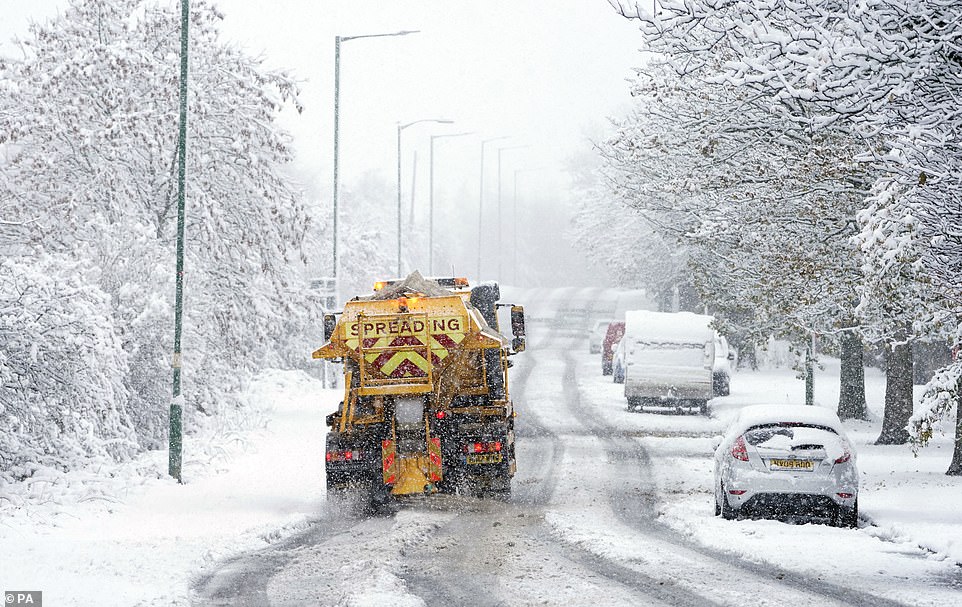 A gritter lorry was out in Greencroft, County Durham, as snow starts to fall heavily yesterday

‘There are some icy stretches expected tonight [Saturday] and it’ll be a frosty start on Sunday, although there will be some sunshine as well. It should be a little less cold tomorrow as the northerly wind will not be as strong.

‘This has been one of the coldest October weekends we’ve seen in the last 10 years with temperatures struggling to get into double figures.

‘We have seen some snow this morning, more up in Scotland. Aviemore has had around 1cm.’

The forecaster added: ‘It is going to be cold over the next couple of days, but will start to peter out tomorrow.

‘We will have some high pressure building in giving us a more settled picture, but we may continue to see some snow showers today and tomorrow.’

The weather for next week includes sunny spells but patchy showers in the west on Wednesday. Later on in the week, it is likely to be settled in the south, but windy with rain further north and becoming milder.

The chilly snap has bought an end to the largely mild start to autumn, with people advised to dig out their warm winter clothes over the weekend as the Met Office issued ice and snow warnings in some areas.

Even in southern parts, where temperatures are forecast to be around 7C (45F), the wind chill factor means it will feel several degrees cooler, forecasters said – with travel conditions becoming ‘difficult and hazardous’. 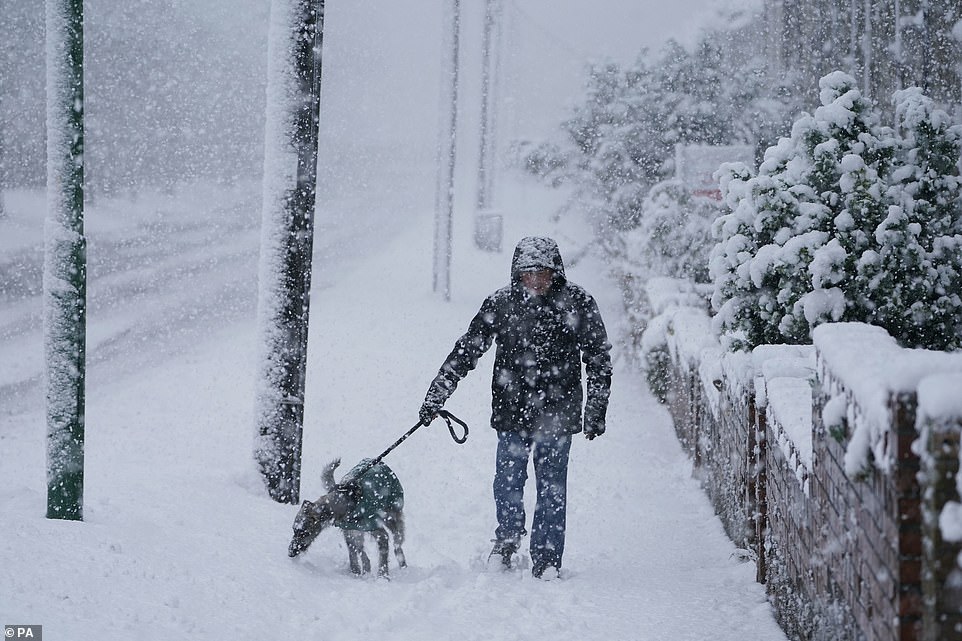 A man and his dog both wrap up warm in their winter coats to go out for a walk in Greencroft, County Durham yesterday 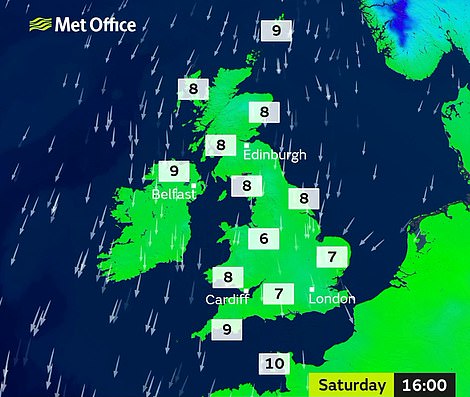 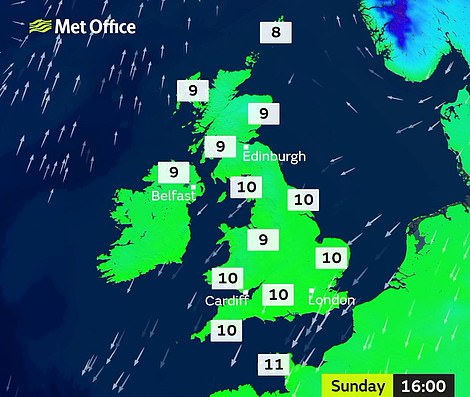 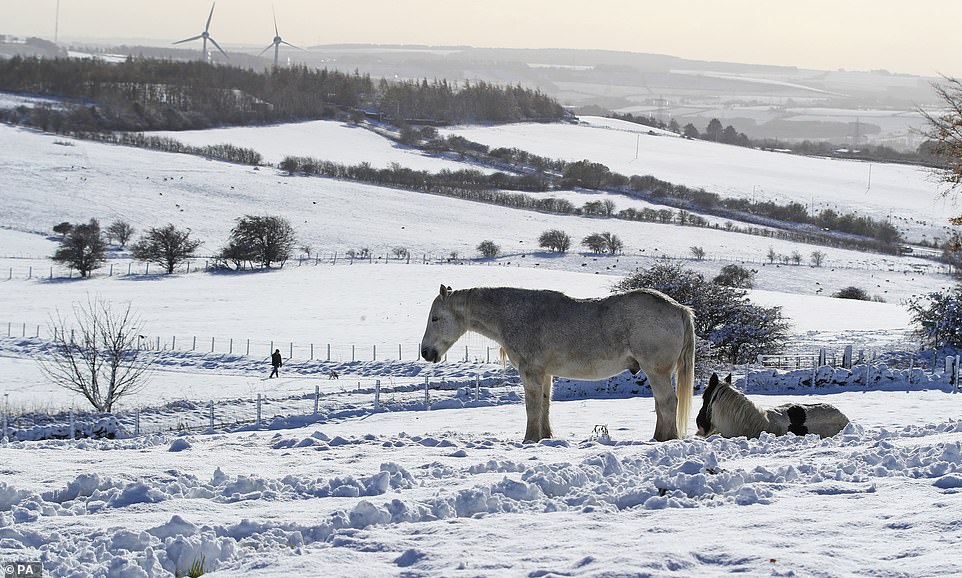