‘Snowflake’ millennials are the most stressed generation

A quarter of millennials are crumbling due to the pressures of their work, studies and finances, a new survey claims.

So-called ‘snowflakes’, the controversial term for those aged between 16 and 24, are now the most stressed generation in Britain.

The poll of 2,000 by market researchers Mintel revealed that around a sixth of Britons, or 15 per cent, suffer from daily stress.

While just under a tenth of the over-55s, who often have to worry about mortgages and health problems, claim to be stressed every day.

Around 85 per cent experience stress of anxiety at least sometimes, with 30 per cent claiming to do so three times each week.

Millennials report they feel the strain of life the most, with a quarter reporting they’re stressed out every day with the pressures of work, study and money worries (stock image)

Richard Caines, senior food and drink analyst at Mintel, said: ‘Britain’s young are feeling pressure on several fronts including academic, work and financial factors, and for some this is causing anxiety and stress on a daily basis.

‘The greater visibility of mental health issues seen in mainstream media can help drive awareness of less severe manifestations of anxiety and stress in consumers’ lives.

‘High incidence of anxiety and stress and not finding enough time to relax suggest untapped space for brands to promote ways of relaxing.

‘These can include products such as mindfulness apps, teas, bath and shower products, as well as adult colouring books.’

The poll also showed the very different coping mechanisms people have to deal with stress.

Two fifths of all those quizzed revealed they turn to music, but for millennials the figure was closer to two thirds.

Two fifths go for a walk to clear their heads and a third turn to comfort foods – and for women it’s more common at 39 per cent.

But despite the pressures of modern life just a third spend time relaxing every day, the survey also revealed.

Despite the perceived importance of mental health, just three in 10 said they felt mentally stimulated every day.

And just under half felt mentally stimulated less than three times a week, if at all.

The controversial term is now fashionable to use when describing young adults who are seen as taking offence easily and emotionally vulnerable.

Almost three quarters of 16-24 year olds surveyed believe the moniker is unfair and are adamant it could negatively affect their mental health.

The findings, made by insurance firm Aviva, were derived from a survey of 2,022 British participants between those ages.

The thoughts were echoed by adults of all ages, with 58 per cent claiming the label is unfairly applied, the survey showed.

A further 57 per cent felt that the term ‘generation snowflake’ could also harm the mental health of young people.

Poor diet and sleep with lack of exercise

Getting enough sleep, eating a healthy diet and regularly exercising are ranked as the top three habits for staying healthy in over two thirds of respondents.

But only a fifth – 22 per cent – admitted they got enough shut eye with a sixth – 14 per cent – of the middle aged between 45 to 55 the least likely to get daily amounts of sufficient sleep.

A healthy diet was seen as important by nearly three quarters of women and the over 45s and a fifth actually ate their five a day.

When it comes to getting up and doing a bit of physical activity, just a sixth exercised daily and only a quarter between three and six times a week.

Mr Caines added: ‘Despite the push to encourage more consumers to eat their “five a day”, very few Brits are adhering to the guidelines and even more incorrectly think that they are.’

HOW TO CHANGE YOUR MINDSET TO COPE WITH STRESS

‘Stress’ is nothing new and in fact our body’s stress response is beneficial to us as it keeps us alert in times of danger.

This physiological response to stress is the same now as it was when our ancestors were hunting and gathering.

Back then, the ‘fight or flight’ response to stress was very important because when faced danger (say, a predatory animal like a lion), we needed our bodies to be as strong as possible to either run or counter-attack.

In this sense, stress is a good thing – it has helped us survive as a species. 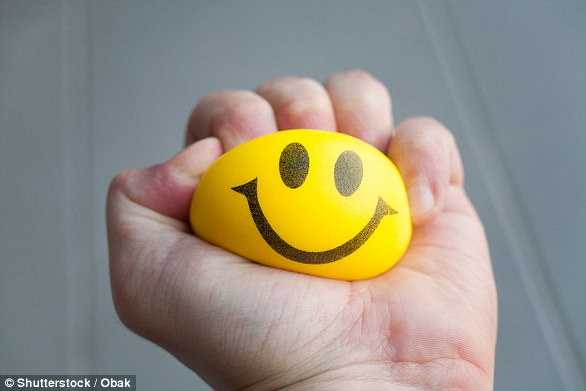 The problem we have now is this same cascade is triggered when we are faced with a difficult situation at work or needy family member – and if you think about it, we can come across such ‘stresses’ many times a day.

If we don’t cope with these stresses well, our bodies don’t get the opportunity reset themselves physiologically. This is why constant stress that pushes us beyond our limits can be bad for our health.

Researchers at the University of Mannheim in Germany found that changing your stress ‘mindset’ can help people benefit, rather than be harmed, by workplace stress.

This research shows us how important it is to take a proactive approach to demanding situations. This can be done in all areas of life, not just work.