Snowflakes AND elephants? A Viking sailing safari along Africa’s shores on a ship with a snow grotto

Standing in a swimsuit, barefoot on the frozen ground, I watched as snowflakes fell around me in the snow grotto. Shivering with cold, I warned the masseur that I was going to succumb to hypothermia.

‘OK,’ he said, guiding me to the steam room, where he had another questionable treat in store for me: while I warmed up in the tropical temperature, he whipped me with birch leaves.

Later, as I lay on a lounger in a bathrobe, wearing an organic lingonberry facemask and having my feet massaged, he explained the benefits of the Nordic spa ritual.

The Liv Nordic spa on board the Viking Sun. It boasts a snow grotto as well as a steam room

‘The snow grotto is the heart of Liv Nordic design,’ he said. ‘It’s the main reason hot and cold bathing came to life. You sit in a sauna and then you run around and roll in the snow. It detoxes your body, boosts circulation and your immune system, rests your mind and nourishes your body and spirit.’

Certainly my body and spirit felt nourished, as I made my way back to my ‘state room’ on Viking Sun. It was my first trip on a cruise ship and I was already hooked: I could not wait to explore the other decks on the 745ft ship as it sailed along Africa’s western shores.

I was one of 930 travellers on a 128-day ‘world cruise’, which departed from Miami and visited five continents, 21 countries and 44 ports, before arriving in London. Viking has just launched its ‘ultimate’ £60,000, 242-day cruise but, sadly, I could only spare the time to travel from Durban to Cape Town, 800 nautical miles, taking six days.

Even so, I managed to visit the Tala Private Game Reserve, in the hills outside Durban (giraffes, kudos, hippos and zebra) and Port Elizabeth’s Addo Elephant National Park, the only park to include Africa’s ‘Big Seven’ (elephant, rhinoceros, lion, buffalo, leopard, whale and great white shark – although I’m mystified where the shark was). 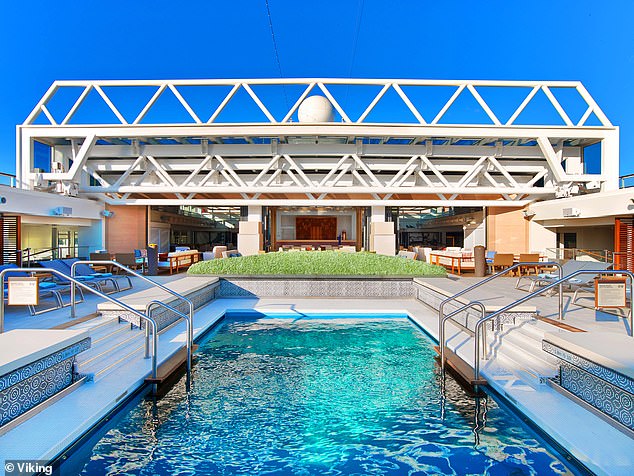 The pool on board the Viking Sun, which has a retractable roof overhead 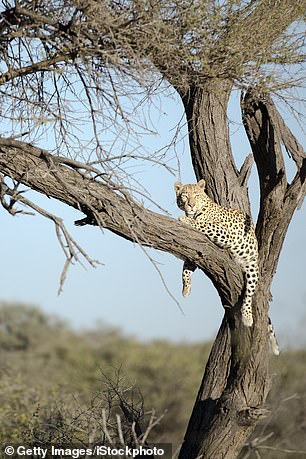 A lazy leopard rests in a tree. They can be spotted in Port Elizabeth’s Addo Elephant National Park, the only park to include Africa’s ‘Big Seven’

We also visited the Museum of East London, which has the accolade of owning the world’s only dodo egg. The scenery was stunning: we saw dolphins leaving Durban, penguins at Port Elizabeth and seals playing in the sunlight as we drew into Cape Town. But, as a fan of all things Scandi, it was the ship that caught my imagination.

Not only was the decor tasteful with clean lines, light wood and colourful woven textiles but, as well as the spa, there was a swimming pool with a retractable roof and an infinity pool.

However, it is not just the design that will appeal to fans of Nordic noir (who can forget Sofie Grabol playing Sarah Lund in The Killing?) or Scandi chic (think the Duchess of Cambridge in Malene Birger).

Viking Sun has an art collection that rivals many galleries: you can wander around the ship wearing headphones, listening to behind-the-scenes stories from artists, designers and curators on an app.

Not only does it have eight lithographs and woodcuts by the father of Expressionism, Edvard Munch, but it has an exclusive partnership with Oslo’s Munch Museum, which gives it digital rights to its entire collection – it flashes up daily pictures by Norway’s answer to Van Gogh on a giant screen while a pianist plays Edvard Grieg.

There are also a number of works by Norwegian abstract artist Jakob Weidemann, who inspired award-winning garden designer Paul Hervey-Brookes, a gold-medal winner at this year’s Chelsea Flower Show.

‘He is an inspirational character,’ said Paul who has been on two Viking cruises – a river trip from Nuremberg to Budapest and an ocean cruise from Ho Chi Minh to Hong Kong. 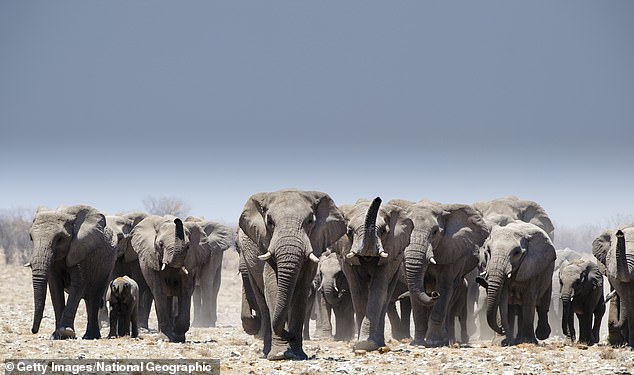 Nordic safari: On the cruise, passengers can go from watching a herd of elephants to taking a dip in the pool

‘He was a teenager when Norway was occupied, lost an eye setting mines and wanted to be a painter. He couldn’t really paint – his early work is dreadful – but he developed this most amazing post-impressionistic abstract style which is now highly sought-after. Just amazing.’

Paul was also inspired by Swedish ceramicist Anette Krogstad, whose ‘amazing plates’ are displayed on the boat, glazing the stepping stones in his garden, which is reminiscent of a water garden, in the same shade of blue.

There was even a Viking Heritage Museum on the ship where you could check whether you have Viking ancestry.

Apparently, a telltale sign is a genetic condition known as Dupuytren’s Contracture, in which ‘thick tissue forms under the skin of the palm, causing some of the fingers to curl inward towards the palm’. I was somewhat relieved to discover I didn’t fit the mould.

I popped into the shop, for a souvenir of my trip. Again, it had a Nordic flavour, with jewellery by Georg Jensen, Helle Hansen sweatshirts, Glerups (felt wool slippers), Tometbod (Swedish gnomes) and Christmas tree decorations. Sadly, there were no Sarah Lund jumpers.

For most people, the sign of a good holiday is the cuisine, and the choice here is never-ending.

Finally, I settled down for a drink. Wine and beer are included in every meal but Viking offers a Silver Spirits package for those who want liquors and cocktails. One bottle caught my eye: aquavit, which is ‘distilled in Norway, matured at sea’.

Legend has it that the spirit is best-matured in casks amid the motion and temperature changes of a sea voyage. Viking Sun has six casks of its very own aquavit, which has circumnavigated the globe. Now that’s what I call a drink.

The next Viking World Wonders Cruise sets sail from Los Angeles to London on January 4. Fares start from £32,990pp. There are also a range of Scandinavian cruises including Viking Shores & Fjords from £2,790pp; Scandinavia & the Kiel Canal from £2,990pp; and Majestic Fjords & Vibrant Cities from £3,340pp. Visit vikingcruises.co.uk.