An SNP MP who flouted coronavirus self-isolation rules by travelling hundreds of miles across Britain to attend the Commons while ill with Covid-19 was branded ‘completely reckless’ today as she faced a police investigation.

Scotland Yard confirmed it was looking into Margaret Ferrier’s admission last night that she travelled 400 miles from Glasgow to London and then back again while suffering with Covid-19.

Speaker Sir Lindsay Hoyle lashed out at her astonishing actions as she faces calls from her own party leader to quit as MP for Rutherglen and Hamilton West.

She travelled by train to London from Scotland last Monday while awaiting the results of a Covid test, and then travelled back the following day after being told the test was positive.

Sir Lindsay told Sky News he learned the 60-year-old had coronavirus while in the Speaker’s Chair in the House of Commons at around 4pm on Wednesday.

He said: ‘Obviously this is completely reckless behaviour for a Member of Parliament – to put staff and fellow MPs at risk is not acceptable.’

He added: ‘What made it worse was only being told on Wednesday on something that people knew about on Monday – well the MP themselves knew about it on Monday.’

He said the reaction was immediate and ‘within 20 minutes we were in full swing on what we needed to do to ensure the safety and security of staff and members’.

He also voiced anger than some in the SNP knew of the situation long before he was informed.

The Metropolitan Police confirmed tonight that it was investigating the journeys along with British Transport Police over potential breaches of the Health Protection Regulations 2020.

The First Minister Nicola Sturgeon urged Margaret Ferrier to ‘do the right thing’ as she faced universal condemnation for her ‘utterly indefensible’ behaviour .

Ms Sturgeon said she had made it ‘crystal clear’ to Ms Ferrier that she must resign. ‘I’ve spoken to Margaret Ferrier and made clear my view that she should step down as an MP,’ she said.

‘I did so with a heavy heart – she is a friend & colleague – but her actions were dangerous & indefensible. I have no power to force an MP to resign but I hope she will do the right thing.’ 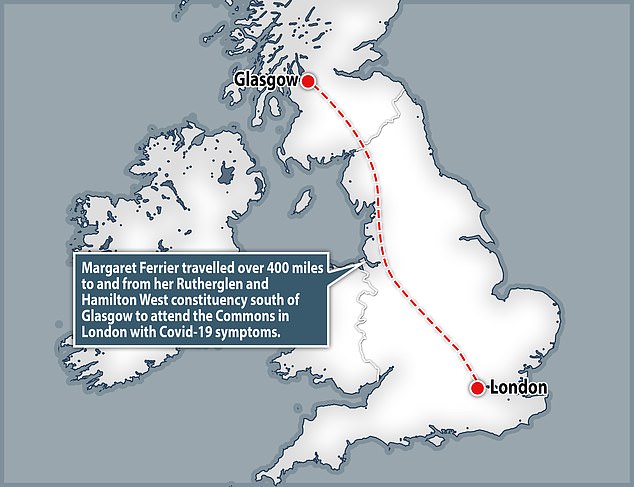 ‘I apologise unreservedly for breaching Covid-19 restrictions by travelling this week when I shouldn’t have. There is no excuse for my actions.

DUP MP Jim Shannon revealed this afternoon that he dined with Ms Ferrier at Parliament on Monday night and was told to self-isolate, but had since tested negative.

Earlier, the SNP’s Westminster chief Ian Blackford, who has already stripped her of the whip, said this morning that she must ‘reflect on her position’. ‘I think it is obvious what she needs to do,’ he told BBC Breakfast.

The Commons said one person who had come into contact with Ms Ferrier had been told to self-isolate, with investigations into who else might be at risk set to continue. Extra cleaning precautions have also been taken – although the damage might already have been done.

The Rutherglen and Hamilton West MP said she took a test on Saturday afternoon after experiencing ‘mild symptoms’, meaning she should have self-isolated, before travelling by train to London on Monday having felt better.

Labour suggested the party covered up knowledge of Margaret Ferrier’s actions after it emerged they knew of her diagnosis a day before she disclosed it on Thursday evening.

She spoke in the coronavirus debate in the House of Commons on Monday and, by her account, tested positive for Covid-19 that evening. She did not make clear whether she received the result before or after she spoke.

In a statement, she said she travelled home to Glasgow on Tuesday, where she has been self-isolating ever since.

‘Despite feeling well, I should have self-isolated while waiting for my test result, and I deeply regret my actions,’ she said.

Ms Sturgeon was repeatedly grilled on the situation at her daily briefing this afternoon.

But she swiped back by comparing her response to that of Boris Johnson when his chief aide Dominic Cummings was accused of breaching rules.

‘Trust me, it’s one of the easiest things in the world in politics to call for tough consequences when one of your opponents breaks the rules, that’s not hard for any of us,’ she said.

‘The litmus test, though, is whether you’re prepared to do the same when it’s one of your own breaking the rules.

The Commons Speaker today vented fury at the delay in informing him about Margaret Ferrier’s ‘reckless’ actions.

Sir Lindsay told Sky News he only learned Ms Ferrier had coronavirus while in the Chair at around 4pm on Wednesday.

He said the reaction was immediate and ‘within 20 minutes we were in full swing on what we needed to do to ensure the safety and security of staff and members’.

He said: ‘Obviously this is completely reckless behaviour for a Member of Parliament – to put staff and fellow MPs at risk is not acceptable.’

He added: ‘What made it worse was only being told on Wednesday on something that people knew about on Monday – well the MP themselves knew about it on Monday.’

‘And in these abnormal times when everybody has been asked to do difficult things, I think that is more important than ever.

‘That’s why the SNP whip has been withdrawn from Margaret, and that is the most serious sanction a party can impose on an elected representative.

‘I’ve also spoken to her directly and made crystal clear to her that I think she should now resign as an MP.’

The DUP issued a statement saying that Strangford MP Jim Shannon was seated at the same dining table as Ms Ferrier on Monday night.

‘On Wednesday evening, the Speaker’s Office alerted Mr Shannon that he had been identified as a close contact of an individual who had tested positive for Covid-19.

‘Upon receiving this news, Mr Shannon immediately self-isolated and on Thursday afternoon he received a negative Covid-19 test result.

‘Mr Shannon sought and at all times has followed the advice of Public Health England and the House of Commons’ Covid-19 team in dealing with every element of this incident.

‘As a precaution, Mr Shannon is self-isolating at home.’

The SNP gained the Rutherglen and Hamilton West seat from Labour in the 2019 general election, when Ms Ferrier won with a majority of 5,230.

But her colleagues turned on her overnight after it emerged she had flouted the rules.

David Linden, the SNP MP for the Glasgow East constituency neighbouring Ms Ferrier’s, has called for her to go.

He told BBC Question Time her behaviour is ‘utterly inexcusable’, adding: ‘I don’t think her position is tenable and she should resign.’ 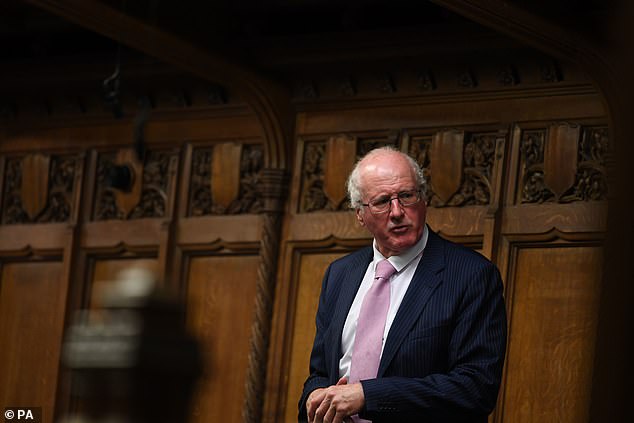 The DUP issued a statement saying that Strangford MP Jim Shannon was seated at the same dining table as Ms Ferrier on Monday night, but has since tested negative for Covid 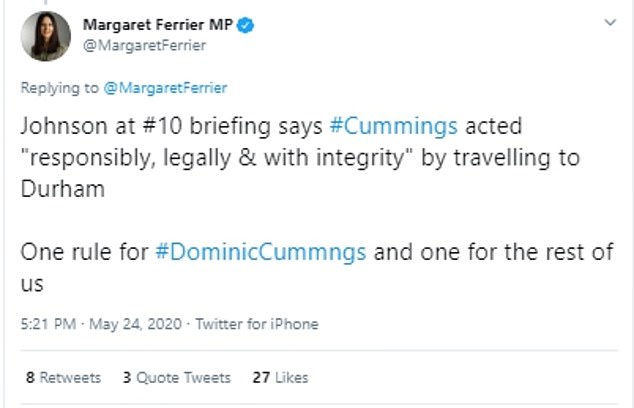 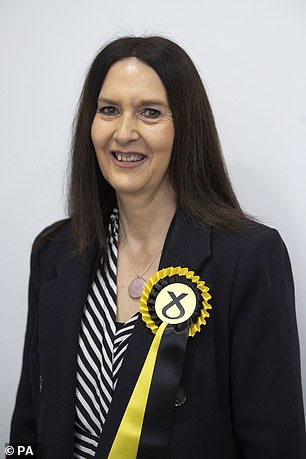 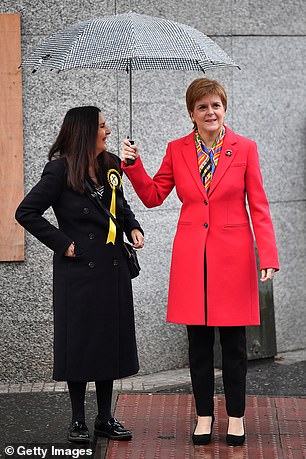 Margaret Ferrier: Comeback MP who won her old seat off Labour in 2019 – only to be suspended less than a year later for Covid-19 train journey

Margaret Ferrier, 60, is MP for Rutherglen and Hamilton West, in central Scotland.

As an SNP candidate, she won the seat in 2015 in the party’s landslide on the back of the 2014 Independence referendum.

She was almost instantly made a party spokesperson on Scotland and was elected to the Commons Scottish Affairs Committee.

However she was narrowly beaten by Labour in the 2017 General Election.

But in last year’s poll she retook the seat. Until tonight, she was the SNP’s spokesperson on manufacturing.

Ms Ferrier was born in Glasgow but lived in Spain for several years when she was a child.

In an interview with the Daily Record, she said she had been a member of Scottish Labour in her youth.

Ms Blackman said that while Ms Ferrier is an ‘unparalleled’ campaigner for the party, she must resign.

‘Margaret’s actions cannot be overlooked,’ she added in a tweet.

‘We now know that the SNP were informed on Wednesday that Margaret Ferrier had been tested, after she had already travelled back to Scotland from London by public transport while infected with the virus,’ he said.

‘These actions not only broke the law, they will have put lives at risk.

‘We must hear from Nicola Sturgeon and Ian Blackford about exactly when they knew and why they kept this information secret from the public for hours or maybe even days.’

The Labour MP tweeted: ‘SNP in chaos & appear to be covering up serious breach of public health laws.

‘FM & Blackford must hold press conference tomorrow am to answer questions about what they did & didn’t know.’

An SNP spokeswoman insisted the party did not know until Thursday that Ms Ferrier had taken a test prior to travelling to London.

‘Ms Ferrier informed the SNP on Wednesday, when she was in Glasgow, that she had tested positive,’ she said.

‘The SNP’s chief whip immediately informed Parliament authorities. The SNP only became aware on Thursday that Ms Ferrier had been tested prior to travelling to London and had travelled back to Glasgow, knowing that she had a positive result.’

On Monday, Ms Ferrier gave a four-minute speech in the Commons from 7.15pm and focused on the ‘economic health’ of her constituents, calling for greater financial support.

A Police Scotland spokesman said officers are liaising with colleagues in the Metropolitan Police.