So THAT’s why French women look so good! And the simple kitchen beauty secret can transform you, too

Ever thought of putting vinegar on your face instead of your chips? You might not have, but French women are no stranger to a glow-getting elixir known as ‘beauty vinegar’.

While it might not sound appealing to anglophone ears, vinaigre de toilette harnesses the exfoliating properties of vinegar, or acetic acid to give it its technical term, to brighten and tone the skin after cleansing.

French beauty brand Roger & Gallet has revived its 19th-century beauty vinegar, adored among the royal courts of Europe, and updated it with modern botanical ingredients.

Victoria Woodhall tested out a selection of the latest beauty vinegars, including Organic Apple Cider Vinegar by Higher Nature (pictured)

‘Now the beauty industry has caught on to this versatile ingredient and it is popping up in toners, due to its cleansing and astringent nature, as well as its skin pH balancing benefits.’

It’s having a moment, thanks to the rise of exfoliating acid toners, seen as a gentler alternative to harsh grainy facial scrubs. ‘Apple cider vinegar is a natural alpha hydroxy acid (AHA), which unsticks the glue that holds dead skin cells to the surface of your skin to reveal fresh dewy skin beneath. This leaves your face soft and smooth, and more receptive to your subsequent skincare,’ says expert Jane Scrivner.

Will any old vinegar do? Yes — as long as it’s sufficiently diluted (it is an acid, after all), it can be used to exfoliate, says pharmacist Shabir Daya, co-founder of victoriahealth.com.

And ACV has extra benefits because it contains live bacteria. ‘Unlike other exfoliating acids, which can sometimes cause inflammation, ACV displays powerful anti-inflammatory benefits. It’s also thought to display antimicrobial properties. This makes it very useful in the treatment of acne,’ he says. But whichever beauty vinegar you pick, there’s no getting over one fact, says Imelda Burke: ‘No amount of dilutions get rid of that distinctive smell completely.’ So could you bear the whiff on your skin? We put five of the latest beauty vinegars to the test.

WHAT IS IT? Victoria Beckham apparently keeps a pot of this as a blood-sugar balancing digestive tonic. But you can use it diluted on a cotton pad as a ‘toner with benefits’ too. It takes away the dead skin cells, but unlike filtered vinegars it has ‘the Mother’ — the live bacteria culture, which is anti-inflammatory and antibacterial. It’s suitable for most skin, says Shabir Daya of victoriahealth.com, ‘but I wouldn’t recommend it for sensitive and reactive types.’

THE VERDICT? It stung a little and felt ‘squeaky’, perhaps because it has none of the added soothing ingredients of a beauty formula. If simplicity and cost are factors — and smell isn’t — this is worth persevering with until you find the right dilution. A much weaker solution suited me better. Other homecare recipes suggest mixing in honey or rose water.7/10 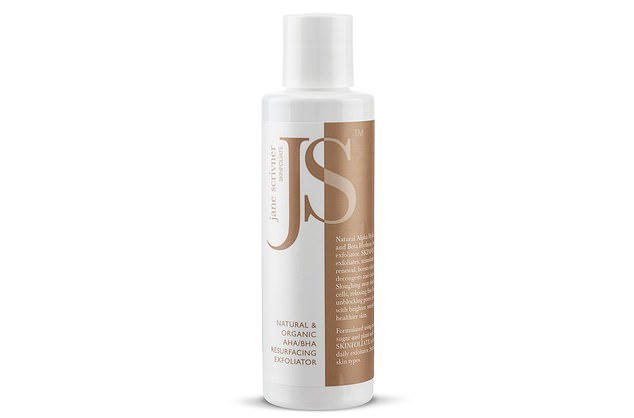 Victoria was most impressed with Skinfoliate by Jane Scrivner (pictured), for it’s ability to brighten skin in a natural way

WHAT IS IT? Aspall’s Raw Organic Cyder Vinegar is the main ingredient of this daily exfoliator, which also works to protect the skin’s acid mantle, the fine acidic film on top of the skin that is its first line of defence against external aggressors. It’s also full of other powerhouse natural acids such as glycolic, lactic and salicylic acids which boost its brightening benefits. It’s recommended that you start by using it once every other day and build up to twice a day.

THE VERDICT: The results are worth the whiff of cider vinegar; it really does brighten in a very natural way and has all the anti-inflammatory powers of raw ACV. My skin has stayed clear in the six months I’ve used it.9/10 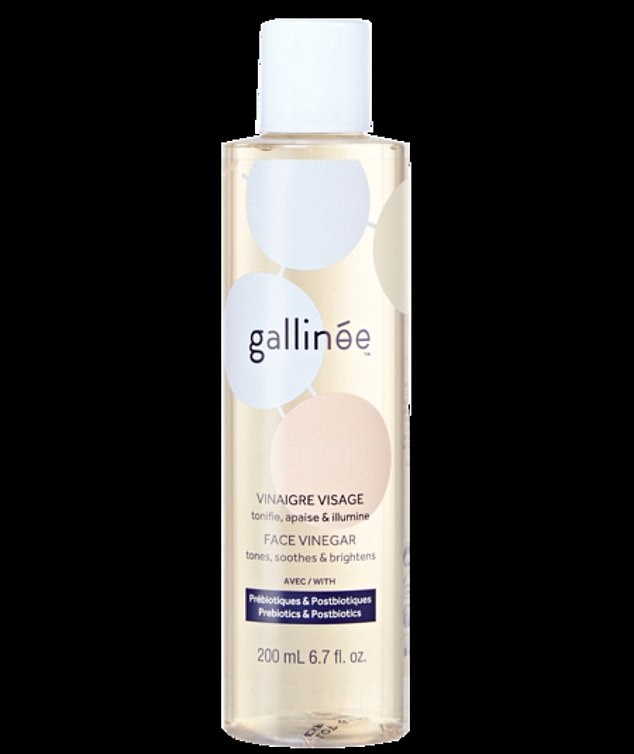 Victoria says it was difficult to gauge how effective the bacteria in Gallinee Face Vinegar (pictured) was, but her skin felt soft and cared for after use

WHAT IS IT? A twice-daily leave-on toner made with hibiscus vinegar extracted from the flower. It claims to dislodge dirt and unhealthy bacteria, provide anti-oxidant protection against ageing and, as an alpha hydroxy acid, stimulates cell renewal for a refined skin finish. There are added prebiotics to feed beneficial skin bacteria and ‘postbiotics’ — the waste products of beneficial bacteria that enhance the skin’s microbiome.

THE VERDICT: Pleasant and cooling, this calming toner is gentle enough to be used twice a day to keep on top of skin build up. Vinegar is midway down the ingredients list, which might explain why I couldn’t smell it. As for the bacteria, it’s impossible to gauge how effective they are, but my skin felt soft and cared for.8/10 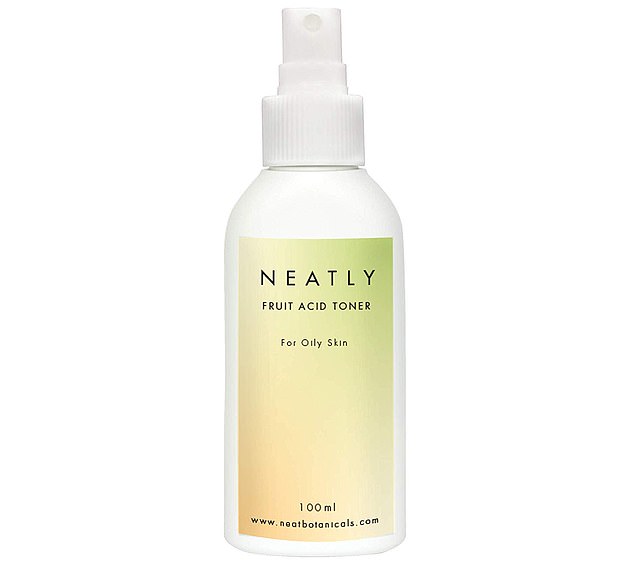 WHAT IS IT? A toner spray containing a high concentration of witch hazel, an astringent often used to target oily or acne-prone skin. It also contains a good dose of organic apple cider vinegar with ‘the Mother’, which is the live bacteria colony that delivers those anti-bacterial and anti-inflammatory benefits.

THE VERDICT: Unlike so many modern beauty products, you don’t need a degree in chemistry to understand what’s in this — alongside vinegar, natural recognisable ingredients such as rose water, glycerine and aloe vera, lavender and lemon are the name of the game.

My skin felt slightly drier with this product, but nevertheless refreshed. It’s best squirted on to a cotton pad, otherwise it’s like being sneezed on by a salad. If you have oily or spot-prone skin and don’t mind the slight whiff, this one is for you.8/10 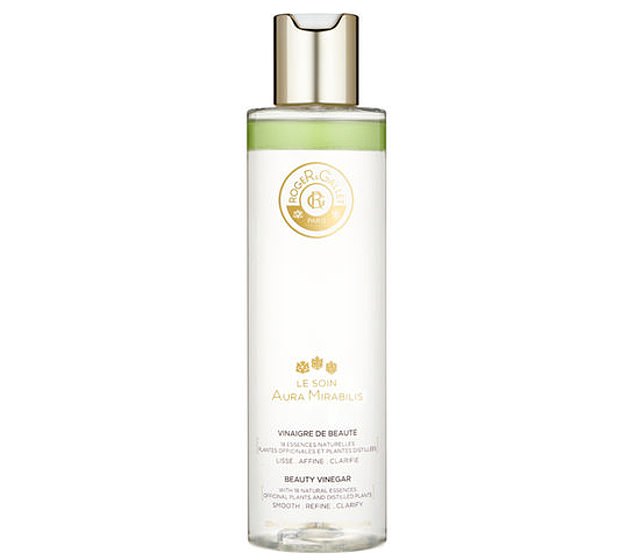 WHAT IS IT? A revamp of Roger & Gallet’s 1862 beauty vinegar, which was itself based on a medieval recipe for ‘miracle water’, created by monks as a cure-all. This new formula contains apple fruit vinegar and 18 botanicals, selected for their healing, detoxifying and restorative benefits, plus a little oil.

THE VERDICT: Just like a vinaigrette, you need to shake the bottle to mix the oil and water, but what you get is a biphase cleansing action that mops up any leftover cleanser or make-up. You can’t smell the apple vinegar, which makes me wonder how much is in it. The second ingredient after water is alcohol, which is too drying and stripping on my skin.6/10