The number of times a family moves home has halved since the financial crisis, research suggests.

Soaring house prices and high taxes have made extensions more attractive to many than moving to a larger home, according to estate agent Savills.

It said that before the financial crisis a decade ago, homeowners would move an average of 3.6 times after buying their first house.

However, the slower pace of buying today suggests that they will now move just 1.8 times, the research for the BBC found.

Soaring house prices and high taxes have made extensions more attractive to many than moving to a larger home, according to estate agent Savills

Key reasons include high prices, difficulty getting a mortgage and older people staying put in large houses – meaning they do not come on to the market. Massive stamp duty costs may also play a role.

Lucian Cook, of Savills, said: ‘Those not trading up are the forgotten people of the housing market. We’ve concentrated on first-time buyers.

‘They get the concessions and all the focus has been on getting people on to the housing ladder.’

London has long had a problem, with property on the second rung of the ladder being too expensive for buyers who are trying to move up from their first home.

But Savills said it was a growing issue elsewhere as well – both in cities such as Manchester, where prices have surged, and in areas where there has been little change because families have made almost no profit on the property they are in. 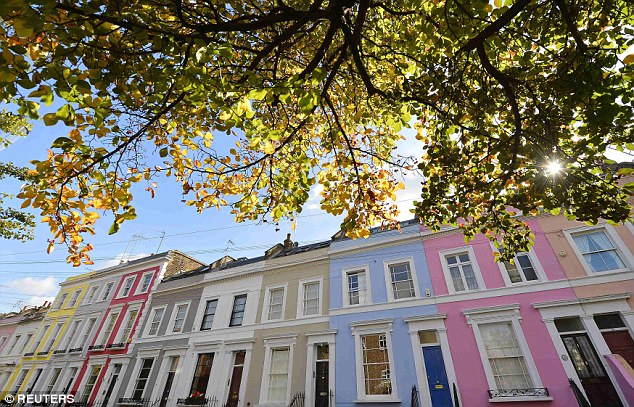 The number of times a family moves home has halved since the financial crisis, research suggests

Savills said there were areas such as Basingstoke in Hampshire, south Norfolk, Swindon, Bracknell in Berkshire and Aylesbury in Buckinghamshire, where the market was neither surging out of control nor too sluggish to move.

Here, properties changed ownership once a decade on average and it was still possible to move up.

At the other end of the scale was sparsely populated Pembrokeshire in south-west Wales – possibly due to a lack of houses to move into – and the London borough of Harrow, where homes tended to switch owner once every 19 years.

Brent in London, Wolverhampton and Anglesey in North Wales were next slowest, with properties taking 18 years to change hands.

A lack of moves would also make it more difficult for young people to get their first home because fewer would come on to the market.

A report by the Institute for Fiscal Studies think-tank last month revealed only one in four young middle-class people now owned their home – down from two-thirds 20 years ago, amid concerns over the housing shortage.

Tory MP Nick Boles warned that more must be done.

He said: ‘The collapse in home ownership among people in their twenties and thirties earning average incomes is a social and economic disaster. Margaret Thatcher’s vision of a property-owning democracy is under threat.

‘It will turn into a political disaster for the Conservative Party if the Government does not match its ambitious rhetoric with bold steps to increase house building.’