A toxic mix of high inflation, rising interest rates and feeble economic output could nudge Britain into a severe recession next year.

Markets await the next Bank of England Monetary Policy Committee meeting next week, which is anticipated to result in a 75 basis point hike in the base rate as longer term expectations for interest rates fall amid calming waters for UK Government bonds.

But experts warn the alarming rise in mortgage rates in recent weeks has worsened the outlook for recession, with the potential for a housing crash exacerbating the economic woes facing Britain.

A sharp fall in gilt yields since the initial turmoil of September’s mini-Budget may provide some respite, with the Bank of England signalling interest rates may peak far below market expectations – but they still remain well above levels seen in the summer.

In the wake of Chancellor Jeremy Hunt’s screeching U-turn on much of the mini-budget, the average fixed rate for two-year and five-year fixed mortgage across all loan-to-values climbed to 6.53 and 6.36 per cent, according to Moneyfacts.

The last time the average two-year fixed rate mortgage hit 6.4 per cent or more was back in August 2008 during the fallout from the global financial crash, when it reached 6.94 per cent.

The BoE recently warned that 800,000 households will be unable to pay their mortgages next year, the highest since the 2008 financial crisis, as they struggle to deal with rising rates. Just a year ago, the average mortgage rate was 2.35 per cent.

Feeding this rise, markets were forecasting the base rate to go as high as 5.25 per cent next year before BoE Deputy Governor Ben Broadbent stepped in to calm expectations.

‘If the bank rate really were to reach 5.25 per cent… the cumulative impact on GDP of the entire hiking cycle would be just under 5 cent – of which only around one quarter has already come through,’ he said in a speech in London.

‘It would imply a pretty material hit to demand over the next couple of years.’

Markets now expect the BoE to hike rates by 75bps to 3 per cent at its 3 November MPC meeting, having previously expected a 100bps rise, as it attempts to bring inflation down from its 40-year high of 10.1 per cent.

The BoE’s hiking cycle is now anticipated to peak below 5 per cent. 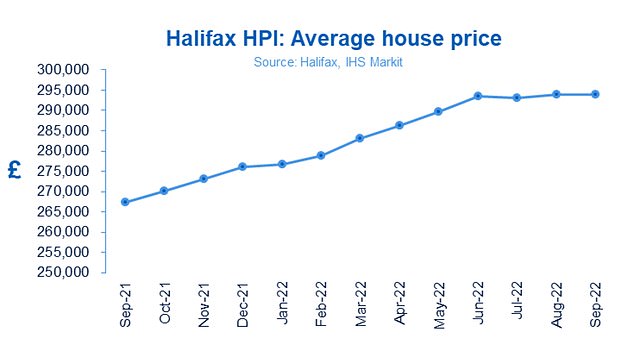 Slowing growth: The average house price in the UK dipped in September to £293,835, according to the latest Halifax index, but prices have remained relatively flat since summer

While this move has softened risk, European economist at T. Rowe Price Tomasz Wieladek said a house price crash and a recession were now ‘inevitable’.

‘A BoE policy rate at 4 per cent implies a two-year mortgage rate of 5 to 6 per cent. Even before this rapid rise in mortgage rates became a reality, forward looking indicators implied a significant slowdown in house price growth.’

It comes as consumer confidence, which is also a key indicator of house purchasing demand, plummeted to record lows in the third quarter of 2020, according to the Deloitte Consumer Tracker. Meanwhile, house price growth is slowing.

Wieladek added: ‘The large rise in mortgage rates, together with the decline in real disposable income, will exacerbate the trends in the housing market.’ 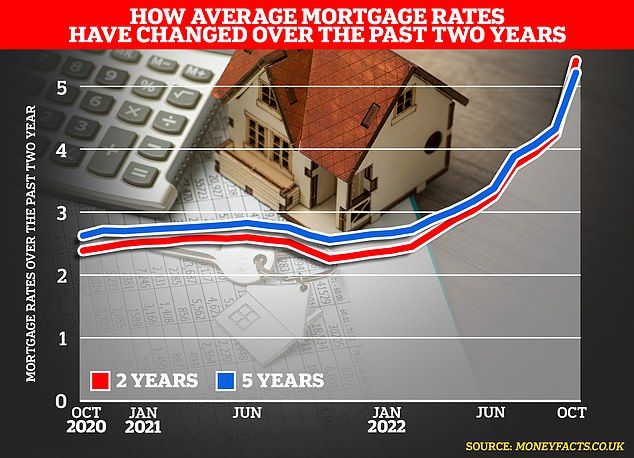 Rate rises: Fixed mortgage rates have been increasing since the Bank of England began increasing its base rate in late 2021, but recent economic turbulence has hastened the rises

In its most recent quarterly monetary policy report in August, the Bank of England forecast that the UK is to enter five consecutive quarters of recession beginning in October.

At the time, the BoE said GDP will decline by nearly 1 per cent in the fourth quarter of this year.

But while longer term inflation expectations have softened in the time since the report, other issues have intensified.

The S&P/CIPS Composite PMI index, published on Monday, shows a sharp retraction in business activity in October to a 21-month low.

Thomas Pugh, economist at RSM UK, said the reading ‘reinforces other evidence that the economy is in a recession’.

He added: ‘We expect the recession to last until Q3 2023 and result in a drop in GDP of around 2 per cent.’

City forecasts compiled by the Treasury in October, but before more recent data was published, show an average full-year 2023 GDP expectation for a decline of just 0.3 per cent.

Meanwhile, forecasters expect year-on-year consumer price inflation and the BoE base rate to be up 4.7 and 4.3 per cent respectively in the fourth quarter of 2023.

But heading into 2023, co-chief investment officer at Rathbone Investment Management Ed Smith said the level at which mortgage rates level out will be ‘a particular cause for concern’.

He added: ‘It is a reason why the UK may have a deeper recession than most other countries.

‘There’s about £1.6trillion worth of mortgage debt out there – if even about 40 per cent of that has to refinance over the next year… and  it is going to be paying 300bps more than it was before, that’s about one percentage point off GDP that is going to come out of household consumption elsewhere.

‘And that’s before you have the knock-on wealth effects and confidence effects from falling housing prices, for example. So this could be pretty significant.

‘If mortgage rates are going to settle around 5 or 6 per cent, that’s going to be a really significant hit to consumption next year.

‘If they settle at 3 or 4 per cent, it’s going to be negative, but not of the magnitude [of 5-6 per cent], which looks like a really deep recession.’