Councils in England are being swamped with 5,100 new requests for adult social care every day, figures have revealed.

Local authorities last year spent £17.9billion on caring for adults – £402million (2.3 per cent) more than the year before.

While the total number of people relying on long-term care is going down, 1.3million people contacted their local council for help in 2017-18.

Experts say the system is at ‘breaking point’ and the number of people receiving care is only going down because councils are rationing it.

They warn all councils are facing financial pressure to look after their residents and the problem will only get worse unless there are big investments by the Government.

Hampshire has the biggest demand for care, with residents making 68,920 requests for help last year, followed by Suffolk, Kent and Derbyshire. 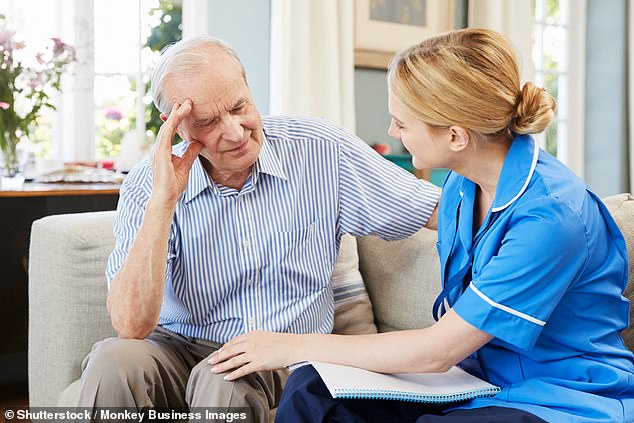 Experts say the care system is at ‘breaking point’ as councils are dealing with 5,100 requests for adult social care every day, and spent £17.9bn on the sector last year

The NHS figures come in the middle of a recruitment crisis in the care sector, an ageing UK population, and overcrowding in A&E departments and hospitals.

‘Councils in England will have seen their core funding from central government reduced by £16 billion between 2010 and 2020.

‘Over recent years, councils have protected adult social care relative to other services.

‘The Government needs to address immediate funding pressures in its upcoming Budget and ensure its forthcoming Green Paper will deliver reforms to future-proof the long term sustainability of adult social care.’

Nearly three quarters of people needing care are aged over 65, but the number of people aged between 18 and 64 who asked for help rose by 2.6 per cent last year.

Most of the money – £14billion, or 77.9 per cent – was spent on long term care in residential or nursing homes or in the community.

Only one in five of the requests were related to someone being released from hospital – 77.1 per cent came from people living in the community.

‘People may be surprised that the numbers receiving care are falling when we know need is high and rising,’ said Caroline Abrahams, charity director at Age UK.

‘But this is because there is nowhere near enough money in the system so care is increasingly being rationed.

‘Every local council is struggling to some extent because of lack of care funding and care staff but some places are harder hit than others, meaning older people face a real lottery when it comes to getting care.

‘Unless the Government pumps a lot more funding into care in the budget next week the picture will only get worse and more older people will lose out.’

The figures were released in the NHS report, Adult Social Care Activity and Finance, England 2017-18, which breaks the requests and spending down area by area.

In September this year it was revealed that eight per cent of care jobs are empty, with at least 110,000 new workers needed to meet the need.

And Skills for Care, a training charity, estimates an extra 650,000 jobs will need to be created in the next 17 years to be able to meet rising demand.

Experts also warned in medical journal The Lancet in August that the number of elderly people needing 24-hour care will rise to more than a million by 2038.

The pressured social care system also spills out into the health service in general.

A report by MPs in the Public Accounts Committee in June revealed a quarter of emergency A&E patients are there because they couldn’t get care or help from a GP.

Their illnesses could have been avoided had they been properly looked after by GPs, district nursing services or the social care system, MPs said.

In response to today’s figures, a Department for Health and Social Care spokesperson said: ‘We recognise people are living longer, and with more complex needs.

‘That’s why we have provided local authorities access to up to £9.64billion in dedicated adult social care funding over the last three years, including £240million extra funding for local authorities to reduce pressure on the NHS this winter.

‘Our green paper due later in the year will set out our plans to reform the social care system to make it sustainable for the future.’