Social media firms could be fined over £1billion in crackdown

Social media firms could be fined over £1billion if they fail to take down terror material under a new internet crackdown, ministers today announced.

The hefty fines can also be dished out to firms which fail to ensure young children are not on their sites and or fail to tackle bullying and harassment.

Culture Secretary Matt Hancock today said he is determined to tackle the ‘Wild West’ of online.

And he revealed he was driven to launch the new crackdown after 10 out of 14 internet firms snubbed his invite to discuss how to tackle the issued.

Speaking on the Andrew Marr show today, Mr Hancock said that under new laws working their way through Parliament firms can be fined 4 per cent of their global turnover.

He said: ‘In the case of some of the biggest companies that is over £1billion.’

He added: ‘I hope we get to  aposition whre everybody has to have their age verified before they are allowed on these  sites.’

However, quizzed over how many children would have to be on the site for it to be slapped with the maximum fine, he was unable to give a figure.

Mr Hancock said he held a meeting to talk with tech giants about how to collaborate to tackle the scourge of abuse and terror material online.

But only four firms turned up – fuelling his desire to impose fresh laws to force them to act.

He said: ‘That is one the reasons we are legislating. The fact only four companies turned up out of the 14 invited gave me a big impetus to drive these proposals for legislation through.’ 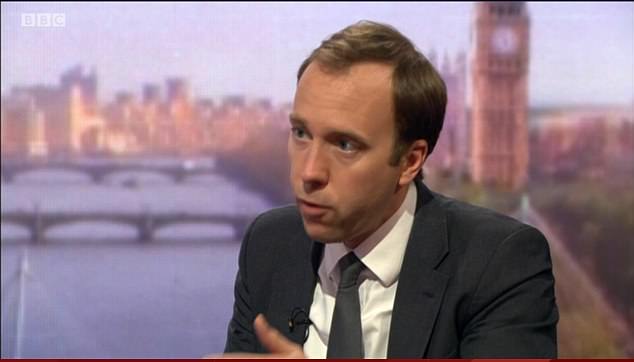 In a separate statement, he said: ‘Digital technology is overwhelmingly a force for good across the world and we must always champion innovation and change for the better.

‘At the same time I have been clear that we have to address the wild west elements of the internet through legislation, in a way that supports innovation.

‘We strongly support technology companies to start up and grow, and we want to work with them to keep our citizens safe.

‘People increasingly live their lives through online platforms so it’s more important than ever that people are safe and parents can have confidence they can keep their children from harm.

‘The measures we’re taking forward today will help make sure children are protected online and balance the need for safety with the great freedoms the internet brings just as we have to strike this balance offline.’