‘Stop! He has a family’: Social media reacts to outrageous piece of skill from Cristiano Ronaldo on Germany’s Antonio Rudiger after clipping the ball over the defender’s head and passing it to his team-mate with a no-look flick

Cristiano Ronaldo produced an outrageous piece of skill to embarrass Germany’s Antonio Rudiger in their Euro 2020 clash in Munich.

But while his goal was a simple tap in, his first-half piece of skill was cheeky and showed brilliant control. 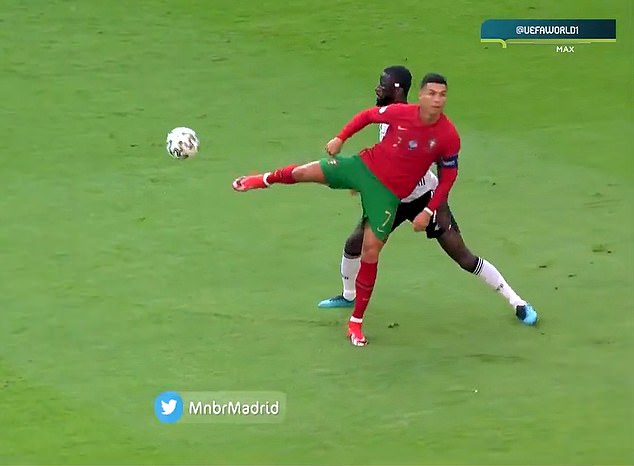 As Rudiger stuck his boot out to try and win the ball off Ronaldo, the Portuguese superstar coolly chipped it over the head of the Chelsea defender.

That wasn’t it though, as Ronaldo had time as the ball was dropping to stick his arms out and pretend he was going to catch it.

He then quickly pulled his arms away and did a no-look back-flick to a team-mate, just as Rudiger had regained his composure and pulled back the Portuguese star.

The cheek of the moment got many on social media talking, with one user saying the skill proved that Ronaldo was the ‘goat for a reason’ while another added that it was ‘unreal’.

The one part of the motion which got people amazed the most was the 36-year-old pretending to catch the ball as it dropped down over Rudiger’s head.

AFCbrazy commented: ‘He pretended to catch it mid air as well this guy’s mocking it,’ while @JY4DP added ‘The thing with his hands was just rude’.

Kingjameshowe praised the former Manchester United star saying: ‘I maybe a Manchester City fan but that bit of skill from Cristiano Ronaldo was fantastic.’

Others made light of Rudiger’s misfortune of being the victim to Ronaldo’s showboating with Andrew Leong commented with laughing emojis: ‘Rudiger being humiliated there.’

Another Twitter user commented: ‘Ronaldo stop! He has a family.’

Ronaldo’s goal against Germany was his third of the tournament and a record 12th for any player who has competed in the European Championship since its inception.

Portugal could not hold on to the lead however as first-half own-goals from Ruben Dias and Raphael Guerriero put the Germans 2-1 up going into the break.

Germany scored two goals after the break through Kai Havertz and Robin Gosens to take a 4-1 lead before Diogo Jota got one back for Portugal. 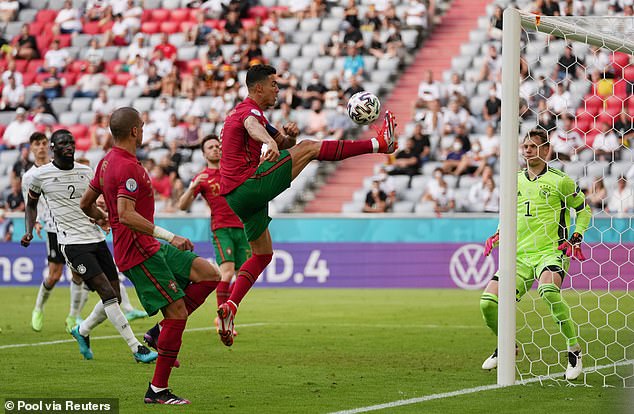