TMZ acquired video footage of the incident in which Greene forcefully hit Poole with a right hand Deontay Wilder would be proud of.

The clip shows Green exchanging words with Poole along the baseline before bumping chests with the latter, who attempted to gently push the veteran forward out of the way as concerned teammates and coaches begin to take notice.

The clip shows Draymond Green exchanging words with Jordan Poole before a chest-to-chest confrontation led Poole to shove Green. Then, things got ugly as Green let a right-hand fly

“I challenge YOU Draymond Green to hit 3 straight jumpers off the dribble” – Jordan Poole probably pic.twitter.com/SAkFLLIxAA

It’s then that the 6-foot-6 Green lunged at 6-foot-4 Poole with a right hand to the face. Some onlookers stepped in while others, including reigning NBA Finals MVP Stephen Curry, stood by and simply watched the skirmish unfold.

Ultimately a throng of six or so bystanders were able to separate the pair. Reasons as to what was said or indeed caused the disagreement is still unknown, but as ever, social media had their theories.

Some figured Poole had insulted Green with a nickname bestowed upon him by NBA great and lovable NBA on TNT analyst, Charles Barkley.

Golden State did not practice today, but do return to the facility tomorrow, and one fan thought Green may have a tougher time than normal getting into Oracle Performance Center, sharing a hilarious clip of Jets-turned-Seahawks safety Jamal Adams getting locked out of the building. 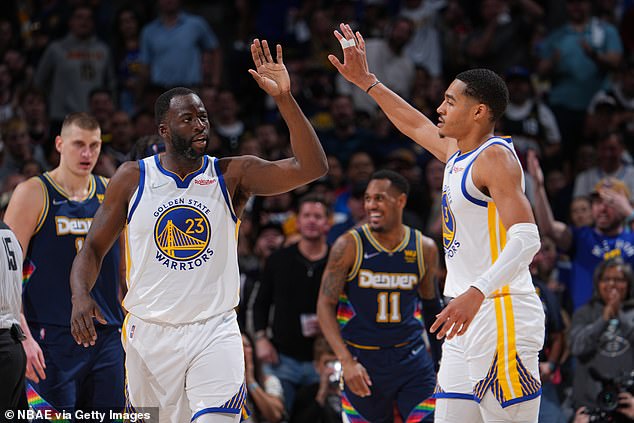 Prior to a clip of the punch arising, Green is said to have expressed remorse, according to Warriors general manager, Bob Myers. ‘Draymond apologized to the team,’ he said Thursday. ‘Jordan was there in the room.’

‘That boy would’ve had to see me until I retired out the NBA,’ Jackson wrote.

Whether it is resolvable is currently unknown. Yet YouTuber-turned-boxer, Jake Paul and NBA star Trae Young had their own thoughts on the situation. ‘Gotta get Draymond Green in the boxing ring,’ Paul wrote.

Meanwhile, Young poked fun, suggesting Green acted as a means of being traded to Los Angeles. ‘Draymond is tryna [sic] get to LA. Damn!’

Although, the feedback on Twitter was not universally supportive or indeed humorous. Many users took great exception to Green’s shocking actions.

Some users suggested the four-time NBA champion should be fired on the basis that the act would not be acceptable in any other workplace environment.

Ex-Warriors forward Stephen Jackson also made his voice known on social media, revealing he had spoken to Green on Thursday night and had advised that he must take responsibility for his actions.

‘There’s no reason to sucker-punch a young fella. I told Draymond last night, he gotta fix that situation with Poole, you know what I’m saying? ‘Cause he don’t benefit it from it at all.

‘He gotta be the big bro and go over there and tell lil bro “I sp***** out…” But you never hit the lil homies like that in practice or your teammates. You never do that.’