‘Social network of brains’: Players team up to solve a Tetris puzzle by staring at lights

A ‘social network of brains’ could allow people to send thoughts to each other’s minds and work together to solve puzzles in teams of three or more, researchers believe.

Scientists at the University of Washington in Seattle set up a three-player game of Tetris in which one person could not see the whole screen and had to rely on silent instructions sent via electrical brain signals.

Players were able to communicate by staring at LEDs flashing at different rates, which prompted their brains to emit electrical signals which could be picked up by sensors.

Researchers have previously linked two people’s brains using similar means but the latest experiment is the first to allow for group communication, according to the MIT Technology Review.

Scientists at the University of Washington in Seattle set up a three-player game of Tetris in which one person had to rely on silent instructions sent via electrical brain signals. Left: the screens seen by the Receiver, right: the ones seen by the Senders

What is an EEG and how does it work?

An electroencephalogram (EEG) is a recording of brain activity which was originally developed for clinical use.

During the test, small sensors are attached to the scalp to pick up the electrical signals produced when brain cells send messages to each other.

In the medical field, EEGs are typically carried out by a highly trained specialist known as a clinical neurophysiologist.

These signals are recorded by a machine and are analysed by a medical professional to determine whether they’re unusual.

An EEG can be used to help diagnose and monitor a number of conditions that affect the brain.

It may help identify the cause of certain symptoms, such as seizures or memory problems.

This has led to the creation and design of a number of futuristic sounding gadgets.

These have ranged from a machine that can decipher words from brainwaves without them being spoken to a headband design that would let computer users open apps using the power of thought.

In the Tetris-like game three players had their brain signals measured by electroencephalograms (EEGs).

One player – the Receiver – was in charge of rotating the falling blocks, but was not shown the whole screen.

The other two players – the Senders – gave him instructions by staring at LEDs flashing at either 17 Hz (times per second), meaning ‘rotate’, or 15 Hz, meaning ‘do not rotate’.

Looking directly at the LEDs caused the Senders’ brains to emit electrical signals of the same frequency, scientists said.

The signals were picked up by EEGs and transmitted to the Receiver using transcranial magnetic stimulation (TMS).

The Senders were shown what the third player had done and were asked to stare at the LEDs again to approve or reject the Receiver’s decision.

In a further test of the system, which the researchers called BrainNet, one Sender’s signal was deliberately corrupted with irrelevant noise.

The Receiver was able to judge which of the Senders was more reliable, the same way as a regular social network, the scientists said.

On average the players made the correct move 81 per cent of the time, far higher than the performance expected by chance.

Five groups of three people took part in the experiment.

‘We found that Receivers are able to learn which Sender is more reliable based solely on the information transmitted to their brains.

‘Our results raise the possibility of future brain-to-brain interfaces that enable cooperative problem solving by humans using a ‘social network’ of connected brains.’

A diagram showing how the electrical signals were sent by two of the players (left) by staring at LEDs flashing at different frequencies and transmitted to the third player, the Receiver 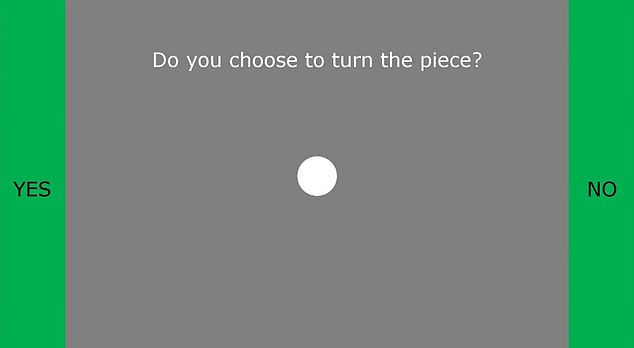