Sofa firm DFS Furniture is set to axe 200 workers in its Sofa Workshop and Dwell chains after suffering a £271million sales hit from lockdown.

The retailer, which employs 5,500 staff, said it is making a ‘targeted reduction’ of roles amid an overhaul of the two brands.

The warning came as it said revenues slumped to around £725million in the year to June 28 after it was forced to freeze deliveries for most of its final quarter due to the coronavirus pandemic.

DFS said: ‘Reflecting the challenging outlook for our market, we are taking necessary actions to preserve our future competitiveness.

‘We have commenced an operational restructuring of Sofa Workshop and Dwell to improve the returns generated by those brands.’

DFS said it expects pre-tax losses of between £56million and £58million for the year as a result of the delivery pause.

But the group said sales have bounced back strongly since stores reopened in May – soaring 69 per cent year on year.

‘We believe this performance materially benefited from latent demand from customers that would otherwise have completed purchases in late March, April or May and, given the wider economic uncertainty, we remain cautious on the outlook for demand,’ the group added.

It said online sales have remained strong even though stores are now open, up 77 per cent year on year from the start of the lockdown until July 12.

The restructuring across its Dwell and Sofa Workshop brands, which was first revealed in March, comes after the group furloughed 5,000 staff amid the lockdown.

It said this government support, together with the business rates holiday, only partly offsets the ‘substantial losses that we have incurred due to the business suspension’. 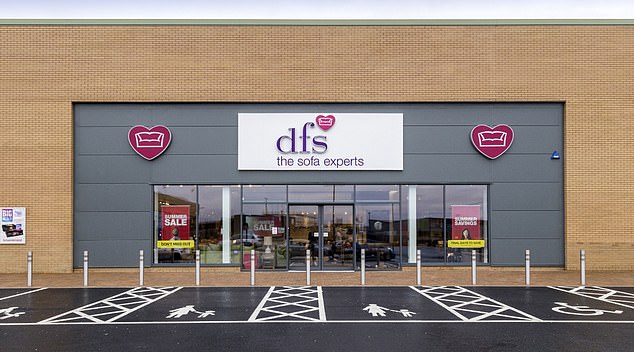 The move follows a series of businesses pulling the trigger on layoffs less than 24 hours after Chancellor Rishi Sunak delivered a £30billion package designed to keep people off the dole queue last week.

John Lewis confirmed that eight of its stores will not be reopening after closing for lockdown while Rolls Royce and Burger King said job cuts were still on the cards, with Boots also announcing redundancies.

Mr Sunak’s mini-Budget included a £1,000 ‘jobs retention bonus’ for business who bring workers back off furlough, and half-price meals out funded by the government, but he conceded that he could not protect all workers and the UK was on track for a ‘severe’ recession.