Sofia Richie was leading the glamour on Wednesday night, as the 76th Venice Film Festival began with the premiere of Hirokazu Kore-eda’s The Truth.

The model, 21, flashed her toned abs in a grey sequinned bralet as she walked the red carpet in Italy for the opening gala of the 10-day festival.

Sofia’s appearance comes after she was gifted with a $250,000 Aston Martin by her boyfriend Scott Disick, 36, as she celebrated her 21st birthday in style. 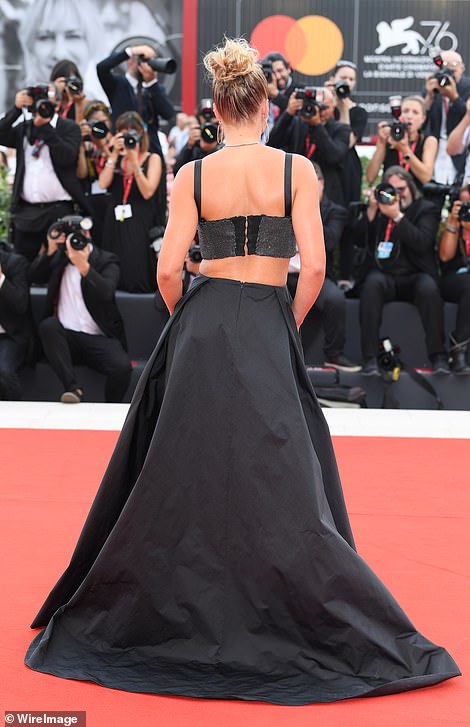 Incredible: Sofia Richie was leading the glamour in a sequinned bralet and matching skirt on Wednesday night, as the 76th Venice Film Festival began with the premiere of Hirokazu Kore-eda’s The Truth

Sofia ensured that every inch of her tanned pins was on full display as she walked the red carpet for the premiere of The Truth.

The daughter of singer Lionel Richie paraded her toned abs in the revealing bralet, teamed with an a-line skirt that displayed every inch of her pins.

Pulling her blonde tresses into a curled topknot, Sofia ensured that all eyes were on her as she finished the look with a delicate silver necklace and matching drop earrings. 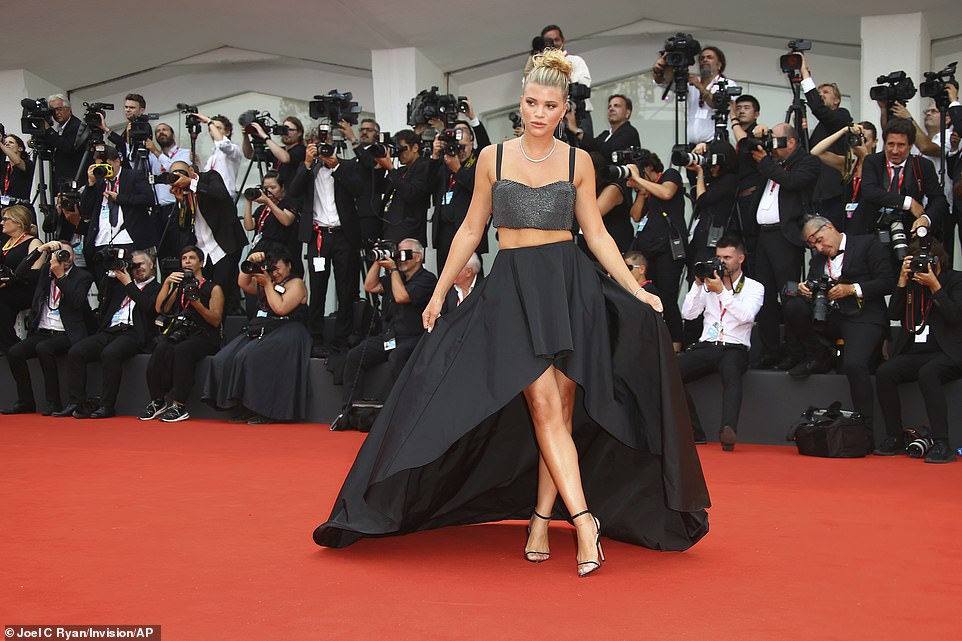 Jaw-dropping: The daughter of singer Lionel Richie paraded her toned abs in the revealing bralet, teamed with an a-line skirt that displayed every inch of her pins 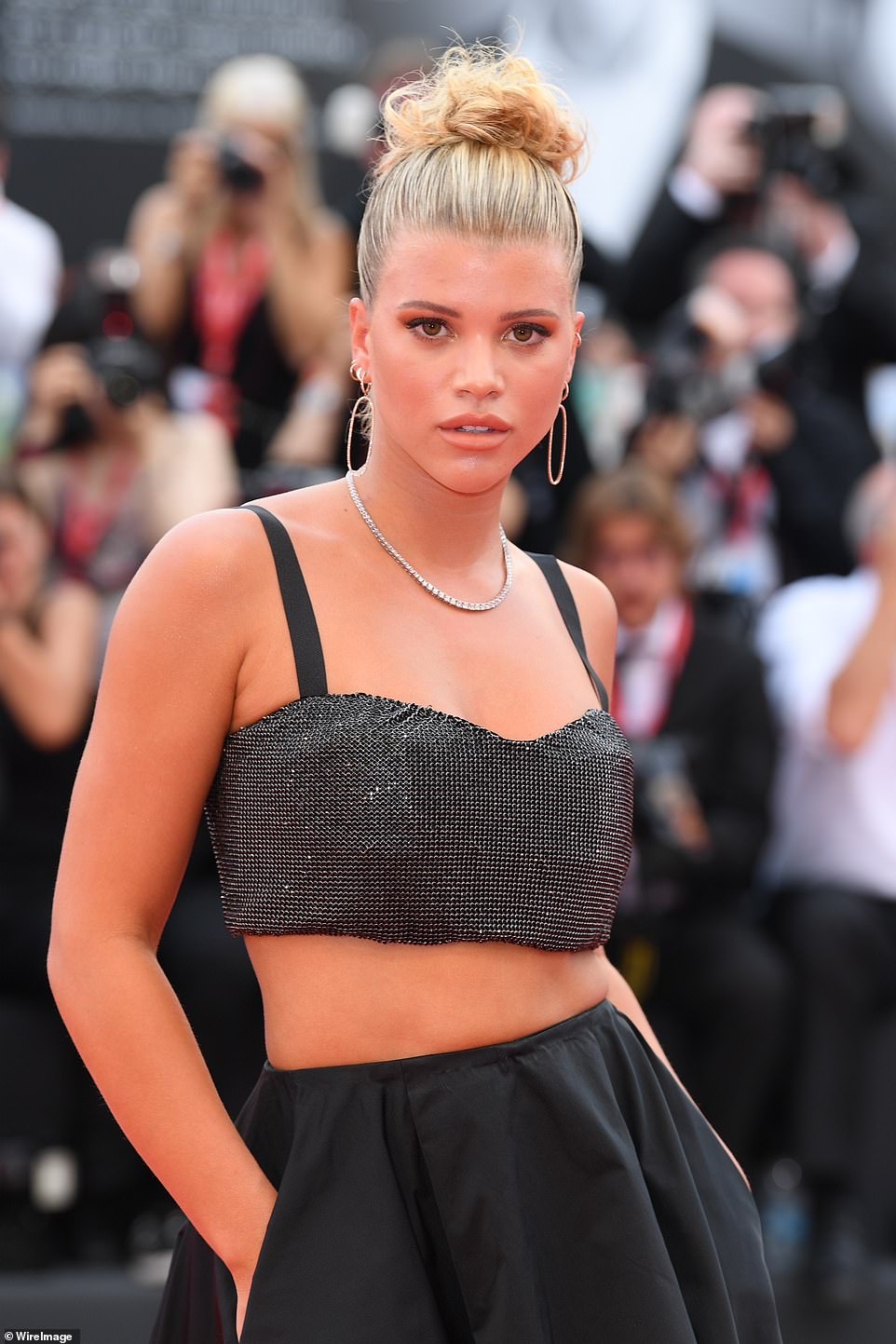 Glamour girl: Pulling her blonde tresses into a curled topknot, Sofia ensured that all eyes were on her as she finished the look with a delicate silver necklace and matching drop earrings 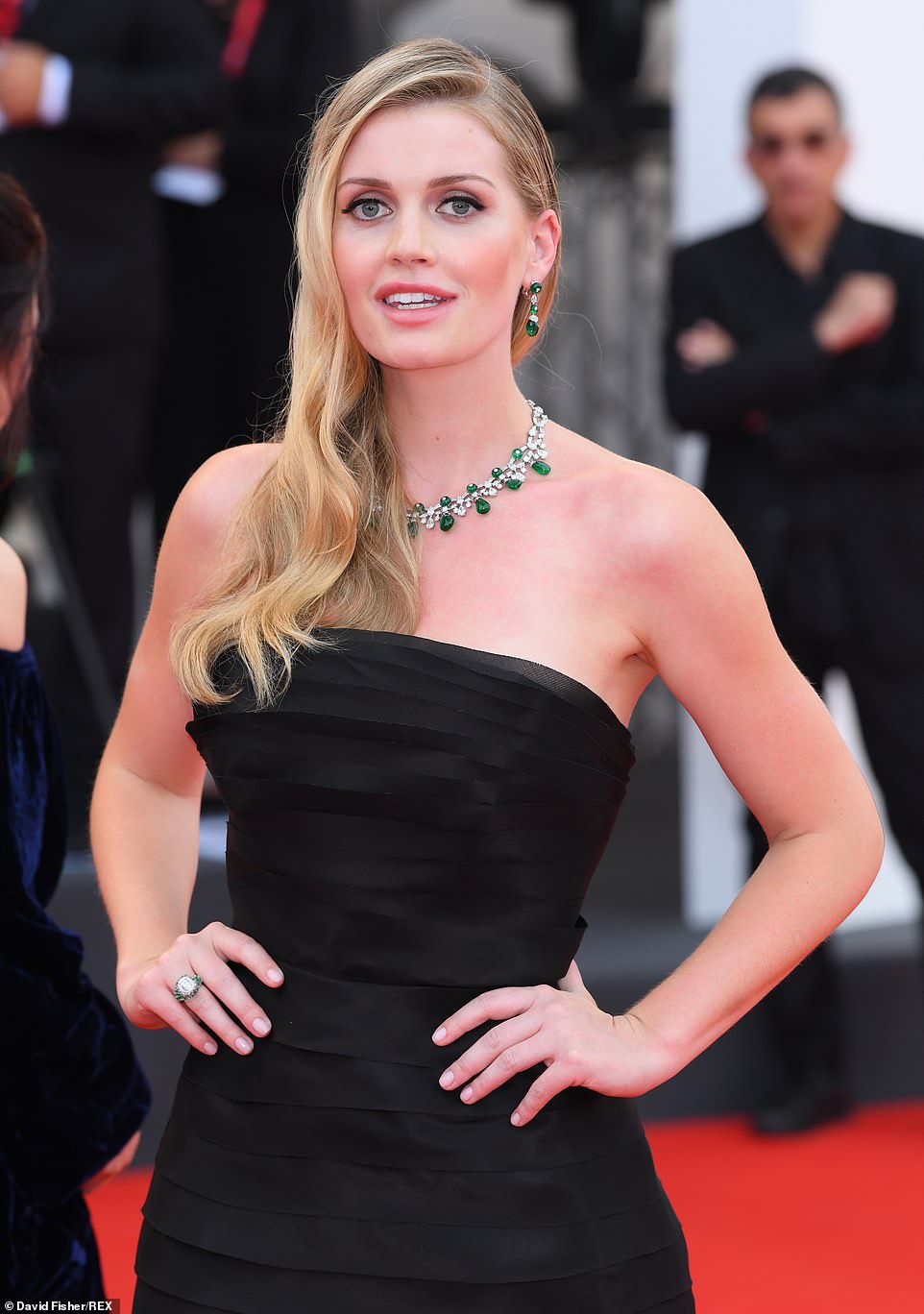 Stunning: She kept her blonde tresses in a simple side-swept look as she oozed Old Hollywood at the event

Sofia’s appearance comes after she celebrated her 21st birthday in lavish style, including a surprise gift from her boyfriend Scott.

The Keeping Up With The Kardashians star gifted her with a customised Aston Martin DB11 which costs upwards of $250,000.

Sofia and Scott have been going strong since September 2017 despite their 15 year age-gap. The businessman and his ex Kourtney Kardashian split up for good after more than ten years together in 2017, but they ‘co-parent’ their children Mason, nine, Penelope, seven, and Reign, four. 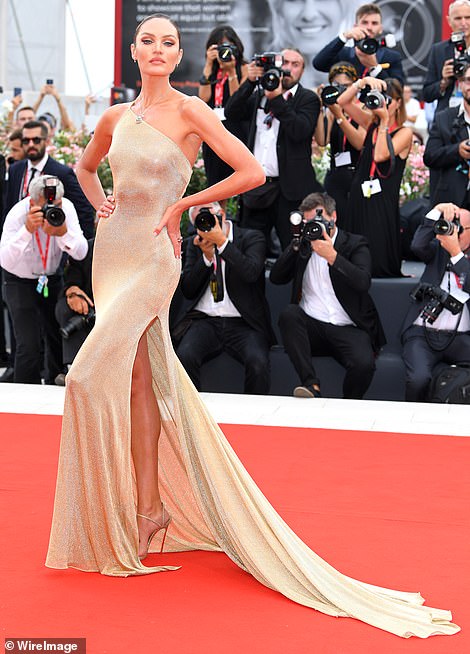 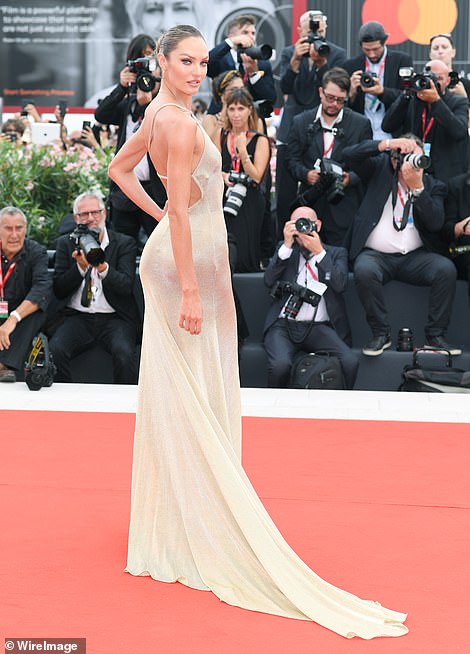 Hollywood beauty: Candice Swanepoel cut a glamorous figure in a cream metallic strapless gown with a delicate train as she walked the red carpet 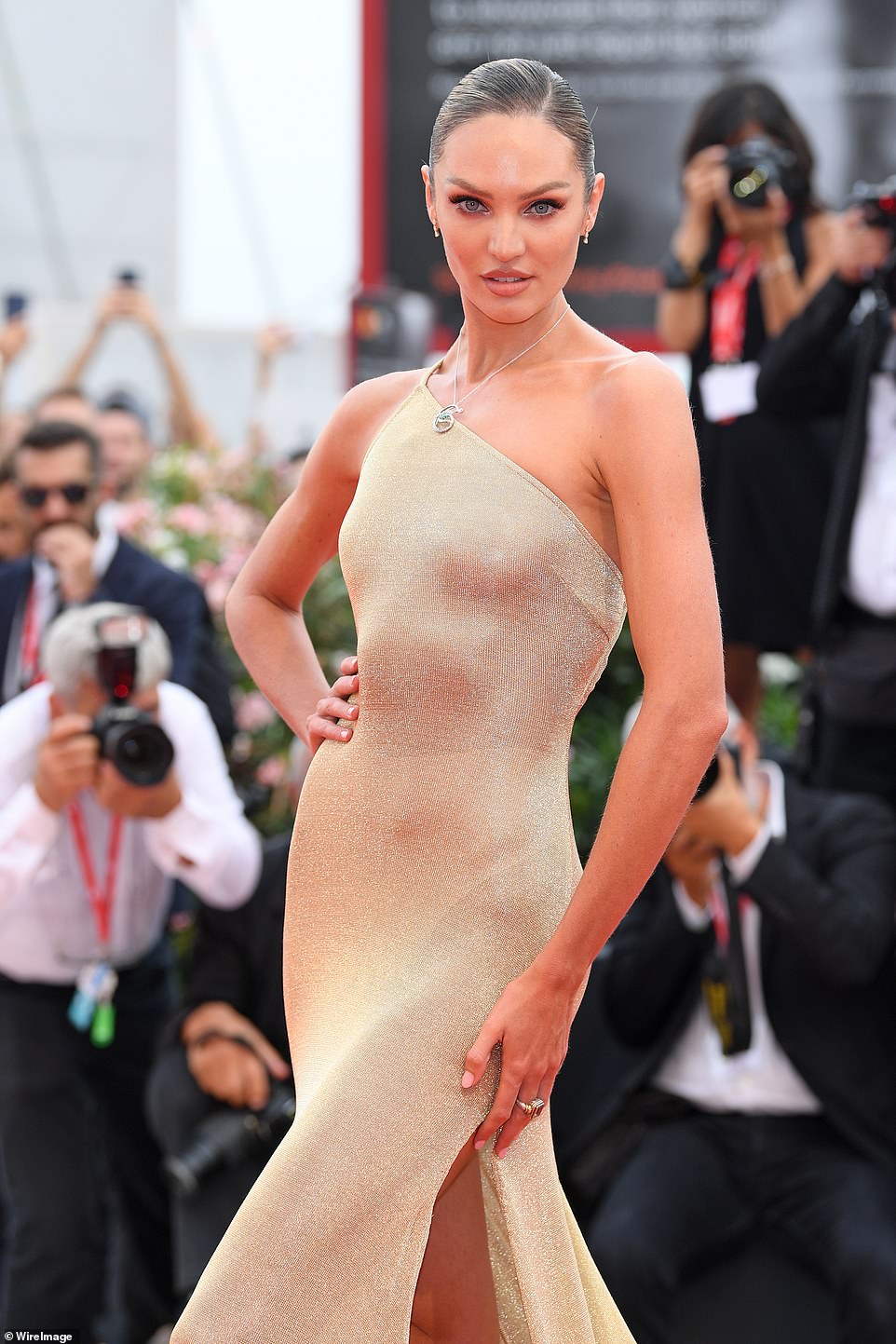 Sexy: The South African model paraded her incredibly slender physique in the strapless gown with a delicate gold sheen and a thigh-high split

Also among the stars in attendance was singer Mel B who oozed Old Hollywood glamour in a leopard print silver floor length gown.

The singer, 44, looked sensational in the simple but sophisticated gown and hoop earrings as she kept her dark cropped tresses in a slicked-back style.

The 76th Venice Film Festival sees a highly anticipated lineup compete for the coveted Golden Lion award, with many big Hollywood pictures making their premiere at the annual showcase.

Opening the showcase is The Truth, which is the first of Hirokazu Kore-eda’s films to be directed outside of his native Japan.

Starring Catherine Deneuve and Juliette Binoche, it tells the story of French film star Fabienne, and the problematic relationship she has with her daughter Lumir.

Leading the so-called Hollywood contenders at Venice is the much-anticipated Joker, directed by The Hangover’s Todd Phillips, and sees the acclaimed Joaquin Phoenix play the iconic DC villain in a realistic take on his origin story.

Set in the 1980s, the film has already sparked awards buzz for Phoenix’s performance, as the film tells the story of Arthur Fleck, a man so down on his luck he becomes a murderous psychopath hellbent on causing havoc in Gotham.

Another film boosted by Hollywood star power is Ad Astra, which stars Brad Pitt as an astronaut who journeys into space to find his lost father, played by Tommy Lee Jones.

The film is directed by James Gray, who has competed for the Palm d’Or at the Cannes Film Festival on several occasions, including his 2013 film The Immigrant.

Marriage Story – which stars Scarlett Johansson and Adam Driver – will also compete for the Golden Lion, and tells the story of a couples’ gruelling divorce. The film is also being distributed by Netflix.

Competing out of competition is the Shakespeare adaptation and Netflix release The King, directed by David Michôd and starring Call Me By Your Name favourite Timothée Chalamet as King Henry V.

The festival has also courted controversy by opting to screen the latest work from director Roman Polanski, who fled the US after facing historical sexual abuse charges, and has been expelled by the Oscars Academy.

Polanski will presenter An Officer And A Spy – or J’Accuse in French – which centres on the infamous 19th Century Dreyfuss affair and stars Oscar winner Jean Dujardin.

Venice also faced backlash last year when not one of its Golden Lion contenders was helmed by a female director.

This year marks a slight improvement, with two female-directed films, Babyteeth and The Perfect Candidate.

Julie Andrews, 83, will also be awarded with the coveted Honorary Lion for Life’s Work to celebrate her incredible 55 years in the film industry.

Rolling Stones legend Mick Jagger, 76, will also make an appearance on the closing night, as he stars in thriller The Burnt Orange Heresy directed by Giuseppe Capotondi.