Motels have never crossed the Atlantic in quite the same way as hamburgers, milkshakes and Krispy Kreme doughnuts.

The gruesome shower scene in Alfred Hitchcock’s 1960 film Psycho — in which Marion is stabbed to death after checking into Bates Motel — can’t have helped.

Then, in the Seventies, American motels developed a reputation for being little more than doss-houses where you could rent rooms by the hour and where couples would come and go without passing through reception if they did not wish to be seen in public together.

The brand new Mollie’s Motel and Diner, which recently opened on the busy A420 between Swindon and Oxford. The man behind the venture is Nick Jones, the founder of the Soho House empire

The closest we ever got to motel mania in Britain was ITV’s Crossroads, the soap opera based on a fictional establishment in Birmingham. The show somehow pulled in up to 18 million viewers a night in the Sixties and Seventies.

But could this all be about to change? A motel called Mollie’s has just opened on the busy A420 between Swindon and Oxford, with two more planned for later this year — in Bristol and Manchester — and a further ten on the drawing board.

It charges £50 a night and comes with an American-style diner and drive-through (sorry, drive-thru) offering ‘meal deals’.

The unlikely man behind this potential revival is Nick Jones (estimated wealth £150 million) who is mates with the Duke and Duchess of Sussex and is founder of the Soho House empire that operates trendy hotels, restaurants and clubs everywhere from London’s Soho to Berlin, Mumbai, New York and Chicago, Barcelona, and Amsterdam.

‘I used to watch Crossroads every night,’ says Jones, 55, who is married to the BBC’s Desert Island Discs presenter Kirsty Young.

‘There was always an argument with my mother because she thought that when the credits rolled it was the end of the episode, when in fact there was always a little add-on bit afterwards.’ 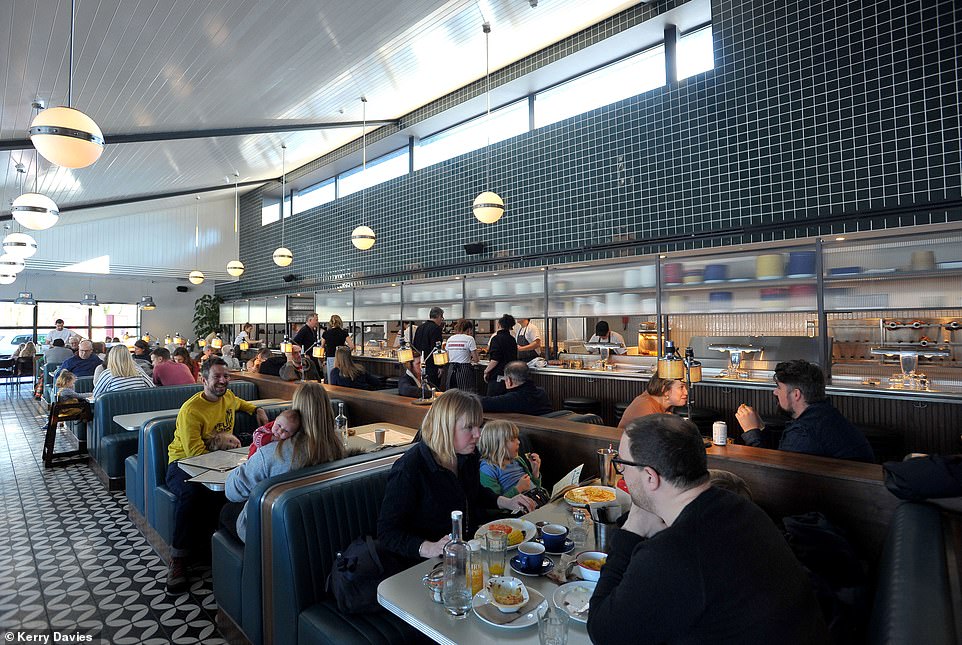 Inside the Fifties-style diner at Mollie’s with ribbed leather seats, plastic Wimpy-style ketchup, swivelling stools at the chrome counter, lamps that look like microphones, and pretty waitresses wearing tight jeans and Californian smiles

And just as the Crossroads matriarch Meg Mortimer (played by Noele Gordon) used to worry about the wonky sign above the entrance to her ramshackle building, so does Jones fret over why the red neon lights behind the letters ‘MOLLI’ have all gone out the day we meet. At least the E is working.

Jones must be hoping there is no repeat of what happened to Arthur Heineman, the American who opened the world’s first motel in San Luis Obispo, California, in 1925, charging $1.25 per room per night.

Originally it was called Milestone Motor Hotel, but the name was too long to fit on the roof, so he abbreviated it to Milestone Mo-Tel. He failed to trademark it.

Motels in those days were called either ‘auto courts’ or ‘tourist courts’ and were a response to widespread car ownership, which allowed the middle-classes to travel long distances and spend the night en route. 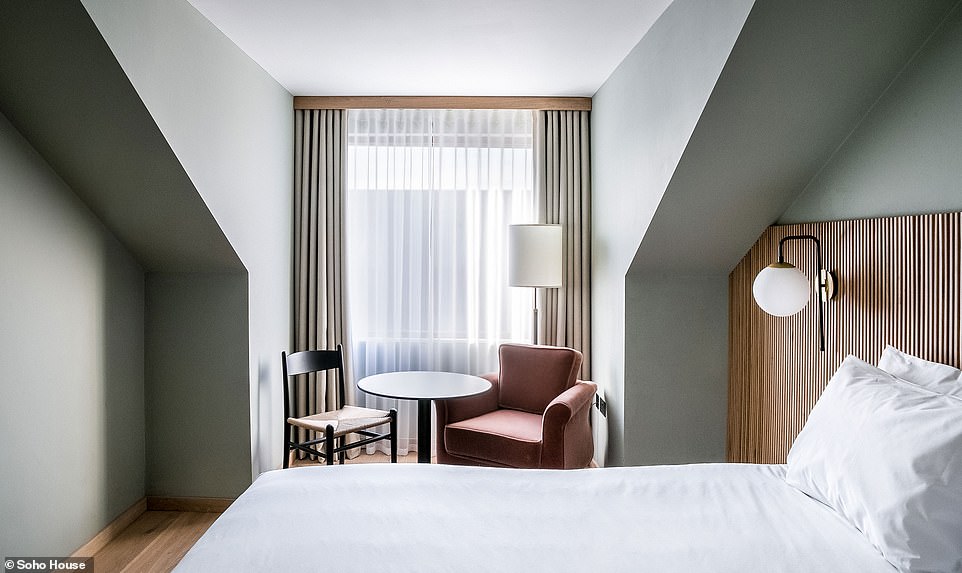 The hotel has 79 bedrooms. It has had £9 million of investment and several members of staff have been recruited from Travelodge, Premier Inn, Pizza Express and McDonald’s 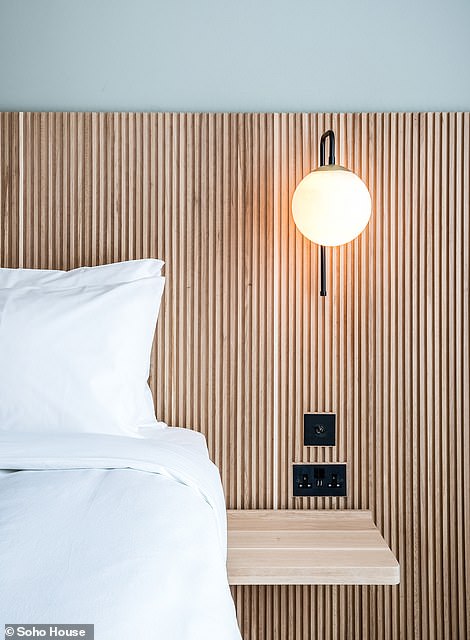 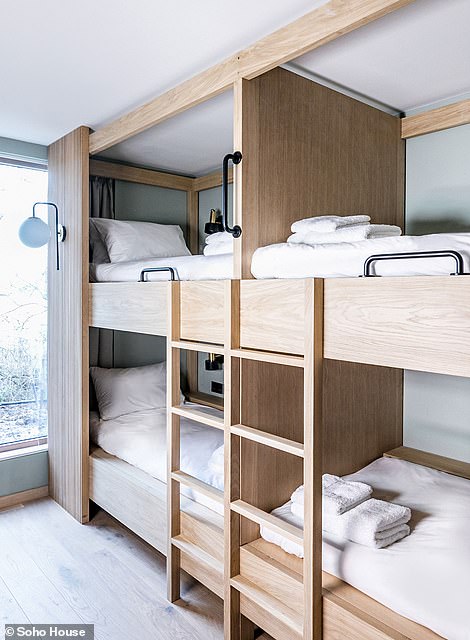 The bedrooms at Mollie’s range in size from cosy double rooms to interconnecting family rooms to bunk rooms catering to larger groups. All rooms are air conditioned and decked out with Egyptian cotton sheets

One motel still surviving from that era is the 3-V Tourist Court in St Francisville, Louisiana. It was built in 1938 and is listed on the National Register of Historic Places.

To attract passers-by, they advertised themselves with big neon signs and boasted about having ‘air cooling’ (an early term for air conditioning) during hot summers. Nearly all of them were owner-operated — ‘mom and pop’ businesses — but by the Sixties, big chains moved in, offering more in the way of luxuries.

The coin-operated Magic Fingers Vibrating Bed proved popular. Introduced in 1958, it gave guests 15 minutes of ‘tingling relaxation and ease’. But, when people broke into the coin boxes, they were discontinued. Water beds became another favourite feature, but on occasion even these were stolen.

Mollie’s — which has 79 rooms — has had £9 million of investment and several members of staff have been recruited from Travelodge, Premier Inn, Pizza Express and McDonald’s. 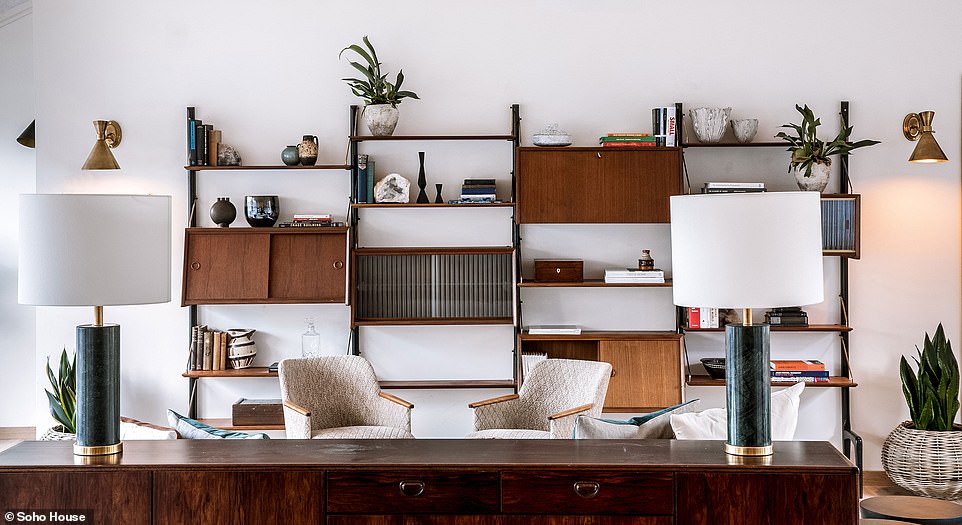 One of the communal spaces within the motel. It charges £50 a night and comes with a drive-thru offering ‘meal deals’

Now, the question is: can Jones, having revolutionised the world of private members’ clubs, transform roadside hospitality in Britain, where the likes of Welcome Break rule supreme without ever being particularly welcoming?

Nostalgia is on his side. This year is the 55th anniversary of Crossroads, which first opened its doors in 1964 (one TV critic dismissed it as ‘amateurish pap’), and, despite the sets being constructed from flimsy canvas and board, it went from strength to strength until 1988. It was revived from 2001 to 2003, but the motel became a hotel.

Jones says that 24,000 cars pass Mollie’s every day and many of the occupants of those vehicles might be tempted to stop if they know that they will be properly fed and watered — or, as the strapline says: ‘Eat Drink Nap.’ Making back that £9 million might take some time, but during my stay there was no shortage of interest from local people.

The theme in the diner is Fifties America, with ribbed leather seats, plastic Wimpy-style ketchup, swivelling stools at the chrome counter, lamps that look like microphones, and pretty waitresses wearing tight jeans and Californian smiles.

Heaven knows what Benny Hawkins (Paul Henry) would make of it all. He was the Crossroads handyman, always sporting a soft, woolly beanie hat that covered his equally soft, woolly brain and was rarely out of trouble.

For sure, Benny would love the all-day bacon and egg baps and ‘dirty burgers’, but he might be flummoxed by the breakfast offering of quinoa, buckwheat, oats, tomato and kale, with a couple of poached eggs on top. 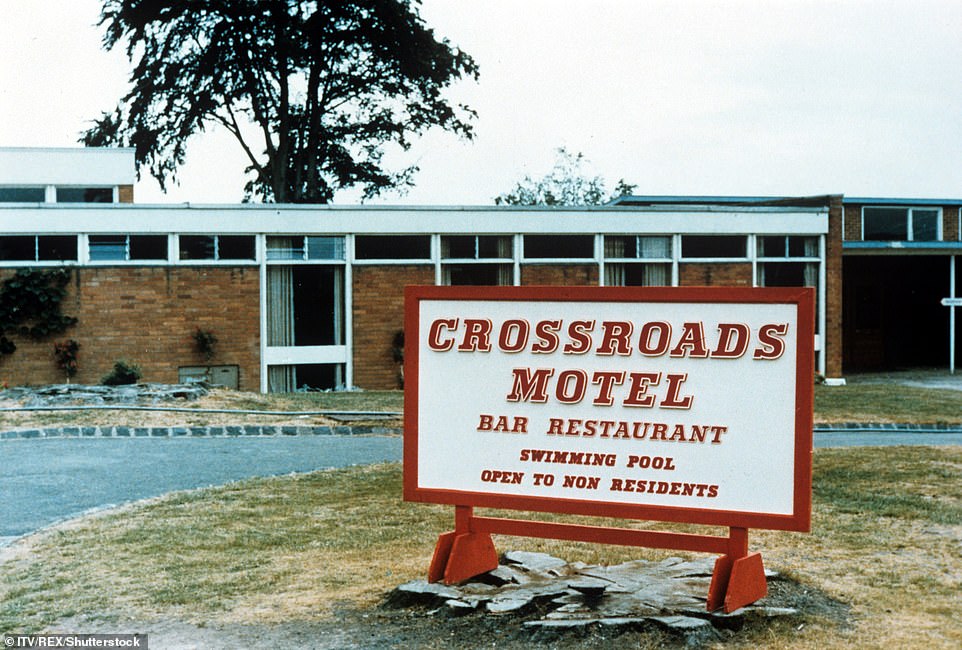 The closest the UK ever got to motel mania was ITV’s Crossroads, the soap opera based on a fictional establishment in Birmingham

And whereas guests at Crossroads were lucky to get a decent cuppa, their 2019 counterparts at Mollie’s can order espresso martinis and a selection of ‘house presses’, such as a concoction featuring broccoli, cucumber, celery, lemon, spinach, parsley and ginger.

Who knows if motels have a future in Britain. The likes of Travelodge and Premier Inn will do everything in their power to stop them.

But Nick Jones will take heart from what the Iowa-born writer and Anglophile Bill Bryson said on the subject: ‘I love everything about motels. I can’t help myself. I still get excited every time I slip a key into a motel room door and fling it open.’