The Southend manager took to Twitter and asked: ‘Was this virus a natural mistake or a designed mistake…? I wonder does this virus deliberately attacks a certain blood type….?’

Twitter moved early on in the crisis to ensure that users searching for information on the coronavirus were shown reliable sources such as the World Health Organization rather than coming across conspiracy theories or ‘fake news.’

The Southend manager (pictured) took to Twitter and asked: ‘Was this virus a natural mistake or a designed mistake…? I wonder does this virus deliberately attacks a certain blood type….?’

The tweet attracted a flurry of comments, with many criticising his questions.

His comments come as new analysis from the University College London shows people from black, Asian and minority ethnic (BAME) communities are two to three times more likely to die from coronavirus.

Researchers found the risk of death from Covid-19 for black African groups was more than three times higher than the general population. 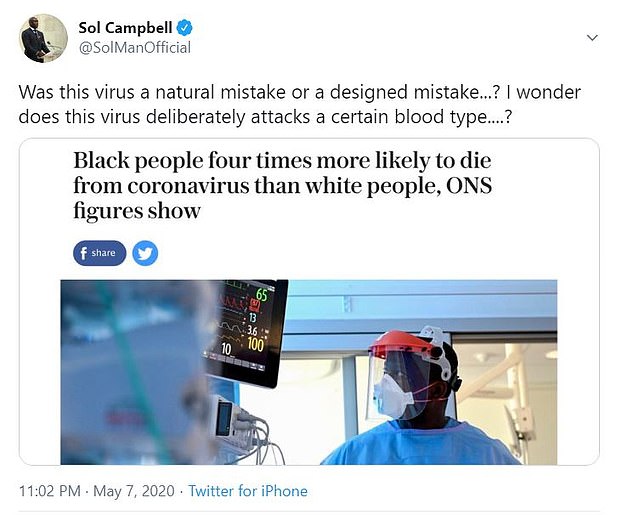 His tweet (pictured above) comes as new analysis from the University College London shows people from black, Asian and minority ethnic (BAME) communities are two to three times more likely to die from coronavirus

Dr Chaand Nagpaul, BMA council chair, said:  ‘These are stark and disturbing statistics, with such an overwhelming proportion of doctors having died being from BAME backgrounds.

‘This is why the BMA called for an urgent investigation, since the Government has a duty of care to the significant number of doctors from BAME backgrounds who are serving the nation as we fight this virus.

‘It is vital that this review records data on healthcare workers who are admitted to hospital, their occupational status, whether they worked in infectious areas, and also whether they had access to appropriate personal protective equipment.

‘While this investigation takes place, it is crucial that we put in place all measures right now to protect those BAME doctors who are at high risk of serious illness or death.

‘This must include occupational risk assessments, including whether they have other medical conditions, and redeploying those doctors at highest risk away from Covid-19 areas.

‘Such doctors can still provide an essential role in the NHS in less infectious or non-patient facing areas, including remote working with telephone and video consultations.’

There was 12 per cent lower risk of death from Covid-19 from white populations in England than the general population, the analysis of NHS data by University College London (UCL) also found.

‘Is this virus only racist in the uk?? In italy it was the older generation who was dying did anyone make up accusations of that?? Of course not,’ @clarkyengland replied to Mr Campbell’s tweet.

‘Data shows its affecting those in poor health or with otherwise vulnerable. If you have diabetes, hypertension, high blood pressure, asthma – all conditions prevalent in black communities, you are at risk. Another reason to keep fit and eat right,’ @ShaunReidESQ commented.

Commenting on the back of the UCL report, co-author Dr Delan Devakumar, of the UCL Institute for Global Health, said: ‘Rather than being an equaliser, this work shows that mortality with Covid-19 is disproportionately higher in black, Asian and minority ethnic groups.

‘It is essential to tackle the underlying social and economic risk factors and barriers to healthcare that lead to these unjust deaths.’

Only one white doctor has died from Covid-19 while 22 Black, Asian and ethnic minority doctors have lost their lives. 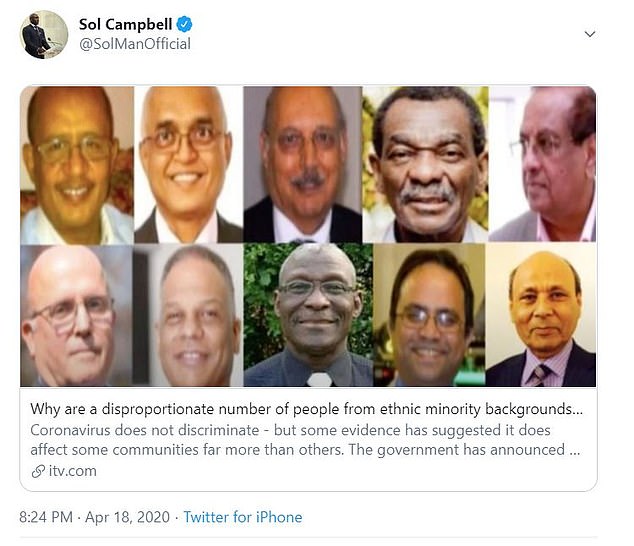 A recent report from the Institute of Fiscal Studies (IFS) think-tank, earlier this month said that Black and Asian Britons are two-and-a-half times more likely to die from coronavirus than white people.

The report compared the number of hospital deaths in the NHS during the COVID-19 crisis against ethnicity.

Diane Abbott, MP for Hackney North and Stoke Newington, has voiced concerns about the disproportionate number of BAME deaths from Covid-19.

She said of the 17 doctors who had died from Covid 19, 16 were from BAME backgrounds.

MailOnline looked at the latest figures and found they are actually higher and that 22 doctors from the BAME community are thought to have died.

A spokesman for the British Medical Association confirmed that at least at least 22 doctors who died have been from that group. 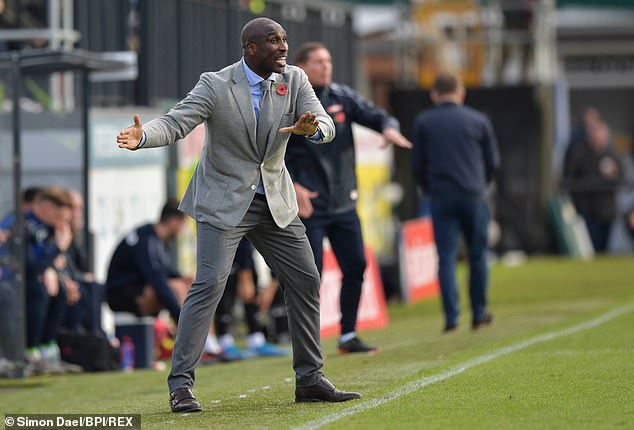 Dr Chaand Nagpaul, BMA council chair, have repeated calls for an urgent investigation into why such a large proportion of doctors have died from BAME backgrounds.

He added: ”This is why the BMA called for an urgent investigation, since the Government has a duty of care to the significant number of doctors from BAME backgrounds who are serving the nation as we fight this virus.’

England is the most affected nation in Europe in terms of coronavirus deaths.

Project Restart is aiming to get the Premier League football season up and running after it came to a halt in mid-March after the government banned large gatherings.

Campbell’s Southend are in 20th and 16 points adrift of AFC Wimbledon and would have just nine games to save themselves.

‘I don’t think you can consider bringing back football here until it’s safe to do so but we have to be ready for every possible outcome.

‘I’m not sure what’s going to happen or what the authorities will decide to do but we have to be flexible in our thinking so we’re ready to go again whenever that may be,’ Campbell told The Mirror.