Solar eclipse viewers Google ‘Am I blind?’ after event

It appears President Trump wasn’t the only one risking blindness to stare at the eclipse without protection yesterday.

Many eclipse viewers flocked to Google moments after the event to figure out if they’d caused permanent damage by ignoring advice to wear safety glasses.

My eyes hurt: Google trends data shows a slew of people searching why their ‘eyes hurt’ around an hour after a peak in Google searches for ‘solar eclipse’

I can’t see: Many concerned eclipse viewers were worried they couldn’t see after the event, according to a peak in Google searches

Am I blind: Other Google search terms included this one at 2pm, as the eclipse was passing over from coast to coast

What happens if you stare at the sun: Better late than never, there was a surge of people Googling what happens if they look at the eclipse without glasses, although it’s timing shows most people were looking after doing so

Retina: Valid concerns over whether they could have damaged their eyesight and retinas seems to have led to spike in the search term ‘retina’

Search terms such as ‘my eyes hurt’ and ‘what happens if you stare at the sun?’ shot up in popularity at the time of the eclipse.

‘Vision loss’, I can’t see’ and ‘am I blind’ were also popular, although just how they planned to read the answers to such searches remains a mystery.

So how can you know if you damaged your own retinas?

Here we explain the symptoms – from blurriness to vision spots and distortion – and whether you should be concerned.

What is solar retinopathy?

If you stare at the sun for too long, it causes damage to the retina known as solar retinopathy.

Solar retinopathy occurs when the retina has been damaged by harmful rays such as UV rays from the sun. 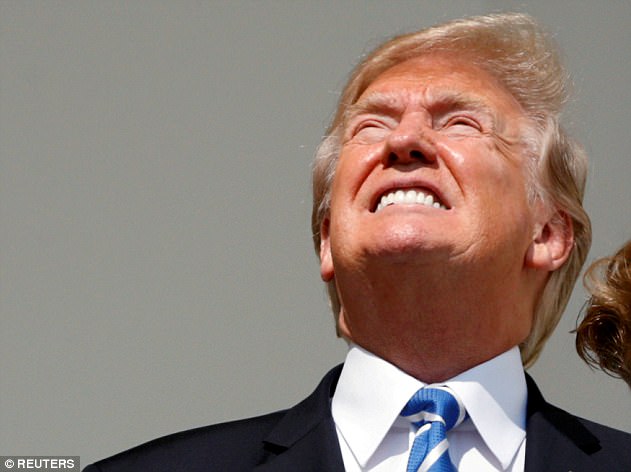 President Trump couldn’t refrain from looking up towards the eclipse yesterday afternoon. He was seen later using the protective eyewear, but he could’ve caused damage to his retinas

Light will enter the center of the eye known as the pupil and head towards the back where the retina is located.

If that light is a UV ray, then it can burn through the exposed tissue of the retina if the rays are viewed long enough.

The burning of the exposed tissue will destroy cones and rods around the area resulting in a blind spot or color damage in the vision.

These cones and rods are important to protect because they are photoreceptors.

Without certain cones and rods in your vision, it is impossible for light to be broken down and processed by your brain.

Damage to your vision can occur without feeling any pain after staring directly at harmful rays.

Symptoms could start as early as a few hours after exposure or take a couple of days to develop.

While many on Twitter were panicking about headaches, experts insist that is not a cause for concern.

These are the classic symptoms to look out for:

Still not sure? Try using the ‘Amsler Grid’ eye test

The Amsler Grid is used by eye doctors to detect potential macular degeneration or vision damage from harmful rays.

To test your vision at home, print off the grid and place it 14 to 16 inches away from your eyes.

If you normally wear glasses, make sure that you have them on to accurately test any new distortions with your vision. 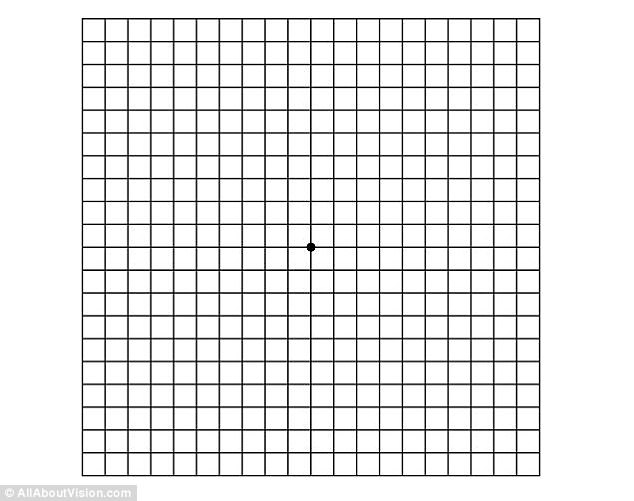 The Amsler Grid is an easy way to test your eyesight before making an appointment with an optometrist. Print the grid off and place it 14 to 16 inches away to test your vision

Test each eye separately by cupping one and focusing the other on the black dot in the middle of the grid.

While your eye is focused on the black dot ask yourself if any of the lines appear wavy, distorted or if there are any areas of the grid you can’t see.

Also take notice if there are any black spots or blind spots on any areas of the grid.

If any of the above occur, mark the location on the grid and bring it in to your next optometrist appointment.

How do you treat solar retinopathy?

There is no treatment for solar retinopathy except giving the eyes time to heal.

If the pain is severe, some doctors are able to give you medication to help ease the discomfort as the eyes begin to heal.

Recovery can take one month to twelve months depending on the extent of damage to the retina.

But some damage could be permanent to your vision if you stared at the sun for long enough.

See an optometrist if you think permanent damage has occurred to discuss your options.

Are you at risk if you wore protective eyewear?

Protective eyewear should be sufficient enough if it was the specialized glasses that were made for the event.

Experts say it is normal to experience some discomfort after the eclipse because your eyes have been looking at one object for a long period of time.

If you wore sunglasses or looked at the sun without the specialized glasses, though, you could be at risk.

Sunglasses were not recommended by eye experts because the amount of light they still let into the retinas.

While they work for normal-day use, sunglasses are never recommended to be used when staring directly into the sun.

The only way of actually knowing if you damaged your eyesight is if you see an eye specialist.