A powerful solar storm is due to hit Earth today and could cause havoc for power grids, weather agencies have warned.

The UK’s Met Office and the US’s National Oceanic and Atmospheric Administration (NOAA) have forecasted a coronal mass ejection (CME) – a massive expulsion of plasma from the Sun’s corona (its outermost layer) at around 12pm EST (5pm BST) today.

Possible effects of the solar storm, caused by the CME, are power grid fluctuations and orientation irregularities for spacecraft in the form of ‘increased drag’ on low-Earth orbiters.

The aurora – a natural light display in Earth’s sky, also known as the Northern Lights – may also be visible as low as New York in the US and the north of England in the UK.

A solar or geomagnetic storm is a major disturbance of Earth’s magnetosphere – the area around Earth controlled by the planet’s magnetic field – often caused by CMEs. Pictured, a coronal mass ejection (CME) from the sun, as captured by NASA’s Solar Dynamics Observatory satellite on June 17, 2015 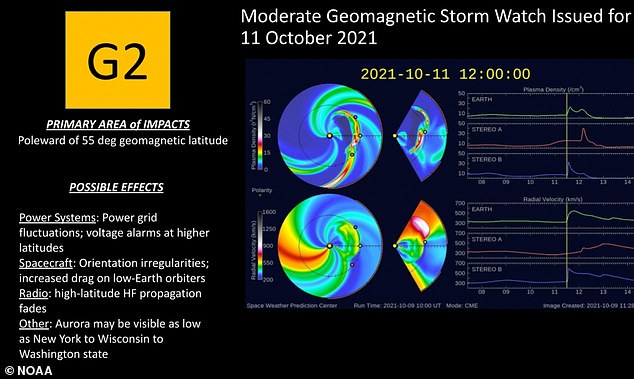 Today’s solar storm, or geomagnetic storm, is rated ‘G2’ (on a scale of one to five), so it’s considered to be ‘moderate’, according to the National Oceanic and Atmospheric Administration (NOAA)

WHAT IS A SOLAR STORM?

A solar or geomagnetic storm is a major disturbance of Earth’s magnetosphere – the area around Earth controlled by our planet’s magnetic field.

But when a CME or high-speed stream arrives at Earth it buffets the magnetosphere.

The Earth’s magnetic field is then peeled open like an onion allowing energetic solar wind particles to stream down the field lines to hit the atmosphere over the poles.

A solar or geomagnetic storm is a major disturbance of Earth’s magnetosphere – the area around Earth controlled by the planet’s magnetic field – caused by CMEs.

Today’s solar storm is forecasted at around 12pm ET, or about 5pm BST.

‘Event analysis and model output suggest CME arrival around midday on 11 Oct, with lingering effects persisting into 12 Oct,’ NOAA says on its website.

Today’s solar storm is rated ‘G2’ (on a scale of one to five), so it’s considered to be a ‘moderate’ storm.

In the UK, the Met Office puts the event anything between G1 and G3, and anywhere between the hours of 10am on Monday and 10am on Tuesday.

The CME will likely cause ‘minor to moderate geomagnetic storms’, the Met Office says, resulting in ‘enhanced auroral activity’.

‘Minor storms may continue into 12 October, before a fast wind from a coronal hole may arrive, perhaps continuing the rather active period of geomagnetic activity.

‘Aurora is possible through 11th across much of Scotland, although cloud amounts are increasing, meaning sightings are unlikely.

‘There is a slight chance of aurora reaching the far north of England and Northern Ireland tonight, but cloud breaks and therefore sightings are more likely in Northern Ireland.’

In the Southern Hemisphere, the Aurora is more likely to be seen at high latitudes – locations nearer the South Pole – although there’s a slight chance of aurora reaching the mid latitudes. 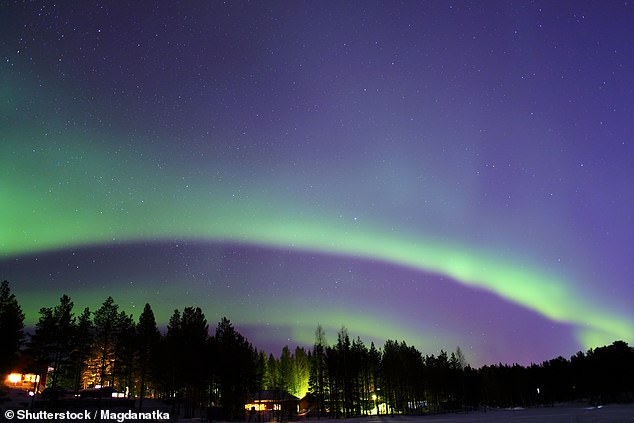 Although our Sun gives us life, it also frequently ‘sneezes’, ejecting billions of tonnes of hot plasma into space in colossal blobs of matter threaded with magnetic fields – in other words, CMEs.

These violent solar sneezes sometimes spin outward from the Sun in our direction, delivering radiation, energy and charged particles that distort and disrupt Earth’s protective magnetic field (the magnetosphere) and upper atmosphere. 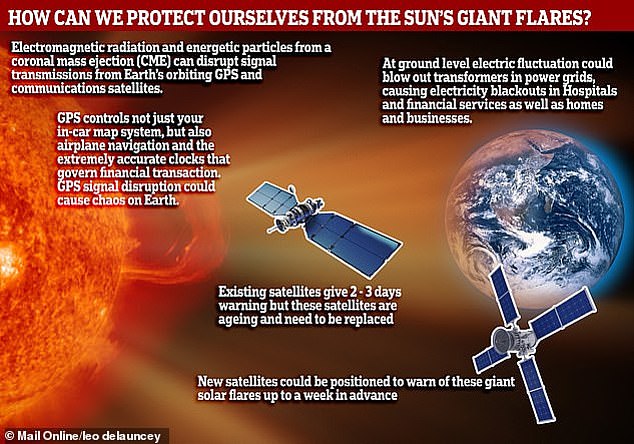 Solar flares can damage satellites and have an enormous financial cost. The charged particles can also threaten airlines by disturbing the Earth’s magnetic field 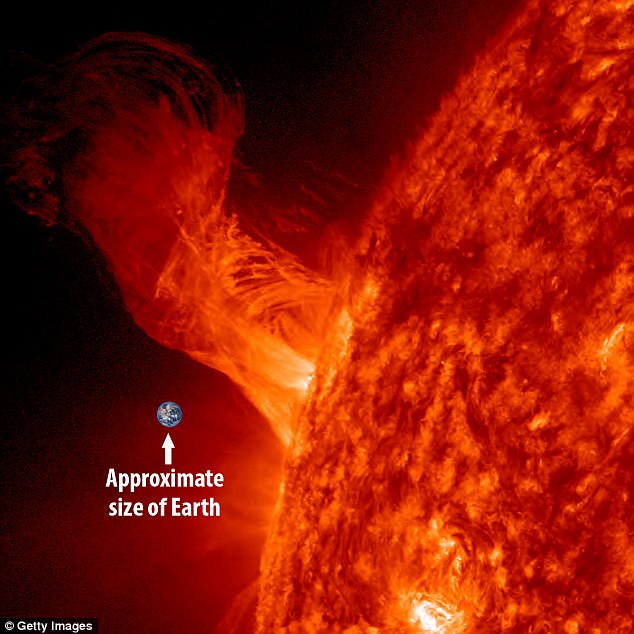 A solar eruption rises above the surface of the sun. Pictured is the relative size of Earth. These dramatic storms, caused by coronal mass ejections from the sun, hurtle towards Earth, potentially causing widespread devastation

The charged particles can also threaten airlines by disturbing the Earth’s magnetic field.

When coronal mass ejections strike Earth they cause geomagnetic storms and enhanced aurora.

‘Harmful space weather has affected Earth before, but as we become increasingly reliant on systems and technologies vulnerable to the Sun’s outbursts, future solar impacts could be even more disruptive,’ says the European Space Agency (ESA).

When a solar storm heads our way, some of the energy and small particles can travel down the magnetic field lines at the north and south poles into Earth’s atmosphere.

There, the particles interact with gases in our atmosphere resulting in beautiful displays of light in the sky – the aurora, or Northern Lights. Oxygen gives off green and red light, while nitrogen glows blue and purple.

The aurora can be seen near the poles of both the northern and southern hemispheres. In the north the display is known as the aurora borealis, and in the south it is called the aurora australis.

Solar storms aren’t dangerous to humans on Earth’s surface, but they can cause interference with power grids and GPS signals.

In 1859, a massive geomagnetic super-storm known as the Carrington event sent powerful CMEs toward Earth, disrupting communications on the ground.

If such an event were to happen in today’s world, the effects would be catastrophic.

A study published earlier this year by a University of California Irvine scientist found the internet could be crippled for weeks in the wake of a severe solar storm, due to vulnerabilities in world’s massive network of submarine communications cables.

The electromagnetic fluctuations caused by intense solar storms cannot directly harm the fibre optic cables that make up the backbone of the internet.

However, they do have the potential to take out the signal boosters dotted along undersea cables that are necessary to maintain connections over large distances.

According to astrophysicists, the likelihood of solar storm capable of causing catastrophic disruption occurring in the next 10 years is between 1.6–12 per cent.