A former soldier has died after the explosive vest he was wearing detonated, sending a Melbourne street into lockdown for more than 12 hours.

Police were called to a quiet cul-de-sac in Hallam in the city’s south-east shortly before midday on Saturday morning following reports of a crash.

Footage shows the moment the homemade explosive vest exploded after the man hit a speed bump while driving along Young Road.

The car continued travelling down the road for several hundred metres before it crashed into a parked vehicle at the corner of Homewood Boulevard.

Police found the body of a Dandenong man, 43, inside the car.

It’s understood the former soldier had been at the home of his ex-partner shortly before the incident, 7 News reported.

Police blocked off the street for 12 hours as Bomb Response Unit officers examined the scene.

‘Members attended due to explosive items located inside the vehicle and it took a considerable amount of time for the Bomb Response Unit to render these items safe,’ a police spokesperson said.

‘The circumstances surrounding (the man’s) death are under investigation by the Arson and Explosives Squad.’

Police are not treating the man’s death as suspicious. 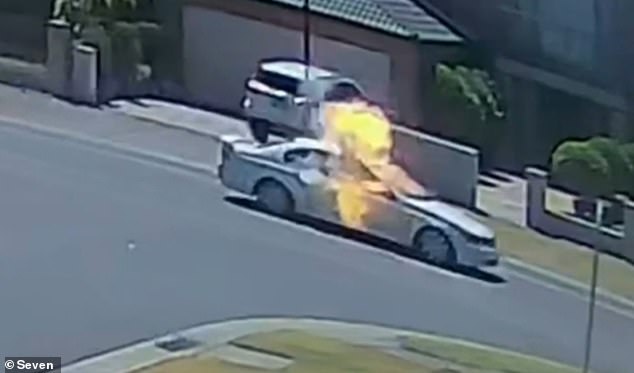 The drama unfolded within close proximity of an aged care facility.

One local resident who wasn’t home at the time at the crash posted on Facebook he was unable to return to his house until 1am the next morning.

“They had the streets blocked off and police pretty much controlling everything, there was 15 police cars all around the place,” a shocked neighbour told Seven News

Another added: “I just heard a big loud band at about 11am and I looked out the window and saw the car had gone through the roundabout and crashed into a sign,’

One woman told 3AW she saw remote-controlled robots being used to deactivate the items.